Forget Fall Out Boy's "Ghostbusters" theme — what would Kanye's version sound like?

Here are 5 artists who would make an amazing cover, and 5 who would be even worse than this Warped Tour hangover 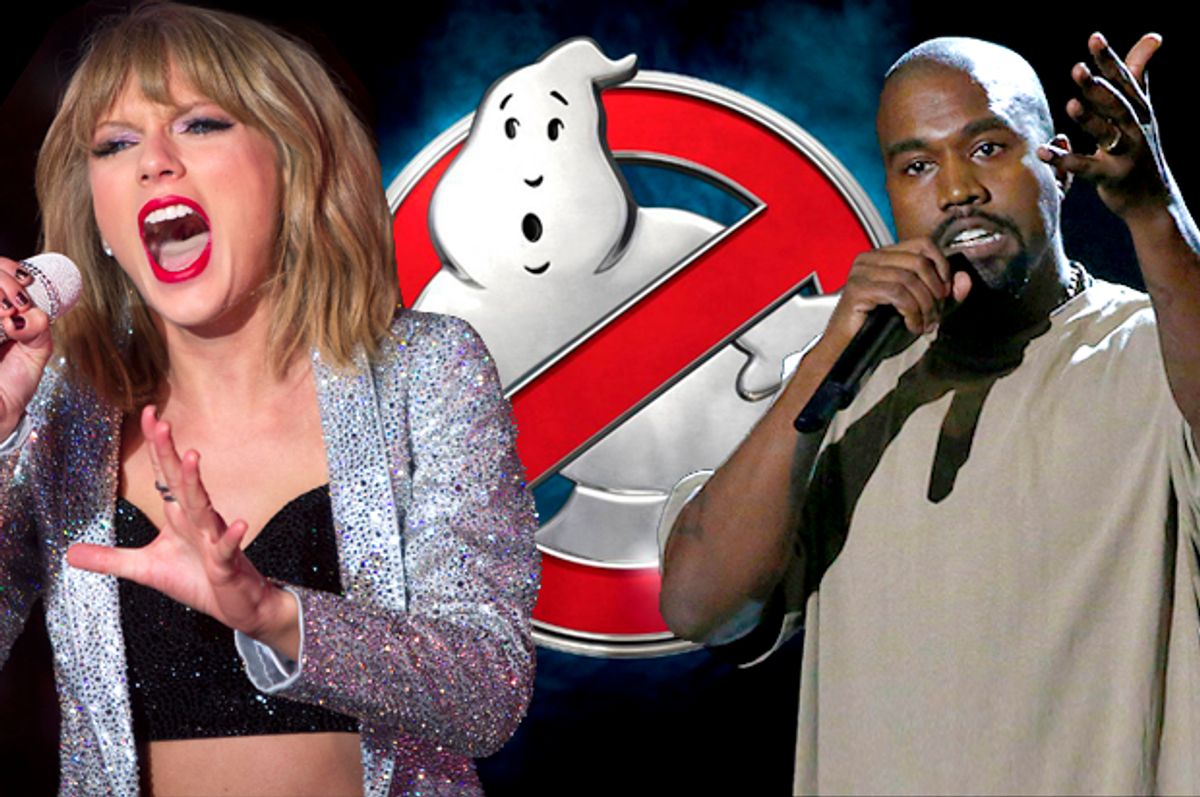 Well, that’s not quite what we were hoping for, was it? The new “Ghostbusters” has been championed by audiences intrigued by its feminist casting or excited by the direction of Paul Feig of “Freaks and Geeks.”

But the just-released theme song for the new movie – a cover, sort of, of the Ray Parker Jr. original by Fall Out Boy featuring Missy Elliott -- is pretty awful: It’s generic bombast without any humor or charm. It could be the theme song for any corporate action movie. Does it mean that the film will be less idiosyncratic than the original, angering an audience base bigger than the grumpy reactionaries who have already targeted it for gender reasons?

It’s all hard to call, a few weeks before the movie’s release. But here are five artists whose versions of the title song would be even worse than Fall Out Boy’s.

The song would be melodic and poised, but it would include an extra verse that made clear what a devoted friend Taylor was to all four of the ghostbusters, and how she would happily invite them onstage when she won her inevitable award for the song.

2. Huey Lewis and the News

The song would sound pretty much exactly like the Ray Parker, Jr. version, but blander.

Very similar to the Fall Out Boy version, but this band does its own rapping. Bombast quotient slightly higher, but just barely.

The piano man covers the song as a heartfelt ballad about the soul of the ghost. Imports his own lyrics from “Movin’ Out” so he can give the ghost a heart attack-ack-ack-ack-ack.

These guys, it seems, can do just about anything. But reworking early-‘80s synth-rock seems to be beyond them. Johnny Greenwood is in charge and stretches the song out to the length of the entire film, with Thom Yorke crooning over a minimalist string section.

Better to leave it to these artists instead:

Moody, slow, using several impossible-to-identify instruments, this cover would include cryptic messages about the state of West’s soul. Before its appearance in the movie, West would debut the song at an invite-only event at the Statue of Liberty. He will also try to change the name of the song half a dozen times, until Feig makes him remember that the song is a cover and he’s not allowed to mess with the title. West will tweet endlessly about his mixed feelings about his work on the song before deeming it the most importance piece of art ever created.

Melancholy and self-pitying, the song will include a very long digression about his breakup with Mandy Moore. Adams will exchange his signature jean jacket for a gray-and-orange ghostbusters uniform for the video.

The former Smiths leader would reunite with guitarist Johnny Marr for a shimmering, tuneful cover and a very long rant about vegetarianism. Highlight is Mozz tossing out, “I ain’t afraid of no ghost.”

Sung in her jaded Australian accent, Barnett will make clear she doesn’t really care whether ghosts show up or not. For the final verse, she’ll improvise a surreal stream-of-conscious story breaking up with a ghost who gardens.

Sinuous and understated, multi-layered and soulful, this one would be strong enough to make us forget how cheesy Parker’s original was. It will be his last release for 15 years.