Before her death, environmentalist Cáceres singled out Hillary Clinton for supporting the military coup in Honduras 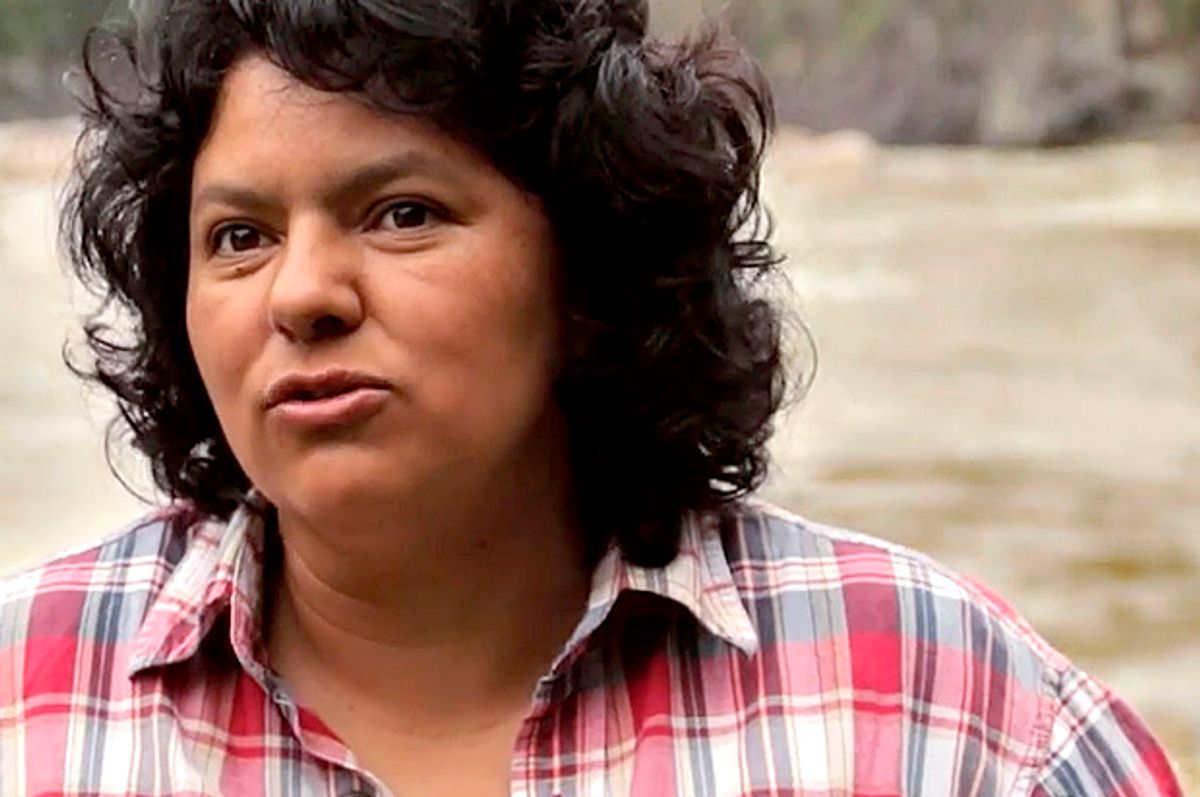 Renowned indigenous activist Berta Cáceres was killed by Honduras' U.S.-trained military, according to a former soldier.

Cáceres was gunned down at her home in March. The killers are not known, but activists who worked with Cáceres have insisted she was killed by the Honduran coup regime — which the U.S., under the leadership of President Obama and Sec. Hillary Clinton, helped legitimize.

A former first sergeant in the Honduran military told The Guardian that, months before her death, he saw Cáceres on a hitlist distributed to U.S.-trained special forces units. He said names and photographs of numerous activists were given to two elite units, which were ordered to kill the targets.

"I’m 100 percent certain that Berta Cáceres was killed by the army," said the 20-year-old soldier, who used a pseudonym, Rodrigo Cruz, for safety.

In May, Honduran authorities arrested four men in connection with Cáceres' killing. Two are part of the Honduran military, and two are linked to the Agua Zarca dam, the project Cáceres led protests against.

Amnesty International, however, warns that Honduran "authorities have done little to find those responsible or to set up measures to effectively protect other human rights defenders at risk like" Cáceres was.

As a leader in the indigenous Lenca community, Cáceres helped organize resistance to multinational corporations and environmental destruction. In 2015, she won the prestigious Goldman Environmental Prize for her work.

Before she was killed, The Guardian noted, Cáceres said she had received 33 death threats due to her leadership in the campaign against the Agua Zarca dam.

Honduras is the most dangerous country in the world for environmental activists. At least 109 were killed there from 2010 to 2015, according to Amnesty International.

In 2009, the Honduran military overthrew the democratically elected government of President Manuel Zelaya, a left-wing leader who challenged multinational corporations. Zelaya was woken up in the middle of the night, kidnapped and removed from the country.

Honduras' new government is violent, repressive and incredibly corrupt. Since the coup, hundreds of activists have been killed by the Honduran regime or private security forces, with almost complete impunity.

This has not stopped U.S. aid from flowing, however. Since 2010, the U.S. has given approximately $200 million in police and military aid to Honduras. The regime also benefits from the U.S.'s $750 million Alliance for Prosperity fund.

As secretary of state, Clinton played a uniquely hands-on role in supporting the coup. In fact, before her death, Cáceres singled out Clinton for blame.

Instead of pushing to restore the democratically elected president to power, Sec. Clinton pushed for elections immediately after the coup, in order to legitimize the military regime.

“We warned that this would be very dangerous,” Cáceres said in 2014. "The elections took place under intense militarism, and enormous fraud."

"The same Hillary Clinton, in her book 'Hard Choices,' practically said what was going to happen in Honduras," Cáceres continued. "This demonstrates the bad legacy of North American influence in our country. The return of Mel Zelaya to the presidency was turned into a secondary concern."

The passage in Clinton's memoir that Cáceres referred to reads: “We strategized on a plan to restore order in Honduras and ensure that free and fair elections could be held quickly and legitimately, which would render the question of Zelaya moot and give the Honduran people a chance to choose their own future.”

This passage was later cut out of the paper version of "Hard Choices," along with several other of the policies that make Clinton look bad.

But, although she may have tried to erase the evidence, Clinton could not erase the history. Protesters have repeatedly condemned the Democratic presidential candidate for her past policies, and have blamed Clinton for Cáceres' death.

"You killed Berta!", a protester shouted at a Hillary Clinton event in Los Angeles in May. Video of the protest was widely circulated on social media.

Tomás Gómez Membreño, who replaced Cáceres as the leader of her activist organization COPINH, said her assassination "has to do primarily with the capitalist neoliberal policies that are implemented by multinational corporations as well as national corporations."

"The atmosphere is terrifying"

Cáceres’ daughter, Bertita Zúñiga, told The Guardian that the Honduran soldier's confession "shows us that human rights violations are state policy in Honduras."

Rodrigo Cruz, the former first sergeant in the Honduran military, said that, instead of following the orders, his unit commander simply deserted. After that, he did the same, fleeing to a neighboring country.

"If I went home, they’d kill me. Ten of my former colleagues are missing," he said.

Cruz said the hitlist was provided to a military police unit in the Inter-institutional Security Force, or Fusina, which has been trained by U.S. marines and FBI agents.

He recognized numerous activists who were included on the hitlist. One of the targets is Vitalino Álvarez, a prominent member of the United Peasant Movement.

Álvarez has survived four assassination attempts since 2010. He told The Guardian, “There’s been a systematic strategy to eliminate the most belligerent social leaders. Since they killed Berta, the rumors are I’m now top of that list.”

When Cáceres was killed, fellow activist Gustavo Castro Soto was the only witness. He was temporarily arrested by the Honduran government, and has since said he fears for his life.

“It was clear that Berta was going to be killed at some point,” Castro Soto told Amnesty International. They had been on edge.

Cáceres' nephew, Silvio Carrillo, says the "atmosphere is terrifying" in the country. Less than two weeks after the renowned environmentalist was murdered, Nelson García, a member of the same indigenous rights group, was also assassinated.

In his training camp, Cruz said there were military advisers from the U.S. and its ally Colombia. Activists have compared U.S. support for the Honduran regime to its support for far-right death squads in the 1980s, which brutally murdered and tortured communists, socialists, labor organizers and even apolitical civilians.

While serving in the military, Cruz recalled having to empty black plastic bags full of body parts over a bridge. He also saw a torture room that was full of blood.

In Honduras, the "U.S. continues to support economic policies that are generating this exodus of people, as well as military and security forces that are involved in human rights abuses," Annie Bird, director of the Center for Political Ecology's project Rights & Ecology, told Democracy Now.

U.S. aid is fueling "organized crime and the interests that are generating so much instability and violence," she added.

Bird has joined many human rights and environmental leaders who have called on the U.S. to stop funding the Honduran military. Some U.S. lawmakers have even taken action.

Rep. Johnson told The Guardian, “We provide millions of dollars in security assistance to Honduras but these same forces have been found to attack and kill environmental, labor and human rights activists like Cáceres without any effective response from the authorities.”

Today, activists continue to invoke Cáceres' memory with one of her favorite expressions: “They are afraid of us because we are not afraid of them.”