Desperate to reclaim the narrative, the GOP nominee came out swinging Wednesday, sending PolitiFact into a tailspin 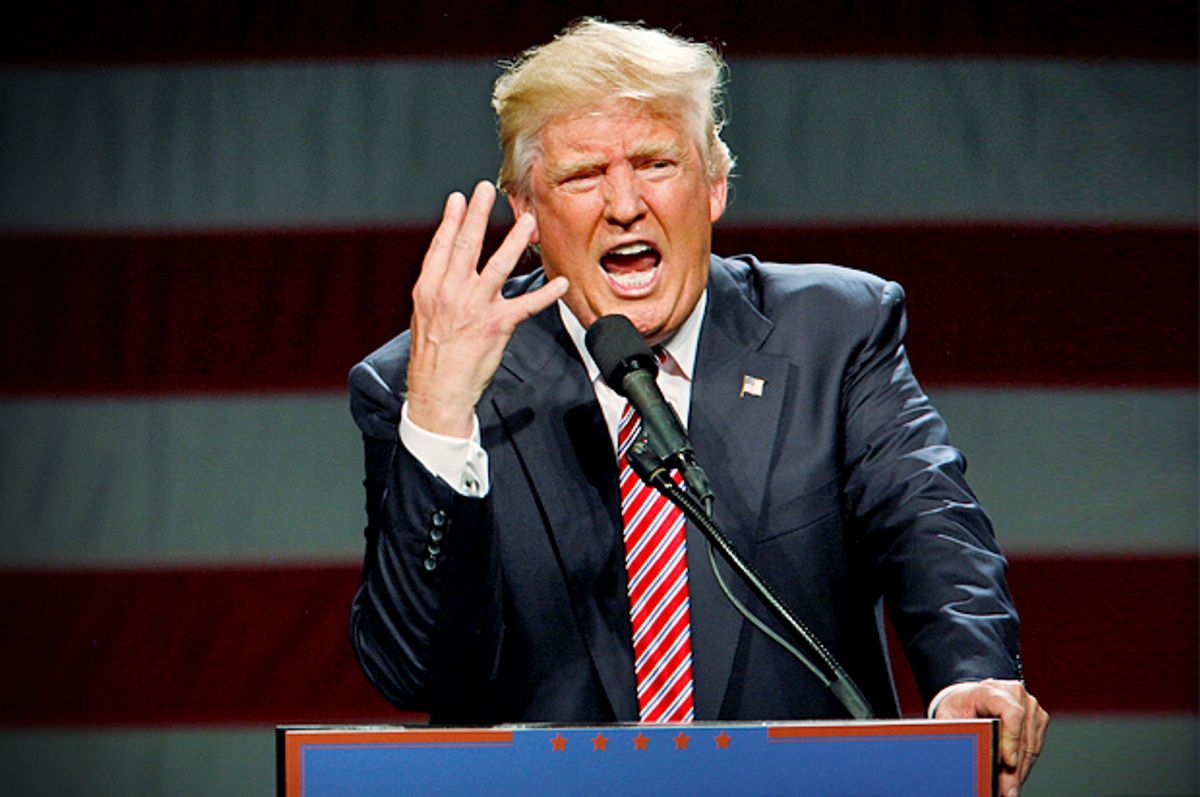 Donald Trump delivered a “big speech” at his SoHo New York hotel Wednesday, billing the event as a presentation on “the stakes of the election” and “the failed policies and bad judgment of Crooked Hillary Clinton.”

Less-than-stellar polling data has plagued the Trump campaign since last week, when a Washington Post/ABC News poll revealed the presumptive Republican nominee currently hovers around a 70 percent unfavorable rating among likely voters. Trump also came under fire for bragging about his superior foresight in “predicting” the massacre at Pulse nightclub in Orlando.

This week brought increased scrutiny around Trump, including the high-profile ousting of former campaign manager Corey Lewandowski, and a meager FEC report that suggests the Trump campaign is in immediate financial danger.

In an effort to reclaim the media narrative, Trump issued a blistering attack against Clinton, basing parts of his speech on yet another, apparently bogus, Clinton tell-all book, Clinton Cash, which as Media Matters reports, recycles "the debunked claim that Clinton failed to block the Russian purchase of American uranium mines after the Russian government donated to the Clinton Foundation and alleged that the Clintons 'cashed in' on Clinton’s role as secretary of state through speaking fees." Trump repeatedly referenced "Cinton Cash" throughout, even quoting text of the book in his speech.

Trump also referenced a similarly spurious book, Crisis of Character, written by a low-level Secret Service agent who described Clinton as "erratic and violent." It's no secret that Trump has a penchant for pushing conspiracy theories, but even this one incited a response from the non-partisan Secret Service organization Association of Former Agents of the United States Secret Service (AFAUSSS), which issued a rare denunciation of the book, criticizing the author for making “security harder by eroding the trust between agents and the people they protect.”

In his speech Wednesday, Trump continued his tirade against Clinton, accusing her of being “unfit” for the presidency (yes, you have heard that before). In typical Trump fashion, the presumptive nominee drenched his speech in lies and half-truths, peppering in factual statements where they benefitted him (which wasn’t very often). We broke down the five biggest lies in Trump’s taco salad of a speech.

“It all started with her bad judgment in supporting the war in Iraq in the first place. Though I was not in government service, I was among the earliest to criticize the rush to war, and yes, even before the war ever started. But Hillary Clinton learned nothing from Iraq, because when she got into power, she couldn’t wait to rush us off to war in Libya.”

This claim has been debunked time and time again. While Clinton certainly voted to authorize the war in Iraq, there is no evidence that Trump criticized it “before the war ever started.” In 2002, Trump offered tepid support for the war in an interview with radio host Howard Stern. Immediately after the invasion again, Trump told Fox’s Neil Cavuto the war “looks like a tremendous success” from a military standpoint.

Trump did speak out against the war in July 2004—a full 16 months after the war began. Pressed on these facts by CNN’s Jake Tapper, Trump promised to provide evidence of opposition to the war, saying:

“No, no, but I was against it from before it started. And if you go back and look at that interview, and I'll get it for you if you want, but that interview was substantially before the war started. It was the first time I was ever asked the question. And even that, it wasn't like, oh yeah, we should go in. It was a very, like yeah, maybe.”

Tapper told Trump he’d “love” to see evidence of Trump’s vocal opposition to the war. So far, that wish seems to remain unfulfilled.

The United States is “the highest taxed nation in the world.”

This claim sent the fact-checking gurus for the website Politifact into a tailspin, as the clearly exasperated social media manager posted:

Politifact ran the numbers on a variety of measurements for determining how the U.S. economy is taxed, comparing it first with advanced industrialized economies, and again more broadly.

Comparing taxation as a percentage of GDP (26 percent in the U.S.), the Organization for Economic Cooperation ranked us 27th out of 30 countries considered to be our economic peers. Politifact notes:

“Industrialized economies are the best yardstick, but U.S. taxation as a percentage of GDP ranks 12th from the bottom if you compare it with a larger roster of 115 countries.”

So, either way you analyze it, the U.S. is far from the “highest taxed nation in the world.”

“Under [Clinton’s] plan, we would admit hundreds of thousands of refugees from the most dangerous countries on Earth—with no way to screen who they are or what they believe.”

“I only want to admit people who share our values and love our people. Hillary Clinton wants to bring in people who believe women should be enslaved and gays put to death.”

Trump has mentioned the supposed gaps in screening potential refugees seeking asylum in the United States throughout the election. That claim has been debunked time and time again; the process to get a refugee to the United States takes about two years, and involves running names, biographical information, and fingerprints through federal terrorism databases.

Further, Trump’s claim that he wants “to admit people who share our values and love our people,” is a direct contraction to his proposal for a ban on all Muslims entering the United States, considering freedom of religion is one of the core values listed in the First Amendment to the Constitution.

While Clinton certainly has some explaining to do regarding her high-profile speaking engagements with Wall Street, she certainly didn’t spend her entire career focused on cash-grabbing. As the New York Times notes:

“Early in her career, Mrs. Clinton worked for the Children’s Defense Fund and as a lawyer for the House impeachment inquiry against President Richard Nixon, and later worked at the private Rose Law Firm in Arkansas, focusing on intellectual property and other cases. Much of her career has been devoted to government service, as first lady, United States senator and Secretary of State. But Mrs. Clinton did receive millions of dollars in paid speeches to banks and others and has served on the boards of corporations like Walmart. Mr. Trump argues that she also made money for big donors through her activities at the State Department and her family foundation, but he has not offered clear, convincing proof.”

Trump made this remark regarding Clinton’s assertion that while in Bosnia in 1996, she came under sniper fire upon landing. After video of emerged depicting Clinton and daughter Chelsea Clinton welcomed by a warm and excited crowd, the Clinton campaign said she “misspoke” about the dangerous conditions she faced abroad.

In his speech, Trump referred to the multiple instances of former NBC Nightly News host Brian Williams exaggerating the truth about the dangers he faced while covering the Iraq War. The businessman-turned-politician claimed Williams' career was “destroyed” for his fabrication, while Clinton’s is still in tact despite her lie. Of course, Brian Williams can still be spotted on MSNBC, where he serves as Chief Breaking News Anchor and Chief Elections Anchor for MSNBC. And considering Politifact rates 59 percent of all Trump’s claims as “False” or “Pants on Fire,” the Republican nominee may not get a lot of mileage out of this particular lie.