The real Wolf of Wall Street: Why Donald Trump is so popular with the richest investors

Top investors who back Trump don't care about the economy, they (wrongly) think he can make them richer 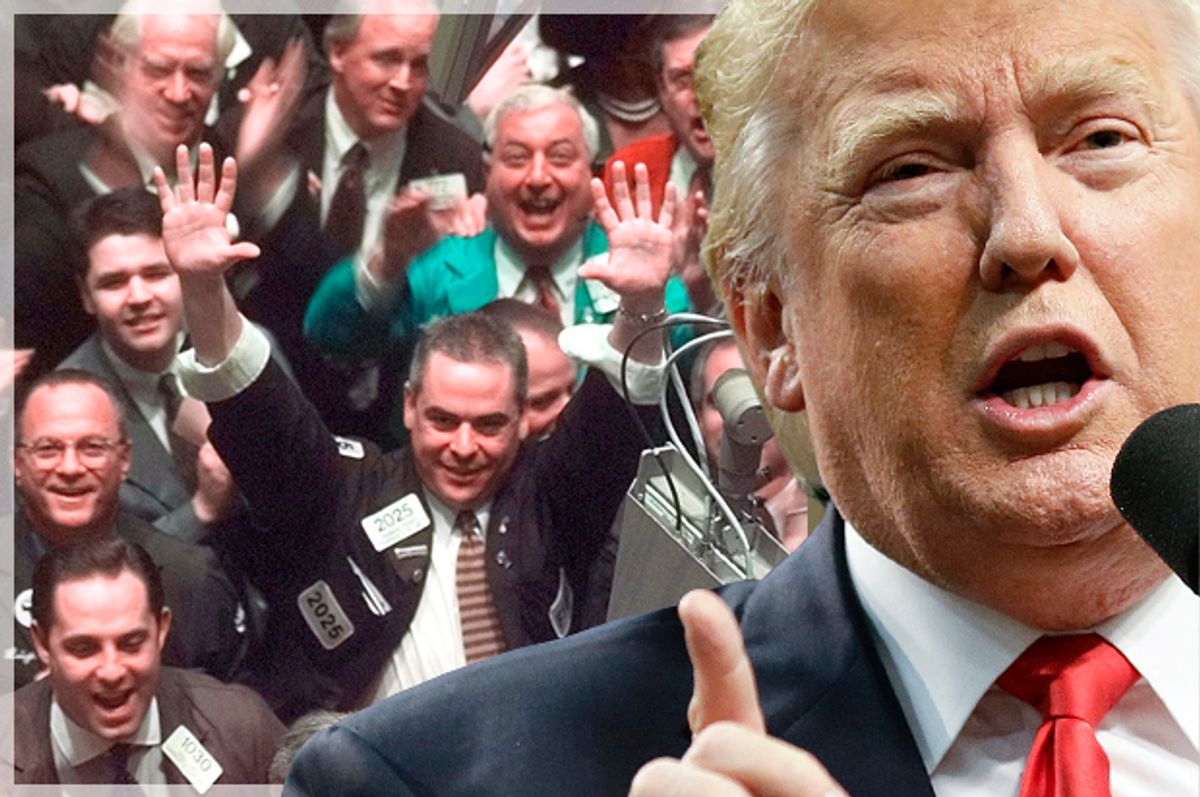 On Wednesday, hedge fund billionaire Robert Mercer, Ted Cruz’s former sugar daddy, announced that he had formed a Super PAC for wealthy Republicans who were too cowardly to own up to being Trump supporters. It’s subtly called the “Defeat Crooked Hillary Pac” and it being sold as a way for rich donors to contribute without having to sully their reputations by associating with that awful Donald Trump. Mercer  hired professional Clinton character assassin David Bossie to head up the project, which is perfect. His Clinton stalking goes all the way back to the 1990s with his organization called Citizens United. Yes, it’s that Citizens United.

One wonders who they think they’re fooling by pretending that trashing Hillary Clinton does something other than help Donald Trump but it turns out the donor class isn’t always as bright as they like to think they are. After all, as the New York Times pointed out in its big Atlantic City expose the other day, supposedly sophisticated Wall Street investors repeatedly gave Donald Trump vast sums of money which he squandered even as he personally made a fortune. It took four bankruptcies before they finally wised up that the man wasn’t a business genius, he just played one on TV.

Some still believe it.  Take this fellow quoted in Adam Davidson’s scathing profile of Trump’s business ventures in the New York Times Magazine:

Andrew Beal, a billionaire banker and investor, called me the other day to talk Trump. I had been leaving messages for every prominent business executive I could find who has publicly expressed support of the Republican candidate.

Before I could ask my first question, Beal told me he wanted to get something out of the way. He knew that I would ask about specifics. “Everybody wants to be real specific,” he said. But Beal’s support for Trump has nothing to do with specifics. He grants that he doesn’t know much about Trump’s policy goals or about whom he might choose for key economic positions. He doesn’t even think Trump knows. And that, he explained, is exactly why he supports him. “All these politicians with all these specific plans,” he said. “I think it’s total [expletive].”

His point was that business doesn’t run this way: If you’re hiring someone to be a chief executive, you don’t ask them to lay out every decision they’ll make, years ahead of when they’ll make it. You hire someone whom you trust, and you let them run things. Beal says he knows that Trump will do the right things to make the economy perform better. “You’re going to say, ‘How?’ ” he told me. “I don’t know how. I know that sounds crazy. That’s how the real world operates.”

That would be one of the so-called Masters of the Universe who allegedly keep the engine of capitalism working with their strategic insight and keen grasp of complex issues. When you read something like that you realize how easily all those rich investors got taken in by Trump.  It turns out they’re even more clueless than those poor dupes who ran up their credit cards to attend Trump University. They were dazzled by The Donald like everyone else.

And  he’s not the only one. Get a load of New York magazine’s Michelle Celarier’s rundown of the cast of characters who got together Tuesday night for a high-dollar fundraiser at Le Cirque in New York. It was hosted by hedge fund billionaire John Paulson and raised between five and seven million dollars:

The bigger gift among Paulson and his fellow hosts might have been attaching their names to the event in the face of a generally souring view of Trump — too erratic, too offensive — among the top ranks on Wall Street. At least in the case of Paulson, there may have been a business motive for supporting Trump: As of last July, the presumptive GOP nominee was an investor in Paulson’s funds at a time when others were fleeing because of poor performance. But whatever his reason, the hedge-fund titan is now officially part of the small band of financiers publicly throwing their support behind Trump — others include investors Carl Icahn and Wilbur Ross, Cerberus’s Stephen Feinberg, hedge-funders Robert Mercer and Anthony Scaramucci, and former Goldman Sachs executive Steve Mnuchin — even as many of their peers question whether doing so will prove to be reputational poison.

That’s a Wall Street wingnut rogues gallery with Anthony “The Mooch” Scaramucci (who I wrote about here) as co-sponsor of the event and Stephen Feinberg, a gun nut so extreme that he probably even scares Wayne LaPierre a little bit. And this was the event that reportedly brought Ted Cruz’s richest fanboy Robert Mercer fully on board the Trump train.

One wonders if any of them were shaken by this Moody’s analysis released on the day after the fundraiser:

"The economy will be significantly weaker if Mr. Trump's economic proposals are adopted. Under the scenario in which all his stated policies become law in the manner proposed, the economy suffers a lengthy recession and is smaller at the end of his four-year term than when he took office," the report said. "By the end of his presidency, there are close to 3.5 million fewer jobs and the unemployment rate rises to as high as 7 percent, compared with below 5 percent today. "During Mr. Trump's presidency, the average American household's after-inflation income will stagnate, and stock prices and real house values will decline."

That doesn’t sound like such a great America, does it?

Nonetheless, most investors are with Trump:

A Bloomberg/Morning Consult national poll on investment, tax and economic issues shows voters with money in the market pick Trump over Clinton, 50 percent to 33 percent, as the person they think will be better for their portfolio. Those with more than $50,000 invested answer the question almost identically as smaller investors...

"Donald Trump has made his business experience a key point in his campaign, and it seems to be resonating with voters," said Kyle Dropp, co-founder and chief research officer at Morning Consult, a Washington-based media and technology company.

Some of this is driven by partisanship with six in ten self-identified Democrats saying they’ll be for Clinton and six in ten Republicans for Trump. Indies split two to one for Trump. The big difference is obviously that there are many more Republican investors than Democrats.

It’s a bit mind-boggling how this notion that the GOP (even under Trump) is better for the economy continues in spite of so much evidence proving the contrary. By any measure, whether it’s the stock market, GDP, reducing inequality, unemployment, poverty or racial economic progress the country does better economically under Democrats. Of course, the really wealthy ones aren’t really concerned about the economy in general. Many of them, like Trump donor John Paulson make fortunes from other people’s misfortunes. (He made a killing on the mortgage meltdown in 2007 although now he’s down to his last 13 billion or so.) What they care about is their own tax rates and any regulations that may impede their freedom to gamble with the economy as they see fit. On that score, the Republicans are much more responsive to their personal needs and so is Donald Trump.

In fairness, there are many Wall Street types who are appalled by Trump even as they loathe and despise Democrats like Clinton and Obama for being mean and calling them fat cats and forcing them to adhere to some regulations after they crashed the world economy with their reckless gambling. They really would prefer a nice, easy Republican like Mitt Romney who wouldn’t have a slavering mob of left-wing populists breathing down the new president’s neck watching his every move for signs of favored treatment for the 1%.

Instead, they are stuck with Trump, a man so obnoxious and ignorant that even though he’s more or less “one of them” they recoil in horror at the prospect of supporting such a cretin.  Luckily, there will be vehicles like the “Defeat Crooked Hillary PAC”  available for them to express their dislike of both candidates without having to take responsibility for the result.