Rep. John Lewis and the other Dems who staged a sit-in in the House are the new heroes of the gun-control battle 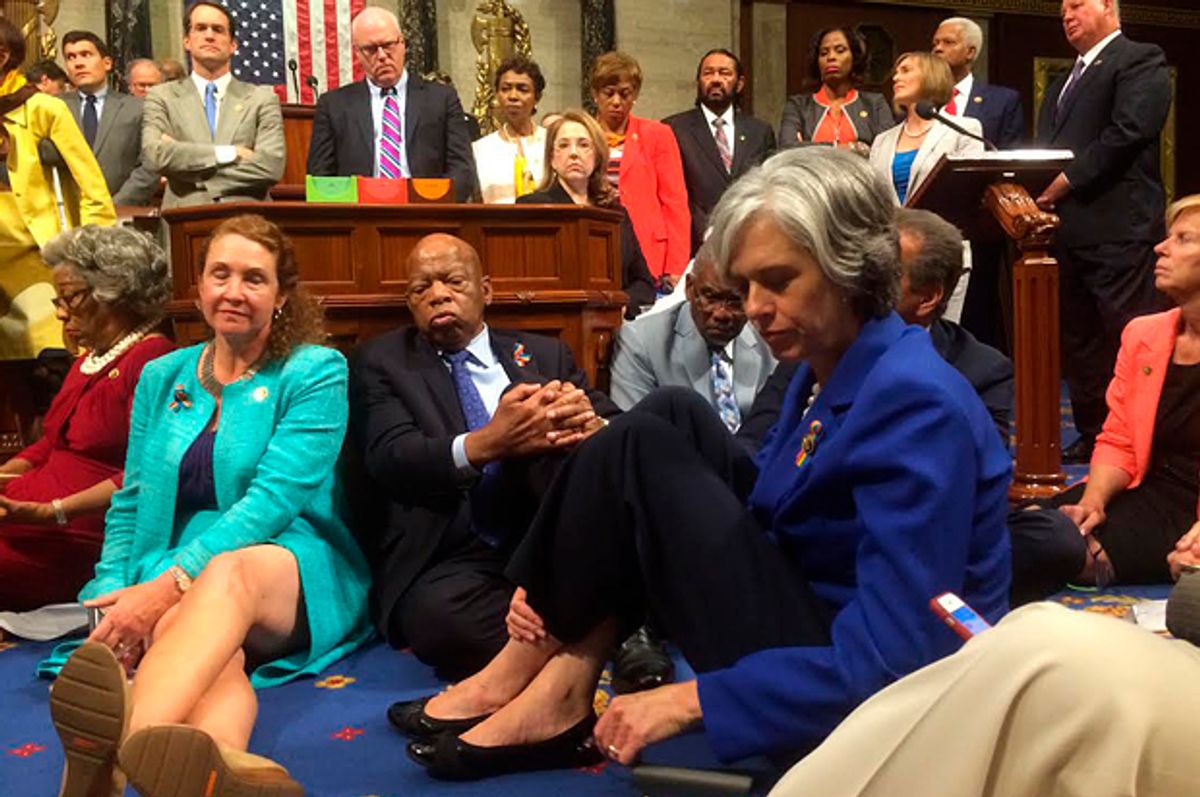 A relatively small group of House Democrats, including legendary congressman John Lewis, staged a sit-in on the House floor on Wednesday in order to coerce the Republican leadership to hold what will ultimately be a failed vote on new gun control measures. That's not to understate the importance of what the Democrats attempted, but if they really wanted to out-flank the Republican blockade, they could've simply sued the GOP leadership, which is both the favorite tactic of the Republican presidential nominee and precisely what the congressional Republicans have often done when faced with legislative hurdles from the White House.

In case you dialed up the proceedings on C-SPAN and noticed anything but the protest, you weren't alone. Shortly after Connecticut congressman John Larson declared, "Rise up, Americans, rise up, Democrats, we will occupy this floor," Paul Ryan shut off the TV cameras -- clearly because the Republicans aren't at all immature. The House Speaker seems to have forgotten about the existence of the internet and social media, which, cumulatively, far outpaces the C-SPAN audience, and the absence of live television only inflamed supporters online who witnessed firsthand the lengths to which the GOP will go to genuflect before gilded effigies of Wayne LaPierre.

Here's why the sit-in was so important, beyond any subsequent legislation itself.

The protest, as well as Chris Murphy's filibuster a week earlier, gave us a reasonably clear idea of which members of Congress are brave enough to rise up against the lopsided influence of the gun lobby and the NRA, and, conversely, which members of Congress are obvious cowards who'd rather defy the will of a supermajority of Americans who support new gun regulations.

Knowing the Republicans filibustered four gun control items in the Senate, you'd think the popular divide among American voters was similarly split, reflected in the roughly 50/50 cloture votes (53-47, 44-56, 47-53, etc). Contrarily, the same party that's nominated Pennywise the Clown for president even though he's despised by nearly everyone minus middle-aged white bros, defied the will of the people. Not a small margin of voters, mind you.

[S]upport for specific gun control measures was very strong, with 92% saying they wanted expanded background checks, 87% supporting a ban for felons or people with mental health problems and 85% saying they would ban people on federal watchlists from buying guns. Among Republicans, that number is even higher -- 90% say they favor preventing people on the terror watch list or "no fly" list from buying a gun.

More broadly speaking, the Republicans who continue to block the most innocuous gun regulations are doing the work of the NRA, rather than the work of upwards of 92 percent of the American people -- and 90 percent of Republicans. If we were unsure about this before, it ought to be abundantly clear today that the propagandists at the NRA wield staggering levels of power over the most exclusive lawmaking body in the world and a governing majority of its 535 members (both chambers). The NRA owns Congress. Sure, only half of all senators ultimately voted against extending background checks and so forth, but the fact that these otherwise relatively unobtrusive measures were the only bills that might've had a chance of passing indicates a broader epidemic of subservience to the gun lobby.

Speaking of the gun lobby, if you're still operating under the delusion that the NRA is all about protecting your constitutional liberties, stow it already. The unspoken mission statement of the NRA is to sell as many firearms as possible. It's an advertising front for the corporate gun industry, and the Second Amendment is nothing more than a convenient logline for selling as many retail death toys as possible to hunters, extremists, sportsmen and weekend military cosplayers alike.

Honestly, it's difficult to grasp why firearms need to be an intrinsic part of our Constitution and therefore untouchable as the sole product named in the Bill of Rights. The only legitimate reason it exists in 2016 is to provide a disproportionately sacrosanct, nearly biblical cover for the corporate, for-profit gun manufacturing industry. There’s simply no other use for it, especially within a document filled with timeless and fully legitimate human rights.

Put another way: the Second Amendment is no longer a necessary means of self-preservation, as perhaps it might’ve been in a rural, agrarian, semi-hostile, slave-holding, post-colonial America. Absent the wilderness hazards of the late 18th Century, it’s strictly become a means of protecting the availability of a retail product. Hardware. A hobby. Guns are a product that we don’t absolutely have to own in order for democracy and liberty to flourish -- and, in fact, owning a gun is statistically bad for you, that is unless you earn your living manufacturing and selling them.

Incidentally, and not unimportantly, if we’re going to protect any industry in America, one that manufactures a product or provide a service, then it’s difficult to imagine an industry that’s more important to our survival than healthcare. Sure, healthcare is mostly a for-profit industry, but so is the gun industry. One of the many differences between the two is that literally everyone needs healthcare to survive. Not so with guns. Under the current system, healthcare is expensive and costs are rising out of control. Guns are eminently affordable, and there isn’t an epidemic of bankruptcies due to gun purchases. Whether there’s a Universal Healthcare constitutional amendment, as proposed by Bernie Sanders and others, or whether the gun people are consistent and decide to support it doesn’t change the fact that the Second Amendment is anachronistic in 2016.

By the way, I’m not suggesting that all guns be summarily abolished. Like any product that carries certain dangerous consequences, I’ll concede that guns should still be available for purchase but regulated accordingly, not unlike automobiles, tobacco, liquor -- or healthcare. In terms of revising the amendment, I would suggest coupling the notion of constitutionally-protected firearm ownership with military service, assuring proper training and use of firearms. Plus, military service provides a specific and unquestionable need for firearms: combat in the name of national defense.