How to be a SoHo nanny and survive — just barely

We were paranoid and frazzled, constantly under surveillance, infinitely replaceable, and desperate for TV time 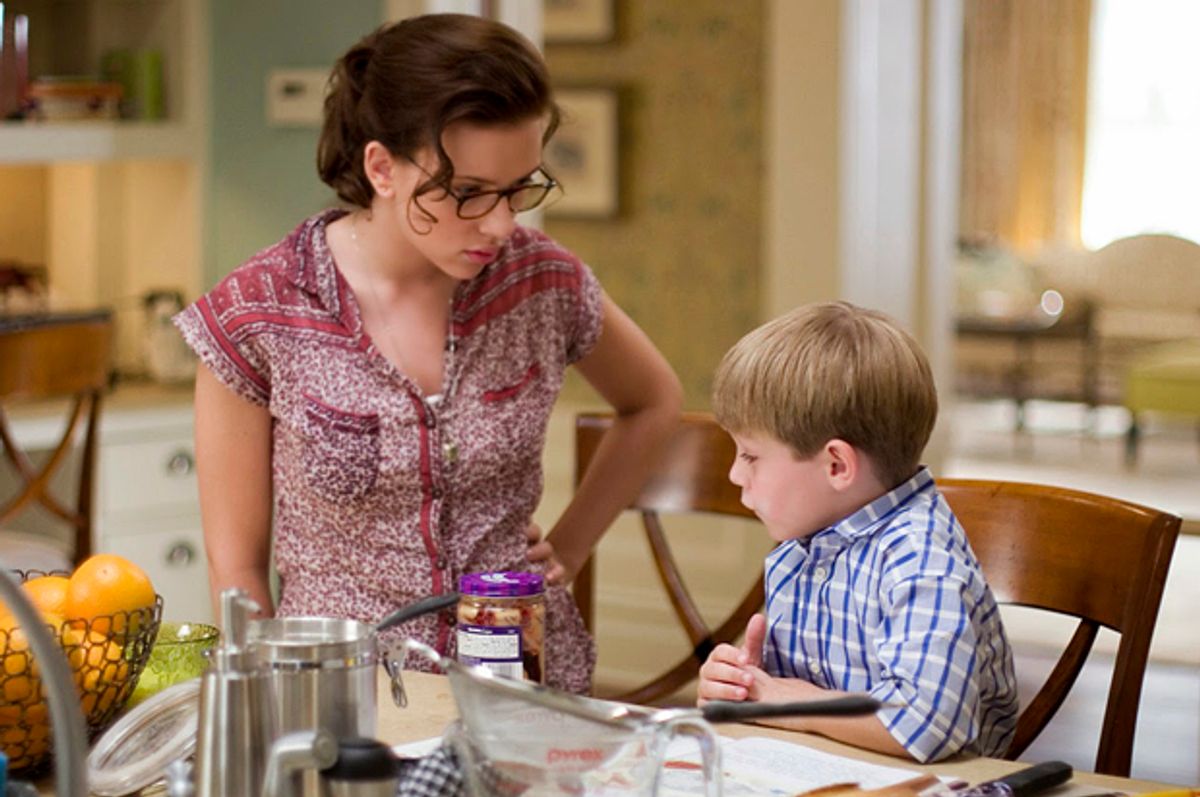 I was hired to replace the old nanny, who was too fat to climb the stairs. Soon, we would move into a new apartment with an elevator that wouldn’t work all summer. Imagine me plus a child who could barely walk plus a diaper bag plus groceries, climbing seven flights in the heat multiple times a day. It was hell.

My first day at work, I took B to music class. We stopped at the bathroom first. My boss had told me B was going through a phase where she hated the changing table. This was true. She writhed and kicked. I thought she’d fall off and die, so I set her feet down on the floor and put her hands on the wall, kind of like an arrest. I rifled through the diaper bag, but not fast enough. Something warm hit my leg. No. No no no, but yes. B had pooped on my thigh.

We joined the circle. All of the other nannies were Caribbean and texting. They recognized B. “Where’s Shauna?” they asked me. Shauna, I put together, was the old nanny. “She go back to Jamaica?”

I shrugged. I looked guilty.

A new nanny arrived. She saw B. She looked at me. “Where’s Shauna?”

B recognized Shauna’s name this time and screamed it in her broken toddler English.

“She wants Shauna,” the woman said.

All the women shook their heads at the same time, and then went back to texting. They were probably texting poor Shauna, who was at home, depressed, eating Fritos she could no longer afford. They were writing, “The new girl smells like shit.”

Days were long, sometimes 12 hours long. My boss was a very active person. She liked to be out all the time. I would have liked that, too, if my house were filled with children and caretakers and a cleaning lady I was constantly replacing. Not to mention the construction workers, because the apartment wasn’t done yet.

If she was out, everyone else should be out. This applied long after the construction was done. Employees were strongly discouraged from hanging out at home unless (a) your child was sick, or (b) you had thought of an extremely inventive crafting project, and even then, it would have to be raining for the boss to consider it.

But this turned out to be a gift, because being home was worse than trolling around Manhattan all day with your stroller. At home, the boss could appear at any time. She had a job, but not the regular kind where you have to show up. I’m still not even sure what her job was. And I didn’t care. All I cared about was when she was coming home. This was the constant riddle we nannies were trying to solve. There were four of us, plus one just for overnights, and a bunch of other guest stars. All day, we wondered, What is her ETA?

The boss was elusive with her facts, and I think it was on purpose. She wanted us to think that at any moment, she could pop out of the elevator. Every time that thing beeped, we froze.

Only the newbies would directly ask, “What is your ETA?” This was seen as intrusive, and why do you need to know? Are you doing something bad? Also, that text went unanswered 90 percent of the time.

So instead, we gathered in the blind spot near the fridge to exchange information. If she had told me she was getting a blow-out at noon, and she’d told Nanny 2 she might meet her to go to the park, which would be after naptime, around 3, then she would either be home around 1 or around 3. We debated in the quietest whispers, because some of us were paranoid that the cameras had sound.

Yes, we were being filmed. It wasn’t a Nanny Cam. It was for the art collection. When the cameras were installed, my boss’s husband said, “Don’t worry! We’re not watching you!”

But she was watching us, and we knew it, because she would text about things she could only possibly know from watching us. “Why is the architect there?” She had an app for the camera on her iPhone.

The worst thing was when you were in the blind spot, whispering about when she might come home, and then her phone rang. And then she picked it up! From her office perch in the corner, which you could only see if you walked all the way back there, and there was no reason to do that except to check on her, and then the cameras would see you checking on her! We’d mouth Fuuuuuuuck! What had she heard? What had we said?

We tried to track her by her footwear – her shoes were not by the elevator! Yay! – but she changed her shoes multiple times a day, so that didn’t work.

When we weren’t whispering, we were texting. You know that alien-face emoji on your phone? That was code for “boss.” Some of us also called her Fil, as in filbert, which everyone knows is the least desirable nut.

But wait. I should stop and explain. My boss was not a bad person. She was just a very stressed person, with tons of energy and maybe a little too much time on her hands. She also, I think, had forgotten what it was like to be a peon. Because she wasn’t born rich. She’d been a peon once, too.

Even though we often had no idea where she was, she wanted to know where we were all the time. And she wanted proof. Pics, pics, more pics! One of the nannies devised a brilliant plan. She’d go to the park in the morning and stage a bunch of pics – on the swing set, on the slide, in front of an unidentifiable wall – and then use the pics later in the day when the boss wanted pics. The trick, she told me, was to do it in the shade because the light in the afternoon is different. And you had to make sure your kid’s outfit hadn’t changed. If that happened, your pic was no longer usable.

But if it did work, you could conceivably be shopping at Bloomindgale’s while the boss thought you were at the park. This sounds conniving, and it was. The atmosphere of fear had turned us into conniving people. Every time the boss upset us, we charged another $10 green juice to her credit card. No, these were not for the kids. They were ours. We drank them in a vain attempt to cleanse the stress from our souls. The woo-woo nanny, in another version of that same vain attempt, put a black rock crystal in her bra before work. This was supposed to diffuse the boss’s bad vibes. Later, she was actually diagnosed with something by her doctor. I forget what it was, technically, but the cause was too much green juice.

We did our best, but nothing we did was right. The salmon you’d cooked for the kids was either undercooked or overcooked. Your outfit choice for her daughter was “dyke-y.” You were told that the stroller belonged in the corner, so you put it in the corner. The next day that was wrong. Why didn’t you know that it belonged in the hallway now?

The easiest part of the job was taking care of the kids, and I loved them. We spent so much time together; how could I not fall in love? Along with my PTSD, there are good memories. Of hours spent in Washington Square Park with B, who was scared of grass for a while and that was hilarious. Of feeding the older daughter watermelon and rubbing her feet; those were her favorite things.

The weather got worse, but the days didn’t get shorter. And they didn’t change either. For B, it was library, music class, eat, nap, eat, park, eat, park, sleep. For L, the older kid with special needs, it was physical therapy, speech therapy, and swimming lessons, followed by dinner out at a restaurant with a TV. Because that was the other goal: find a TV.

Have you ever been to the Scholastic store in Soho? If you’re a nanny in the area, the answer is yes. Because inside that store, there is the Magic School Bus, and inside the school bus, there is a TV that plays "Magic School Bus" episodes on repeat all day long. This is nanny heaven. Space is limited, so you might have to wait. Or, no, you’re too tired to wait. Just ditch the stroller (it won’t get stolen) and squeeze in. Have a green juice from the diaper bag. Not enough? Eat all your kid’s granola bars and Goldfish. This will sugar-shock you into waking up.

The school bus was the best, but we had other havens. Whole Foods Tribeca had a playground with foam blocks. Live music in Washington Square Park when it was warm could buy you 45 minutes on a good day. Or, you could just keep walking. Just walk and walk and walk until your kid falls asleep. Walk until the West 40s, or until the East River. Walk until the stroller kind of feels like a nice crutch, like a walker, and forget this is your job. And then remember, and take a pic, and keep walking in the hopes that you’d walk straight into a brand-new destiny.

We knew it was bad, but we didn’t know how bad it was until it was over. All of the nannies, and also the housekeepers, said they were going to quit on pretty much a daily basis. But.

By the end, I was insane. I had dreams about the diaper bag. I woke up in a panic. Had I bought the salmon? I’d be at home, doing something, and then I would realize I was performing a little. And then I remembered that oh yeah, there are no cameras here. I’d started smoking again. I’d reverted to my teenage self with those rebellious green juice purchases, and my alien emojis were obviously from the 4th grade. Someone was holding a lighter up to a piece of thread, and that was the thread I was hanging on by.

I did the honorable thing and waited until after my Christmas bonus to quit. I got the bonus, plus a very nice journal (thank you, boss), and then I went on vacation. I wrote B a letter about how much I loved her; she could read it in 10 years, or 20. L couldn’t read, so I would rub her feet for an extra long time before leaving. The day I came back, I said, “Soooo….”

My boss was totally cool about it. “We’ll find another one,” she said. “Maybe Shauna can come back, since we have an elevator now.”

Swan Huntley earned her MFA from Columbia University. She's received fellowships from the MacDowell Colony and the Ragdale Foundation. She lives in California and Hawaii. Her debut novel, "We Could Be Beautiful," will be out from Doubleday on June 28.