The Democrats' Florida fumble: Rep. Patrick Murphy is a disaster candidate that might help Republicans keep the Senate

The Democratic Party decided to recruit one of the worst possible candidates available in any state: Patrick Murphy 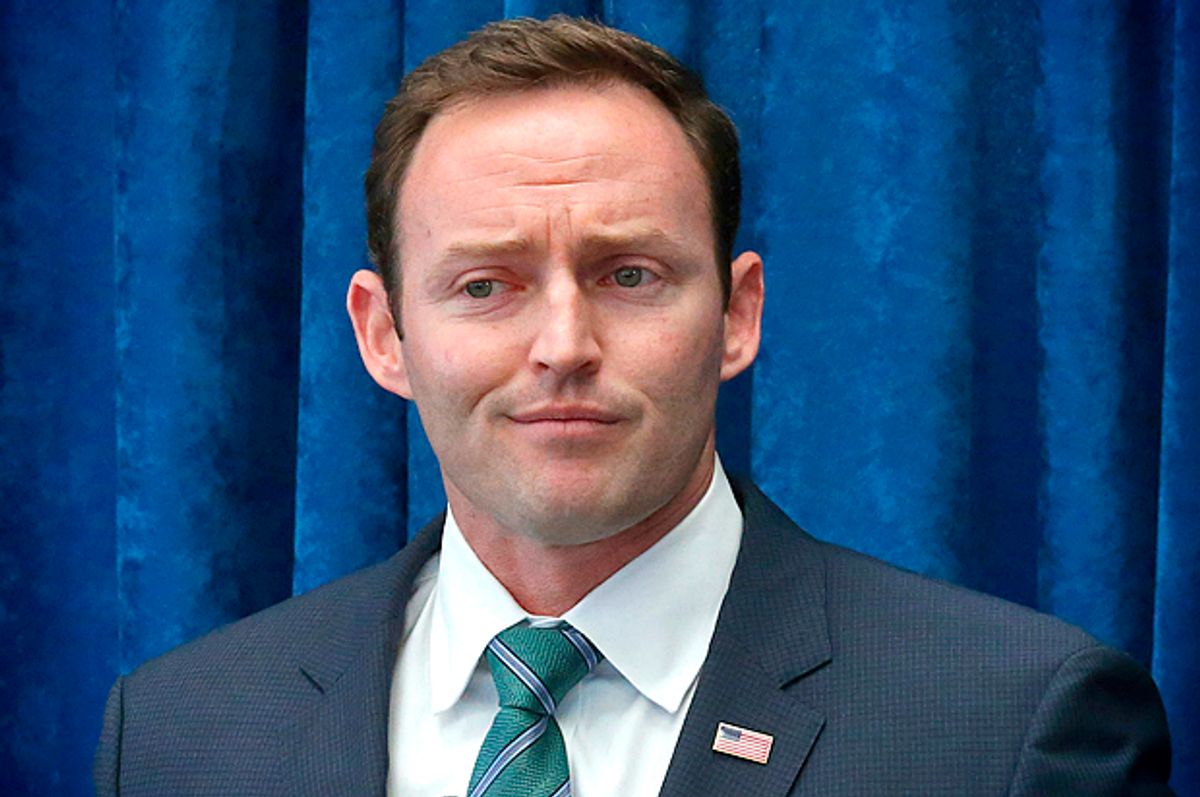 The American people really don’t like congress right now. Its popularity is only slightly above that of compost as a dessert topping. But in reality, what they really seem to hate about congress is the party they don’t belong to. According to the most recent Pew Poll, polarization is at an all-time high with members of both parties pretty much loathing each other. There are plenty of theories about what’s driving this, which we won’t get into here. (My personal belief is that the Republicans went completely nuts,

According to the most recent Pew Poll, polarization is at an all-time high with members of both parties pretty much loathing each other. There are plenty of theories about what’s driving this, which we won’t get into here. (My personal belief is that the Republicans went completely nuts, which is born out by data and not just by my own partisan biases.) But one thing each side can agree upon is that their opponents are simply insufferable:

If the last seven years are any example, it’s not going to be easy for either party to govern effectively in this climate without a majority in both houses of congress. The University of Virginia’s Center for Politics Crystal Ball forecast by analyst Larry Sabato shows that the Democrats are very highly favored to win the presidency with nearly 350 electoral votes and in ordinary times that might also usher in a congressional majority. Unfortunately, the Republicans managed to gerrymander the House so thoroughly that it will take an epic landslide for Democrats to win it back. It’s not impossible — the Trump factor may be instrumental in turning it over. But it’s a heavy lift.

The Senate, on the other hand, has long been considered doable and while that doesn’t solve the problem of that Blue Eyed devil Paul Ryan and his Tea Partying wrecking crew, it does mean something when it comes to things like Supreme Court judges and Executive Branch appointments. (And if the worst were to happen and, God forbid, Trump were to win the presidency, having the Senate majority could be the difference between simple dysfunction and total chaos.) It is a very important goal and one for which the Democrats have been preparing for some time.

There are a number of seats where Republican incumbents are vulnerable and a few open seats that could turn over to a Democrat. One of the most promising was Marco Rubio’s  in Florida which he pretended to vacate when he decided to run for president. He waiting until the last minute but finally jumped back into the race earlier this week. Apparently, he figured he still had plenty of time to make his fortune and he is clearly eyeing another run at the presidency.

His strategy seems to be to run against both Clinton and Trump which is an odd choice since that’s what he did during the primaries and it didn’t work out too well for him. The polling isn’t showing much enthusiasm among Floridians for more Marco in the Senate. Perhaps they weren’t impressed by his constant demeaning of the job, saying it wasn’t even worth showing up for --- which he rarely did. But he’s a familiar face now so perhaps he’ll just win by default.

The Democrats meanwhile went out of their way to recruit one of the worst possible candidates available in any state, Congressman Patrick Murphy a two-term congressman with a very wealthy and generous Republican father. The Democrats had persuaded Murphy to switch his R to a D in 2012 and he unsurprisingly went on to compile one of the most conservative records in the House Democratic caucus. He was even one of the chief Benghazi witch hunters enthusiastically helping Republicans smear Hillary Clinton.

In fact, it was rumored that Murphy was missing his old buddies in the GOP:

According to a source very close to the Republican Congressional leadership, Speaker of the House of Representatives John Boehner granted Patrick Murphy’s request to a private meeting to discuss Murphy’s possible defecting to the Republican Party.

For reasons unknown that didn’t happen and Murphy then became the Democratic establishment’s choice for Rubio’s seat. And what a terrible choice he was. Even before Rubio stepped back into the race it was very doubtful that Murphy could pull out of the nosedive his campaign has been in for the last month.

First, there were the stories of his dubious campaign contributions. It’s obviously the case that he became such a favorite of the likes of Senator Chuck Schumer and Harry Reid because he is a veritable money machine. And it’s a dirty one:

The Democrat has seen an avalanche of news headlines and political attacks in the last week surrounding: money his family-owned company and father gave to a super PAC that supports him; donations he received from an admitted felon; and a House bill he co-sponsored that would have benefitted political donors and his family business...

Murphy is the best-funded candidate in the race and his family wealth — or the contributions he took from big donors and Wall Street — didn't hinder him in past elections. He won his first election in 2012 despite media coverage of his father's pouring $550,000 into pro-Murphy super PACs, one of which ran attack ads against GOP opponent and then-U.S. Rep. Allen West. The ads generated controversy in District 18 as it depicted West, who's black, as a boxer punching white women.

(Yes, Alan West is a political extremist and a war criminal, but that’s still disgusting.)

This week the local Miami CBS station released a two-part investigation into Murphy’s financial conflicts and his ongoing lies about his education and his job experience in the private sector. It’s devastating. His claim to fiscal expertise lies with his alleged background as a CPA. Upon investigation, it turned out that Murphy repeatedly failed the Florida CPA exam and never worked a day in that capacity. His heroic tale of creating an innovative new type of “oil-skimming” boat, thoroughly tested by the government and found to be 100 percent effective, to help with the BP spill turns out to be false. Certainly, the government has no record of ever seeing one. The “small business” he brags about starting from scratch was actually affiliated with his father’s very successful construction firm. In other words, he’s an empty suit who doesn’t appear to have ever left his father’s nest.

It’s too bad Reid and Schumer put all their eggs in that basket and have been so dismissive of his primary opponent the firebrand progressive Alan Grayson, who polls just as well against the Republicans and isn’t as dumb as a bag of rocks. GOP Majority Leader Mitch McConnell’s former chief of staff was recently quoted as saying, “right now, I can envision a scenario where the balance of the Senate tips to the Democrats with the election of Alan Grayson. And I’m not the least bit kidding about that…Grayson could beat that entire field of Republicans.”

These investigations of Murphy’s shady finances and lies about his experience had eroded his chances anyway and now that Rubio’s back in the race, he’s in even worse shape. This was an unforced error by some powerful members of the party leadership who are still seduced by the idea of recruiting Republicans to switch parties under the mistaken impression that that will gain “independent” votes and keep the big money flowing. It could be a very consequential mistake. One Senate seat could make all the difference in January 2017.

There’s one group that’s very happy about all this: Republicans:

This is a gift from the gods. GOP will now hold the Senate and House.  Presidency would be nice, too. https://t.co/iMo7P52Bio