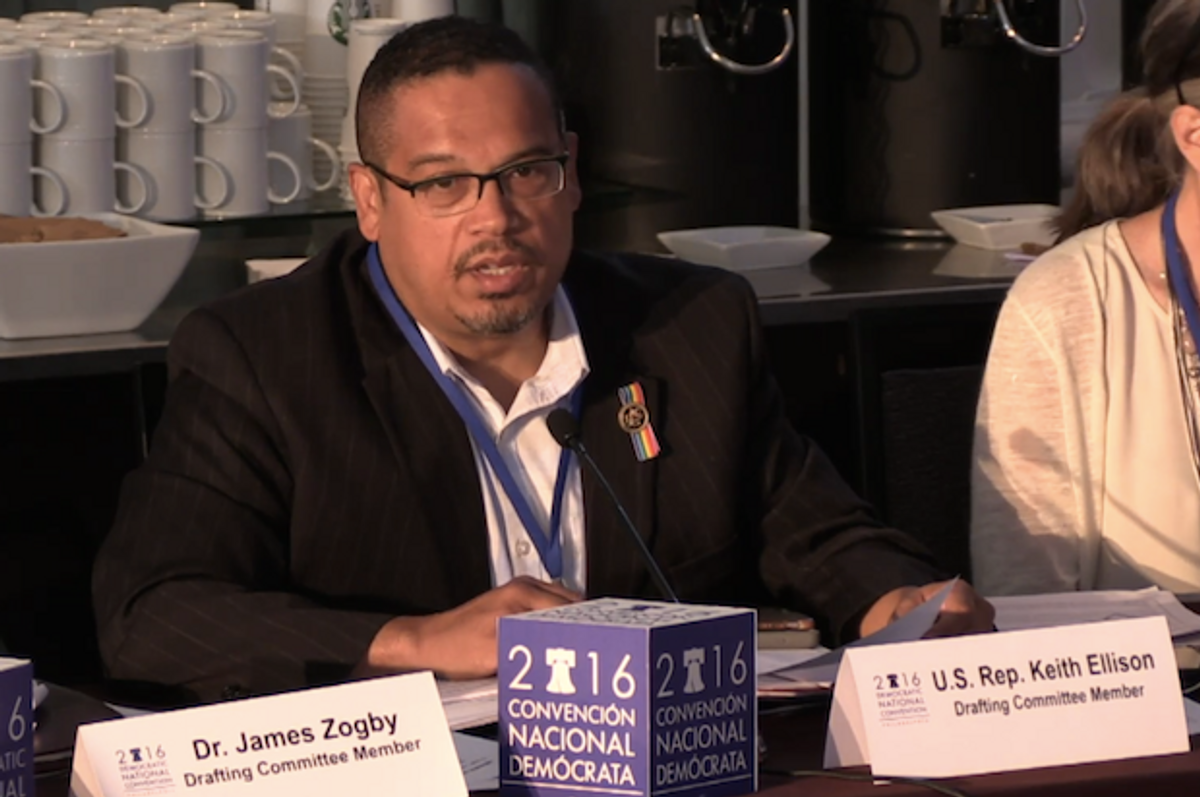 The representatives appointed by Hillary Clinton to the Democratic Party's platform drafting committee voted against a $15 minimum wage amendment on Friday.

The five representatives who were appointed by Clinton's presidential opponent, Bernie Sanders, supported the amendment.

The proposal was defeated eight-to-six. The only person on the committee aside from Sanders' surrogates who supported the amendment was California Rep. Barbara Lee.

The Democratic National Committee held a hearing for its platform drafting committee in St. Louis, Missouri on June 24. Video of the hearing is embedded below. (The discussion of the minimum wage measures begins at 59:40 in the video.)

On numerous proposed amendments in the hearing, Clinton's appointees voted together in opposition to Sanders' appointees, in what looked like a kind of proxy political battle.

Clinton's representatives argued the platform already expresses support for a $15 minimum wage, although the language is weak and offers no mechanism for getting there. Sanders' supporters called for the explicit demand of an indexed $15 federal minimum wage.

Rep. Keith Ellison, who was appointed to the committee by Sanders, proposed an amendment to the DNC's platform that would make support for a $15 per hour federal minimum wage absolutely unambiguous.

The platform originally simply stated that the Democratic Party hopes to "raise and index the minimum wage," with an earlier implication that this could be $15. Ellison proposed that the language be made clearer and stronger, changed from mere support to a demand to "raise the minimum wage to $15 an hour and index it."

The audience attending the public hearing applauded in response to Rep. Ellison's amendment.

"It's important to recognize that $15 an hour really is actually not even what the minimum wage would be if we indexed it from 1968. It would probably be upwards of $22," Ellison stressed.

"We are going through one of the worst periods of wage stagnation in our nation's history," he continued. Americans who are working on the federal minimum wage now, which is $7.25 per hour, are eligible for food stamps, section 8 housing and Medicaid, Ellison pointed out.

He also emphasized that it is important to index the minimum wage for inflation, "so that we don't have to come back every Congress to raise it again."

"One of the problems in our economy, and the reason we've had slow growth, is because the average working American doesn't have any money," Ellison said. "You can't spend money that you don't have."

Even small business owners are hurt by the low minimum wage, he stressed, "because their customer base is broke."

Deborah Parker, another committee member appointed by Sanders, backed Ellison's proposed amendment. She called the present federal minimum wage a "starvation wage," and emphasized that single parents cannot afford to work on the minimum wage and provide for their children.

Warren Gunnels, the policy director for Sanders, who sits as an ex-officio, non-voting member of the committee, likewise expressed support for the amendment. (In his introduction at the beginning of the hearing, Gunnels declared, "The political revolution continues," to applause from the audience.)

He praised fast-food workers fighting in the Fight for 15 grassroots campaign. Since 1968, the minimum wage has lost more than 30 percent of its purchasing power, he noted. "Millions of Americans are working longer hours for lower wages."

The Clinton surrogates in the room, however, opposed Ellison's amendment.

Paul Booth, an official in the AFSCME labor union who was appointed by Clinton, insisted "the language that we already have is exactly what we need."

Booth, who was wearing a Hillary Clinton pin in the hearing, claimed that vague language written in the platform just before Ellison's proposed amendment was already sufficient.

Ellison, however, wanted clearer language that explicitly states that the Democratic Party supports a $15 minimum wage.

While bringing up the specter of Donald Trump, Booth acknowledged the Fight for 15 movement and applauded the "gutsy" workers fighting for an increase in the minimum wage and the right to organize the union. Yet he still opposed Ellison's amendment.

Booth claimed the language suggests that the Democratic Party supports moving toward a $15 minimum wage, but added, "we affirm and support different ways of getting there in different states."

This comment appears to reflect the position of Clinton, who has said different states should establish unique minimum wages, some of which may be less than $15, depending on the standard of living, while Sanders has called for a $15 federal minimum wage that can be increased in more expensive states.

Ellison countered arguing that, if his proposed amendment truly were redundant, and didn't help clarify the party's exact position on the wage, "then there's really no reason to oppose it."

The five members of the committee appointed by Sanders — Ellison, Parker, James Zogby, Bill McKibben and Cornel West — joined Rep. Barbara Lee in voting in support of the amendment.

While still deliberating minimum wage policy in the DNC platform, Ellison subsequently proposed another amendment that would have called on the federal government to support a $15 minimum wage for federal contractors.

Clinton and Sanders surrogates butted heads even more aggressively on the language in this amendment.

Ellison called for supporting "a model employer executive order to ensure that federal dollars support employers who provide their workers with a living wage of $15 an hour, good benefits and the opportunity to form a union."

The U.S. federal government spends $1 trillion on contracts, loans and grants, Ellison noted. It spends more money than any institution in the world.

"That purchasing power allows the federal government to really shape what our economy looks like, in many ways. Do we want to create a race to the top or a race to the bottom?" he added.

Ellison condemned the "substantial privatization" of the Cheney era, which led to increasing costs eaten up by U.S. taxpayers. "We have funded more low-wage jobs than any other business in America, including McDonald's and Walmart combined," he lamented, calling for "reversing the Cheney trend."

Warren Gunnels recalled that President Obama raised the minimum wage of federal contractors to $10.10 per hour, and urged the committee to support an increase to $15 per hour.

Paul Booth, who went on to vote to table Ellis' proposal, claimed already existing laws would complicate the executive order, and proposed a more vaguely worded amendment in its place.

The two skirmished for a moment, with Ellison reiterating his question why, if they truly had the same effect, Booth would oppose his amendment.

"I would hope that who put us on this committee doesn't matter," Ellison said, in a tension-filled moment.

Rep. Elijah Cummings expressed hope that the members could better work together.

"I'd love to work with Mr. Booth, but I'm not picking up any spirit of cooperation from him," Ellison rejoined.

Eventually, after a break, the committee reconvened, and Ellison and Booth had agreed on new language for an amendment that was unanimously approved by the drafting committee.

Overall, Clinton's surrogates frequently claimed to be on the same side of Sanders', but opposed the addition of specific policy measures. Paul Booth insisted he prefers "general, in-principle language" that is not binding.

Another amendment proposed by Ellison, calling for stated opposition to cuts in workers' pensions, was supported by the Sanders camp, but was voted down by Clinton's appointees. (Chair Cummings accidentally voted in favor of it at first, thinking there was a tie he had to break, but he then realized that he had mistakenly looked over one of the opposition votes, and withdrew his support.)

Before the minimum wage vote, Ellison also proposed an amendment affirming opposition to the Trans-Pacific Partnership, or TPP.

He criticized TPP and NAFTA for contributing to outsourcing and wage stagnation. "They're actually not trade deals, really," Ellison said, pointing out that TPP provides measures that help corporations at the expense of average people, such as an extension of patents on live-saving medication.

After it was tabled, Clinton's camp later voted down the TPP amendment. President Obama has expressed enthusiastic support for the neoliberal global agreement, and Hillary Clinton lobbied extensively on behalf of it as secretary of state, although she claims to oppose it now. Bernie Sanders has steadfastly opposed it.

In the introduction to the hearing, Rep. Gutiérrez notified the other committee members that he would be missing the second day, as he would be leaving to lead a fight against the U.S. government's imposition of an undemocratic control board on Puerto Rico.

"I don't believe that I can be here promoting democracy while we have a control board that can meet in secret and make decisions about the future of 3.5 million people, with financing of the federal government," he said.

Gutiérrez compared the board the U.S. is considering to the one imposed on Flint, Michigan, which led to severe water poisoning.

Hillary Clinton supports legislation that would implement this colonial-style control board. Bernie Sanders opposed the legislation, blasting it as a colonial gift for Wall Street.

"So I'm going to go ahead and be there, and promote democracy there, in Puerto Rico," Gutiérrez continued.

"Because I too am against the hedge funds and Wall Street, and I don't think they should line their pockets at the expense of school children, and the elderly, and the sick."

The video of the hearing can be seen below.