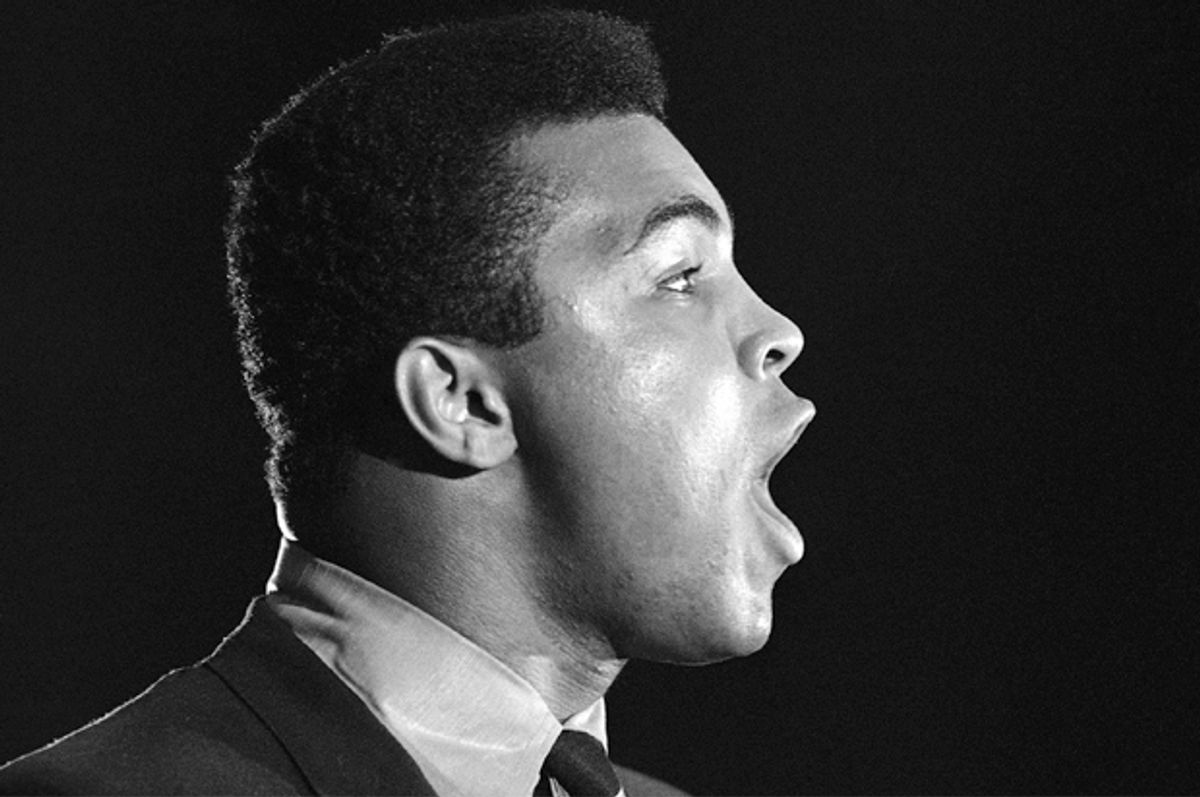 Last December, when Donald Trump proposed banning Muslims from entering the United States, he drew a verbal left hook from the greatest boxer of all time. “We as Muslims have to stand up to those who use Islam to advance their own personal agenda,” Muhammad Ali declared.

Ali didn’t name names, but everyone understood that he was talking about Trump. His remark was endlessly recycled after Ali died earlier this month, because it fit snugly into a good-versus-evil media narrative. In this corner, The Donald: crude, vindictive, and bigoted. In the other corner, The Greatest: kind, forgiving, and tolerant.

Ali's statement also blasted the "ruthless violence" of "so-called Islamic jihadists," which got trotted out again after the Orlando shootings. It reminded all of us that "true Muslims"--as Ali called them--abhor the kind of bigotry and fanaticism displayed by Omar Mateen, who murdered 49 people in a gay nightclub.

But that missed the most important story of Ali’s life, which was his own transformation into a man of peace. The youthful Ali was himself a chronic bigot and fanatic, rigidly attached to a corrupt religious leader. Ali moved beyond that, reminding us that human beings — of every faith and background--can redeem themselves from ignorance and prejudice.

If you think Ali wasn’t a bigot, Google his 1971 interview with British journalist Michael Parkinson. Ali railed against interracial marriage, which he likened to mating across species. “God made us different,” Ali insisted. “Listen, bluebirds fly with bluebirds.” Four years later, in an interview with Playboy, Ali suggested that interracial couples should be killed.

And if you think Ali wasn’t a fanatic, read the recent book about Malcolm X and Ali by Randy Roberts and Johnny Smith. Malcolm and Ali were fast friends, praying together in the dressing room before Ali defeated Sonny Liston to win his first heavyweight crown in 1964. When Malcolm broke with Nation of Islam founder Elijah Muhammad, however, Ali read Malcolm out of his life. “Muhammad taught Malcolm X everything he knows,” Ali told reporters. “So I couldn’t go with the child, I go with the daddy.”

That meant going with everything, which is precisely what a fanatic does. Turning a blind eye to Muhammad’s very un-Islamic adultery, including the fathering of children with several of his secretaries, Ali insisted that Elijah remained “The Messenger” of God. And Ali followed Muhammad’s orders to stay away from Malcolm, refusing to speak with him during their chance encounter in Ghana in May of 1964.

“Brother Muhammad! Brother Muhammad!” Malcolm called, as Ali walked away. Malcolm kept pursuing him until Ali finally stopped. “You left the Honorable Elijah Muhammad,” Ali said, glaring. “That was the wrong thing to do, Brother Malcolm.”

We still don’t know if Elijah Muhammad gave an explicit order to kill Malcolm X. But he certainly spread the word that Malcolm should die for his apostasy. And Muhammad Ali seemed to be fine with that, too. After Nation of Islam gunmen murdered Malcolm in 1965, Ali stood on a stage with minister Louis X—later known as Louis Farrakhan—and applauded, as Elijah Muhammad told a cheering audience that Malcolm was a “hypocrite” who got what he deserved.

To his credit, though, Ali changed. Like Malcolm X, he eventually renounced Elijah’s racial separatism and his crude idea that white people were, literally, devils. “The devil is in the mind and heart, not the skin,” Ali concluded. “We Muslims hate injustice and evil, but we don’t have time to hate people.”

Ali also came to regret how his mindless devotion to Elijah had poisoned his relationship with Malcolm. “I wish I’d been able to tell Malcolm I was sorry, that he was right about so many things,” Ali said. “If I could go back and do it over again, I would never have turned my back on him.”

So Ali’s story isn’t just one about the peaceful essence of Islam, which is mostly what we heard about after he died. It’s also a story of personal redemption from hateful versions of it. To be sure, Ali’s youthful bigotry didn’t carry the violent, apocalyptic edge of today’s Islamic jihadists.. But they clearly had elements in common: a rigid adherence to a charismatic leader, a deep intolerance of other peoples and faiths, and a fanatical certitude that God was always on their side.

“I am a Muslim, and there is nothing Islamic about killing innocent people in Paris, San Bernardino, or anywhere in the world,” Muhammad Ali declared, back in December. “These misguided murderers have perverted people’s views on what Islam really is.” Ali once subscribed to a perverted version of Islam, too, but he found the grace and the strength to overcome it. Our greatest challenge is to help today’s misguided Muslims do the same.