The stars aligned for Seth Meyers: "That was more dumb luck than anything else" 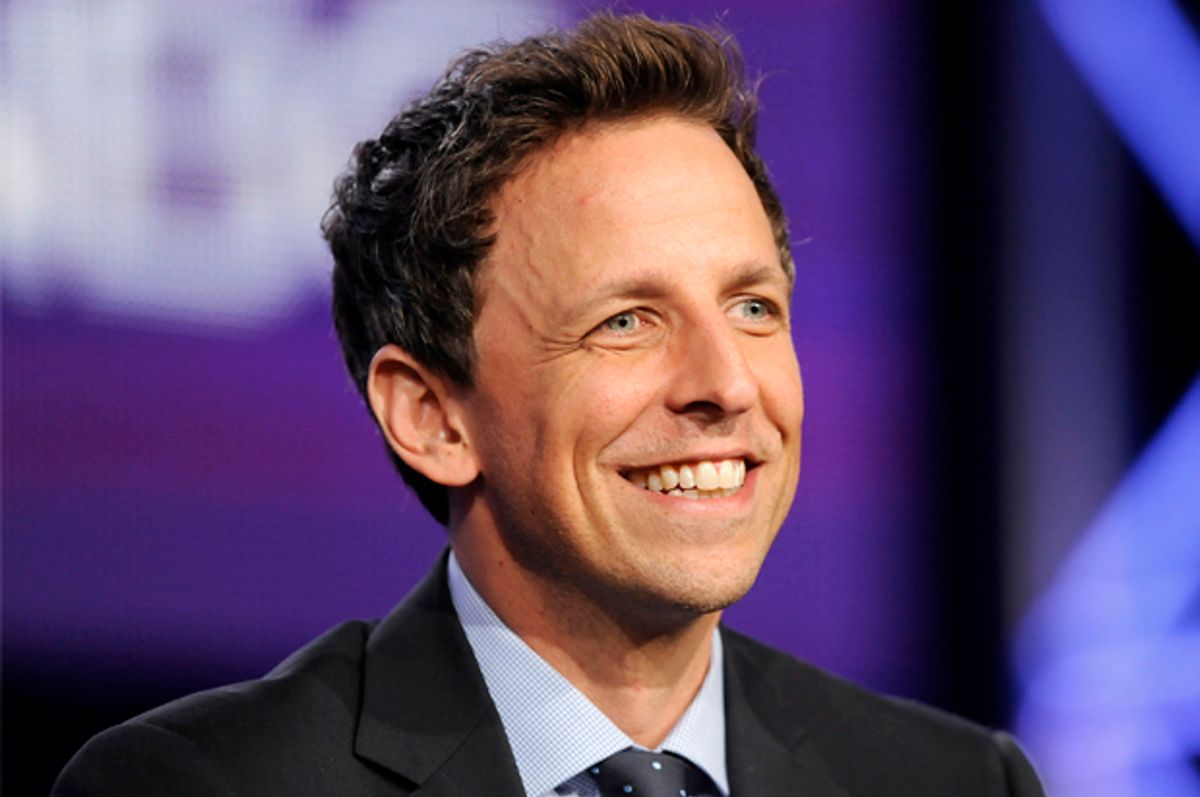 When it started, “Late Night with Seth Meyers” had a bit of trouble standing out from the rest of the late-night pack. But Meyers, a mostly amiable host who became well-known doing Weekend Update for “Saturday Night Live,” has lately emerged one of the most important political voices on television. Recently he has drawn attention for tackling subjects like the disastrous Kansas tax cuts, the Orlando shooting, the lawsuits over Trump University, and the candidate’s revoking of the Washington Post’s press credentials. (Meyers banned Trump from the show.) He’s not, of course, the only person on TV talking about these issues, but he approaches them with the right balance – both forceful and bemused -- that’s hard to attain.

With Jon Stewart gone from “The Daily Show,” the inconsistent political seriousness of his replacement Trevor Noah, and a presidential campaign becoming ever more unpredictable and troubling, Meyers has become gutsy and direct at just the right time.

We spoke to Meyers from New York City about the way he sees himself, his show, and his mission. The interview has been lightly edited for clarity.

You’ve been doing political humor all the way back to “SNL,” but it seems like recently these bits are getting more substantial, more pointed, and are being talked about more. I wonder if that’s just because the election is getting close, or if things are just so whacked out that the temperature is coming up everywhere?

I think everybody’s comedy compass sort of started pointing a little bit more towards this election as we realized what kind of election it was going to be, but it also kind of timed out with the evolution of our show. It wasn’t planned that way, but it was nice that as we were making the decision to go back to a format that was a little bit more reminiscent of Weekend Update it was also right around the same time that people were paying attention to the election. So that was more dumb luck than anything else on our part.

What about the weirdness of the election? We’ve lived through a bunch of elections, but this one seems to be stranger and wilder and more unhinged than usual. What does that do to the way a comedian responds to it?

Well, the only thing I’ll say is that 2008, working at “SNL,” that seemed to be weirder and more unhinged. Ross Perot certainly seemed weird and unhinged. So I do worry sometimes that we always think the present is as crazy as things can ever possibly get, and the reality is it’ll probably adjust to saner for years and then shoot back up to super-crazy eight years from now. With that said, sometimes we worry that we’re talking about the same things every day, but elections are important and this one certainly is providing a lot of things to talk about.

What has the departure of Jon Stewart done to the field? Does that change what somebody in your chair does?

I don’t think his departure changed anything we did. I think the fact that Jon did a show in the first place probably influenced a lot of what the shows are doing now, so I think it was more his presence that influenced us than his absence.

How did he change things? Did he make a certain kind of moral intensity or commitment possible?

I just think that when you look at where comedy was before Jon and before Stephen [Colbert], there was a lot less point of view. I think that makes it a really exciting time to do the kind of show that we’re doing, because there was an era not that long ago where I think people, to some degree, hid that and tried to keep the audience guessing. It’s a lot more fun to write and it’s a lot more fun to perform when your point of view is on display, so I think we sort of owe a debt to them because of that.

How high does the bar seem to be these days for political comedy in late night? How much do you pay attention to what the other hosts are doing?

I think we all have a high bar because we’re aware that we’re not the only people who are doing it any given night. With that said, I only kind of catch my colleagues in this field in snippets, and what I catch is always really impressive to me. It’s not like I go home and I’ve loaded up the DVR with everybody else’s shows, but the morning after you can always find people’s best work online, and everybody’s best work is pretty impressive these days.

Do you have a favorite of the other hosts? Or someone you consider a friendly rival of sorts?

The nice thing about this field is there aren’t that many of us that have these jobs, so it’s always nice to run into anyone. I know John Oliver fairly well, and every time he comes by the show it’s just fascinating to talk about the process and what it’s like to do these and how tired we are. Sam Bee came on right before her show started, but I’d be a lot more interested to talk to her now about how it’s all going, because I know that I did a lot of talking about my show before it started and I wonder if it turned out to be everything she thought it was gonna be, or what surprised her and whatnot. It is a friendly field right now, and I kind of am in awe of everything everybody else is doing.

Is there a trick to keeping political humor from being so serious that it’s not funny anymore? In a lot of cases you’re talking about dead-serious subjects: violence, handguns, wars. How do you keep the tone right when you do this stuff?

Well I think there are days where… After Orlando, we sort of made the decision, “Hey, let’s not worry about laughs per minute today.” With that said, that’s not the goal on most days. So there’s no real trick other than, “So we’re gonna explain this to people, and now if everybody could please pitch in for a joke that will finish the thought.” I feel like as long as you do that, you don’t drift into a place that I think none of us really want to be, which is too serious for comedy.

How much of the writing do you handle or oversee or change?

Certainly the main thing I realized [about] the difference of being on a writing staff like I was at “SNL” and having a writing staff like now, is you just get to choose the kind of writers that are going to be able to do things in a voice that you’re comfortable with. We have great writers who focus on things like “A Closer Look,” but those are always something where the morning of that show I’ll always go through those again and try to put it a little bit more in my voice and add jokes and whatnot.

But I think the most important thing you realize when you actually have to host these shows every day, and especially because we do them every day, there’s not a lot of time to sort of roll up your sleeves like there was at “SNL.” You could always pull an all-nighter or stay until it’s done, and here it’s a little bit more like a newspaper when you’re turning it out on a deadline. So I’m sort of learning to write faster, and even more importantly I’m learning to write when the sun’s out, because I didn’t used to do that that much.

We’ve seen Perot and various kinds of eccentricity in the past, but does Donald Trump seem to be the most despicable or the funniest candidate of your lifetime?

There was that Frank Rich piece in New York Magazine talking about how for a lot of people who are older than we are, Ronald Reagan was sort of this, you couldn’t believe it was happening. But I think for people our age, it’s so strange to have someone we were so familiar with for another thing become this thing that we thought what he had done up to this point would have disqualified himself. Again, I’m always a little wary to talk about Donald Trump in that I’ve been wrong about how this would go at every single turn. So I’m no expert and I don’t really know how it’s gonna end. I feel like he says so many things that it’s nice that you can make jokes about what he’s talking about, because what he’s talking about is actually very serious. I wouldn’t want to talk about him without being funny, but it’s nice that he provides that for us.

Is there anything troubling about him or does he seem mostly amusing?

Oh no, I think it’s very troubling. There are certain demographics in this country -- their lives have been negatively affected by the kind of campaign he’s running, and that’s very serious and sadly will probably endure past whatever outcome this election has. So that part of his message is really troubling, and there’s a lot of things he’s talking about that I think are very real concerns for Americans, and I think he has every right to talk about them. I just think one of the great shames has been his decision to appeal to those outer fringes, because there are so many decent Republican voters who agree with sort of 80 percent of what he agrees with. Our job is to draw attention to that outer 20 percent. I don’t think he’s representative of what a lot of the people who are registered Republicans stand for.

This whole race has been fun and frightening, but it still has five months left. Do you look forward to having the damn thing over finally?

We have a couple weeks off coming up and I’m really looking forward to that. I don’t want it to be fully over yet, but I do kind of need a break. Sometimes we question, “Hey, are we piling on here?” But at the same time, it’s not like he’s taking a day off, so if he checked out... maybe when he goes to Scotland we’ll give him a break. [Laughs] So I’m actually happy to be in a place where I can read some beach fiction as opposed to hanging on his every word.