All the president's friends: A history of close presidential allies, from Lincoln to Nixon to Trump

What can we learn about our presidents from the people they were closest to?

By Charles B. Strozier​ 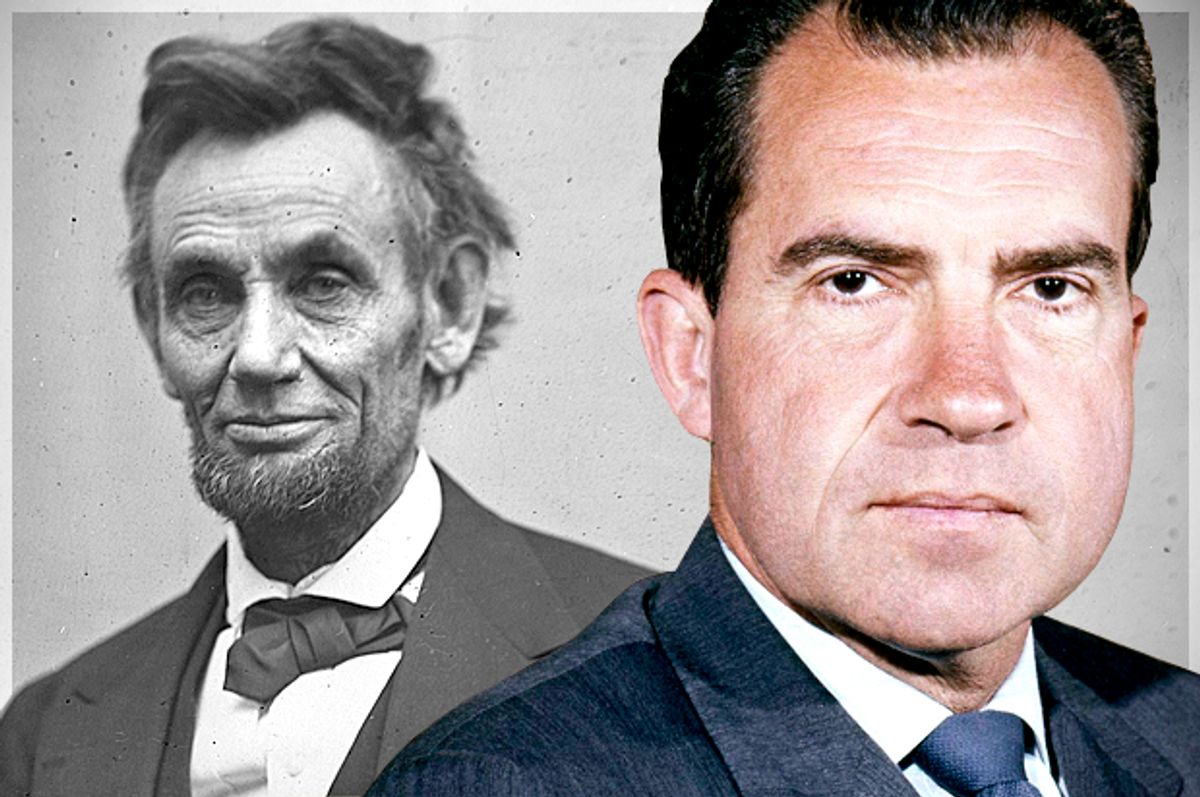 Facebook
Twitter
Reddit
Email
view in app
​Jonathan Mahler and Matt Flegenheimer in their New York Times article posted online Monday, June 20, reminded us of Donald Trump’s close friendship with Roy Cohn. Long reviled on the left, Cohn was Senator Joe McCarthy’s “Red-baiting consigliere” in the 1950s, was instrumental in sending the Rosenbergs to the electric chair, and helped get Richard Nixon elected. He later served Trump in many legal and personal capacities. Cohn liked to boast that he made Trump successful. There is probably no more despicable figure in American life from the 1950s to the 1980s.  Cohn was justly disbarred shortly before his death in 1986 for “unethical,” “unprofessional,” and “particularly reprehensible” conduct.

Cohn was also Donald Trump’s lawyer and probably his best male friend. For many years Trump kept an enlarged picture of Cohn on his desk.  Cohn, who could be equal parts fearsome and outrageous, handled Trump’s difficult legal issues by scaring off potential plaintiffs.  The two men went to baseball games, had lunch at “21,” and partied often.

It is a mark of the difference between the primaries and the general election that this kind of good investigative journalism by Mahler and Flegenheimer is now appearing.  Why wasn’t Marco Rubio, or Ted Cruz, or any of the other weak and intimidated Trump opponents looking into such things?

Most presidents need someone they can trust with whom to relax and share their real feelings about the extraordinary happenings in their lives.  Many, like George W. Bush, Ronald Reagan, Jimmy Carter, or Woodrow Wilson turn inward to their wives to play this role.  Who else, they seem to feel, can you really trust?  Richard Nixon’s special friendship with Bebe Rebozo, who was also corrupt, stands out as the exception, though Franklin Delano Roosevelt surrounded himself with male and female friends in a social world in which no one, except perhaps his mistress, Lucy Mercer, got close.

Then there is Abraham Lincoln.  Always somewhat aloof from his troubled wife, Mary, Lincoln turned for close friendship to a series of men who played a vital role in his life.  During the Presidency, no one was more important in this regard than Secretary of State, William Seward. But for many years before that Lincoln had a way of making his male friends all feel they were uniquely significant in his life, from men like Bowling Green or the Clary Grove boys in New Salem; to Orville H. Browning and William Herndon in his Springfield days; and to the shrewd, rotund judge, David Davis, on the 8th Judicial Circuit.

But no one mattered for Lincoln as much as his best male friend, Joshua Speed.  The two lived together from 1837 to early 1841, sleeping in the same bed above Speed’s store on the west side of the square in Springfield, Illinois.  Such arrangements were hardly uncommon at the time and all the (good) historical evidence suggests both men were heterosexual and sought relationships with women.  At the same time, both struggled with issues of intimacy and depression.

This friend helped stabilize Lincoln in his moratorium of delayed identity formation.  Speed’s imminent departure from Springfield in early 1842 threw Lincoln into a panic.  He was unmoored, alone, lost.  In that confused state, which he barely understood himself, Lincoln withdrew from his fiancée, Mary Todd, and broke off the engagement for his marriage that was to be on January 1, 1841.  After what he would call his “fatal first,” Lincoln became deeply and clinically depressed and definitely suicidal.  He took to his bed at the home of William Butler. His friends—Butler, Anson G. “Doc” Henry, and of course Speed--removed his razor and other sharp objects from the room and set up a kind of suicide watch.  Lincoln became wild and unhinged, hallucinated, stopped working, and became “crazy as a loon” in the words of Butler.

A year later, Speed’s own marriage to Fanny Henning elicited Lincoln’s vicarious identification with what emerged as Speed’s own doubts about his capacity to follow through with his marriage.  It was all quite dramatic, and the letters Lincoln wrote Speed at the time are by far the most personal and psychologically revealing of anything he ever wrote then or later to anyone.

But in the end Speed did manage to marry Fanny Henning, which seemed to free Lincoln to return to his courtship of Mary Todd, who had graciously waited for him to wrestle his demons to the ground.  After his marriage, Lincoln was never again suicidal, though he tended to the melancholy.

It is a remarkable story of a young great man finding himself.  He was saved by his smart, kind, honest friend, Joshua Speed.  Lincoln had no Roy Cohn whispering in his ear.

Charles B. Strozier, a Professor of History at John Jay College and the Graduate Center, CUNY, as well as a practicing psychoanalyst, is the author of Your Friend Forever, A. Lincoln: The Enduring Friendship of Abraham Lincoln and Joshua Speed (Columbia University Press, May 3, 2016)

MORE FROM Charles B. Strozier​