Claws for concern: Hillary Clinton is conveniently vague when it comes to animal rights

Americans more than ever are concerned about animal welfare, but it's hard to suss how much Hillary cares about it 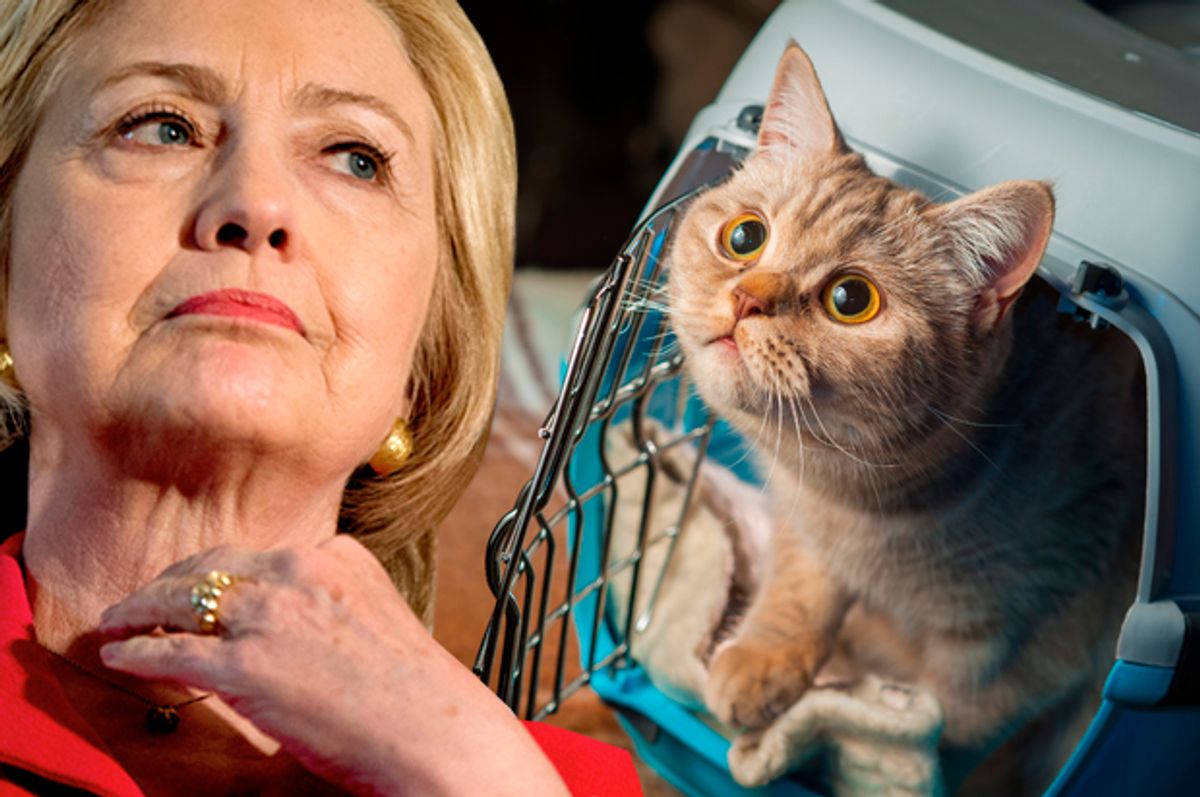 Democratic presidential candidate Hillary Clinton waits to speak at a get out the vote event at La Gala in Bowling Green, Ky., Monday, May 16, 2016. (AP Photo/Andrew Harnik) (AP/Andrew Harnik/photo_master2000 via Shutterstock/Photo montage by Salon)
--

Hillary Clinton’s campaign has wisely caught on to an evolving voter dynamic by crafting a position paper outlining her support for protecting animals. But is she for animal rights or for animal welfare?

In addition to being good policy, courting the animal protection vote is good politics. Americans’ concerns about humane treatment of animals is stronger than ever before.

If this trend continues – and there is no reason to expect that it will not – the issue will likely play an even larger role in future elections.

Evidence of society’s rapidly evolving focus on animal protection abounds. In March, SeaWorld announced that it will stop breeding orcas and will phase out its orca shows, which are its signature attraction. Last month Ringling Brothers put on what it called its last elephant show ever. Last year McDonald's joined Burger King, General Mills, Sara Lee and several other corporations that have announced they will only use cage-free eggs in their food products. In 2014 South Dakota became the 50th state to upgrade animal cruelty to a potential felony. Only 20 years earlier, all but a few states had only misdemeanor penalties for animal cruelty.

A 2015 Gallup poll addressing animal rights may be even more compelling. According to the poll, almost one in three Americans – 32 percent – now believe that “animals deserve the exact same rights as humans to be free from harm and exploitation.” In an identical poll Gallup conducted in 2008 only 25 percent of respondents expressed this view.

Clinton’s position paper does not go this far. It provides a vaguely worded list of mainstream animal welfare concerns such as “strengthening regulation of ‘puppy mills’” and “encouraging farms to raise animals humanely.”

The most interesting aspect of  Clinton’s position paper is its description of the candidate as having “a strong record of standing up for animal rights.” “Animal rights” is a loaded term, and even animal rights supporters cannot agree as to what it means. Some animal rights advocates interpret the term loosely, and view animals as already having some rights because laws exist to protect them.

But other animal rights supporters assert that animals presently do not have rights, because our legal system views animals as property and does not allow them to be represented in judicial proceedings. Highly publicized lawsuits are underway in New York seeking to change this for chimpanzees by demanding that they be considered “legal persons” for purposes of protecting their “bodily liberty” and their “bodily integrity.”

Advocates of animal protection who believe that granting animals legal rights would be treating them too much like humans, with potentially harmful societal implications, often describe themselves as “animal welfare” supporters. Perhaps Ms. Clinton decided to describe herself as an animal rights supporter rather than as an animal welfare supporter because most Americans have not thought much about what the concept of animal rights actually means, and because everyone likes rights.

As an “animal rights” supporter who has only articulated support for protections that fit within an animal welfare paradigm, maybe Clinton can have her cake and eat it too. To the majority of Americans who would probably not support granting legal personhood to animals, her animal rights language may be interpreted as simply caring for animals. But to the substantial and growing minority of Americans who express support for a more extreme interpretation of animal rights, Clinton’s use of the term may provide hope that she could be open to their views.

Another Gallup poll suggests that politicians can probably get away with vague platitudes about animal rights such as those provided by Ms. Clinton. In 2012 Gallup reported that only 5 percent of Americans identify themselves as vegetarians. Thus, approximately five out of six of the 32 percent of Americans who say they believe that animals should have “the exact same rights as humans to be free of harm and exploitation” eat those animals. Either these people believe that eating humans is also acceptable or they have some fuzzy thinking regarding what supporting animal rights equal to human rights means. I suspect it is the latter.

Donald Trump has not yet issued a position paper regarding animals. However, if he does not articulate a platform position on animals before the November election, he may make history as the last presidential candidate from a major political party not to do so. Four years from now the public’s concern for animal protection will be even more pronounced, although what animal rights means to politicians may not be any less opaque.

Richard L. Cupp Jr. is the John W. Wade Professor of Law at Pepperdine Law School. He is on Twitter at @cupprick.