The Kim Kardashian exception: Why her empire is constantly questioned—and Donald Trump's isn't

People reject Kim because she undermines the false belief that wealthy, famous people deserve their wealth and fame 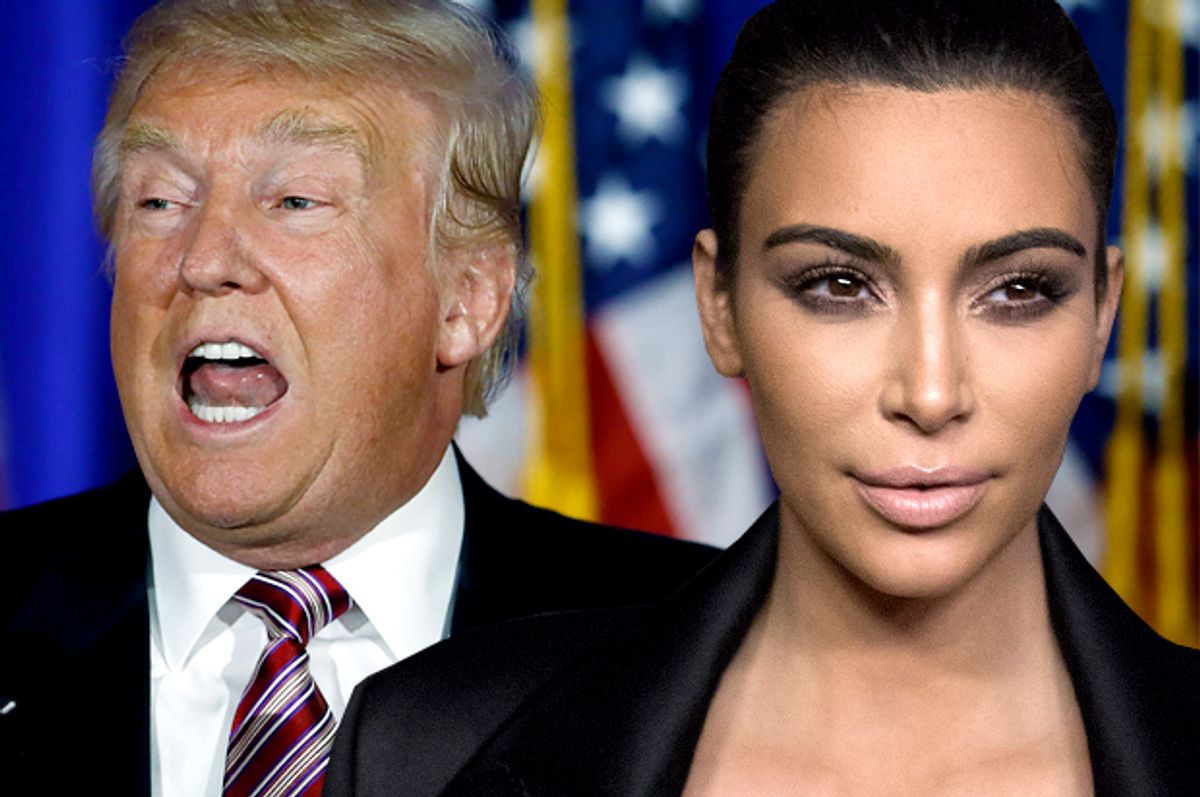 The most recent round of publicity surrounding Kim Kardashian and the popular app of the same name spurred yet another debate about whether such profitable products constitute achievements on her part, and whether she is thus worthy of our professional respect. Those who'd say “no” do themselves no favors in reverting to lazy condemnations of the Kardashians' best-known products, a series of reality television shows chronicling their lives. "Keeping Up With The Kardashians" is, of course, worthless entertainment. But it is merely the latest in a long line of stupid shows that are easy and somewhat pleasant to have on in the background. The same could be said of any number of other television programs that are not helmed by women, and that are not female-centric in their substance and marketing.

The strange vitriol directed at these particular stars and their fans is undeniably sexist. Football and boxing, say, are also immensely profitable, useless enterprises, enterprises whose fans also obsess to varying degrees of absurdity, which command a stronger emotional hold on their predominantly-male audiences than Kendall and Kylie ever could. And enterprises which, frankly, should face far more skepticism about their toxic effects on our culture from male media figures busy tweeting jokes about Kim's nude selfies.

People's amplified exasperation with Kim Kardashian's fame and wealth stem from a sense that she's undermined our conception of who gets, or ought, to be wealthy and famous. But this betrays a far more pernicious ideology: that Kim Kardashian is somehow an exception to a general rule that, by and large, good things happen to deserving people. This ideology, is, however, one that wealthy, famous people have a vested interest in promoting. In this sense, it is deeply irresponsible to grant subjects of reality television (or their mothers) producer credits, and thus control over a seemingly objective narrative. For a narrative is just that. It is a story. And stories are, by their very nature, lies.

With respect to Kim Kardashian, such storytelling might be relatively harmless. While it is inaccurate to dub her a successful businesswoman merely because a brand which bears her name has spawned successful businesses, the dangers of doing so are neither immense nor immediate. But for other such figures, the dangers are both vast and very real. A recent, gripping collection of anecdotes from former employees of Donald Trump's competitive reality show "The Apprentice" highlights these dangers. One midlevel producer describes an overweight contestant who “would fuck up week after week...But Trump kept deciding to fire someone else. The producers had to scramble because of course Trump can never be seen to make a bad call on the show.” (Upon discussing the matter with Trump, he told another producer his reasoning. “Everybody loves a fat guy. People will watch if you have a funny fat guy around,” he allegedly said.)

One named producer noted that he might be violating a non-disclosure agreement in sharing his disturbing tales, but felt responsible for falsely engineering an aura of competence around a man whose presidential candidacy has flourished. “We might have given the guy a platform and created this candidate,” he said. “It’s guys like him, narcissists with dark Machiavellian traits, who dominate in our culture, on TV, and in the political realm.”

Yet somehow, despite every indication to the contrary, many continue to believe that if people are rewarded for behaviors then those behaviors have inherent value to our society. This kind of circular reasoning has pundits tying themselves up in knots to give Trump credit for savvily exploiting our political system, when Trump has never given us any indication that he possesses any savvy at all. This default mode of thought plays right into his tiny, childlike hands.

Instead of viewing wealth and fame with this socially Darwinistic lens, as though they confer a vague sense of moral legitimacy upon those who attain them, we should instead recognize the distinction between benefiting from complex systems and deftly navigating them. Fortune, fame, and power don't necessarily imply skill. And assuming that traits which our markets, media, and political processes reward are necessarily admirable doesn't just normalize bad behavior (or no behavior at all). It lends credibility to markets, media, and political processes as arbiters of what makes behavior good. If the systems most fundamental to our society are elevating the hopelessly unqualified, then we must reckon with the fact that those systems are broken. One hopes they aren't hopelessly so.