Time to end these blood bans: U.S. policy on gay and bi male blood donations is a failure—and Canada is repeating the same mistakes 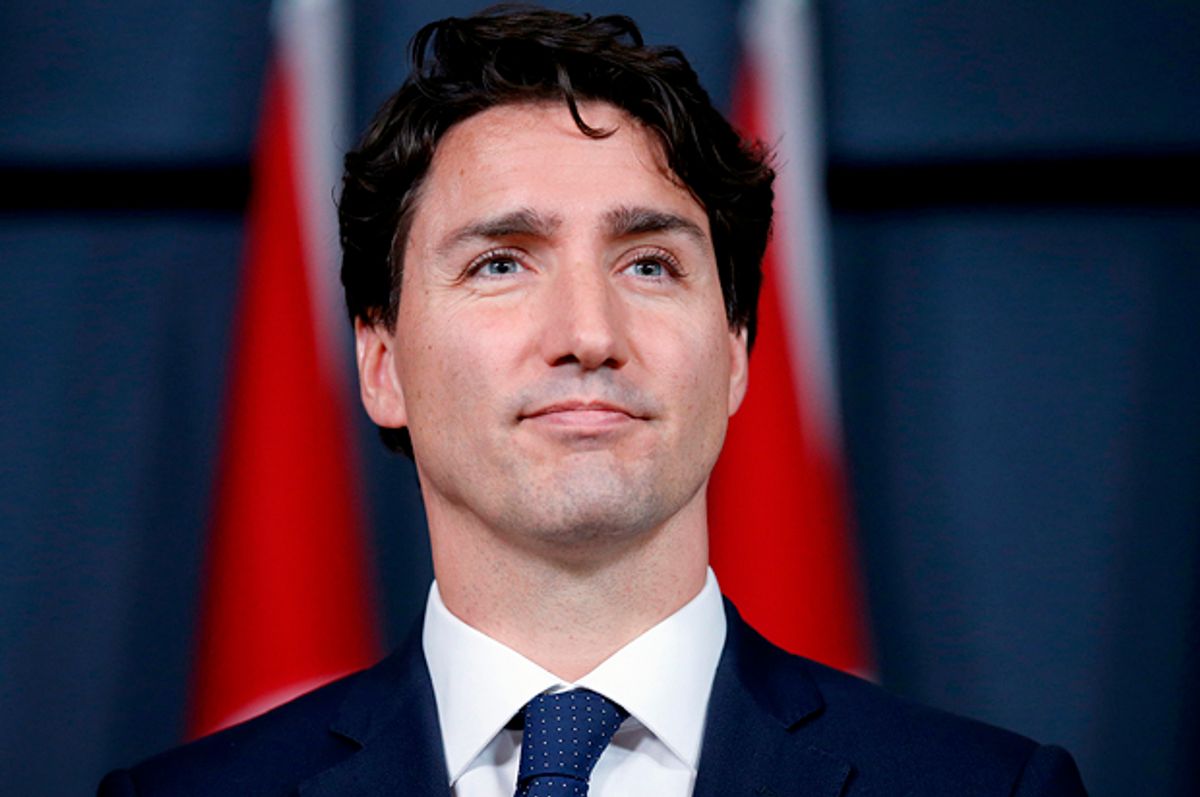 Canada announced this week that the country plans to significantly reduce the waiting period imposed on gay men who wish to donate blood. The current policy stipulates that any man who has sex with men (MSM) is banned from giving blood if he’s engaged in sexual intercourse in the past five years. But according to officials, that will be lowered to just one year.

The change was approved after Canadian Blood Services and Héma-Québec submitted proposals that would bring the Great White North in line with countries like the United Kingdom, Australia, Sweden, France, New Zealand, and the United States, all of whom mandate 12-month blood bans. “These proposals included scientific data demonstrating that the change would not result in any reduction in safety to recipients of donated blood,” a press release from Health Canada stated.

The U.S. barred gay men from donating blood entirely until December of last year, when the Food and Drug Administration announced that allowing MSMs to donate—just as long as they’ve been abstinent in the past year. While a step in the right direction, that decision has nonetheless been a disaster, a policy as scientifically bogus as it is symbolic. Under the new FDA policy, a vast majority of gay men remain blocked from blood donation, because they remain labeled as a “high-risk” population. Under current guidelines, it’s easier for gay men to buy assault rifles than it is to donate blood.

Although there were reports that the group was reconsidering the policy following the Orlando shooting, those turned out to be false. That heartbreaking scenario—following the shocking deaths of 49 people at Pulse, a gay bar in Florida—has become de rigueur for a community that’s dealt with decades of discrimination from health agencies.

Robert Voss, a 30-year-old teacher in Chicago, was told he was ineligible because he’s in a monogamous relationship with another man, with whom he recently adopted a child. Despite being turned away, the blood donation center continued to call him and send him follow-up emails asking him to give. “I got sick of explaining myself,” he told Salon. LGBT activist Brandon Yan, who has a partner, told the CBC that this is a “huge commitment” to ask of gay men who just want to help those in need. “We would have to forgo being intimate, and having sex, and all those wonderful things ... just to give this resource that is apparently so sorely needed,” he said.

If the Pulse shooting has exposed what an embarrassing failure the U.S. blood donation policies are, why would our neighbors to the North make the same mistake?

The case of Canada is extraordinarily unique when it comes to health policy. Over a span of about two decades, tainted blood made it into the general blood supply after thousands of donations were not screened properly by health professionals. This led to as many as 30,000 people, by some reports, becoming infected with Hepatitis C, while 1,100 more contracted the HIV virus as a result of industry malpractice.

Fallout from the crisis was extraordinary. Not only was the Canadian Red Cross—who was blamed for the scandal—fined $5,000 but the group additionally faced multiple counts of criminal negligence for exposing clients to disease, and a class-action lawsuit was filed in 1998. Dr. Roger Perrault, who then served as the director of the Red Cross, was put on trial for his role in the incident, but he would later be acquitted. Charges against the organization would be dropped, but backlash was so severe that the Canadian Blood Services was created to take the responsibilities of handling and testing blood away from the Red Cross.

That fiasco might explain why the country has been so slow to change. Canada first instituted its blood ban in 1977, and it wasn’t until 2013 that Canada allowed finally MSMs to donate. The change was ratified after a high-profile court case in which a sexually active gay man lied on his forms in order to be able to donate. He was sued by the CBS and counter-sued, charging that the policy was discriminatory and scientifically unsound. At the time, the Toronto Observer noted that HIV could be detected in the blood after just six months.

But 18 years later, advances in the health and medical industries that have made blood transfusion safer than ever, reducing the testing window to a period of mere weeks.

Diane Anderson-Mitchell, who serves as the editor in chief for PLUS magazine, told Salon that all donated blood has to be screened for a myriad range of infectious diseases, including Hepatitis B and Hepatitis C. Anderson-Mitchell explained that current technologies have made it simpler to test for HIV in the blood, which goes through a seven-day testing period, than these other viruses, which “take 25 days to screen for.” She said, “There’s this built-in safety factor right now with the testing we already do.”

The testing process for HIV is already extremely rigorous, as Anderson-Mitchell explained. Each blood sample is subjected to more than a dozen tests before it’s accepted. “When we know that blood goes through such long testing periods, you can really see that there’s plenty of time for them to test for all the HIV antibodies and antigens and know that blood is safe,” she said.

Magda Houlberg, who is the the chief clinical officer for Chicago’s Howard Brown Health Center, said that other models can be used to further increase that safety; she suggested waiting to submit the blood of “high-risk” populations to additional screenings. “When people donate sperm, they freeze the sperm and test you again awhile later and they used the sperm that’s been frozen,” Houlberg said. Instead, the current testing process relies on self-reporting, which can be extremely risky for blood donation centers.

“It’s more about the illusion of safety than it is about the reality,” Houlberg said.

Nonetheless, the risk of contracting HIV through a blood donation is already extremely low. The National Heart, Lung, and Blood Institute estimates the odds are just 1 in 2 million, and those are unlikely to increase by shortening the deferral period even further—or doing away with it altogether. Countries like Portugal, Spain, and Italy all assess the risk of donors on individual bases, rather than on blanket policies. Italy did away with its gay blood ban in 2001, as Vice notes, and “has seen no higher incidence of HIV transmissions as a result.”

Even the Canadian Blood Services note on their website that their own 12-month ban isn’t based on recent advances in medical science, stating that the “window period is only nine days.”

According to government officials, Canada’s policy change is designed to be incremental. Jane Philpott, who serves as the country’s Health Minister, called the decision less of a “radical change” than a “step in the right direction.” She told reporters, “There’s an incredible desire and commitment on our part of the government to further to decreasing that donor-deferral period. … The desire is to be able to have those deferrals based on behavior as opposed to sexual orientation.”

Canadian Prime Minister Justin Trudeau, who campaigned on ending the blood ban once and for all, has stated that doing so is a priority for his government. “A Liberal government will work with Health Canada, CBS, and HM-QC to end this stigmatizing donor-screening policy and adopt one that is non-discriminatory and based on science,” he said in an official statement.

Dr. Dana Devine said that—for now, at least—keeping the deferral period in place for gay men was designed to assuage the fears of those giving blood. “The 12 months was where we had data to be still in the comfort zone for the recipients to feel that we were not doing anything that made blood supply unsafe [and] that we also had data to reassure ourselves that we were maintaining safety of the blood system,” she told the Toronto Star.

But until they do so, a compromise plan simply won’t be enough to answer the needs of a community that’s tired of being scapegoated and shamed, even during times of tragedy.

John Paul Brammer, a contributor to The Guardian, explained that policies like the one in place in Canada and the U.S. are a reminder that gay and bisexual men are still looked at like “agents of disease.” Brammer said, “It’s not that different from the Nancy Reagan era of dealing with AIDS. It’s so unfortunate, but it’s being propagated not only among straight people in our society but among gay people, too.”

He pointed to an a recent ad campaign in New York reminding MSMs to “know their status” as unfortunate example of how stigmatized this community is, even in 2016. According to Brammer, one advertisement “shows a gay man having sex with an actual scorpion—like a man-sized scorpion, and the stinger was coming out behind him—about to stab him in the back of the neck.” He continued, “It’s comparing people in our community—people who we cherish and who we love, who might be our brother, and who might be our best friend—to a poisonous bug that might kill you, something lethal.”

If, Brammer argued, a culture of misinformation and a lack of affirming education on HIV helps spread this fear, the most important thing we can do to stop it is to repeal policies that only help to further that stigma.

In the U.S., 24 Senators and 115 House representatives have urged the FDA to strike down its blood ban completely. These legislators include Sen. Elizabeth Warren (D-MA), Sen. Bernie Sanders (I-VT), Rep. Katherine Clark (D-MA), Rep. Keith Ellison (D-MN), Sen. Chuck Schumer (D-NY), Sen. Barbara Boxer (D-CA), Sen. Dianne Feinstein (D-CA), and Rep. Jared Polis (D-CO). Polis, who is openly gay, sent a letter to the organization urging them to listen to the LGBT community, who have virulently protested the ban for decades. “They just need to hear the public outcry about this policy and move expeditiously to change it,” he told CNN.

Following the tragic attack on Orlando, gay and bisexual men aren’t just devastated. They’re angry, and they want do something about this horrific attack on LGBT people by giving to those in need. It’s time for countries like Canada and the United States to finally let them.