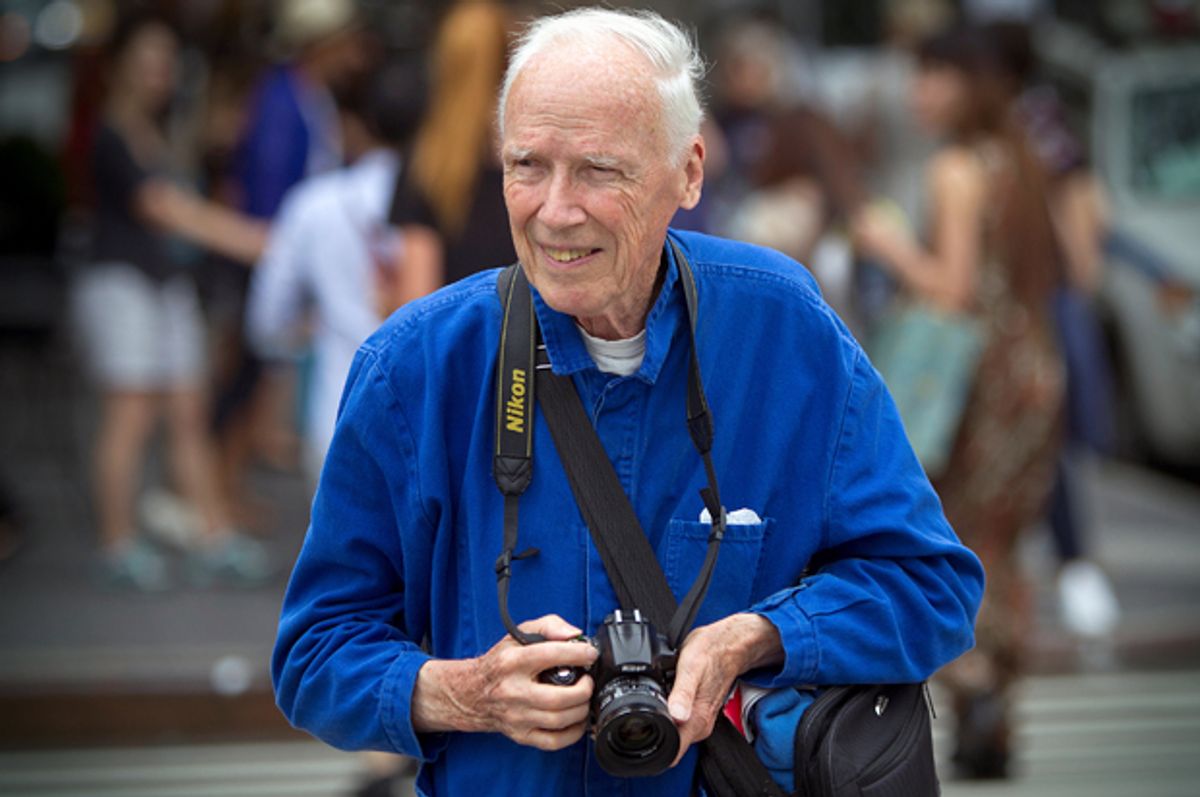 If you live in New York long enough, you are likely to find yourself having a perfect New York moment. Sitting in Central Park with a folded slice, as you watch the boats drift across the lake. Hearing someone say “cawfee” or walking across the Brooklyn Bridge at sunset. A moment that makes you stop and think “this is so New York.” A fleeting five minutes of your life that you’ll always remember.

I was in The New York Times Building to interview Art Director Richard Aloisio, whom I had met at a book launch earlier in the week. Richard, a style icon of menswear on Instagram, had agreed to be interviewed for my fashion blog. After we were done chatting he casually asked if I would like to meet Bill. Yes, just “Bill” — no last name was necessary. As a fashion blogger, the idea of being snapped by Bill Cunningham was the holy grail, the ultimate approval. As Anna Wintour has said, “We all dress for Bill.” The thought of meeting him and maybe even exchanging a word or two had me nodding enthusiastically, clapping my hands, and jumping up and down. Amused, Richard led me out of the meeting room and into the Art Department to search for Bill.

A cursory glance around the room—a sea of cubicles interrupted only by an elevator bank in their midst—proved fruitless, so we began running around the offices of the Art Department of The New York Times. We were searching for Bill Cunningham like "SVU"'s Benson and Stabler tracking down a perp. The department is scattered over different floors, and given that the streets of New York also serve as his workspace, Bill could have literally been anywhere. I had begun to lose hope and I was headed for the elevator back down to the lobby when the doors opened and out he stepped. Iconic blue jacket, camera slung around his neck and photos in his hand — it was Bill Cunningham, looking exactly like Bill Cunningham.

"Hi there, Richard!”, he said before noticing me. “Oh hello, young lady!”

“Hello, lovely to meet you!” I replied, beaming.

"Wow, what a terrific bird's nest hat!” he said, pointing to my head.

“You like it?” My smile grew from ecstatic to maniacal.

"Oh it's terrific, yeah, I love it! Your dress and all, that's lovely!"

I gave him a twirl.

“Oh that's beautiful, child. Is it warm enough for today?" (The coat in question, on a different day.)

Pointing at my hat again, which was actually a turban I had fashioned out of a scarf, Cunningham said, "But the hair, the hat—”

At this point he was studying my homemade head adornment, looking at it from different angles. He was trying to figure it out. I explained, “Yeah, I just made it out of a scarf—"

"You did? Oh it's lovely and the color, the solid background and the — it's fun. You're having fun with the stuff. That's what it's meant to do," he said. "Today, everyone takes it so serious, like it's some kind of gospel, instead of just having fun with it. It's like when the kids go out to Governor's Island, for the vintage dance, I mean there's a little core group of maybe fifty that are really into the authentic dress, but the rest are just having fun. It's lovely."

He was right, of course. Fashion should just be fun, but somehow along the way it has become a loaded, stressful and corporate concept. The pressure put on men and women to look a certain way is perhaps more heightened now than it has ever been. Yet here was a man who was going against all of that and was only excited by an authentic expression of personal style. His self-created career as fashion anthropologist has turned the cameras away from the red carpet and around to those who stand behind the velvet rope.

Bill’s love of the eccentric was what first captured my imagination and drew me to his columns. When I first discovered "On The Street," I was brand-new to New York, freshly arrived from London and very much aware that I knew no one and nothing of this strange new culture in which I found myself; I was an outsider looking for my way in. He was an outsider who was inclusive of everyone. He stood in the center, but was always looking out. To say that he was in the business of fashion is like saying Iris Apfel was in the business of dressing — his work was about so much more than that. This was the business of style. He showed little enthusiasm for celebrities preened by teams of experts, and was instead much more excited by the genuine self-styled fashionistas of the streets. He just wanted you to have fun with it. Fashion is a serious industry. Huge amounts of money and ego abound, but style—style can be fun. That can be expression. It’s art that is built on the canvas of a body in the morning, only to be discarded at night as the apartment door shuts behind you. Each day is a new chance to build a new version of yourself.

It occurs to me that without Bill Cunningham, I wouldn’t be a fashion blogger; indeed, there would be no fashion blogs. He brought fashion out of the couture houses and into the streets and in doing so created a career that did not exist before. His influence is vast, spanning at least 50 years, but still felt as contemporary as clashing prints. So-called “street style” fashion or even Humans of New York would not exist had Cunningham not begun documenting fashion on the streets way back in 1967.

His photos tell a story. The subjects in them are alive, as they jump across a puddle, hail a cab, or react to something they just heard. He captures a moment, not just a outfit. We are so inundated these days with airbrushed advertisements and photoshopped models, and it is unbearably dull. We want to know how people create their looks and develop their styles. There is a vulnerability and an openness in that. Think of how the no-make-up selfie went viral. People want to think, "hey, I could do that, too!” The journey is so much more interesting than the destination. Bill, as always, was way ahead of the curve.

Richard told me that before he met Bill, he assumed he just shot photos and ran them every week. But when he would run into Bill in the office, Bill would look at what he was wearing that day and would comment on the color and tell him the exact name and shade and which year the color had been introduced or when it was most popular. Once, Richard wore a Hawaiian shirt in the summertime and, as Richard put it, “Bill could tell me the name of the leaf that had been used in the printed fabric which made up the shirt."

"He had an encyclopedic knowledge of fashion," Aloisio continued. "He was around so long that he noticed the cycles that came around again. He said that in the 1950s there were fewer choices, but now everyone wears whatever they want and it’s chaos. Bill predicted that it will come around yet again and things will simplify.”

I wonder if that isn’t true? The pushback against fast fashion and the human rights violations occurring in the textile industry makes me think that we are headed back to a time where people buy more well-made and ethically sourced items, rather than stockpiling cheap, disposable fashions.

What struck me most in our very brief meeting was his sense of curiosity. Upon seeing my turban, he asked questions, noticed the pattern and colors, admired the way the outfit was put together, and there he was — the last word in fashion, a living landmark, and yet he was asking me how I created my look. I think curiosity is really the key to his entire outlook. He never stayed still, he always looked forward and kept an open mind. He never became stale or fell behind. He was always out there, looking and learning and capturing it all on his Nikon.

Back at the elevator, after examining my hat, he turned to Richard: “But your shirt is no shy violet, either. Wonderful!”

"Yes, you said the shade was marigold," Richard replied.

"Marigold. That's what I thought this morning, yes. It's beautiful, Richard. Ah, you have joy with it, young fella. It's nice to see someone having a pleasure with it, you know, instead of taking it so serious.”

Then turning back to me: “But your coat child, is lovely."

With that, he turned and walked in the direction of his cubicle. "Goodnight kids!"  he called out turning back and waving at us, "Goodnight!" we rang out in unison, waving right back as his blue jacket disappeared around the wall. The perfect New York moment, gone but not forgotten — just like Bill.