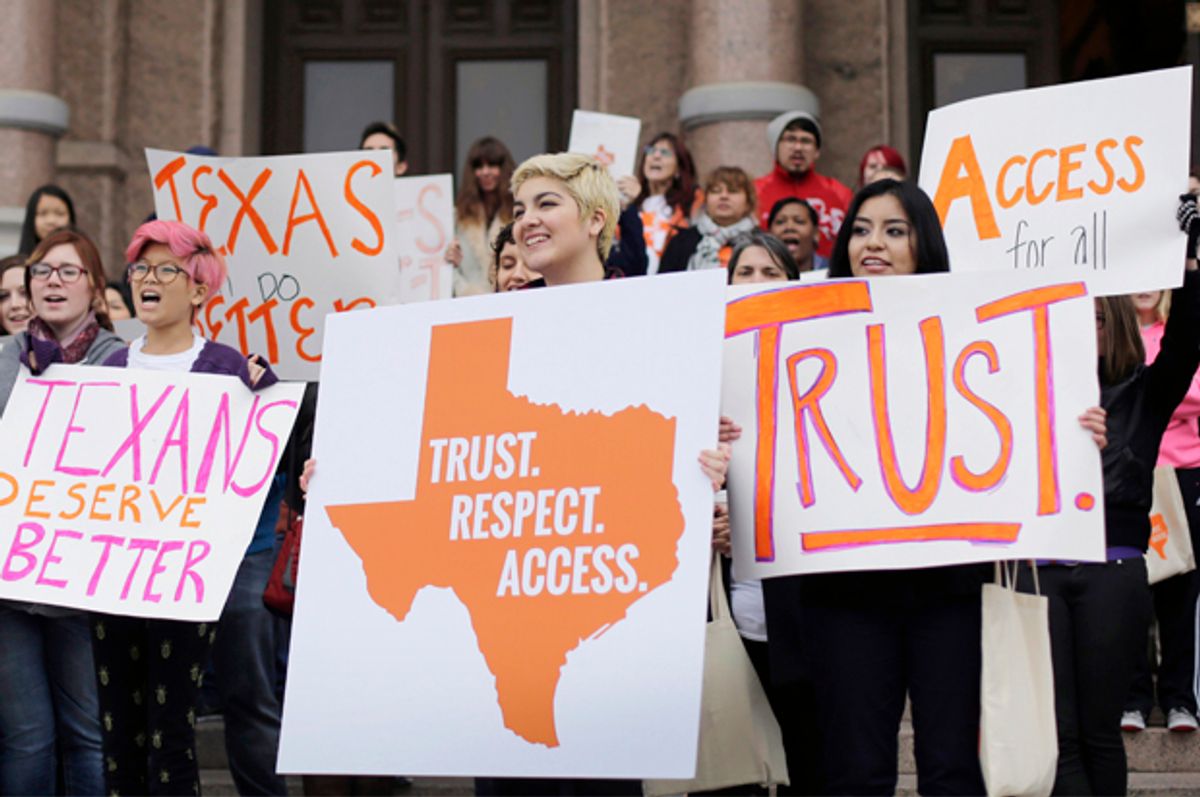 The scene outside the Supreme Court on Monday morning was a lively one, as pro-choice and anti-choice activists gathered to hear the case that will determine whether or not abortion will be legal in all 50 states, not just in theory, but in practice.

The scene outside the Supreme Court with about an hour to go before the Texas abortion ruling pic.twitter.com/h2RhQYwLRK

The pro-choice side was vindicated in a robust 5-3 decision, written by Justice Stephen Breyer, that strikes down the Texas law, passed in 2013 that would shut down the vast majority of abortion provision in the state.

Under the flimsy pretext of "protecting" women's health care, Republican legislators, during a special session, passed a bunch of regulations on abortion clinics that were clearly meant more to shut down clinics more than to improve the safety of abortion, which is pretty much impossible, as abortion is already safer than dental surgery or a colonoscopy.

Justice Ruth Bader Ginsburg, who has long been outspoken on abortion rights, wrote a concurrent opinion, making this not just a strike-down of the law, but also a smackdown. Many other states have been passing similar regulations that restrict abortion access under the guise of "women's health," and this decision is expected to end or at least severely compromise those, as well.

SCOTUS: This will affect laws in other states. #abortionaccess

The incredible bad faith of the regulations was what was at stake, as the prevailing opinion, which Justice Anthony Kennedy signed onto in 1992, hold that there can be no "undue" burden on abortion. The court sides with the pro-choice side, who argued that the law was written in bad faith, that these medically unnecessary restrictions do, in fact, constitute an undue burden.

It's a victory as much for common sense as women's health care. These regulations included things like requiring abortion clinics to have hospital admitting privileges, even though most hospitals only give these to clinics that actually admit patients, something abortion clinics don't do, because abortion is incredibly safe. The law also requires abortion clinics to have a full surgical suite, on par with what a hospital would need. This is particularly ludicrous as abortion is either done with a pill or with a short procedure that involves no cutting and can't really be understood as surgery.

This decision will set back the anti-choice movement at least a decade. For years now, the movement has put nearly all of its energies behind efforts to whittle abortion out of existence through these disingenuous regulations that reduce abortion access under the guise of "women's health".

With that pretense taken away, it's unclear what path the movement will take. Efforts to end funding for Planned Parenthood by invoking urban legends and outright lies about the organization selling "baby parts" have some momentum right now, but those efforts are unpopular and only serve to remind the public that the anti-choice movement hates contraception access, which is the majority of Planned Parenthood's work, as much as they hate abortion access.

There's already signs that the anti-choice movement, anticipating that this decision wouldn't go their way, has fallen into chaos. Americans United For Life, the primary organization behind the regulate-abortion-out-of-existence strategy, quietly shed Charmaine Yoest over the spring, even though she was the nation's most prominent advocate for this strategy. Or perhaps because she was, as it's clear that the strategy she has backed for years has blown up in their faces.

The path of this law as been paved with drama from the beginning. When it was being debated during a special legislative session during the summer of 2013, then state senator Wendy Davis conducted a 13-hour filibuster that stopped the bill from being passed.

That moment of triumph quickly turned to dust, however, as the right made Davis their second most hated woman in the country, after Hillary Clinton, and the bill passed anyway, after Gov. Rick Perry called a second session to cram it through.

But Monday, the pro-choice side pulled out their victory, overcoming the overt misogyny of the anti-choice side (which took to calling Davis "Abortion Barbie") and the snide bad faith that underpinned the faux claims to be doing all this for women's health. Davis was celebratory on Twitter:

This decision will likely have ramifications for the entire religious right, and not just the anti-choice movement. After all, just a year ago, the Supreme Court also handed religious conservatives another resounding defeat, by legalizing same-sex marriage.

And this is all happening in an atmosphere where the religious right's grip over the Republican party is visibly declining, as evidenced by the rise of Donald Trump, a man who has clearly never cracked open a Bible. Oh, religious conservatives are clinging tenaciously to the illusion of relevance. James Dobson ran around telling reporters last week that Trump is born again, a move so desperate it can only cause dark laughter. But few are fooled. The false displays of piety, the Bible-clutching talk about family values? All of it is falling away as conservatives turn away from pretending their politics are about any kind of "morality", preferring instead to wallow openly in nationalism and the politics of resentment.

Which, of course, is what the religious right was always about as well. After all, their political efforts — chipping away at gay rights and reproductive rights — are naked attempts to punish other people that they resent for making sexual choices the right does not approve of. But they always tried to wrap their resentment and hate in a veneer of Christian love, but the veil is falling away. And this Supreme Court decision is making it harder than ever for the right to cling to religion as the pretense for the politics of resentment.