Amid the chaos, supporters of Britain leaving the E.U. are now tring to walk back their empty vows 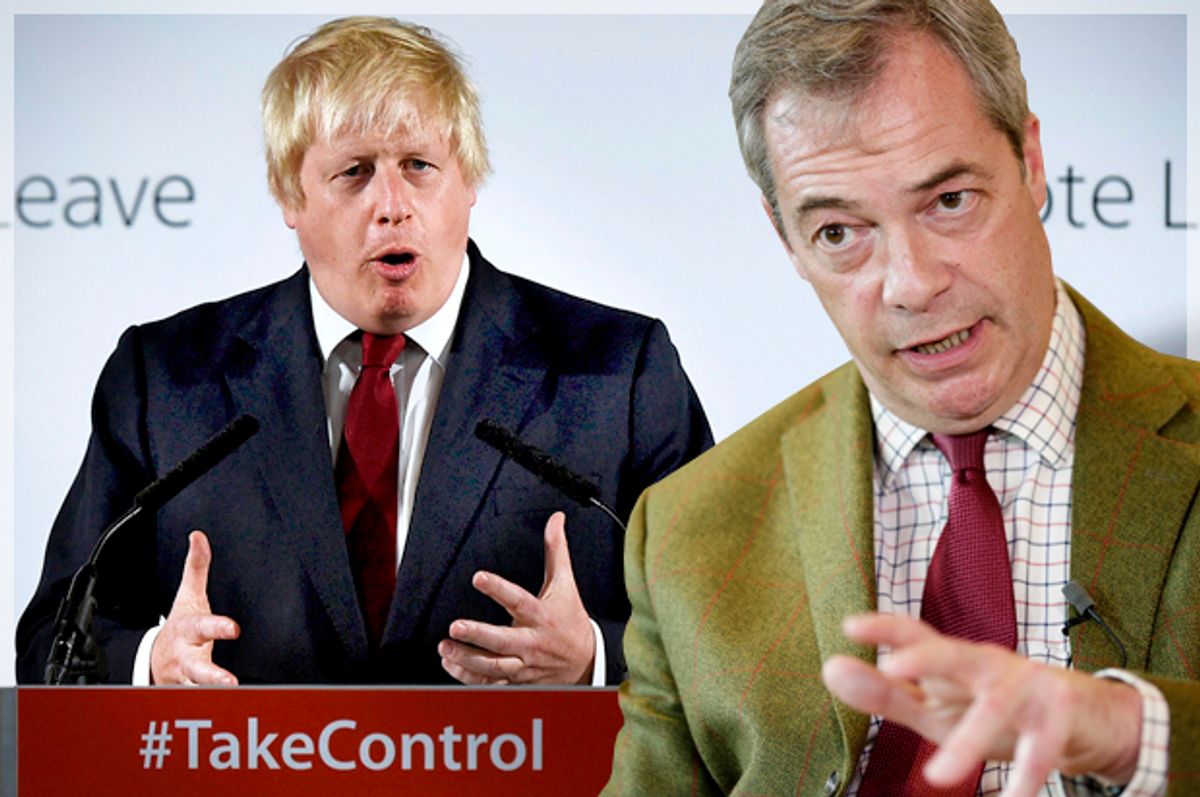 The situation in the U.K. is nothing short of chaotic. The country voted to leave the European Union last week and has since plunged into disarray.

Amid the turmoil, the right-wing leaders of the movement for a British exit from the E.U., or Brexit, have quickly begun to retract the promises they made to their supporters.

Brexit advocates previously insisted leaving the E.U. would allow the country to better fund social services, strengthen the economy and control immigration. Now, they claim their promises were misunderstood, or were not even promises at all.

Meanwhile, racist incidents have exploded as far-right nationalists have been empowered to threaten Britons of color, Muslims and immigrants, intimidating them and telling them to leave the country.

"A lot of things were said in advance of this referendum that we might want to think about again," former Conservative minister Liam Fox, who campaigned for the U.K. to leave the E.U., admitted in a candid moment on the BBC.

Perhaps the most disingenuous claim of Brexit leaders was that, by leaving the E.U., Britain could provide more funding to its National Health Service, or NHS, the U.K.'s very popular and successful system of socialized health care.

This claim was odd from the get-go, given that many of the right-wing leaders making this promise in fact support privatization and other neoliberal economic measures, yet cynically exploited the popularity of the NHS for political gain.

Perhaps uncoincidentally, then, mere hours after the successful Brexit vote, these leaders started walking back their pledge.

Boris Johnson, the right-wing former London mayor who spearheaded Brexit, campaigned heavily on the promise that the £350 million the U.K. sends the E.U. every week would instead go to funding the NHS. He even traveled around the country in a bus with this promise emblazoned on it.

For starters, the £350 million figure was itself misleading. This is the gross total that the U.K. sends to the E.U.; it does not consider the amount of money the U.K. gets back from the E.U. in return.

Nigel Farage, the leader of the far-right U.K. Independence Party, made even more egregious claims just weeks before the vote, nonetheless. In a BBC interview on June 9, Farage boldly declared, "Can we just get to the truth of this — £350 million a week is wrong, it’s higher than that." He asserted the actual figure is £55 million per day day, and maintained, "We should spend that money here, in our own country, on our own people."

Yet, a few hours after the successful Brexit vote, Farage had suddenly changed his tune. He called the £350 million claim a "mistake," and told the BBC that he can't guarantee that any of this money would go to the NHS.

Iain Duncan Smith, a former leader of the Conservative Party who pushed for the U.K. to leave the E.U., also backtracked on the promise.

Adding to this broken promise is the economic turmoil Brexit supporters insisted would not ensue. The British pound sterling has plummeted in recent days, to the lowest level against U.S. currency that has been seen in 31 years. On the night of the vote, when the results were still being counted, the currency had already tanked at least 8 percent.

Brexit leaders claimed the British economy would flourish. It was only the regulations of the bureaucratic E.U. that was holding the U.K. back, they argued.

Yet the neoliberal policies that led to the financial crisis in 2008 and have only persisted since then have left the global economy fragile to such sudden changes.

"The shock waves are being felt across the globe at a time when economies are still fragile from the 2008 economic crisis, interest rates are close to zero and central banks have fewer tools than normal to revive demand if countries enter recession," Reuters reported.

As the The New York Times put it, "With financial markets in turmoil, a big drop in the pound and the prospect of further chaos, some supporters of Brexit are backpedaling on bold pronouncements they made just a few days earlier."

Far-right leaders have persistently blamed Europe's economic woes on immigration, not on the neoliberal policies that led to these problems. Like Donald Trump in the U.S., politicians like UKIP's Nigel Farage distract from how crippling austerity measures, the gutting of social services and the deregulation of powerful corporations have hurt the standards of living of millions of working people, and instead scapegoat migrants and refugees.

Brexit's staunchest advocates promised that leaving the E.U. would allow them to stop or at least drastically curtail this migration. Yet, after the successful vote, Brexit leaders now appear to have broken this promise too.

The Times pointed out that "migration was the cornerstone of the Leave campaign." Many migrants from eastern and southern states in the E.U. moved to the U.K. for work. For years, many people from South Asia, which was formerly brutally colonized by Britain, have also come to the country in search of better economic opportunities.

Boris Johnson's campaign was predicated on the argument that the E.U. did not allow Britain to control its immigration policies.

Michael Gove, the Conservative justice secretary who also campaigned for the leave camp, insisted Brexit would “bring down the numbers” of immigration by 2020.

Farage fear-mongered about refugees and the possibility of Turkey joined the E.U.

Yet Conservative parliamentarian Daniel Hannan, a key pro-Brexit figure, later admitted to the BBC, “Frankly, if people watching think that they have voted and there is now going to be zero immigration from the E.U., they are going to be disappointed.”

In the meantime, racist intimidation has rapidly increased. The Guardian noted that Polish immigrants have been harassed with cards reading, "Leave the E.U. No more Polish vermin."

One Polish woman was told to get off a bus and "get packing." A Polish man at an airport was told he "shouldn't still be here, that we had voted to be rid of people like him." And a Polish coffee shop worker was told "you're going home now."

Sayeeda Warsi, the former chair of the Conservative Party, lamented that people of color who have lived in the country for multiple generations are being stopped in the street and told "it's time for you to leave." Warsi had previously supported Brexit, but later changed her mind, calling the campaign “divisive and xenophobic.”

There have been wide reports of Muslim Britons being shouted at with hateful chants like "get out, we voted leave." In another publicized incident, a white man at a grocery store shouted, "This is England now, foreigners have 48 hours to fuck right off. Who is foreign here?"

A widely shared photo on social media showed a white man wearing a shirt reading, "Yes we won! Now send them back."

Conservative Prime Minister David Cameron announced that he will be resigning, and the country is preparing to have a new leader by the beginning of September. Boris Johnson, the right-wing former London mayor, is the front-runner to replace Cameron.

Many people are calling for snap elections to vote for a new prime minister. The neoliberal Blairite wing of the Labour Party has tried to oust popular leftist leader Jeremy Corbyn, although he has stood strong. A petition expressing a vote of confidence in Corbyn after Brexit received more than 200,000 signatures in just a few days.

Another petition calling for the British government to hold a second referendum on E.U. membership has received more than 3.5 million signatures.