The failure of the Second Amendment: Our founders got this one wrong in every respect 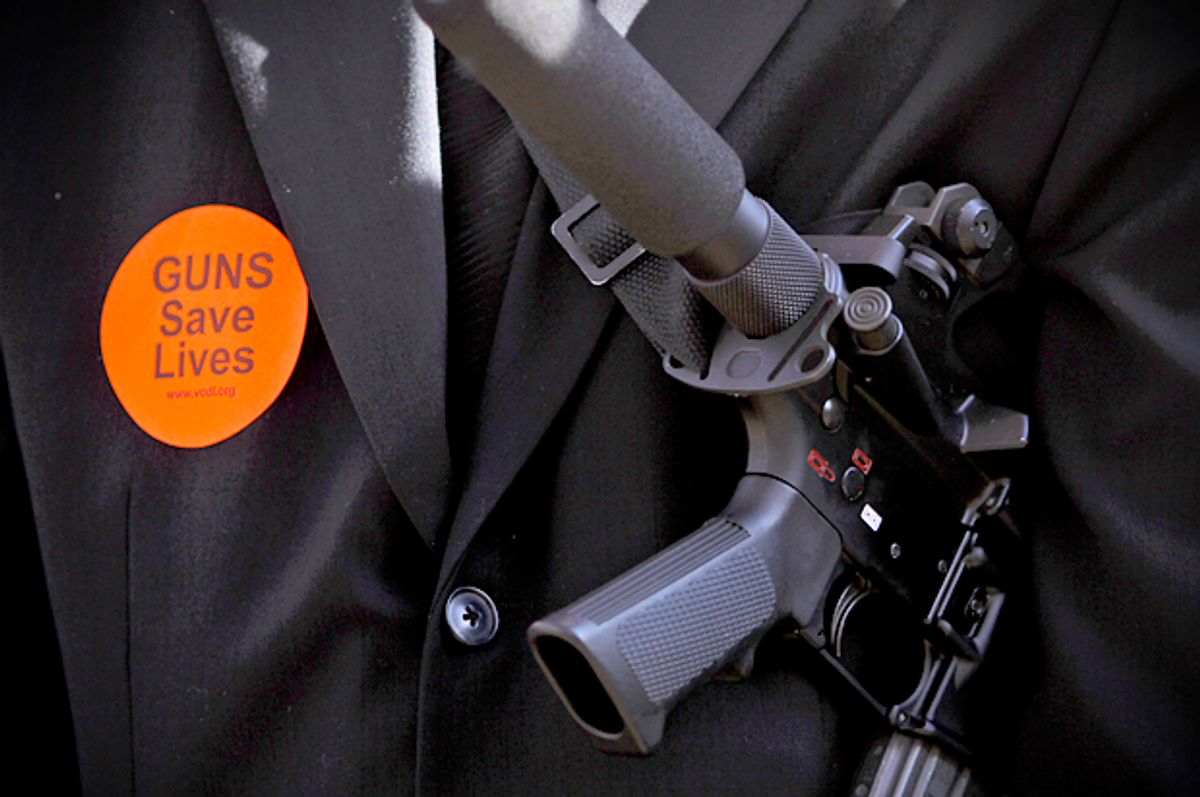 At the time that the Second Amendment was ratified, the United States had just successfully separated from Great Britain and was in the precariously weak position of being a brand new country.  There was the risk of attempted reconquest by the British (not likely, but still a risk), there were the unsecured frontiers and indigenous Native Americans who at times aggressively resisted against the violent expansionism of white settlers.  Plantation owners were wary of the risk of slave rebellions.  Lawlessness existed in the countryside with little in the form of law enforcement.  There were many perceived dangers in post-colonial American life that could be redressed with a shooting iron.  Granted, the origin of many of these perceived dangers were clearly self-inflicted by the reckless and short-sighted foolishness of settlers, the barbarous institution of slavery, the agenda of a wealthy slave owning class of politicians, and a bad tendency of American men to get caught up in the blindingly stupid gentleman’s ritual of duels with pistols.  The Second Amendment, in its original iteration, was established so that the nation could defend itself from the perils of post-colonial America and its people could enjoy a passing sense of security well into the future.

However, the question remains as to whether or not this aged bit of legislation has actually accomplished its goal.  Have militias effectively contributed to the defense of the nation and has a freely armed private population made America fundamentally safer and more secure society where life, liberty and the pursuit of happiness exist by virtue of a well-armed populace?

The militia is all but left out of the modern dialogue regarding the Second Amendment.  The irrelevance of the militia is a byproduct of its own historical shortcomings; the militia of the early United States has a long and sordid history of being undisciplined, unreliable, insubordinate, lacking in courage and abundant in insolence.  So much so that even George Washington once lamented that, “To place any dependence on the militia is, assuredly, resting upon a broken staff.”  When not proving its incompetence on the battlefield of America’s wars, militias often struggled to be ‘well regulated’ and when they were, it was frequently for awful reasons like hunting fugitive slaves, rallying under the cause of violent white supremacy, and terrorizing immigrants, striking laborers, and Native Americans.  So ineffective and unreliable was the early American militia as idealized by the Second Amendment, that by the 20th century it had fundamentally ceased to exist in favor of more effective and well-regulated professional police and military.  The dubious historical distinctions of the militia demonstrate that this component of the Second Amendment was a failure since implementation.

Regarding the role that gun ownership plays in making America safe, it would be more prudent to simply look at data, the most recent of which indicates that the United States experienced 372 mass shootings in 2015 that lead to the deaths of 475 people, add to that 64 school shootings.  Overall, 13,286 people died from guns in 2015.  60% of murders in the US were perpetrated with a firearm, largely contributing to the fact that the homicide rate in the US is about five times that of Canada, Australia, and the UK.  Firearms deaths from 1968 to 2011 were estimated to be around 1.4 million – for comparison sake, all of the American war dead from all of their wars is 1.2 million.  The CDC estimates that about 40,000 American commit suicide each year, over half of those use a firearm to complete their suicide, meaning that most of the gun deaths in the US are self-inflicted.

There are those that would argue that gun ownership is a deterrent to gun violence – a claim that reemerges in public dialogue after the all too frequent occurrence of a mass shooting.  It is difficult to find concrete data on how often an armed citizen stopped a potential mass shooting, and that may be because it simply doesn’t happen very often.  One particular article in conservative media detailed a number of collected examples.  What was troubling about this piece of clearly pro-gun literature was that they were able to only collect twelve incidents which spanned the last twenty years and the most recent was as far back as 2014.  Compare that to the number of successful mass shootings that have occurred in the same amount of time: again, 372 in 2015 alone.  A simple cost-benefit analysis indicates that the logic of self-defense is flawed and divorced from reality.

Ultimately, the Second Amendment has merely created a means through which violent people can obtain lethal ordnance and act on their dark intentions.  Equally as tragic, it provides a method which those who have lost all hope or struggle with mental illness can sever themselves from the mortal coil in what they may see as a quick and painless suicide.  All the while, millions of law abiding gun owners stockpile arsenals in futile preparation for the statistically very unlikely event that they will actually use them for self-defense.

The fact that the United States has and continues experience staggering levels of gun-related deaths, despite presently having well over 330 million guns in the country, is clear demonstration that being well armed as a society does not equate to being safe in a broader sense.

This makes for a strong argument that the Second Amendment is a failed amendment – a hopelessly entrenched piece of legislation that has continually fallen short of its expectations and has contributed more to depriving Americans of the rights of life, liberty, and the pursuit of happiness than to protecting those same rights.