Yet another white lady in jeopardy: "The Shallows" and Hollywood's empathy gap

In movies like this, the suffering of local people of color takes a back seat to the plight of Caucasian outsiders 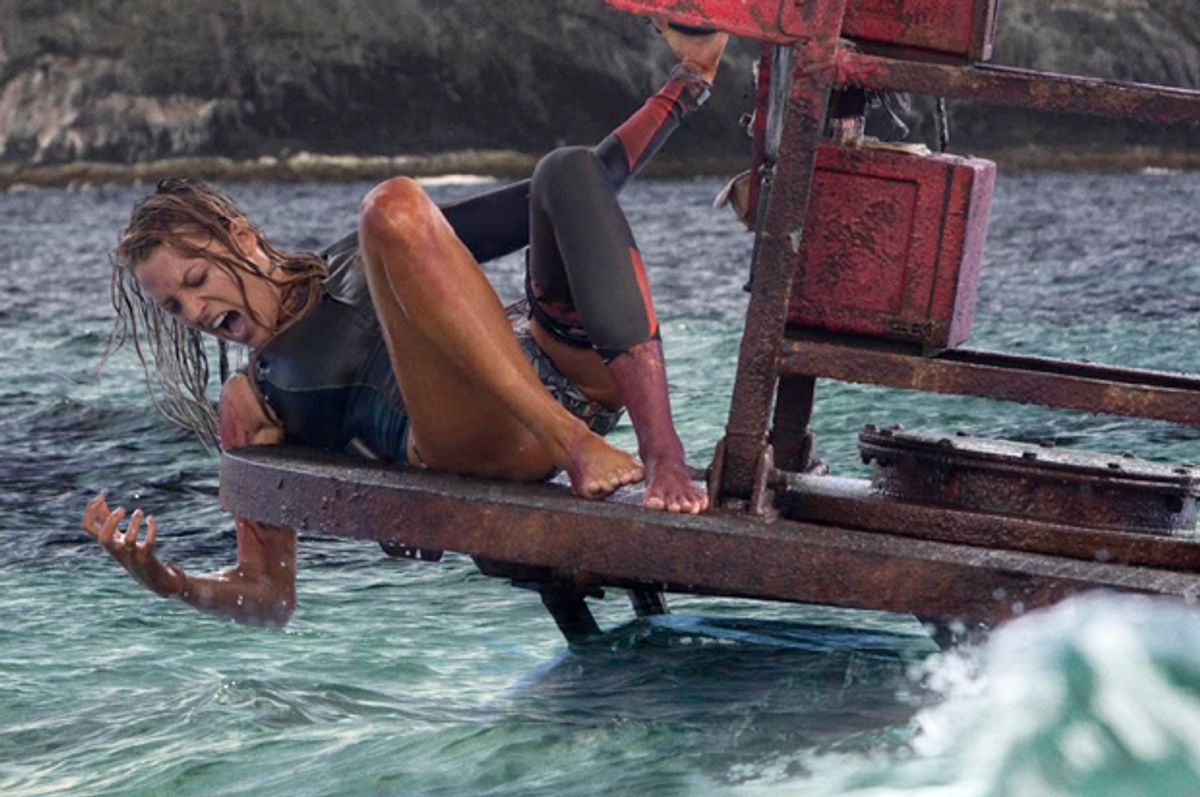 How many brown people have to die so that Blake Lively can live?

That question is explored in “The Shallows,” the new carnivorous shark B-movie from schlock maestro Jaume Collet-Serra (“Orphan”) that’s like “Open Water” with more posterior shots. Collet-Serra so favors Ms. Lively’s backside that he appears to be moonlighting as her proctologist. In “The Shallows,” the former “Gossip Girl” starlet dons a skimpy bikini to catch some waves in Mexico, where she quickly discovers that there’s trouble in these waters. A shark attacks her, severely injuring her leg. Resourceful protagonist Nancy (a medical student, of course) makes a suture out of her earring while she takes shelter on a rock and waits for rescue.

Collet-Serra, the Spaniard who also directed the Liam Neeson thrillers “Unknown” and “Non-Stop,” knows his way around this material. “The Shallows” is ingeniously constructed, projecting the image of Nancy’s stopwatch on screen at key moments to build suspense; Nancy calculates the distance to the nearest buoy to see how much time she has before the shark catches up to her. Collet-Serra often films in different styles, jumping between lush aerial panoramas of the breathtakingly clear waters and manic handheld shots through the use of a GoPro.

But while the film is elevated by its director’s skill and a surprisingly strong physical performance from Lively, “The Shallows” is yet another in a string of movies that amount to white survival porn—in which the trials of Caucasian tourists are treated as more important than the suffering of the people of color around them. Collet-Serra’s thriller foregrounds the suffering and the fragility of whiteness, while the brutal killings of local Latinos (many of whom attempt to save Nancy) go unmourned and are little remarked upon. While Nancy has agency and a backstory, none of brown people who perish in the harsh sea are granted the same compassion. It’s yet another reminder that in Hollywood, only white lives matter.

There are five people of color in “The Shallows,” and for the purposes of this essay, we will assume they are Mexican, because we are given next to no information about their lives. Nancy is given a ride to a secluded beach by Carlos (Óscar Jeanada), a local who lives near the shore. “The Shallows,” which was written by Anthony Jaswinski, isn’t terribly interested in Carlos’ life. During their car ride, Nancy spends the trip complaining about the friend who got too drunk to accompany her on the excursion. Carlos’ only character trait is that he has a young son. (Spoiler: He will come to Nancy’s aid at a pivotal moment.)

When Latinos aren’t cast in a servile position—around to chauffeur wealthy white people—they are shark bait. After Nancy becomes trapped on the aforementioned rock, she notices that a man passed out on the beach overnight. He’s the town drunk, depicted with an empty liquor bottle seemingly fused to his hand (ala Ellen Barkin in “Drop Dead Gorgeous”). She awakens him by screaming for help. Rather than coming to her rescue, the inebriated fellow steals her stuff: her backpack, her wallet, and her phone. Not yet satiated by looting her, he even tries to make off with her surfboard.

Because this is a horror movie, you can probably guess what happens: He is killed before he can get away. The encounter takes place offscreen, a wise choice on Collet-Serra’s part. But while there’s a nonjudgemental passivity to Nancy’s injuries, the shark reserves a special wrath for the looter, severing him in half. After he is attacked, the man still tries to claw his way to safety, even though he’s missing his legs and trailing his intestines behind him.

This gruesome treatment of Latinos is par for the course. When Nancy first arrives at the beach, she meets two Mexican surfers, who depart just as our heroine is first besieged by the shark. Nancy tries to stop them but to no avail. Luckily for her, the two come back again to surf the next day—but are killed trying to intervene. While Lively gets to play something resembling an actual human being, these men are nothing more than ciphers. They have little dialogue and no depth or dimensionality; you never learn their names. The film’s IMDb page is strangely unhelpful in this regard: The characters aren't even listed.

There's, of course, a reason for that. The lives of these Latinos are merely props in the story of a privileged white woman learning an Important Lesson. Nancy has recently decided to drop out of school following the death of her mother from cancer. “Some people just can't be helped,” she explains to her father over the phone. He argues that Nancy’s mother was a fighter and would have wanted her daughter to keep, well, fighting. (The movie repeatedly stresses this point.) In facing down death, Nancy regains that scrappy spirit.

Such were also the lessons of Juan Antonio Bayona’s “The Impossible,” which tells the story of Maria Belón and her family, who survived the devastating tsunami of 2004 while vacationing in Thailand. Much attention was paid to the film’s casting: In real life, Belón and her family are Spanish. Naomi Watts and Ewan MacGregor, who are Australian and Scottish, respectively, were cast to play the couple instead.

This was pointed out by some as yet another instance of Hollywood whitewashing—the tendency to erase non-white people from their own stories by casting Caucasian actors in place of people of color. Recent examples include the Scarlett Johansson-starring “Ghost in the Shell” (in which she plays Japanese) and Ridley Scott’s “Exodus: Gods and Kings,” featuring Joel Edgerton and Christian Bale as Egyptians. The Belóns are European, so the case is a bit different. But what received less scrutiny who wasn't represented in the film: The thousands of non-white victims who died in the horrific tragedy, nearly all of whom are reduced to background actors and props in their own story.

As The Guardian’s David Cox explains, few of the those who actually died in the tsunami were white. “The Indian Ocean tsunami of 2004 killed at least 227,898 people,” Cox writes. “Around a third of these were children.” Just 10 percent of those who died in the tsunami were Caucasian, a far cry from Naomi Watts’ assertion that half the victims were tourists. “Holiday paradise Thailand, with its 5,400 deaths, was actually at the margins of the tragedy,” Lee continues. “Indonesia alone suffered 130,700 deaths, largely of low-income Acehnese people; the figure for the U.K., whence [the film’s] family appears to hail, is 149.”

The movie’s treatment of its non-white characters is distressingly similar to “The Shallows.” If the Latinos in Collet-Serra’s film exist to serve and save white people, “The Impossible” exhibits the same racial power dynamics. “Virtually everyone shown suffering after the tsunami is a European, Australian, or American tourist,” the New York Times’ A.O. Scott writes. “At one point Maria and Lucas are cared for by residents of a small village and later they are helped by Thai doctors, but these acts of selfless generosity are treated like services to which wealthy Western travelers are entitled.”

If Scott claims that the fact that “the vast majority of the dead, injured and displaced were Asian never really registers,” why do Hollywood movies keep making these mistakes? After all, these issues were replicated in John Erick Dowdle’s “No Escape,” in which Lake Bell and Owen Wilson play an American couple who relocate their family to a unnamed South Asian country (hint: it's probably Cambodia) on the eve of violent revolution and must flee the tumult. The rebels are depicted like zombies, a mass horde that craves the flesh of innocent Westerners. But instead of eating brains, they hack their victims to death.

The little humanity afforded to people of color is a product of a Hollywood that privileges the stories of white folks above all else; this is a system in which white actors are considered “bankable,” while even A-list black actors are treated like second class citizens. Since nearly winning an Oscar for “The Help,” Viola Davis has struggled to find roles on film worthy of her, scoring thankless parts in “Extremely Loud and Incredibly Close” and “Ender’s Game.” Kerry Washington has yet to find a breakout role in cinema to match her work on “Scandal” and HBO's "Confirmation."

But if Hollywood devalues people of color, this is also indicative of how the lives, experiences, and even the pain of non-white people aren’t recognized in general. A groundbreaking 2013 study from the University of Milano-Bicocca described what researchers called an “empathy gap” along racial lines. When white people are shown images of both white folks and people of color being harmed, such as receiving a prick on the skin, the survey found that the respondents perceive non-white people as feeling less pain.

There have been a number of theories as to why that is. A separate study suggests that it has to do with privilege: Because respondents assume that people of color have experienced greater hardship, they unconsciously assume these subjects are accustomed to pain and can better deal with the occasional poke or pinch. But perhaps the more pertinent reason is that white people still struggle to relate to people of color at all; in Hollywood lingo, their struggles aren't “universal.” A 2012 study from Indiana University found that the more black actors a movie stars, the less likely white viewers are to want to see it.

It's telling that the costar who receives the most screen time in “The Shallows” isn't one of the Latino actors eaten by a shark but a seagull with a broken wing who hides out on the rock with Nancy. She nurses him back to health, popping his dislocated shoulder back into place so he can fly away. He’s still too weak to escape, so Nancy pushes him to shore on some debris. No one would dare wish harm to an injured animal, but it would have been nice if “The Shallows” cared about the pain of people of color as much as it does a bird.

Blake Lively Movies No Escape Race The Impossible The Shallows