America's Colombia problem: Widespread ignorance of the mess the U.S. has made in South America

Under the guise of a phony war on drugs, the U.S. continues to bankroll a humanitarian crisis in Colombia 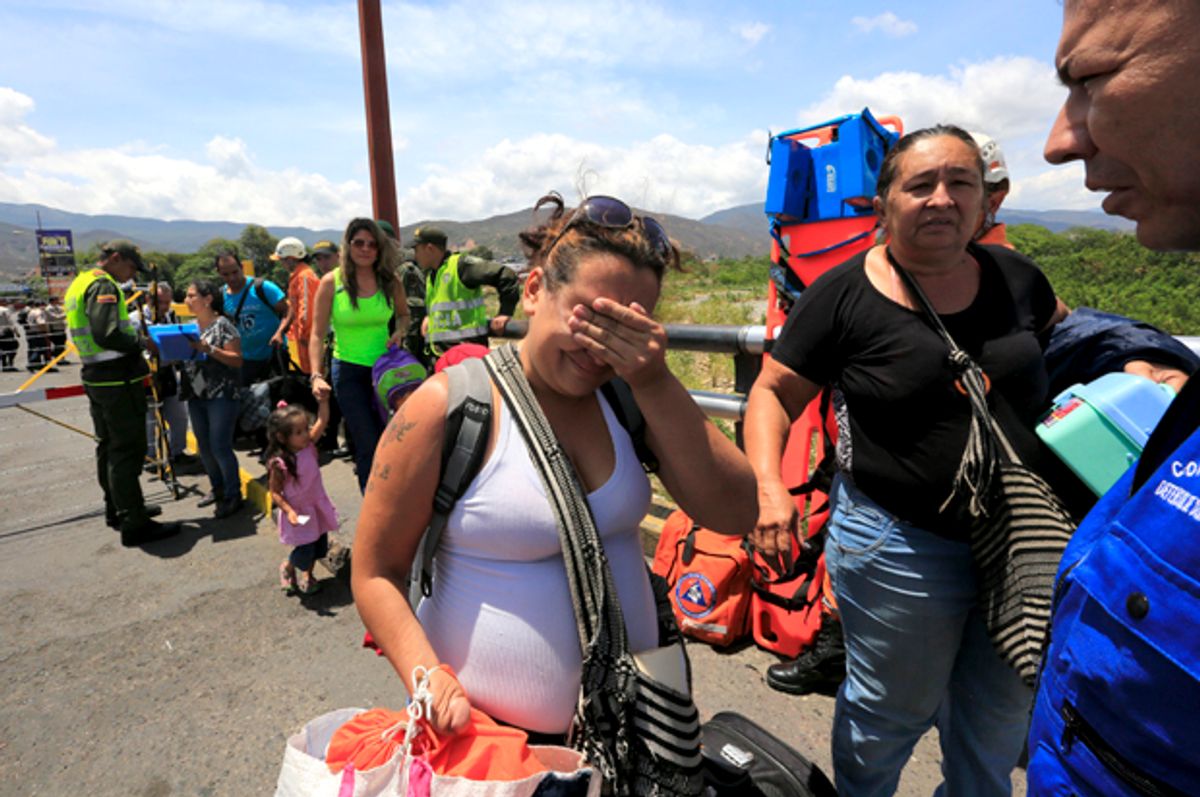 A Colombian woman cries after being deported from Venezuela, as she arrives with her family at the Simon Bolivar bridge border, near Villa del Rosario village, Colombia, August 25, 2015. (Reuters/Jose Miguel Gomez)
--

The Colombian government, with left-wing insurgent group Revolutionary Armed Forces of Colombia (FARC), announced a bilateral cease-fire on Wednesday in an effort to end a more than half-century civil war that's claimed over 220,000 lives.

"Under Plan Colombia," the statement reads, "the United States partnered with Colombia ... to strengthen Colombia's democratic institutions, safeguard its citizens, and improve the lives of the Colombian people."

As a result of decades of violent clashes between right-wing paramilitary and left-wing guerrilla groups, Colombia currently has more internally displaced people (6.9 million) than Syria (6.6 million), according to a  report from the United Nation's High Commissioner of Refugees.

Wednesday's cease-fire agreement is a desirable step toward a peace deal, which Colombian President Juan Manuel Santos said he anticipates reaching by July 20.

Once a peace agreement is reached, Colombia can then begin to recover from the devastation of American intervention.

In 2000, as part of its war on drugs, the United States government — under then-President Bill Clinton — conceived of "Plan Colombia," a substantial aid package aimed at reducing FARC's scope of influence.

FARC, it should be noted, grew as a Marxist-Leninist guerrilla army in the 1960s — a time when the U.S. was in the throes of Cold War paranoia. It is considered a "narco-terrorist" group by the U.S. government, though it's "primarily focused on taxation of illicit crops," not the trafficking itself, as a means of financing itself, according to MIT linguist Noam Chomsky's 2000 book, "Rogue States."

Since 1999, the U.S. has given well over $8 billion in aid to Colombia, with a disproportionate amount going towards the military and law enforcement. As of 2013, Colombia was the largest recipient of U.S. aid in South America.

As part of Plan Colombia's counter-narcotic measures, the U.S. contracted DynCorp helicopters to fumigate crops in Putumayo, southern Colombia — at one time the source of 40% of the U.S.'s cocaine — with herbicides to kill coca plants, destroying legal crops and increasing the incidence rate of skin disease in the process.

Such efforts have done little to curb the availability of cocaine in the U.S., while, "Colombia's human rights record remains deeply troubling," says Amnesty International.

Many counterinsurgent leaders in Colombia — and elsewhere in South America — were trained at the U.S. military's controversial School of the Americas  at Fort Benning in Columbus, Georgia. SOA was replaced in 2001 by the

The School of the Americas was replaced in 2001 by the Western Hemisphere Institute for Security Cooperation, which is still open.

Human rights violations committed by graduates of the school and the institute led to the formation of SOA Watch, an independent organization devoted to closing the school.

In a 2007 op-ed, School of the Americas activist Joe DeRaymond wrote, "Plan Colombia pumped over $4 billion in military aid in 5 years into the conflict, caused enormous environmental and human damage with a misguided fumigation policy, and failed miserably in controlling the civil war, the violence, or the drug trade."

DeRaymond, who for a time lived in Colombia, noted that, "Every day, 20 are killed for political reasons" and that a "weekly map of the war" published in the newspaper included "symbols showing the assassinations and massacres of the week, much like the weather maps in our daily papers."

"Colombian military units committed even more extrajudicial killings during and after the highest levels of U.S. assistance to those units," the report states. "For the 16 largest increases of aid from one year to the next to army units operating in a specific jurisdiction, the number of reported executions in the jurisdiction increased an average of 56% from the two-year period prior to the increase to the two-year period during and after the increased assistance."

From 9/11 to the war in Iraq to the rise of ISIS, the narrative of botched American interventionism shifted to the Middle East this century. High-profile human rights abuses at Guantanamo Bay and Abu Ghraib, for example, often overshadow similar abuses in South America.

In Colombia's case, however, the United States has effectively bankrolled a humanitarian crisis under the guise of a supremely ineffectual war on drugs.

At some point the U.S. ought to wield its vast defense budget not to teach corrupt military officers "torture, blackmail and other forms of coercion against insurgents," but rather to rebuild any number of societies it's helped collapse.