NYT: Millions of dollars of arms U.S. & Saudi Arabia sent to Jordan for Syrian rebels were sold to arms traffickers 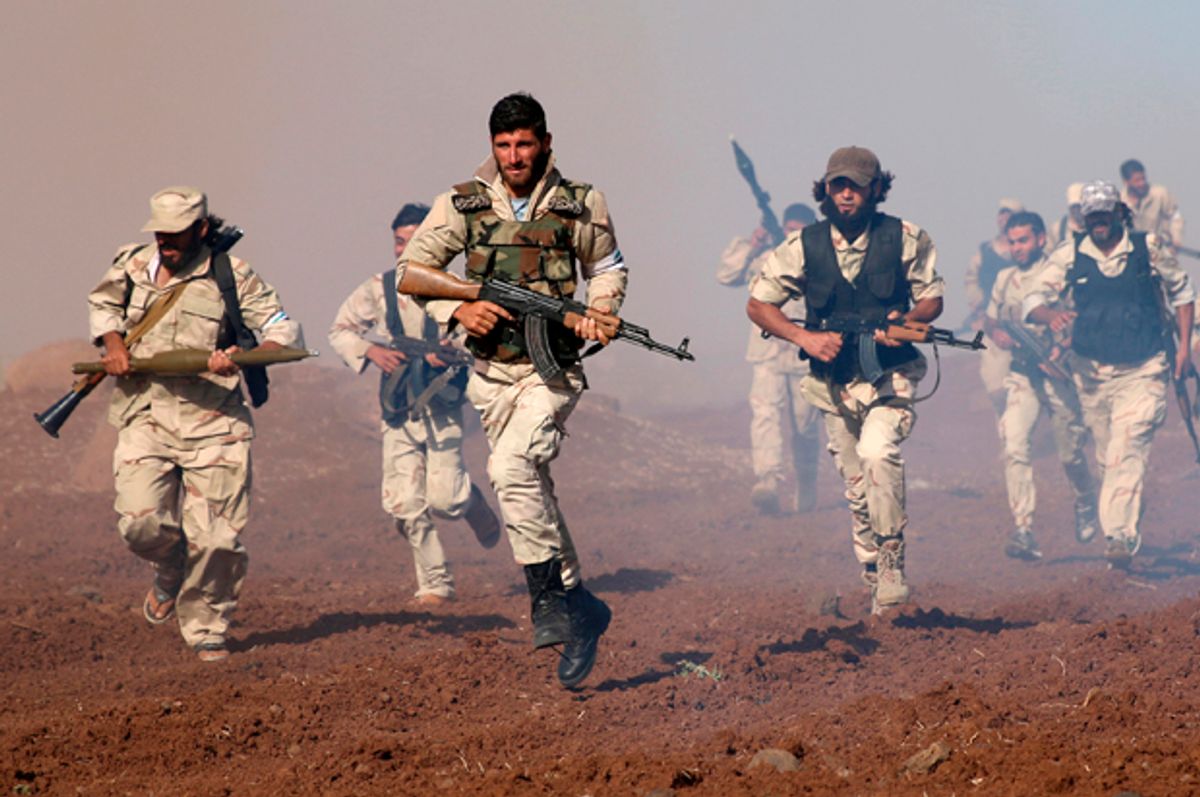 Millions of dollars worth of weapons the U.S. Central Intelligence Agency and Saudi Arabia sent to Syrian rebels have been "systematically" stolen and sold to arms traffickers on the black market, according to an explosive joint investigation by The New York Times and Al Jazeera.

U.S. and Jordanian investigators do not know where most of the arms went, reviving fears that the deadly military-grade black market weapons could have ended up in the hands of criminal networks and extremist groups outside the country.

Some of the stolen arms include Kalashnikov assault rifles, mortars and rocket-propelled grenades.

In their present arrangement, the CIA and allied Arab intelligence agencies buy weapons in bulk primarily in Eastern Europe, especially the Balkans, and hand these over to Jordanian intelligence, which then transfers the arms to Syrian rebels.

These weapons have been traced to at least one attack — a shooting at a police training facility in Jordan's capital, Amman. The FBI is presently investigating an attack in November in which a Jordanian police captain killed two American contractors, two Jordanians and one South African. U.S. investigators traced the serial numbers of the weapons used in the attack to those provided by the CIA for Syrian rebels.

This investigation "highlights the messy, unplanned consequences of programs to arm and train rebels — the kind of program the C.I.A. and Pentagon have conducted for decades," the Times wrote.

The Syrian rebel training program, code-named Timber Sycamore, was approved by the Obama administration in April 2013. It is classified, but American officials have acknowledged that the CIA and intelligence services in allied Middle Eastern countries have trained thousands of rebels in hopes of overthrowing the regime of Syrian dictator Bashar al-Assad. The program is based in Jordan, Syria's neighbor.

The U.S. and Saudi Arabia are the biggest contributors to Timber Sycamore. The Saudi regime provides weapons and large sums of money. The Times notes that "C.I.A. paramilitary operatives tak[e] the lead in training the rebels to use Kalashnikovs, mortars, antitank guided missiles and other weapons."

A previous report by The New York Times detailed how the extremist Saudi absolute monarchy has helped bankroll the CIA rebel-training program.

"From the moment the C.I.A. operation was started, Saudi money supported it," the Times noted. With the help of its "vast oil reserves," the Saudi regime has provided billions of dollars worth of weapons. Covert financing has also come from Qatar, Turkey and Jordan.

The CIA rebel training program, the Times explains, was created to help coordinate support for Syrian rebels. The regimes in Saudi Arabia, Qatar and Turkey had already smuggled thousands of weapons and millions of rounds of ammunition to Syrian rebels in 2012, sometimes with the help of the CIA.

"By the summer of 2012, a freewheeling feel had taken hold along Turkey’s border with Syria as the gulf nations funneled cash and weapons to rebel groups — even some that American officials were concerned had ties to radical groups like Al Qaeda," the Times reported.

"A constant irritant in American-Saudi relations is just how much Saudi citizens continue to support terrorist groups," it added.

A classified U.S. State Department cable signed by Secretary of State Hillary Clinton acknowledges, "Donors in Saudi Arabia constitute the most significant source of funding to Sunni terrorist groups worldwide," and adds, "Saudi Arabia remains a critical financial support base for al-Qa’ida, the Taliban, LeT, and other terrorist groups."

As of late 2013, with the training program in full swing, the CIA was working directly with Saudi Arabia, the United Arab Emirates and others to arm and train rebels in Jordan and send them into Syria.

The Jordanian monarchy has long been a close U.S. ally. The Times noted that, since the 1950s, the CIA has given large sums of money to Jordan's king in return for permission to run its operations inside his country.

In fact, the CIA essentially created the GID to help shield the Jordanian monarchy from internal and external threats. The head of the GID is widely considered to be second-most powerful person in the Jordanian government, after the king.

The Times cited a 2003 conversation in which George Tenet, the director of central intelligence under President George W. Bush, told then National Security Adviser Condoleezza, “We created the Jordanian intelligence service, and now we own it.”

Since the Sept. 11, 2001, attacks, the U.S. relationship with Jordan has only grown stronger. Jordan is among the largest recipients of U.S. military aid, after Israel and Egypt, and tied with Iraq.

Senior figures in Jordan's government deny that Jordanian intelligence officers are involved in the arms trafficking. Yet the GID, also known by its Arabic name the Mukhabarat, has been plagued by corruption in recent years.

Some Jordanian officials have known about the scheme for several months, and have said that senior officers who were aware of the systematic weapons theft were shielding lower-ranking officers. Several dozen GID officers have been fired, including a lieutenant colonel.

The CIA and FBI declined to comment on the Times' investigation. The State Department refused to speak about the allegations, simply reaffirming, "The United States deeply values the long history of cooperation and friendship with Jordan."