Clinton's pledge to forgive student debt of entrepreneurs, not average workers, will benefit the elite 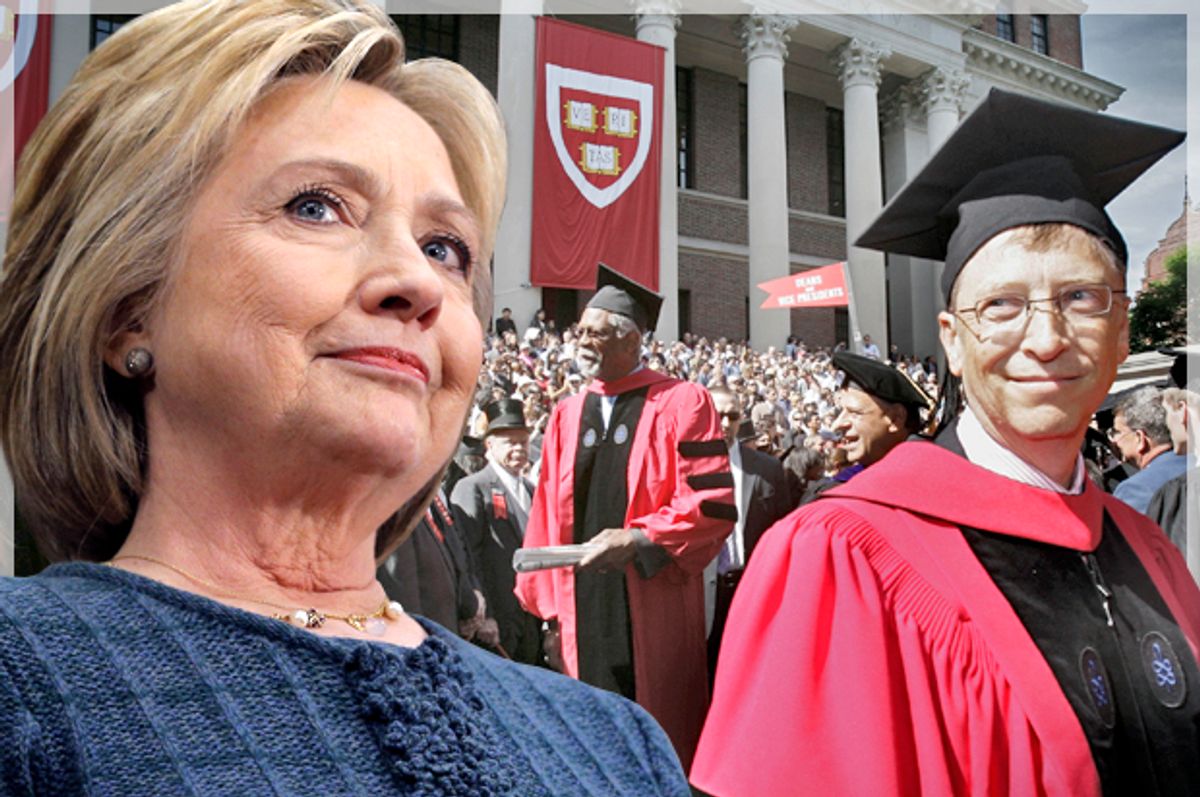 Clinton released her Initiative on Technology & Innovation on Tuesday. It reflects her neoliberal, technocratic vision of the economy.

In the initiative, Clinton outlines her plan to "support young entrepreneurs." As president, she says she would allow entrepreneurs to forgo paying their student student loans for up to three years, "so they can get their ventures off the ground and help drive the innovation economy."

Moreover, "innovators who start social enterprises or new businesses in distressed communities," Clinton adds, can apply for forgiveness of up to $17,500 of their student loans after five years.

Clinton has not made similar promises to help average working-class Americans with crippling student debt. In the education platform on her campaign website, she says she will allow Americans to refinance their loans at current rates, but there is no serious discussion of forgiveness.

At first glance, Clinton's new policy might sound like a good idea, but, simply by virtue of how entrepreneurship works, it will inevitably disproportionately benefit the elite.

Entrepreneurs employ people; business owners have people who work under them. Clinton's policy will help ease the student loans of these workers' bosses, while employees are crushed under the enormous weight of their student debt.

At least 43.3 million Americans had student loan debt as of the end of 2014, according to Federal Reserve Bank of New York figures. This number has likely increased since then.

There is approximately $1.2 trillion of student debt in the U.S. today. The average American with student debt has $26,700 in loans to repay.

Furthermore, since the 2008 financial crash, student loans have continued to grow, even while other debts have declined.

Partially forgiving the student loans of small business owners is not going to cut it. It is nowhere near the solution that is needed.

An entire generation has effectively been indentured with voluminous debt that they are unable to declare bankruptcy on. Millions of average workers will fall through the cracks in these policies.

In fact, in the shorter version of Clinton's technology initiative, she does not even acknowledge the employees of the entrepreneurs she pledges to help.

In the longer version, Clinton mentions employees just once, saying she "will explore a similar deferment incentive not just to founders of enterprises, but to early joiners — such as the first 10 or 20 employees."

Note: Clinton solely pledged to "explore" a similar initiative for average workers — she made no promises to help them in the way that she has promised to help their bosses.

Anyone who has tried starting a business knows it is very difficult, and it more often leads to failure than success. A staggering 90 percent of startups fail.

It defies reason to expect the more than 43 million Americans who have student loans to become entrepreneurs. This is approximately 13 percent of the total population; they can't start business with a 90 percent failure rate in hopes of potentially having part of their student loans forgiven.

Elsewhere in her initiative, Clinton is much more modest in her goals. She says she "will support incubators, mentoring, and training for 50,000 entrepreneurs in underserved markets, while expanding access to capital for small businesses and start-ups." A total of 50,000 is orders of magnitude smaller than hypothetical millions.

A significantly more comprehensive student debt relief program is needed — and desperately so.

Bernie Sanders, the self-declared democratic socialist opponent of Clinton, pledged to make public universities free for Americans — a policy that has long been implemented in many other industrialized countries.

Clinton merely pledged to "make debt free college available to all Americans." She says she wants out-of-control costs to be contained, but expects students to work 10 hours a week to pay, and wants families to eat into their small savings too — at a time when 63 percent of Americans don't have enough savings to pay for a $500 emergency.

Under Clinton's education plan, she says the average American with student debt could save just $2,000 over the life of his or her loans. That's not very ambitious.

At the heart of it, Clinton's stategy to cater to the entrepreneurial, business-owning class reflects her neoliberal worldview. Her policies are quite Reaganite in spirit, reminiscent of his supply-side economics policies. Like Reagan, Clinton's policies focus on the "job creators," not the working class.

Perhaps this is not surprising, considering how Wall Street has thrown its weight behind Clinton. Financial executives have recognized how she plays ball; accordingly, more than half of Wall Street donations have gone to Clinton's campaign.

University of California, Berkeley economists Ross Levine and Rona Rubenstein found that the majority of entrepreneur are white, male and highly educated. “If one does not have money in the form of a family with money, the chances of becoming an entrepreneur drop quite a bit,” Levine added.

The average cost to launch a startup is around $30,000, Groth reported, and more than 80 percent of funding for new businesses comes from personal savings and friends and family.

"We’re in an era of the cult of the entrepreneur," she wrote, but "starting a new venture is the ultimate privilege."

Clinton's idea that innovators and "job creators" are the bedrock of the economy and need to be incentivized is fundamentally neoliberal and right-wing. It presupposes that there are superior economic minds, and that average working-class people are less valuable.

In recognition that entrepreneurs are overwhelmingly from rich families, and are heavily white and male, Clinton expressed commitment in her initiative to trying to diversify entrepreneurship and to encouraging women and people of color to be entrepreneurs.

Yet this still does nothing about the millions of average workers who struggle to make ends meet, as their wages stagnate, their meager benefits are cut and their debts multiply.

Clinton says she wants to "increase access to capital for growth-oriented small businesses and start-ups, with a focus on minority, women, and young entrepreneurs." She pledges to "diversify the tech workforce" — but all this does is make the economic elite more diverse.

This is the quintessence of Clinton's worldview: She wants to strengthen and diversify the technocratic corporate ruling class, while average workers continue to be exploited.

Uncoincidentally, then, much of the language in the rest of Clinton's technology initiative consists of neoliberal doublespeak.

She pledges to "build the Human Talent Pipeline for 21st century jobs" and to "spur entrepreneurship and innovation clusters like Silicon Valley across the country." Silicon Valley, a kind of technocratic dystopia, is, for Hillary Clinton, a role model that should be replicated on an even larger scale.

There is constant talk in the initiative of STEM (science, technology, engineering and math). Clinton says her "New College Compact" will dedicate $10 billion in federal funding for students to pursue nanodegrees, computer coding and online learning. But there is virtually no discussion of the importance of the social sciences, yet alone of the humanities.

Technology and innovation, for Clinton, are purely corporate fields, not social ones.

Her policies constitute yet another entrenchment of an age-old strategy: socialism for the rich, and capitalism for the poor.