Hillary Clinton and Elizabeth Warren take the stage together: It might just be the beginning

Whether she's on the ticket or not, Elizabeth Warren has already proven to be a boon to Clinton's campaign 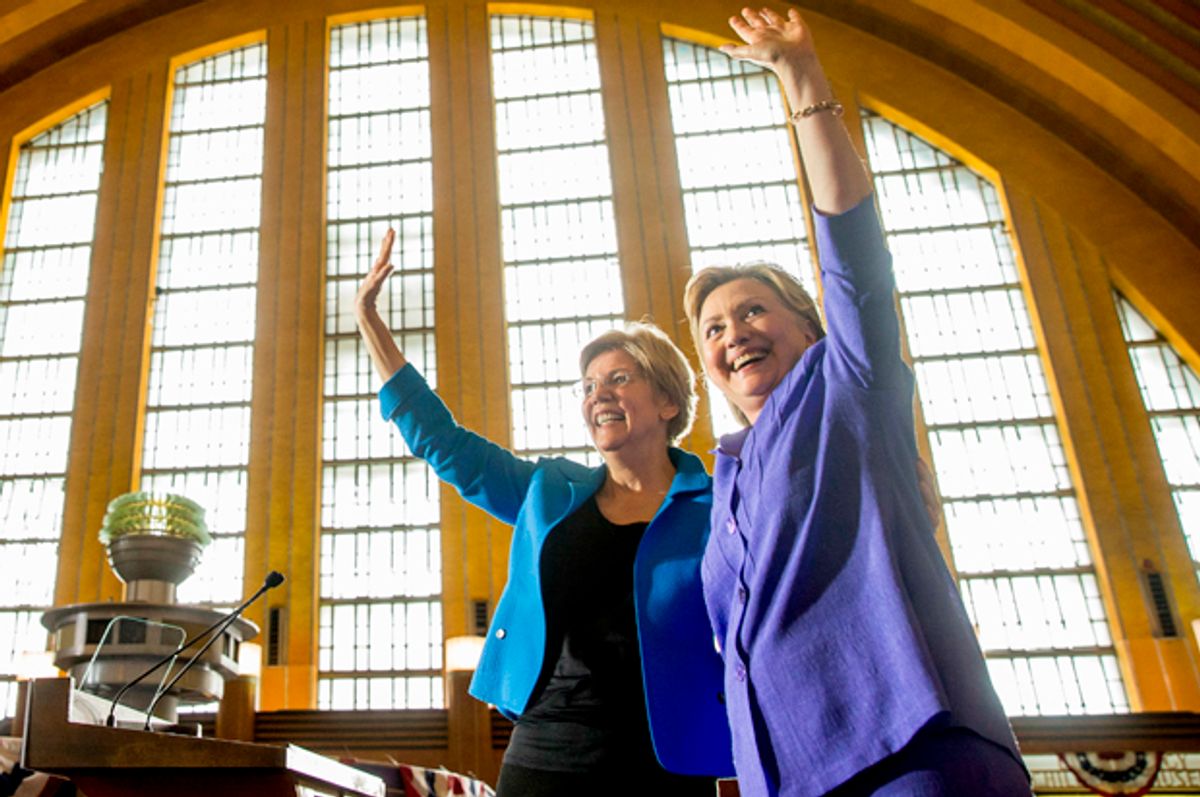 It was a perfectly staged event. Hillary Clinton, the presumptive Democratic nominee, and Elizabeth Warren, the fiery progressive hero, standing side by side, united against a common foe. This was the scene Monday in Cincinnati, OH, when Clinton and Warren appeared together at a campaign rally. The optics were right. The tone was perfect. Warren was as confident as ever. Clinton was steady, and clearly enjoying Warren's performance.

Such a sight was hard to imagine just a few months ago: Bernie Sanders was still very much in the fight, and Warren was his obvious ideological ally. But the Massachusetts senator wisely remained on the sidelines during the primary process. Despite considerable pressure from the left, she was a neutral spokeswoman for the Democratic Party.

It should've been clear months ago that Warren was interested in joining the Democratic ticket. Her agenda is practically indistinguishable from Bernie Sanders' platform, but Clinton was the likely nominee. However cynical, Warren could read the writing on the wall and knew opposing Clinton in the primaries would backfire later. If she wants to put her stamp on the party, better to be on the winning team.

It appears Warren's calculation paid off. The Clinton camp has made it clear that Warren is on the short list of VP picks, and yesterday was a kind of test drive. By all accounts it worked. Warren came out swinging: “Donald Trump says he'll make America great again...It's right there, stamped on the front of his goofy head...But when Donald Trump says 'great,' I ask: Great for who, exactly? For millions of kids struggling to pay for an education? For millions of seniors barely surviving on social security. For families that don't fly to Scotland to play golf?”

Warren's jabs have irritated Trump. There's a self-assurance behind them. She's unafraid and willing to get down in the mud with the Republican nominee. So far the Trump campaign has bumbled their responses to Warren. Yesterday, they called Warren a “sellout” for supporting Clinton and Trump foolishly doubled down his claims that Warren is a racist for claiming Native American heritage on her college applications. This is a silly counter to Warren, and she knows it.

Clinton, for her part, did her best to echo Warren's (and Sanders') populist themes. “I got into this race because I wanted to even the odds for people who have the odds stacked against them,” she told the crowd. “To build an economy that works for everyone, not just those at the top, we have got to go big and we have to go bold.” Progressives may find this sort of pandering irksome, but it's what Clinton has to do to bridge the divide within the party. Standing shoulder to shoulder with Warren, whose progressive credentials are unimpeachable, can only help.

Ultimately, Clinton may go with a safer pick for VP, someone like Tim Kaine from Virginia. I'm not sure that's the smartest play, but it still seems more likely at this point. In any case, yesterday proved that Warren can be a boon for the Clinton campaign. She compliments the Democratic nominee in all the right ways and is quite comfortable playing the role of attack dog. She also appeals to the liberal base of the party, which is rightfully suspicious of Clinton. Adding Warren to the ticket will ease enough of the anxiety on the left to make November less suspenseful for Democrats.

Whatever Clinton decides to do, she ought to think carefully about this pick. There are a lot of variables to consider, and Warren surely carries a few risks, but she may be the ideal running mate in this climate. This will be an ugly race, and Warren is happy to trade punches with Trump. Clinton has little to gain by slinging mud; she needs a strong voice on the ticket. Warren isn't the only option, but she sure is a good one.