Racists, energized by Trump and the Brexit vote, are acting out more — sometimes violently

Right-wing populism is leading to a surge in violence and abuse, as racists feel vindicated, reports say 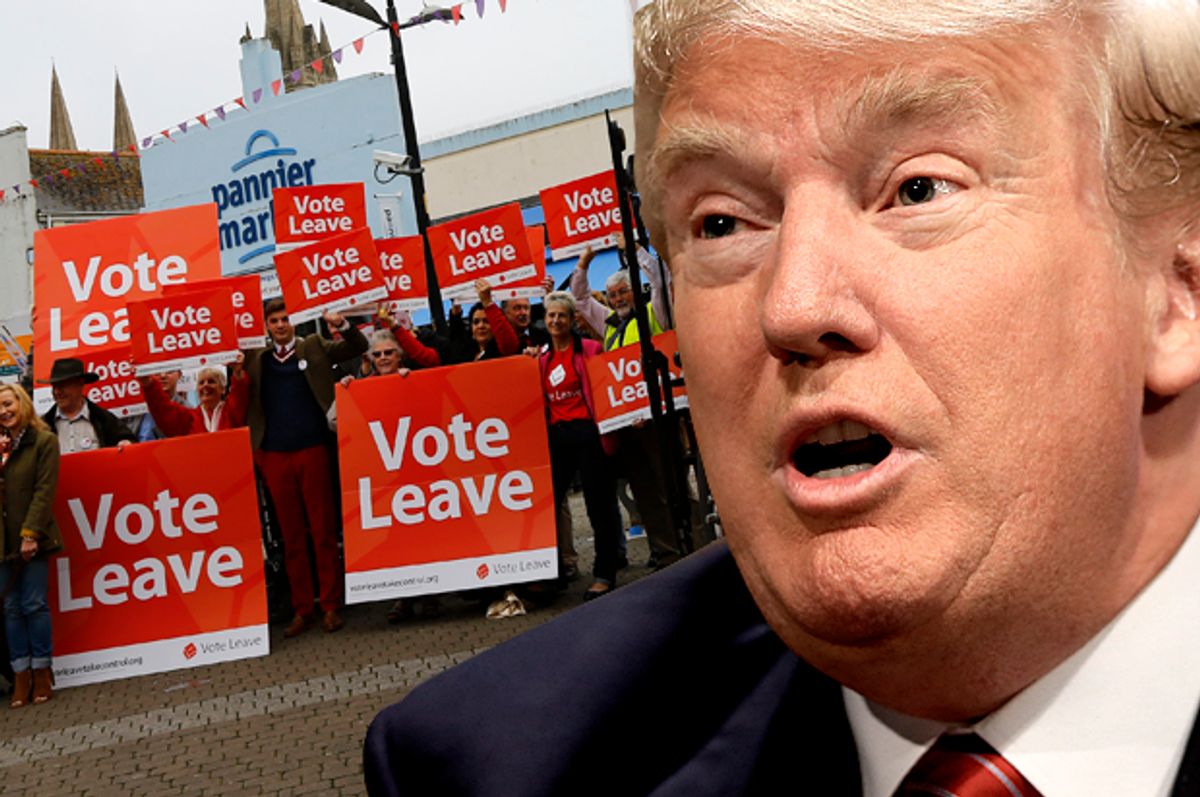 Monday, the West Midlands police report, a halal butcher shop was attacked by what appears to be a Molotov cocktail in the Pleck borough of Walsall, a mid-sized English city near Birmingham. Luckily, no one was seriously hurt, but the pictures of the incident published on the BBC show extensive damage to the shop. Police are looking for a white man about 6 feet tall who was seen entering the shop.

While the police in Walsall say they intend on "keeping an open mind as to the motive", the bombing does look like it fits into the surge of reports ofanti-immigrant and racist violence Great Britain is experiencing in the wake of a national referendum where voters chose to leave the European Union. The Leave campaign to leave the E.U. was overtly nationalist, playing on fears of immigration. With the Leave campaign winning, racist forces appear to feel vindicated and are acting out some of their ugliest desires.

The whole thing demonstrates something fundamental about the psychology of bigotry: Bigots really are sensitive to the force of public opinion.

Social opprobrium is fairly effective at shaming bigots into curtailing or even, in some cases, rethinking their opinions. But the converse of that is even more true: When bigots see evidence that of widespread public support for their opinions, it empowers them to act out.

Often, at the first hint that large numbers of people may agree with their wretched views on white supremacy (or other, related prejudices regarding gender or sexual orientation), racists rush forward, feeling freed to hurl racist invective, wallow in white supremacist chatter, or, as we are seeing in the U.K., even commit violent acts in the name of racism.

Al Jazeera reports that various spokespeople for immigrants in the U.K. are complaining about a rise of racist abuse at the hands of bigots who are empowered by the Leave campaign's big win. There have been reports of graffiti and signs reading, "No more Polish vermin" plastered in Polish immigrant-heavy neighborhoods in England.

While reassuring the public that "the vast majority of people are continuing to go about their lives in safety and security", Mark Hamilton of the National Police Chiefs Council also noted that, "we are seeing an increase in reports of hate crime incidents to True Vision, the police online hate crime reporting site."

There are similar troubling signs of increased tensions, boiling over into violence, in the United States. On Sunday, a white supremacist rally in Sacramento turned violent as a group of anti-fascists clashed with the racists, resulting in 10 people being sent to the hospital, many with stab wounds.

Unsurprisingly, the white supremacists, which go by the name the Traditionalist Worker Party (TWP) , are trying to foist all the blame for the violence onto the protesters when speaking to the media. However, on its own webpage, TWP is fundraising by bragging about how much more damage they did than the anti-fascists, despite being wildly outnumbered:

Our Golden State Skinhead comrades went up against over ten-to-one odds and won! Regretfully, one of our men was injured and is currently in the hospital, though at least five of the antifa who instigated the violence with their cowardly tactics and improvised weaponry were sent to the hospital. Absolutely all of the credit goes to the Golden State’s courageous warriors, proving that proven street fighters are absolutely vital to our sacred cause of defending our White American families.

Despite the facile, ass-covering claims of self-defense, it's clear that this group, with its bragging about cultivating "street fighters", puts violence at the center of its white supremacist mission.

One of the event organizers, Matthew Heimbach, grabbed headlines in April when he was caught on camera at a Donald Trump rally shoving and screaming at a young black woman.

“White Americans are getting fed up and they’re learning that they must either push back or be pushed down," Heimbach wrote, after the incident.

That the previous incident happened at a Trump rally is not a coincidence. Just as the Brexit vote is being taken as a signal by British racists that they have public support to act out, Trump's campaign is signaling to American racists that this is their moment.

As Peter Montgomery of People for the American Way explained in April, the Trump campaign is " electrifying and energizing the white supremacist movement."

White supremacists, the Washington Post reported in February, see the Trump campaign as a massive opportunity to reinvigorate a movement that was dying due to the social stigma against overt racism. In Trump, they see evidence that their beliefs are held by a much larger group of people than they had previously been believed, and they see this as a chance to turn people who are merely bigoted into hardened racists.

It makes a lot of sense, and not just because Trump says overtly racist things about Muslims and Mexican immigrants, either. The whole discourse about "political correctness" feeds is fuel for the white supremacist fire. When conservatives whine about "political correctness", they are fundamentally complaining about having to stifle some of their more offensive opinions, lest they dare — gasp! — face social disapproval for their views.

Well, this is the central drama of white supremacists, who chafe against a society they view as cruel and censorious for thinking overt racism is icky. So when they hear Trump ranting about "political correctness", they feel like someone really gets them. And since that someone is the Republican nominee for president, they feel empowered to act out on their views.

Which, in turn, leads to violence. Sometimes the violence is the result of clashes with anti-racists, as happened in Sacramento and in a similar event in Los Angeles. In November, white supremacists opened fire on a group of Black Lives Matter protesters in Minneapolis, hitting five people with bullets. And, of course, there is the violence that has erupted at Trump rallies.

In some of these incidents, the bigots started the violence, and in others, the anti-racists, sadly, gave into the urge to shove or punch first. But the common theme here is that white supremacists are on the move, feeling emboldened by the Trump campaign and a general surge in right wing populism. As with the Brexit vote in the U.K., bigots are clinging to any evidence they can find that they are speaking for a large population of fellow racists that are merely cowed by the forces of "political correctness" from agreeing openly with them. Whenever they get that evidence, from Trump's poll numbers or the vote for Leave, they act out with more confidence that they have popular support.