A cultural evolutionary explanation for the not-so-surprising Brexit outcome 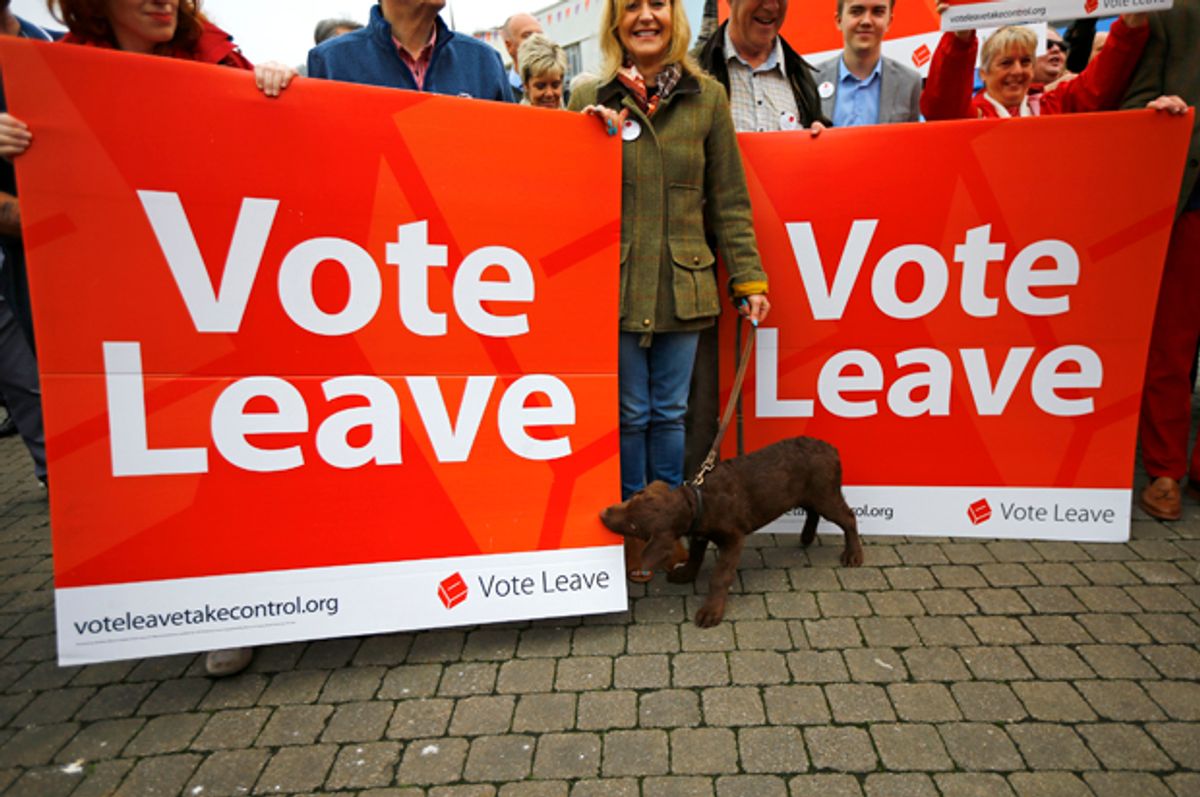 The Brexit vote caught most elite observers by surprise and has spurred a flurry of talk of further possible defections from the EU. But one person who was not so surprised was Peter Turchin, an evolutionary anthropologist at the University of Connecticut, author most recently of "Ultrasociety: How 10,000 Years of War Made Humans the Greatest Cooperators on Earth."

Although Turchin, like most other observers, had expected Brexit to fail narrowly, his attention was focused primarily on a strikingly different confluence of background trends at work, leading him to expect an ongoing increase in dis-integrative processes across Europe. So Turchin's surprise was qualitatively different than that of others. “I didn't expect that my prediction of the EU's demise would be endorsed so quickly,” he tweeted after the vote, linking a blog post, “Will the European Union Survive its 60th Anniversary?” Turchin sees EU disintegration as almost a certainty in the near term, but believes there's a chance to start over, on a sounder footing, if the right lessons are learned. And he believes it's a vital enterprise, not just for Europe, but for all of us.

What sets humans apart isn't simply our intelligence, Turchin notes, but our capacity for cooperation, which is what makes it possible for us to even have a history in the first place. That capacity waxes and wanes cyclically, but also grows cumulatively over time. Turchin coined the term “cliodynamics” to denote this approach to studying these dynamic patterns in human history.

“We live in huge societies of hundreds of millions of people, and we don’t really understand what makes them function,” Turchin told me last November. “What makes them function is cooperation, and so what we know from studying history, is that cooperation tends to go up and down in cycles. So right now all the indicators we have, we in the United States, and also if you look at the European Union, we are in a down cycle of cooperation, and cooperation is unraveling.”

At the time, I focused on the U.S., but in light of the Brexit vote, it's vitally important to learn what lessons cliodynamics can help us to learn. In addition to the problems of mass immiseration and elite overproduction, the EU suffers from another pair of macrohistorical problems Turchin has studied, “the disappearance of an external threat (represented by the Soviet Union) and imperial overstretch resulting in gobbling up too much territory to the east and south.”

The European Union was a wonderful idea, but I am afraid that it is now dead. I place most of the blame on the European elites. I can’t help but think that if only the EU had stayed within the historical boundaries of the Carolingian Empire, the outcome would be very different.

The Brexit vote seemed clearly in line with that sentiment, so I began by asking Turchin to explain the thinking behind it.

What were your reasons for thinking that? You've used the term "metaethnic community,"  how does this help us understand the original EU?

So, the question is, “Where do these identities come from?” From a cultural evolutionary point of view, they come from very deep history, so it's very common when you have some empire which was quite powerful and prestigious. Such an empire, when you look back at what underlies the European Union, it's clearly the Carolingian Empire [800–924], because if you look of the original countries that signed the first treaty in 1957 [Treaty of Rome], they almost precisely trace the boundaries of the Carolingian empire. And so the idea of Europeanness, basically can be traced to that.

Then, the identity that Carolingian Empire left after it broke apart was known as Latin Christendom. So basically these were the Christians who had an emperor, which had at some points very little power, and the Pope as their leader. Of course, they fought each other. The French and Germans fought each other all the time, but when they were faced with outsiders like in the Crusades, they actually cooperated. So the Latin Christendom as distinguished from Orthodox Christianity is actually basically similar to what Samuel Huntington called “the clash of civilizations.”

So what I would argue because of cultural evolution you can actually destroy things, in one fell swoop, but it's much harder to build them. So when you build an identity — and you have an identity that underlies a cooperating group — you want to expand this identity gradually in steps. Instead, the big mistake, in my view, was the over-expansion of the European Union beyond what was traditionally Latin Christendom, essentially, and outliers, fringes like Britain and Denmark, and especially to formally Orthodox areas, which have a very different set of institutions, in many ways. So that becomes quite difficult, not just to cooperate but also to ordinate. Basically the idea is that you build by taking small steps, that's how you achieve positive change.

The Carolingian Empire was a long time ago. How can we understand the EU's achievement against the record of what's happened since then?

After the Carolingian Empire, there were several attempts to unify Europe. One of them, which is actually quite close to the modern EU, was the Habsburg Empire, because it was also constructed by essentially consensual means. It was not conquest, it was a series of very unlikely dynastic marriages—it was like 10 or 12 dynastic marriages which brought about it all together, but it didn't last beyond Charles V. And of course there were two violent attempts—the Napoleonic Empire and the German Wehrmacht—which also didn't work. So, the latest one was actually quite good, except they extended far too fast, and that's one problem.

So to me the other really big—not really mistake—the choice that European elites made was when the neoliberal ideology—which the modern one was born in the United States and rapidly spread to UK, and more gradually spread into Europe. Basically, for whatever reason, the European elites have adopted the neoliberal views en masse, so they basically by doing that they betrayed their populations, in the following ways.

First of all, they neoliberalism freed them to pursue selfish things. So reducing taxes on themselves, and things like that. Secondly, they turned globalists, so a political leader in Denmark the reference group for them are other people in the UK and US who are also politicians, and wealthy, and they don't really seem to care very much about their population. There's this disdain of people, it's very clear in their conversations. many of the political idiots are aghast at what happened with Brexit, they say, “It's a stupid population,” “What fools!” “What are they doing? Don't they understand?”

So, the Brexit to me is just part of this whole process of unraveling cooperation in Europe. Greece was the first to go, but remember you have things like national independence movements like Scotland, and Catalonia, then you have dysfunctional governments in Belgium, for a whole year, they did not have national government, it was it was so dysfunctional. That's one of the reasons why the ISIS attack was so successful there. Spain just voted — they don't have a functional government in Spain. I don't know going forward they will actually elect somebody. So now you have Brexit, and [the] Leave [campaign] so all those signs, the rise of both rightists and leftists, the right and the left Eurosceptics movements, I see that as a backlash against the elites following their betrayal, rather than 53% of UK population are fascists — I don't think so.

Another facet of declining cooperation is the role of unbridled elite competition—to the point of disgruntled elites leading popular rebellions, as figures like Donald Trump and Boris Johnson have been trying to do. What can you say about them?

They're just perfect, they are just the kind of elite entrepreneurs who actually mobilize the masses. You look at all the civil wars, they are never lead by peasants — almost never — and when they are those peasant rebellions get slaughtered almost immediately. They're always led by the elites, by counter-elites, so Trump, the Donald, is actually a good example, because he's a billionaire for God's sake, and what is he doing there pushing the populist message?

And Boris [Johnson] is also a member of the elites, he went to Eton and Oxford, for God's sake. And of course Trump had this reality show, right? “You're fired!” Johnson also, I forget the name of it, but he was a very frequent guest or participant on one of those shows in UK, that's how he became well-known. it's also how he became very good at communicating and also probably pretending, I don't know.

So this what we see, we see all these elite entrepreneurs who basically, to forward their political ambitions, they feed on that distrust of the established elites and are quite successful at doing it.

So what possible ways forward should the EU be trying to find?

I have actually a rather drastic suggestion. Culture revolution succeeds by wiping off bad arrangements, and replacing them with good ones. I know nobody's going to follow me up on this, but I would wipe the slate clean and start a new European Union, because I think we need European Union. So what's more likely to happen, I think is things will be muddling along, and so the good outcome would be if there would be a core Europe—so something like France Germany Italy Benelux Austria, and perhaps Spain and Portugal.

I would actually prefer elections to—right now the bureaucrats in Brussels, they don't really respond to the popular wishes, I mean there's the European Parliament, but it doesn't really do much. So there's got to be a better set of institutions that would channel popular desires into policy, so basically what needs to be done is to do some creative destruction here, hopefully without anybody getting killed.

I don't know precisely what kind of institutions would work but I know that the present set didn't work, and so it has to be changed dramatically, and I think the way to do it is for core set of states, maybe even just France, Germany, Benelux to start, evolve a better set of institutions, and then slowly accept more members. And there is some talk of that. So, those are my thoughts.