Cheering the High Sparrow's death: Why the end of this "Game of Thrones" villain was so satisfying

The Faith Militant were religious populists, yes — and also brutal thugs whose punishments were unjust 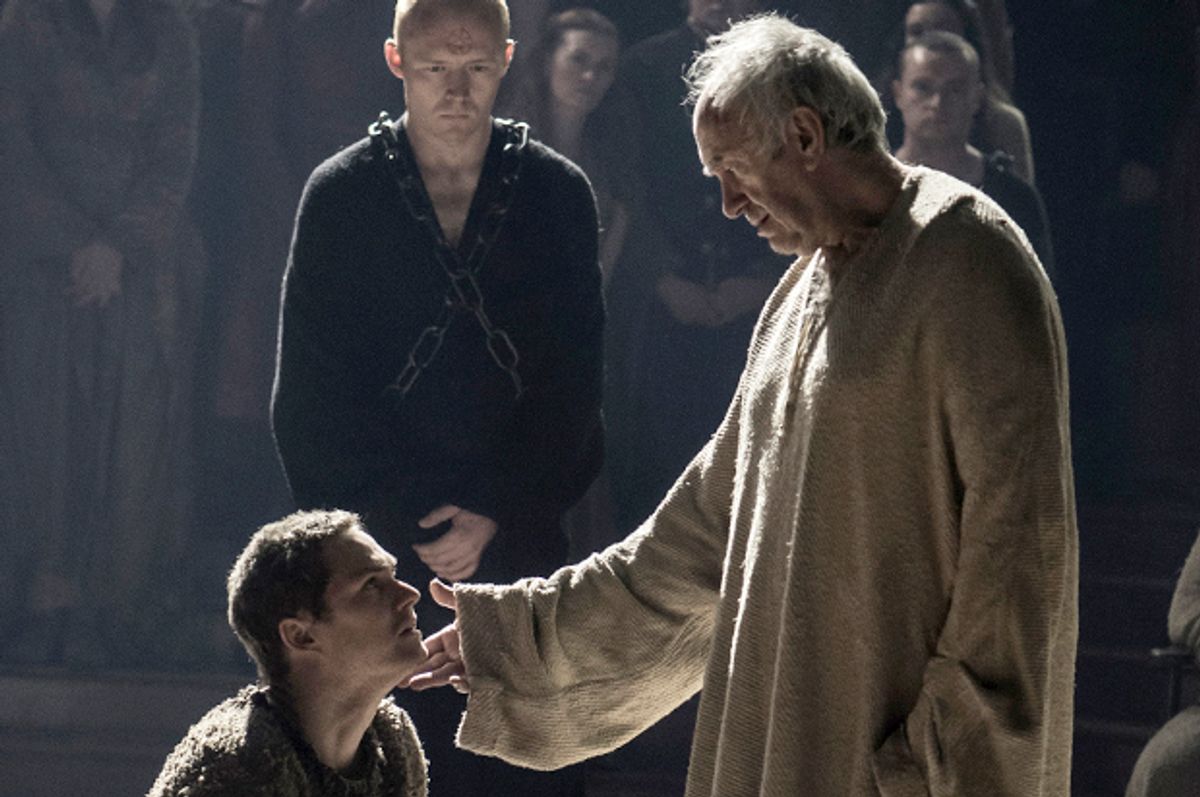 After the "Game of Thrones" season finale saw the demise of the High Sparrow, conservative New York Times columnist Ross Douthat took to Twitter to make some strong insinuations about imagined liberal hypocrisy. Douthat claims that critics unanimously loathed the character whose clear modern analogue is the devout Christian, and suggests that liberals hate the spiritual more than they care about the values they ostensibly champion.

“[R]eactions to the High Sparrow from GoT recappers were quite fascinating in their hostility,” Douthat writes, going on to claim that “[o]n the show + the books, he's an apparently sincere man of the people, one of the few commoners to play a political role in Westeros. He champions equality before law, redistribution of wealth — ideas far closer to liberal values than anything his antagonists support.”

Douthat claims that the reaction has broader societal implications, further writing, “My point is just that it says something interesting about the story itself and (especially) our pop culture mavens that so many ppl identified w/the privileged warmongering aristocrats in their struggle to crush the story's lone popular uprising.”

Douthat's sole citation links to a recap by the New Yorker's Sarah Larson, characterizing, “this one's glee at his downfall” as “the ne plus ultra of the [fascinatingly hostile] genre.” Larson's recap was less gleeful about the death of the High Sparrow specifically than the thrillingly fast-paced nature of the episode generally, though she did point out the delicious irony that his murder was carried out by poor children, arguably the most vulnerable of the commoners he claimed to represent. (This narrative about the High Sparrow's mandate is one Douthat has apparently rushed to embrace, likely because it supports his own narrative about progressive disdain for the working class.)

There are, of course, reasons to delight in the death of the High Sparrow unrelated to religious bigotry or disregard for the poor. The High Sparrow did seem genuinely interested in alleviating poverty, and was interesting to viewers despite his ideological purity when this seemed to be his area of focus. Naturally, that is largely because it is a cause justifiable on non-religious grounds. Atheists and people of all faiths can also rally behind housing the homeless and feeding the starving. I, personally, bemoaned the High Sparrow's abrupt pivot to staunch homophobe, and would have enjoyed and likely rooted for a religious leader mainly interested in upending the social order to improve the welfare of the poor. Margaery, whose death fans are still mourning, went from fascinating to loveable when it became clear that she was interested in ruling with kindness and generosity as well as savvily navigating complicated power dynamics.

“The law” that concerned the High Sparrow was not the law of the State but religious doctrine in a kingdom that almost seemed pluralistic by default, with its key players too concerned with vying for power in this life to care about the next. Equal application of an inherently discriminatory law that derives its moral authority entirely from religious text, without regard for the spiritual beliefs of those to whom it is applied, is not a liberal value. (One is reminded of a rueful Anatole France on the “majestic equality of the laws, which forbid rich and poor alike to sleep under bridges, to beg in the streets, and to steal their bread.”) The High Sparrow's dispiriting tendency to demand religious conformity with might was perhaps his most loathsome quality. His martyrdom might have been acceptable, heroic, even, if he hadn't consigned Margaery and the citizens she exhibited clear concern for to the same fate, either by stupidity or by actual indifference to their lives. Forced martyrdom isn't martyrdom at all. It's murder.

In fact, the High Sparrow's punishments were not uniform, but instead both highly selective and highly gendered. As he points out during one of their confrontations, Jamie brazenly flouts his sins, yet faces no threat of coerced atonement. The High Sparrow himself confesses to Margaery that he used to lead a self-indulgent, hedonistic, and thus deeply sinful, life. But he was conveniently exempt from the punishments he generously doled out to others. For him there would be no jail time, no starvation, no beatings, no mutilations, no naked marches through the streets with nuns trained in brutal torture shouting “SHAME.” Margaery might have asked him how he finagled his way out of this fate, were she not too concerned at the moment of negotiating her way out of prison.

As a general rule, "Game of Thrones" writers tend to overestimate their audience's appetite for agony, with dismal results. We celebrated the death of Ramsay not just because he was widely reviled, but because he had a seemingly infinite supply of victims and he never tired of victimizing them. We, of course, tired of seeing them victimized. Though the High Sparrow never carried out merciless beatings himself, we knew many of our key players were confined to cells at his request, and it wasn't fun or particularly interesting to watch. We wanted to get on with it. When the person carrying out prolonged torture is intractable, as the High Sparrow was, we root for his swift, merciless exit. Hostility toward the High Sparrow isn't just about him as a person, but his function as a character.

Because, at the end of the day, that's all he is. When recappers have broadly uniform reactions to a plot point, be it positive or negative, we must at least consider the possibility that they are driven by their pop culture expertise and not political bias. Audiences don't exclusively root for characters whose ideology they share; they root for characters who are nuanced and multidimensional and complex. Zealots of any stripe, by definition, are not. Douthat is right about one thing, however. It does indeed say something very interesting about a commentator when he imagines they are.