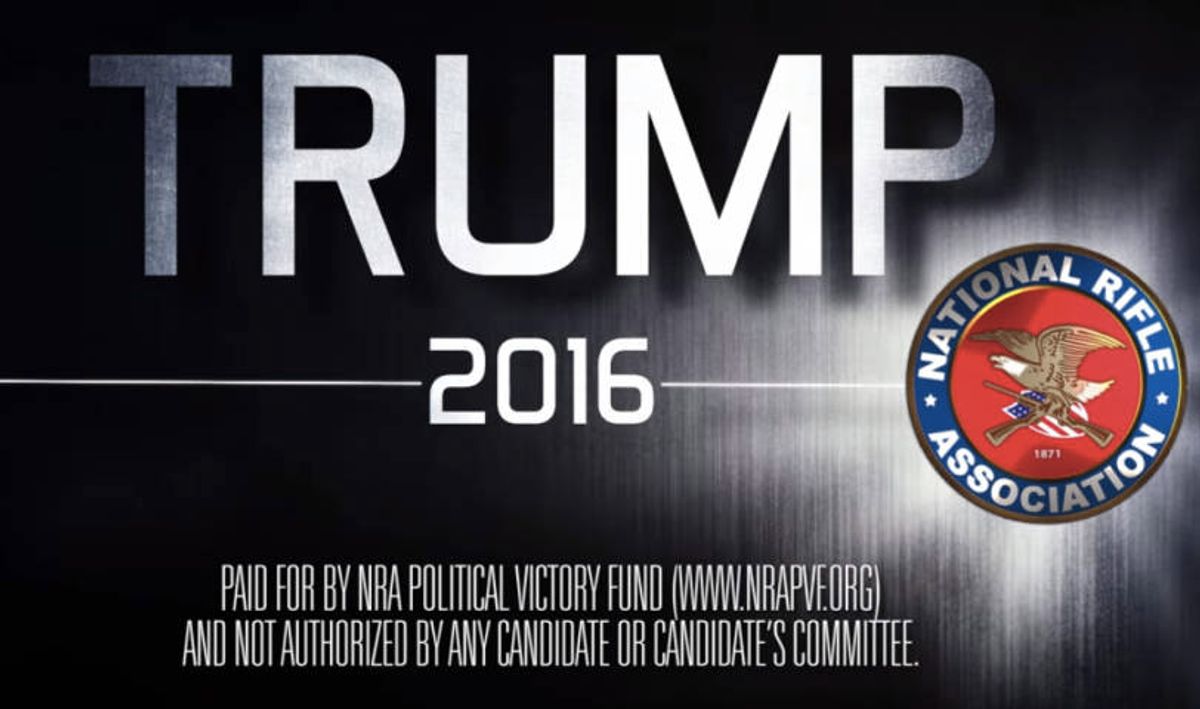 In the month of June, Hillary Clinton's campaign and allied groups outspent Republican rival Donald Trump by a whopping $26 million to $0 in the key battleground states, according to NBC News. The Clinton campaign has spent nearly $9 million in ads only, while groups like the pro-Clinton Super PAC Priorities USA have spent an additional $17 million. Now, a series of polling in seven battleground states show Clinton leading Trump across the board.

While Trump's campaign barely begins to show any signs of seriousness, at least one prominent outside group backing the controversial candidate is out with an ad buy on his behalf.

The NRA's Political Victory Fund, the political arm of the nation's largest gun lobby, launched its first campaign ad of the political cycle after the NRA endorsed Trump back in May. According to USA Today, the group plans to spend $2 million on this campaign.

The 30-second ad titled, “Stop Clinton, Vote Trump,” will air on national cable and on broadcast channels in the battleground states of Colorado, Ohio, Nevada, Florida, Virginia and Pennsylvania.

“A lot of people say they’re not going to vote this November because their candidate didn’t win; Well, I know some people who won’t be voting this year either,” Mark Geist, a Marine Corps veteran and Benghazi attack survivor, says in the ad as he walks through a cemetery.

“Hillary as President? No thanks. I served in Benghazi. My friends didn’t make it. They did their part. Do yours.”

Geist, who co-authored 13 Hours: The Inside Account of What Really Happened In Benghazi and endorsed Trump for president in February, also appeared in an earlier ad for the NRA linking the terror attack in Libya to gun control in the United States.

“The stakes in this election for law-abiding gun owners have never been higher, and the NRA will use all available resources to ensure that voters understand the consequences of a Hillary Clinton presidency on their fundamental right of self-defense,” said Chris Cox, chairman of the NRA Political Victory Fund.