In the Will Smith movie heyday of the first "ID4," July 4 was huge—and a mass culture event on a major holiday 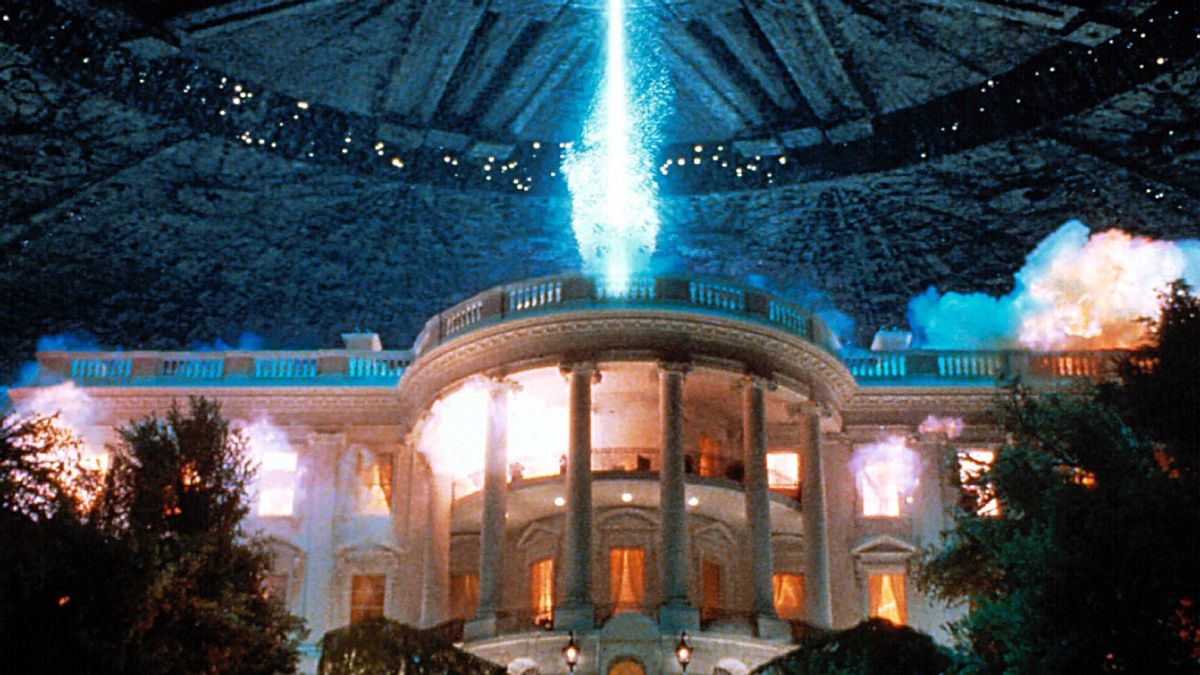 If George of the Jungle had to worry about running into a tree, there’s an even more treacherous obstacle in Tarzan’s path: Watch out for that box office.

“The Legend of Tarzan” is set for a collision course this weekend when the David Yates-directed apeman reboot swings into 3,450 locations. Currently, BoxOffice.com is projecting that the film, which stars Alexander Skarsgård (“True Blood”) as Tarzan and Margot Robbie (“Suicide Squad”) as Jane, will open to just $23 million—en route to finishing with $50 million in the bank by the end of its run. For a movie with an $180 million tab, those numbers are abysmal, yet another of 2016’s pricey misfires.

Its fortunes will not be aided by reviews, which have ranged from bad to savage. The Wrap’s Alonso Duralde compared it to notorious bombs like “The Lone Ranger” and “John Carter.” David Ehrlich of IndieWire was even less kind: “There’s a whiff of desperation about pulling a literary figure like Tarzan down from the tree line and forcing him to live at our level—it’s why you’ve been laughing at the marketing of this film for months. And now the finished product is finally here, and it earns the worst of your preconceptions, reintroducing Edgar Rice Burroughs’ immortal character as just another overpriced commodity.”

If you’re asking yourself why we needed another Tarzan movie in 2016 (200 films with his name in the title have already graced screens large and small), there’s another question at hand: Whatever happened to the Fourth of July movie?

In the 1990s and early 2000s, our nation’s birthday became a lynchpin of the studio release calendar, arguably the centerpiece of summer movie season. The face of the moviegoing holiday was Will Smith, the former “Fresh Prince of Bel-Air” star who made his name on the silver screen as a staple of mid-summer tentpoles.

After making his name as a major draw in Michael Bay’s “Bad Boys,” Smith launched the movie that would announce his status as “Mr. July”: the aptly-named “Independence Day.” Co-starring Bill Pullman (“Spaceballs”) and Jeff Goldblum (“Jurassic Park”), the Roland Emmerich-helmed disaster film all but printed its own money in 1996. At the time, Its $817 million worldwide haul was the biggest ever for a studio film (the unstoppable behemoth that was “Titanic” would be released the following year).

While “Independence Day” is undoubtedly cheesy, there’s a reason that the film has proven so iconic in the two decades since its release. Its cheerfully naïve optimism about the human condition is difficult to resist—from a presidential address delivered in accidental couplets ("We will not go quietly into the night!/We will not vanish without a fight!”) to a drunken Randy Quaid flying into the mothership to save humanity from destruction. “Independence Day” is brainless jingoism, but it’s damn fun, and the sight of DJ Jazzy Jeff’s bandmate beating up an alien (“Welcome to Earth!”) never gets old.

Following “Independence Day,” Smith put out a miracle string of films that did huge numbers on the July 4th holiday weekend. The next year boasted the release of “Men in Black” ($589 million worldwide), and in the next decade, Smith would have comparable success with “Men in Black II” ($441 million) and Hancock ($624 million). “Wild Wild West” ($222 million) would have been another feather in his cap if not for its hefty price tag and very poor critical reception; it won the Razzie for Worst Picture in 1999.

Smith’s success with the July 4th release date paved the way for a number of other blockbusters to launch on the day of barbecues, hot dogs, and family picnics. Bay released all four “Transformers” movies on Independence Day, while “Spider-Man 2,” “The Perfect Storm,” “Armageddon,” “The Twilight Saga: Eclipse,” “Terminator 3: Rise of the Machines,” and “War of the Worlds” all bowed over the holiday weekend.

The quality of these entries varies widely, but they had one thing in common: They put butts in seats.

Hollywood has struggled to match that success since. The last unqualified Fourth of July smash was “Despicable Me 2” back in 2013, while the holiday has been beset by a series of disappointments in recent years. “Earth to Echo,” Disney’s found-footage “E.T.” ripoff, finished with just $45 million in 2014, while its competition, “Tammy,” marked Melissa McCarthy’s first-ever critical and commercial clunker. Last year, a pair of sequels both underperformed: “Terminator: Genisys” and “Magic Mike XXL.”

“Tarzan,” which cost $180 million, looks to continue that trend. Meanwhile, none of this weekend’s Fourth of July entries—not even Steven Spielberg’s family-friendly Roald Dahl adaptation, “The BFG”—is slated to end its run with more than $100 million domestically. Even “Independence Day 2” couldn’t break the curse: The Liam Hemsworth-fronted sequel nobody wanted is likewise flailing in theaters.

To a certain extent, this is a matter of happenstance. Studios can’t control which movies make money and which don’t (or Taylor Kitsch would be a much bigger star than he is), and many of the movies that flopped were—at one time—expected to do well, or at least better than they did. Disney sunk $225 million into “The Lone Ranger,” and releasing it on Independence Day was a sign that the Mouse House hoped to milk it for every dollar the notorious bomb was worth. When it comes to making big-budget tentpoles, you market the hell out it and hope for the best.

But the fact that the July 4th holiday has been associated with so many duds in recent years may have convinced studios to push their surefire hits to other dates. In 2016, the biggest movies of the year so far all opened well before schools let out: “Captain America: Civil War” opened in early May, while “The Jungle Book” debuted in April. “Zootopia” was a March release.

This has to do with the strange voodoo of deciding when to release a movie—which is based less on exact science than outright superstition. For instance, when “The Help” made bank at the beginning of August, a number of other movies with black casts were all put out the very same weekend in the following years: “Get on Up,” “The Butler,” “Sparkle,” and “Straight Outta Compton.” This year’s contribution to the trend is “Morris From America.” The A24 release is about a 13-year-old boy who moves to Germany with his father, played by Craig Robinson of “The Office.” Is there a logic to that strategy? Not really. Black audiences want to see good movies whenever they open, not solely on one weekend a year.

But that’s how it works in Hollywood: When something does well, you replicate its success until it’s no longer profitable. That leads to a surfeit of industry dogma that’s based on nothing more than that’s the way things are done. For example, until recently, February was reserved for rom-coms and studio trainwrecks (see: “Jupiter Ascending”). The idea was that people don’t see movies in the winter a) because of the weather and b) they’re cutting back on expenses after the Christmas season. Then “Deadpool” and “The LEGO Movie” debunked that myth.

But if the industry is letting seasonal tommyrot guide its decision making, that’s a shame. During the Will Smith era, the Fourth of July was the third-biggest moviegoing day of the year, one of the few times that Americans were all expected to go to the movies together. When I saw “Independence Day” in the theaters 20 years ago, the movie was standing room only. People squatted in the aisles and sat on each other’s laps, breaking nearly every fire code imaginable to see humans fight off space evil.

That mass participation is also part of the film’s appeal. Lindsay Robertson, the former digital editorial director for the Tribeca Film Festival, argued in a critical round-up of 4th of July films that “Independence Day” is “less like a movie and more like a sports event.”

“I saw Independence Day five times in the theater,” Robertson said. “The reason I kept going back was the thrill of being part of an audience all experiencing the same emotions at the same time—and cheering, yelling, clapping, jumping up, whooping at the end together. ... It's easy to forget that one reason we go to the movies is to see them with other people.”

The universal experience of film (part of what’s often referred to as “monoculture”) is increasingly rare in a fragmented entertainment landscape where we have more options than ever. If yet another movie about a jungle boy being raised by apes doesn’t sound appetizing, audiences can stay home and watch Netflix, HBOGo, or Hulu. Movie theater attendance has been steadily declining since 2002, and if current ticket sales hold, 2016 will be one of the worst years since 1995, the year before “Independence Day” was released.

Don’t let the nostalgia fool you: “Independence Day” is no masterpiece. But facing down yet another year without an heir to its summer movie throne, it’s looking pretty good.