Ted Cruz, we hardly missed ya: McCarthy tactics and conspiracy theories at his terror panel 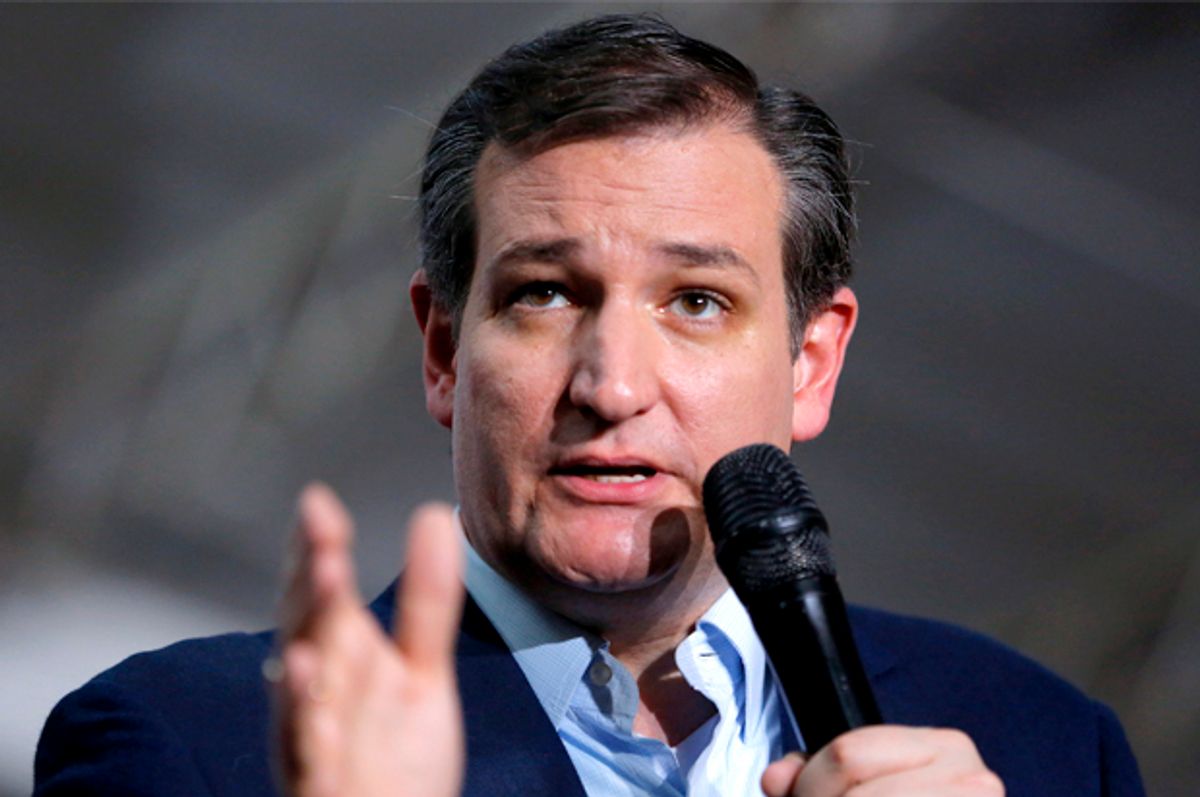 With the Donald Trump carnival barker show going on, it's easy to get distracted and miss the fact that congressional Republicans are devolving ever further into their Joseph McCarthy spiral these days, using congressional panels to advance conspiracy theories and put together threatening blacklists, targeting Democrats and pro-choice activists.

Now the same strategy has been used, under the leadership of Sen. Ted Cruz, to imply that two sitting congressmen are somehow involved in terrorism.

Sam Stein and Jessica Schulberg of the Huffington Post report:

The charge was leveled by Chris Gaubatz, a “national security consultant” who has moonlighted as an undercover agitator of Muslim groups that he accuses of being terrorist outfits, and it was directed at Reps. Keith Ellison (D-Minn.) and André Carson (D-Ind.). At the heart of his accusation is the attendance by those two members at a 2008 convention hosted by the Islamic Society of North America — a Muslim umbrella group, which Gaubatz claims is a front for the Muslim Brotherhood.

The Islamic Society of North America (ISNA) is not a Muslim Brotherhood group. It's one of those bland religious umbrella groups, like the National Council of Churches, the YMCA or the Jewish Federations of North America — groups that might have some political missions, but mostly exist to nurture their religious communities.

ISNA does stuff like running match-making services for young singles, hosting summer camps and conducting an initiative to help "green" mosques. Interfaith work is a big part of their mission, which is why they've had a reform rabbi speak at one of their conferences. Like similar umbrella organizations of other religions, their messaging shows that they try to bring both the progressive and conservative elements in their community together under a banner of shared faith.

But, to conspiracy theorists, all this bland soup-kitchens-and-summer-camp stuff is little more than a cover-up for ISNA's supposedly sinister dealings. The anti-Muslim conspiracy theory internet, most recently seen forwarding a fake story about Syrian refugees raping a little girl, is all about pushing dark accusations against INSA. And now, thanks to Cruz, those idiotic conspiracy theories are now being spouted at congressional panels.

Gaubatz's testimony would be more suitable for Alex Jones' conspiracy-o-rama talk show "Infowars" than for a congressional panel.

"I attended a convention in Columbus, Ohio, in 2008, organized by Muslim Brotherhood group, ISNA, and both the Department of Homeland Security, and the Department of Justice Federal Bureau of Prisons had recruitment and outreach booths,” Gaubatz told the panel.

The fact that the DHS and the FBI had panels at an INSA event should be solid evidence that security officials, the people who actually understand this stuff, believe this group is not some kind of front for terrorist activities.

The likely reason the DHS and FBI were there is not particularly mysterious. As the FBI director James Comey was forced to remind the public, intelligence officials spend a lot of time cultivating ties to and trust with Muslim communities across the nation as part of their efforts to prevent terrorism.

"They do not want people committing violence, either in their community or in the name of their faith," Comey explained in a recent press conference. "And so some of our most productive relationships are with people who see things and tell us things who happen to be Muslim."

Reps. Carson and Ellison did speak at an INSA convention in 2008, but they were there to — shocker! — speak about mobilizing Muslims politically. It is worth remembering that both Carson and Ellison are pro-choice, pro-gay Democrats, i.e. not exactly the kind of people who are going to be friendly to the kind of fundamentalist Islam that underpins Islamic terrorist activities.

Huffington Post reached out to Cruz for comment but, no surprise, he didn't return their calls. So there's no way to know if he knew that Gaubatz was going to let fly with such a horrible statement.

Still, Cruz cannot be presumed innocent here. That Gaubatz would say something incendiary, racist, and flat-out wrong was almost guaranteed, as Gaubatz's entire career is based on such rhetoric. Gaubatz works with his father, P. David Gaubatz, on spreading rumors and conspiracy theories about Muslim organizations like INSA and Council on American Islamic Relations (CAIR).

The Gaubatzes' big coup was stealing a one-page strategy document from CAIR, which they used to accuse the organization of some kind of terrorist plot to infiltrate the government for the purposes of evil. But if you actually read the damn thing, it's a standard issue political strategy document, the kind you'd find in any organization, that is focused in strengthening their brand and improving Muslim representation in government.

And, no big surprise here, the elder Gaubatz is a birther who accuses President Obama of being a "Muslim" and a "crackhead", and believes that Obama is trying to institute "Sharia Law".

When asked about his father's views on this front by Talking Points Memo, the younger Gaubatz demurred, saying, "Obama's religious affiliation has nothing to do" with his efforts to paint CAIR as a front for terrorists.

This stuff is par for the course when it comes to Cruz, however. Cruz invited Frank Gaffney to be a security advisor on his campaign, despite Gaffney's history of birtherism, anti-Muslim conspiracy theories, and general bigotry towards Muslims.

There's not much that can be done to stop nutty, paranoid people from raving on the internet, of course. But one thing you can do is not invite these clowns to speak in front of a congressional panel. That Cruz was so irresponsible is a cold, hard reminder that Trump is hardly an outlier in the Republican party. The racism and anti-intellectual bent is endemic in Republican circles.