The sunset of the Benghazi "scandal": Endless GOP investigations and no smoking gun 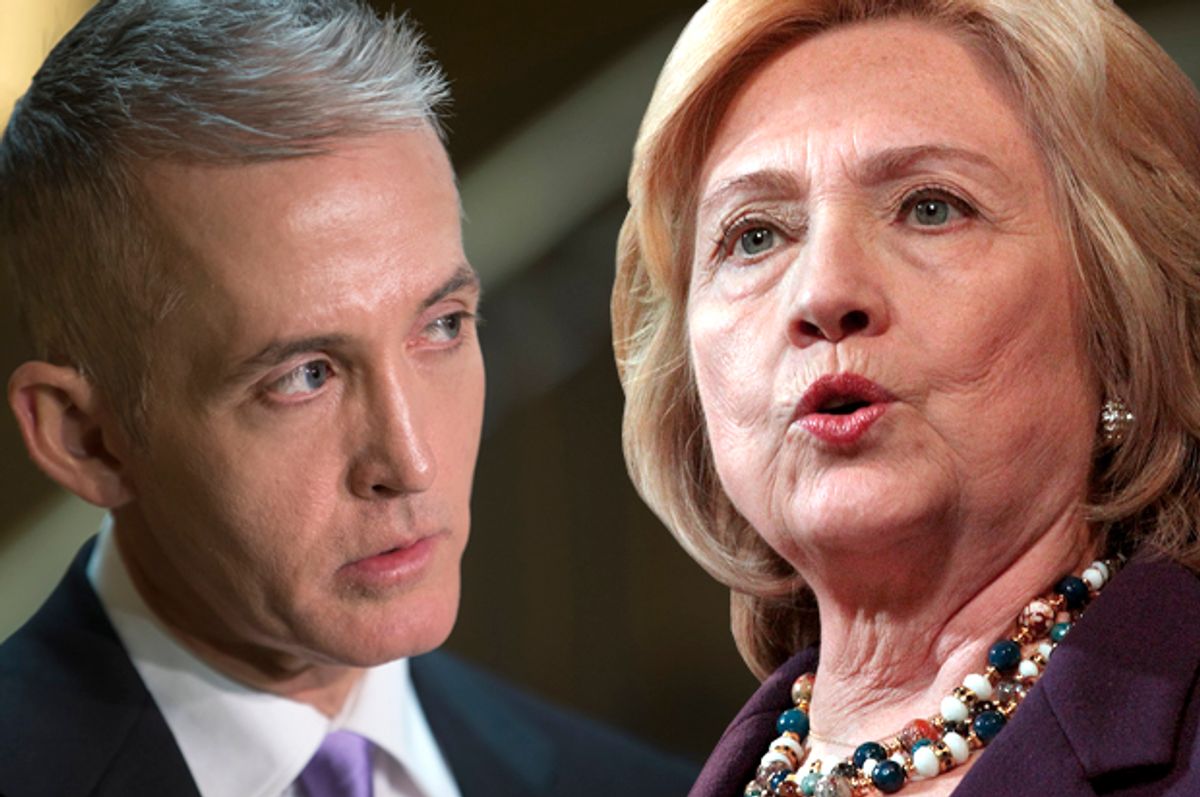 After two years of investigations, hearings, and allegedly spending time on the all-important task of buying monogrammed handguns, the House Select Committee on Benghazi released its final report on Tuesday. Here are some interesting numbers associated with the end of this exercise:

Number of pages of the final report: 800

Number of pages of the final report issued by Congress after investigating the attacks of September 11, 2001: 585

Number of hours the Select Committee grilled former Secretary of State Hillary Clinton live, on national television, about her role in the attacks: 11

Number of times Clinton broke into a sweat as she batted away the Republicans’ inane questions during said grilling: ~0, but thanks for the free campaign ads, folks.

Number of congressional inquiries, including this one, conducted by Republicans into the Benghazi attack in the last four years: 8

Number of congressional inquiries conducted into half a dozen terrorist attacks against Americans over the last 20 years, including 9/11: 7

There was never that much mystery about what happened in Benghazi, Libya, in September of 2012. Speaking broadly, a combination of bureaucratic ineptitude, poor judgement, galactically bad luck, and smart exploitation of all these factors by hostile Libyan militias on the ground led to the deaths of four Americans, including Chris Stephens, the ambassador to Libya. It was an avoidable tragedy that nevertheless was not avoided, and some good people died.

That is the “real” Benghazi. Then there was the aftermath, what MSNBC’s Chris Hayes once called “hashtag #Benghazi,” by which he meant the years of conspiracy-mongering, demagoguery, and arguments over semantics that Republicans hoped would derail first Barack Obama’s re-election and then Hillary Clinton’s presidential campaign. It didn’t work for Mitt Romney almost four years ago and it isn’t helping Donald Trump now, no matter how much he invokes the attack as an indictment of Clinton’s leadership at the State Department, where she was serving as Secretary of State at the time.

It is well-documented that Congress does not pass much legislation or confirm many executive and judicial nominees these days. (And forget about asking congressional Republicans for a budget increase for security for overseas embassies, because why would they want to fund that.) But when it comes to spending an ungodly number of resources on a feeble effort to make Hillary Clinton and the Democrats look bad, no amount of money or time is too much.

Besides attacking Clinton or the Obama administration, the endless Benghazi outrage provided – or tried to provide – the illusion to the Republicans’ perpetually outraged voter base that their elected leaders were doing something to fight the Kenyan Usurper in the White House. It made for a nice distraction from the existence of a governmental structure that prevented the GOP majority from being able to fulfill all its other unfulfillable promises, such as forcing the president to sign a repeal of Obamacare or defunding Planned Parenthood or ripping up the nuclear deal with Iran. Republicans raised endless amounts of money by invoking Benghazi, and will likely raise even more over the next few months as party incumbents kick off their general election campaigns and “thinkers” at conservative media organs like National Review try to keep their publications afloat.

It is the conservative movement’s constant fleecing of rubes, so well-documented by Rick Perlstein and others, that moves Hayes’s“hashtag #Benghazi” onto the long list of conservative grifts that the right has been adding to for 50 years. Over the decades, a vast swath of right-wing think tanks, publications, and candidates (to say nothing of Fox News) have kept themselves funded and happy by acting as high-minded snake-oil salesmen, telling people that for just a few dollars more, they can stop godless tenured lesbian teachers from indoctrinating schoolchildren with communism. Or learn about the miracle cinnamon-based cure for cancer that leftists in government don’t want them to know about. Or finally dig up the truth about Hillary Clinton’s cattle futures or the drug ring she and her husband ran out of Arkansas’s Mena Airport.

To this long string of cons, we can now add Benghazi. Republicans have spent almost four years ignoring actual crises in the belief that if they kept drilling down, they would find something, anything that proved criminal wrongdoing on the administration’s part in not preventing the attack or rescuing Ambassador Stephens and his compatriots. Yet all they have found was Clinton’s use of a private email server during her tenure at State, a revelation that has also, so far, given off way, way more smoke than fire. (The parallel to this discovery and the endless investigations of Bill Clinton in the 90s that began with promises of the criminal venality of Whitewater and ended with nothing more than an affair with a White House intern cannot go unnoticed.)

The flailing and anger on conservative Twitter and the right-wing blogosphere after the Benghazi report’s release on Tuesday pretty much told you all you needed to know about this latest chapter in the saga. Right-wing voters have been conned yet again. But no matter how often that happens, they keep doubling down, this year by nominating the ultimate con man in Donald Trump. I would say they deserve what they get, if what they get wasn’t so potentially destructive for the rest of us.