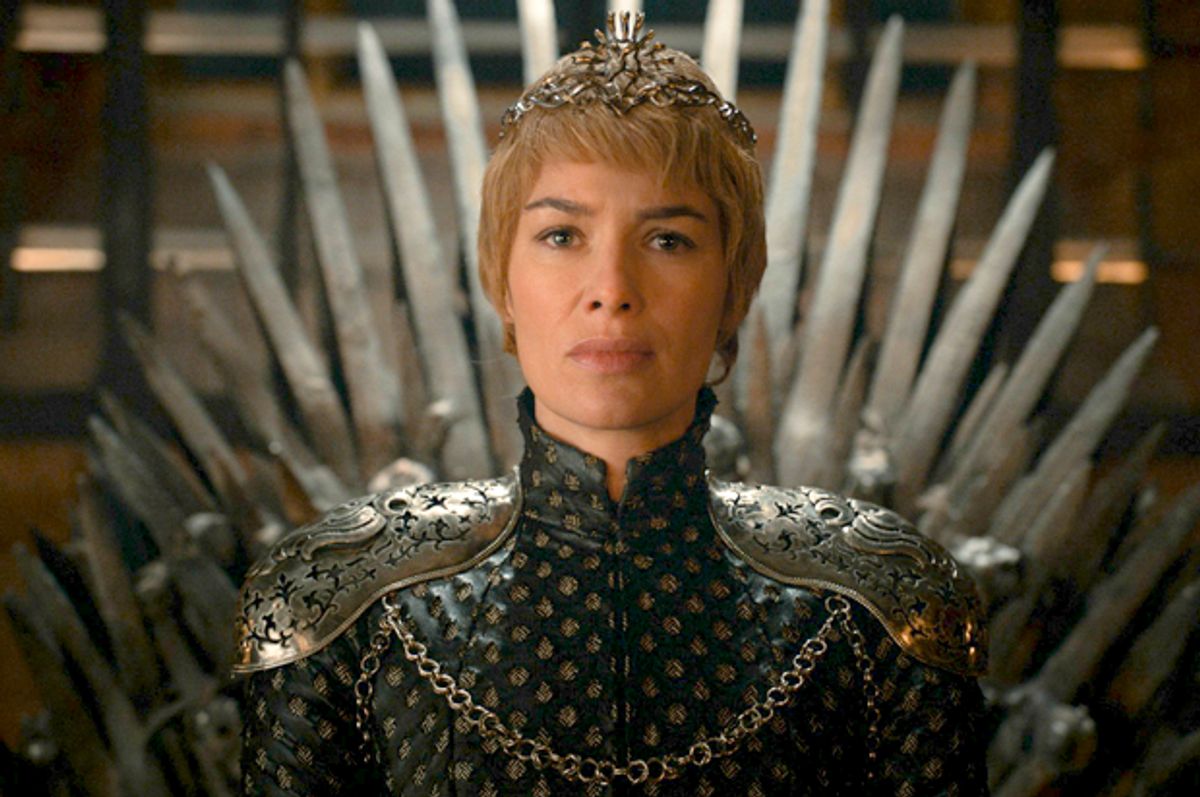 Warning: Spoilers ahead for the season 6 finale of "Game of Thrones."

Say what you will about the swords and the dragons—there was no element of Sunday night’s "Game of Thrones" season six finale more rapturous and provocative than Cersei Lannister’s dress. Until now, Cersei’s wardrobe has represented the essential paradox of her character: she wears only the most vibrant and luxurious fashions with her supple hair falling to her waist in flawless ringlets—and yet she is ruthless, conniving, and scrappy in a way that would ruffle anyone else’s golden hemlines.

Yet, in the first scene of season six, episode 10 of "Game of Thrones," Cersei casts aside all pretensions and finally dresses for the job she wants. The viewer watches as she, Margaery, Tommen, and the High Sparrow all prepare themselves for a trial at the Sept of Baelor. The High Sparrow dresses himself simply and quickly, Tommen readies himself with finery and a sense of seriousness fitting of his new commitment to a fusion of the church and state. Margaery faces away from the chambermaid dressing her, mirroring her conflicting feelings over sacrificing her brother for her own safety.

Cersei does none of this. Cersei luxuriates in readying herself. She stares out the window, taking in the Sept of Baelor one final time as its fate is already in the works. The camera pans, and we see she is already clothed. Her dress is dark, heavy, and high-necked. Beaded epaulets at each shoulder proclaim power. There is no passionate red robe here, but commandeering oblivion that is masculine and authoritative. She is Darth Vader styled by Alexander McQueen, and she is ready for war.

As the others arrive at the Sept to commence the trial, Cersei remains safely inside the Red Keep. While she waits for her plans to unfold, Cersei pours herself a glass of wine—she is still Cersei, after all. An anonymous assistant adds a final flourish to her dress: a chain linking at each shoulder. The chain is a symbol of the vengeance she will seek for her time in prison. Its openness tells us that she will never allow herself to be shackled again. Wearing an outfit that readies her for both battle and mourning indicates she foresees at least a glimpse of Tommen’s fate, even if she doesn't fully comprehend it yet. And yet the boldness of the outfit also says she won't be deterred—she is ready for her time.

"Game of Thrones" tells its tale as much with fabric as it does with complex political plots. The costumes of every character are not only a reflection of one’s origin and status in the world of Westeros, but also a direct representation of that character’s story arc. The life of Daenerys Targaryen, for example, could be entirely recounted via pleats and seams.

Daenerys is a character who has been through momentous change in the series’s six seasons. She began as a child, a nervous victim of her brother’s torment. The first time the viewer witnesses Daenerys, back in season one, she is naked. This vulnerability is hardly masked as her wardrobe consists of sheer, wispy tunics that leave little to the imagination. Slowly, she gains affection for her Dothraki husband, Khal Drogo, and acceptance of her role as Khaleesi. Thus her Valyrian sheaths are replaced by the customary Dothraki leather. In the final scene of season one, Daenerys emerges from the flames, as naked as she was in that very first episode. Yet the newborn dragons in her arms reveal she is no longer the same young girl, susceptible to the whims of men. She has reclaimed her identity and will move forward, guided by her own power.

In seasons two through four, Daenerys’s outfits, while differing in style and decoration, consist mainly of a knee-length tunic, pants, and boot, a reflection of her emotional flux between Valyrian elegance and Dothraki ruggedness. She is a woman in transition, a queen in search of her people who is willing to march alongside her followers.

Floor-length white gowns are Daenerys’s exclusive choice for season five. The simple and clean designs mirrors her naïveté and purity as she attempts to abolish slavery throughout the city of Meereen. She is frequently taken advantage of and politically targeted by the cunning Masters. Though she is a gentle-hearted ruler, she clearly has much to learn about “The Great Game,” as Tyrion, her future Hand, so aptly describes it.

In the most recent string of epsiodes, Daenerys appears to have found a balance. After a final brush with the Dothraki khals, she emerges from the flames once more as a much shrewder politician. In the season finale, she shares a tender moment with Tyrion during which she names him Hand of the Queen. The Grecian-style gown Daenerys wears in this scene, full of flowing fabric and pleating instead of her usual, more-structured style, communicates her comfort and ease around Tyrion. They share a bond of trust and respect, which is something both of them have rarely encountered in their tumultuous lives.

In the final scene of season six, Daenerys is shown at the helm of her fleet of ships, presumably headed directly for King’s Landing. Her gown, off the shoulder with a triangular neck and silver clasp, is identical in cut to the white gown she wore while holding court in season five. The only difference is the color: this gown is a deep-sea blue, almost black. Despite her struggles, she has maintained the ethical foundation of her political platform to which she clung so fiercely in season five. Yet she is now wise, risk-taking, and has formed genuine alliances that will help her reach her ultimate goal: the Iron Throne.

Though arguably no other character has experienced as many highs and lows as Daenerys has, throughout the cast, wardrobe changes reflect the arc of many of the characters. Take Jon Snow’s hair. This season, upon returning from the dead, Jon began wearing his hair back in a ponytail. Though I’m sure he had a desire to keep those luscious tresses out of his eyes during the Battle of the Bastards, the ponytail is also representative of his father (well ...) Ned Stark, who wore his hair in the same way. After Jon Snow fights to reclaim his home Winterfell, he physically steps into Ned Stark's role as the official Lord of Winterfell, head of the Stark family, and King in the North.

Though the world of "Game of Thrones" is lush and full of adornment, the narrative functionality of fashion is also another way in which the show subverts male claims to power. The most recent season relied on the characters of Sansa and Arya Stark, Cersei Lannister, Yara Greyjoy and Daenerys Targaryan to advance the story and set the wheels of Westeros in motion. Jon Snow was perhaps the only male character this season with any real narrative power.

For many women, fashion poses a constant contention between empowerment and restriction. High heels limit one’s movement while skirts liberate it. So are the women of "Game of Thrones" faced with constant entrapment and freedom. The clothes they wear while fighting battles and scheming for power do not make the character—Yara Greyjoy would still undoubtedly have the same steely personality if she traded outfits with quietly scheming Littlefinger—but the clothes do contribute to our understanding of the motives and inner life of a character, a necessary task for taking in 60 characters in 60 minutes.

Sometimes, fashion has even more direct implications for the plot of "Game of Thrones." The Red Woman’s age-defying necklace sparked inquiry and debate for days after the episode. Audiences were stunned when the physically flawless Melisandre removed her hexagonal choker and transformed into a wizened crone. Not all costumes on "Game of Thrones" are enchanted, but like her necklace, they do all function as both sleight of hand and revelation. They can conceal and trick, providing yet another layer to an already complex character—as in the case of Cersei’s sultry kimono robes—or they can signal a character’s very destiny, like Jon Snow’s ponytail.

The finale of season six sets up fashion to be more significant to the future of "Game of Thrones" than ever before. While Daenerys sets sail for King’s Landing, Cersei takes the Iron Throne. Her studded black dress with metal epaulets causes her to blend seamlessly with the seat she has coveted for as long as viewers have known her. Her short hair creates a silhouette eerily similar to Joffrey's and Tommen's—her two sons and former kings who she has sacrificed and replaced. In "Game of Thrones," fashion and politics merge so completely that asking who will be ruling whom is the same as asking who will be wearing what.