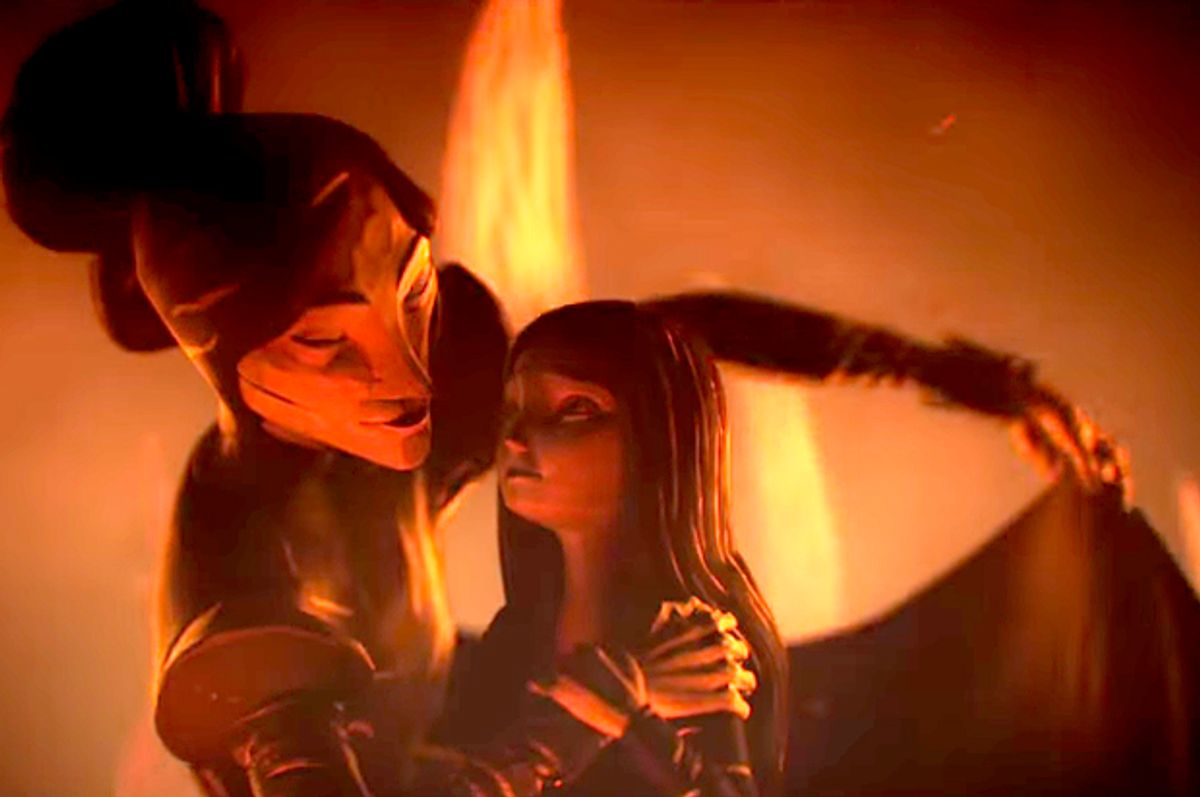 A still from "Fantastic Beasts and Where to Find Them - Ilvermorny School of Witchcraft and Wizardry” (pottermore.com)
--

A few months ago, when J.K. Rowling released “A History of Magic in North America” on the Pottermore website, Native critics, scholars, readers and writers voiced their concerns with her appropriation of living traditions cherished by Native peoples.

Rowling’s silence presaged the cringe-worthy content of “Ilvermorny School of Witchcraft and Wizardry,” the latest installment in the unfurling backstory of the North American wizarding school. It’s the 17th-century story of Isolt Sayre, a magical Irish lass who sails with the Puritans on the Mayflower to land at Plymouth Rock, Massachusetts. Running away to the mountains, she finds a magical sidekick—a Pukwudgie she promptly names William—only to stumble across three young white colonial settlers in various states of distress, and ends up co-founding a magic school with them. “Pukwudgie” becomes one of the four houses at Ilvermorny, each of which is named after a magic totem animal. You can now go onto the Pottermore site and take a quiz that will sort you into one of the houses.

So…no magical human Natives in this story, like maybe a couple from the tribe known as the Massachusetts, as in the state of? How about the Wampanoag, who populated the land nearest the Plymouth colony? Rowling never mentions Natives living in the area, let alone the fact that things didn’t go so well for them once the colonists stopped being grateful. Instead, she gives us a Pukwudgie, a anthropomorphic creature from Wampanoag lore, but which in her hands becomes a resentful, English-speaking, voluntary bondservant who refuses to tell Isolt his given name and so she names him “William” after her father. Together, they forge a “unique” friendship that sounds suspiciously like the Lone Ranger & Tonto with a dash of her man Friday, precisely because it echoes stereotypes regarding good/guide Indians-as-interlocutors and specifically the history of Tisquantum, or Squanto, an English-speaking Native American of the Pawtuxet tribe, who escaped slavery and helped the first Pilgrims survive—much in the same way that William the Pukwudgie helps Isolt — by showing them how to hunt, fish, gather wild plants, and cultivate domesticated seeds.

As proud Ravenclaw (and author of the forthcoming fantasy "Wintersong") Sarah Jae-Jones summed up: “The whole William the Pukwudgie thing left a really bad taste in my mouth because it was playing the Squanto role for her with nary an actual Native human in sight.”

On Twitter and on her blog, “Native Indians in Children’s Literature,” Nambe Pueblo scholar Debbie Reese has made it clear that Rowling’s immense reach and influence on young minds means she has a responsibility to get the representation right.  Yet “the new story makes it clear that she [Rowling] is, in fact, in too deep to revise this story,” Reese wrote in an email to me, referencing back to the issues in the “History of Magic in North America.” Reese added: “I dread what Native and non-Native children will contend with from her. The movie — and, no doubt, merchandise for the theme park — will be yet another assault on Native peoples.”

The Young Adult writing community has been voicing its concerns. “Reading the short piece on Ilvermorny,” young adult science fiction writer Beth Revis noted in an email to me, “all I could think is that it was written with a colonial lens. This was the story of an outsider in America ‘fixing’ what was already there. Rather than integrating Native Americans into her world, they are reduced to background set pieces.”

Revis was sufficiently troubled by Rowling’s colonialist perspective to start a thread on Reddit. The ongoing thread is worth reading in its entirety, as it neatly — and civilly!— unpacks the most problematic issues in the Ilvermorny story. The three main issues are these:

Consider, for example, that Ilvermorny stands atop Mount Greylock. That mountain is in the Berkshires, which is just about as far away from Plymouth Rock as you can get and still remain in present-day Massachusetts. About 180 miles separate them, but the story makes it sound like they’re close enough for colonists to stagger to and fro without provisions or a lamp. (Also, Rowling pretty much ignored winter in New England, and everything that cold weather entails in the 17th century  — which is a lot.) Regarding wand-making in the New World, she explains: “James learned to use a variety of other cores including Wampus hair, Snallygaster heartstring and Jackalope antlers.” (More about American wand-making here.) The Wampus cat and the Snallygaster appear in various corners of American folklore, but she didn’t seem to realize that the Jackalope is a different kind of fabled beast. Part legend, it is now mostly hoax, a joke played on city people who barge in and start throwing their money and their weight around, professing to know how to do things better than the folks who actually live here. Ayup.

The “Harry Potter” series was convincing because it grew out of a deep familiarity with British life and sensibilities, including Enid Blyton, Arthur Ransome, and the subgenre of boarding school literature. But the first book in the seven-volume series appeared in 1997, making it nearly two decades old. Times have changed. What the series was conceived, there was no 9/11, ISIS, Pulse shooting, or Syrian refugee crisis, not to mention #WeNeedDiverseBooks, #OscarsSoWhite and #BlackLivesMatter. Though Rowling retrospectively affirmed that Dumbledore was gay and supports a race-bent Hermione, she is now failing to grow as an author by openly showing the kind of creative courage that made Harry a hero to millions.

“Writers talk a lot about authorial intrusion,” Revis observes, speaking of “the idea that an author's idea is so important she'll force it into the story whether it fits or not. In some ways, I think that's the issue that's happening here.” For the world of the original Harry Potter “was distinctly British," Revis noted, yet "rather than evolving the idea to a more global scale, it has been shoehorned into the same mold of Britishness.”

Unfortunately, Rowling picked a repressive mold from the Victoria era. To uncritically promulgate this 19th-century view of the world is hardly benign, and saying it’s “just a kid’s story” is to willfully refuse to acknowledge the violence wrought by colonialism on the lands and peoples it plundered, not to mention the legacy of the economic and social disparities left in its wake. Even the recent big-budget film versions of Kipling's “Jungle Book” and Burroughs' “Tarzan” were at least somewhat aware they were rehashing the White Man’s Burden and White Savior tropes, but infantilized amoral storytelling has a social cost. Among other things, Brexit has revealed that “Britishness” remains ineluctably white in the popular imagination. What happens to everyone else when you continuously shore up a racialized socio-political hierarchy? You get a wave of vicious hate crimes directed at immigrants and non-white citizens of Great Britain, who are seen as being less than human. Like, say, a Pukwudgie.

What we write, or fail to write, is culpable in this. Stories have the potential to create new possibilities, shaping dreams for a more balanced and harmonious future. What we’ve seen so far of the geographically-expanded Pottermore world suggests that Rowling has done the opposite: Whether consciously or not, she’s legitimized whiteness as a cultural institution and a power structure, replicating the patterns of historical colonialism by establishing wizarding schools in far-away places — North America, Brazil, Japan, somewhere in “Africa,” — as posts on the outskirts of the Empire. And so the latest stories, instead of being exciting and new, seem nostalgic for a time when the sun never set on the British Empire, even as Great Britain now threatens to break apart.