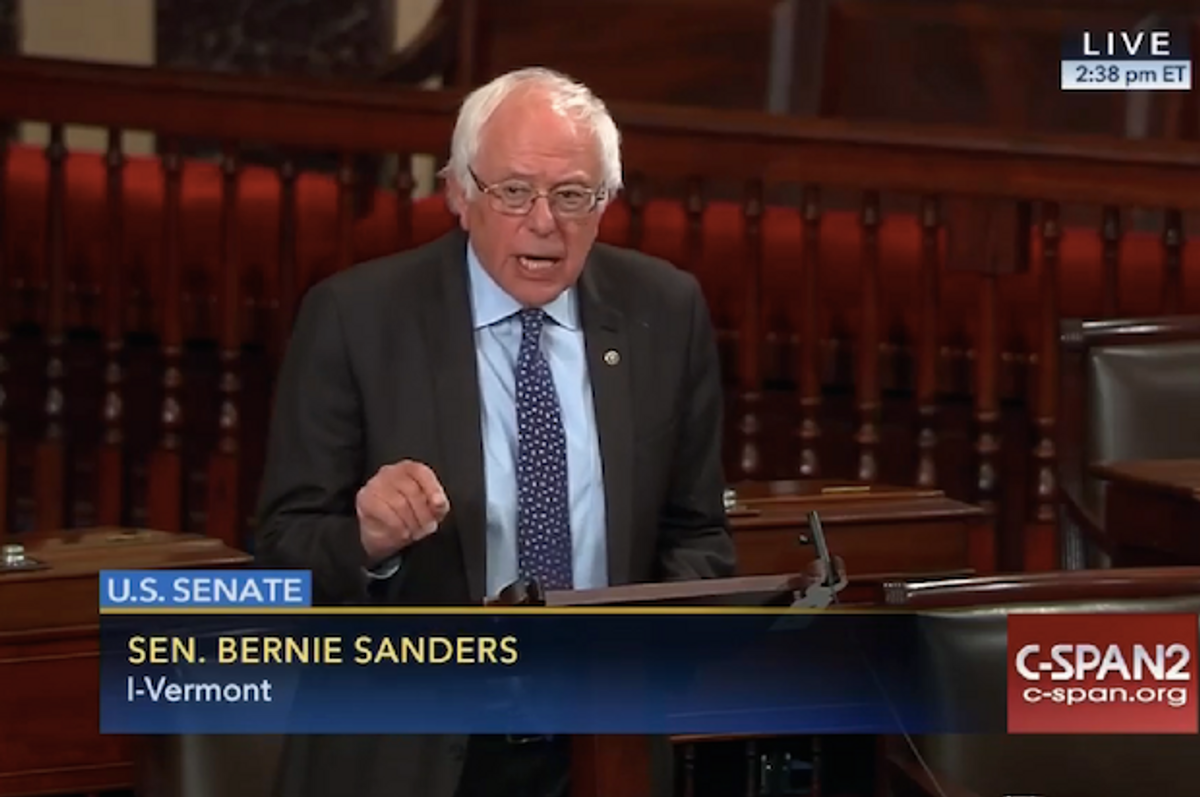 Bernie Sanders speaking on the Senate floor against the PROMESA bill on Wednesday, June 29, 2016 (C-SPAN)
--

President Obama signed a bipartisan bill on Thursday that imposes what critics say is a "colonial" control board on Puerto Rico.

The Puerto Rico Oversight, Management and Economic Stability Act, or PROMESA, was largely supported by both the Republican and Democratic parties, and will allow the U.S. federal government to appoint an unelected seven-member board that controls the finances of Puerto Rico, a U.S. territory.

Sen. Bob Menéndez led the opposition to the bill, slamming it as a form of "blatant colonialism." He held a four-hour filibuster on Tuesday, June 28, stressing that a vote for PROMESA “is a vote to disenfranchise 3.5 million Americans.”

The vast majority of Puerto Ricans opposed the legislation, but it passed both the U.S. House and Senate by substantial margins.

He called it a "disaster for the people of Puerto Rico," adding, "This legislation takes away their democratic rights and self-governance and will impose harsh austerity measures, which will make the poorest people in Puerto Rico even poorer."

PROMESA makes the U.S. a "colonial master," Sanders continued, and "strips away the most important powers of the democratically elected officials of Puerto Rico."

The self-declared democratic socialist stressed that Wall Street vulture funds are profiting off of odious debt that is "unsustainable and unpayable," exploiting Puerto Rico's "human suffering and economic turmoil."

"I rise in very strong opposition to the Puerto Rico Oversight, Management, and Economic Stability Act, the so-called PROMESA Act. This is a terrible piece of legislation, setting horrific precedent, and it must not be passed.

The United States of America should not treat Puerto Rico as a colony. We cannot and must not take away the democratic rights of the 3.5 million Americans of Puerto Rico and give virtually all power on that island to a seven-member board that will be dominated, as it happens, by four Republicans.

This legislation strips away the most important powers of the democratically elected officials of Puerto Rico, the Governor, the Legislature, and the municipal governments as well. We must not allow that to happen.

This is not what the United States of America is supposed to be about, and this is not how we should treat a territory in the year 2016.

The bottom line is that the United States must not become a colonial master, which is precisely what this legislation allows.

Any decisions that are made regarding the future of Puerto Rico must be made by the people of that island and their elected officials.

This legislation, I should add, is not just about taking away the democratic rights of the people of Puerto Rico. It is about punishing them economically.

Over the last 5 years alone, more than 150 public schools have been shut down and the childhood poverty rate in Puerto Rico is now 58 percent.

There is a mass migration out of Puerto Rico to the mainland of professionals because there is simply no work on the island.

In the midst of this human suffering and economic turmoil, it is morally repugnant that billionaire hedge fund managers on Wall Street are demanding that Puerto Rico fire teachers, close schools, cut pensions, and lower the minimum wage so that they can reap huge profits off the suffering and misery of the American citizens on that island.

We have to understand that Puerto Rico's $70 billion in debt is unsustainable and unpayable. That is just a fact. You cannot get blood out of a stone.

Let me repeat that. Vulture funds are getting interest rates of up to 34 percent on tax-exempt bonds they purchased for as little as 29 cents on the dollar.

Let us be clear. This issue is a significant part of what the entire debate regarding Puerto Rico is about. Billionaire hedge fund managers who purchased Puerto Rican bonds for pennies on the dollar now want a 100 percent return on their investment, while schools are being shut down in Puerto Rico, while pensions are being threatened with cuts, while children on the island go hungry.

That is morally unacceptable. That should not be allowed by the Congress.

It is bad enough for Republicans in the House to write legislation that takes away the democratic rights of U.S. citizens living in Puerto Rico, but adding insult to injury, this legislation does something even more insulting.

At a time when health, education, and nutrition programs will likely be cut, this legislation, if you can believe it, requires the taxpayers of Puerto Rico to pay for the financial control board at the unbelievable sum of $370 million in order to fund the control board's bureaucracy.

So think about it for a second. The control board will likely cut programs for the elderly, the children, the sick, and the poor, on an island where 58 percent of the children are already living in poverty because Puerto Rico does not have enough money to take care of its most vulnerable people.

In the midst of all that, $370 million is going to be sucked away from Puerto Rico in order to pay for the administration of the financial control board. This, to me, is literally beyond belief.

Puerto Rico must be given the time it needs to grow its economy, to create jobs, to reduce its poverty rate, and to expand its tax base so that it can pay back its debt in a way that is fair and just.

In my view, we need austerity — not for the people of Puerto Rico but for the billionaire Wall Street hedge fund managers who have exacerbated the financial crisis on the island.

We must tell them loudly and clearly that they cannot get everything they want while workers in Puerto Rico are fired, while schools are shut down, while health care is underfunded, and while children on that island live in poverty.

I am very disappointed that this extremely important piece of legislation is being pushed through Congress without allowing any amendments here in the Senate. That is not the way we should be doing business. If allowed, I will offer an amendment in the form of legislation that I have introduced — legislation that would allow Puerto Rico's debt to be structured through the creation of a reconstruction finance corporation.

Let's never forget that in 2008, when Wall Street's greed, recklessness, and illegal behavior nearly destroyed our economy, the Federal Reserve provided $16 trillion in virtually zero — zero — interest loans to every major financial institution in this country, as well as central banks and corporations throughout the world.

If the Federal Reserve and the Treasury Department could move quickly to stabilize our economy and global markets in 2008, we can surely help the 3.5 million American citizens in Puerto Rico who are hurting today.

The Fed can and should provide low-interest loans to Puerto Rico and facilitate an orderly restructuring of Puerto Rico's debt.

This legislation is both a political and economic disaster for the people of Puerto Rico.

This legislation takes away their democratic rights and self-governance and will impose harsh austerity measures, which will make the poorest people in Puerto Rico even poorer.

This is legislation that should not be passed by the Congress."