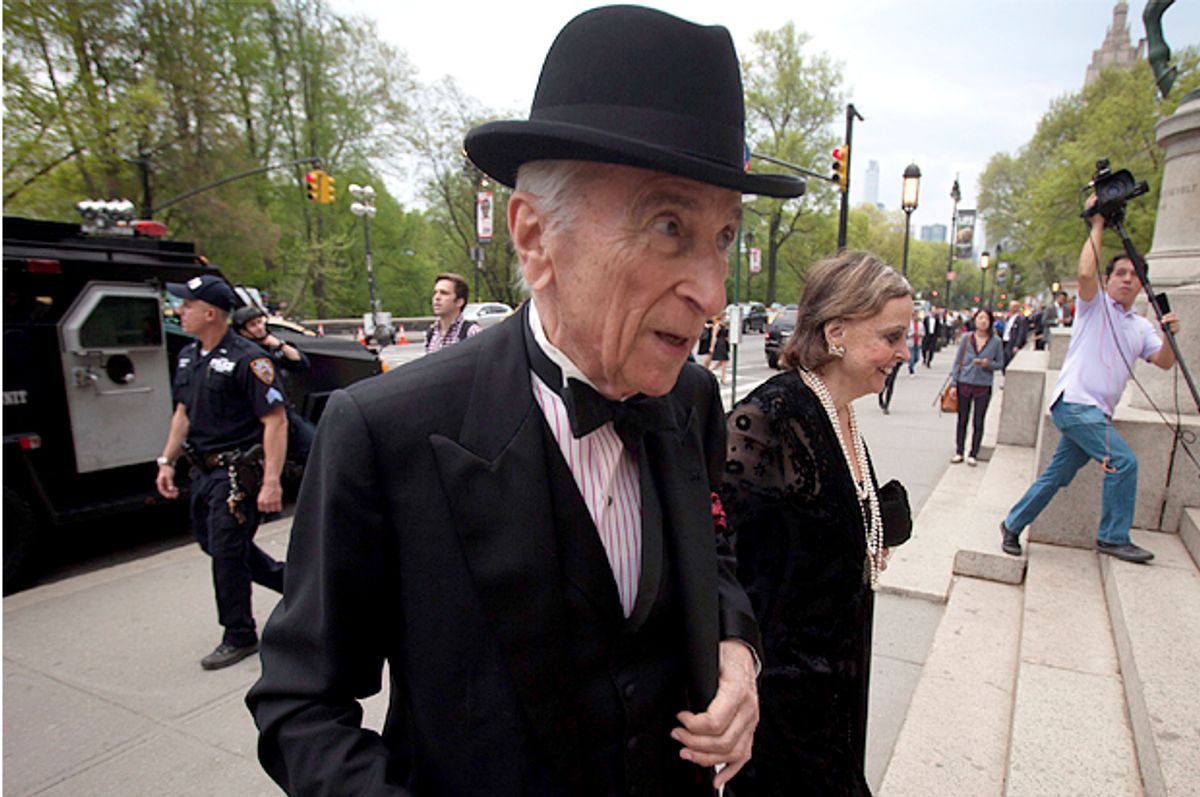 It’s been a bad few months for Gay Talese, a widely respected, even worshipped, pioneer of the New Journalism who was accused of sexism in the spring after he stumbled when asked about female journalists who’d inspired him. Now the writer is in hot water for what seems to be sloppy reporting in an upcoming book, “The Voyeur’s Motel,” that’s also been bought by DreamWorks for a film adaptation.

The book – excerpted in an April New Yorker – chronicles the owner of a Denver motel who cut into its ceilings to allow him to observe his guests having sex. He did, this, allegedly, for decades, fancying himself a kind of penny-ante Dr. Alfred Kinsey, recording changes over time, as American sexual behavior and the people engaging in it evolved.

Talese, 84, who has been in touch with motel owner Gerald Foos since receiving a letter from him in 1980, drew criticism when the New Yorker excerpt came out: What kind of person, journalist or otherwise, accompanies a man spying on people in bed and doesn’t report him? To make matters worse, Foos apparently saw a murder take place in his motel and only told police the following day, and did not recount everything he knew. Talese could have told the police, years later, but chose not to, he said, because it would not bring the slain woman back.

But with The Washington Post’s revelation that Foos did not own or operate the motel from 1980 to 1988, the entire tale is being called into question. When the Post’s Paul Farhi pointed out the discrepancy, Talese at first disavowed the book, saying he could not believe anything Foos said, and could not promote something based on another man’s lies. But on Friday he reversed himself, saying in a statement through his publisher, Grove/Atlantic, that he stands behind it.

“Gerald Foos, as no one calls into question, was an epic voyeur, and, as I say very clearly in the text, he could also at times be an unreliable teller of his own peculiar story. When I spoke to The Washington Post reporter, I am sure I was surprised and upset about this business of the later ownership of the motel, in the eighties. That occurred after the bulk of the events covered in my book, but I was upset and probably said some things I didn’t, and don’t, mean. Let me be clear: I am not disavowing the book and neither is my publisher. If, down the line, there are details to correct in later editions, we’ll do that.”

The fate of the film, to be directed by Sam Mendes and with involvement from Steven Spielberg, is not entirely clear.

Discussion around Talese’s stumbling takes three directions. The first is schadenfreude that an old sexist has gotten his comeuppance. The second is the lingering respect for someone who both broadened the field and created indelible pieces like “Frank Sinatra Has a Cold,” and sympathy for a man in his 80s. The third says, New Journalism opens itself up to this kind of risk.

So there’s no real consensus on what Talese’s failings mean here; it’s a complicated picture. “When you're writing a story like this, to some extent you have to lean on your subject, and hope that he's telling the truth,” says Marc Weingarten, the author of “The Gang that Wouldn’t Write Straight,” about the New Journalists, and the recent “Thirsty,” on William Mulholland. “I admire Talese so much as an assiduous and dogged fact-checker, but if those property records were there for him to peruse, he should have done his due diligence. I hate to see this legend of non-fiction getting himself into such an ethical mess in the twilight of his career.”

(At press time, the New Yorker excerpt remains up with no added notes, and editor David Remnick tells the Washington Post on Friday that "[t]his is not an account of, say, national security. This was, from the start, a profile of a very peculiar character, to say the least, and Gay Talese flagged those qualities honestly and repeatedly.”)

This is hardly the first time a journalist using literary techniques has been accused of ethical lapses. At lease some of the quotes Truman Capote used in his non-fiction novel “In Cold Blood” were made up; Gail Sheehy was criticized for using composite characters in a story about prostitutes and pimps.

Talese does not seem to have intentionally made anything up, but rather does seem to have been sloppy. He may have also not gone looking for details because he liked the story the way he had it. His likely error – trusting his source too much – may’ve come from the way he tends to approach his subjects. When asked about the kind of people he likes to write about, Talese told Robert S. Boynton, “People with whom I have a close emotional affiliation. We spent so much time together that we have a kind of affair. I get so close to them that I can write about them as I would write about my kin or my spouse, or a long-lost lover.” In the same interview, printed in Boynton’s “The New New Journalism,” Talese also says, “There is no such thing as absolute truth. Reporters can find anything they want to find.”

Ethically, the case is disturbing, says Evelyn McDonnell, who heads the journalism program at Loyola Marymount University. McDonnell admires Talese's vivid storytelling. “The goal of the writer is to not just bring those events to vivid life, but to ascertain their veracity,” she says. “Talese seems to have failed in this essential task of reporting and verification. At best, subjects have faulty memories and observations; at worst, they lie. Talese knew he had an unreliable narrator and he should have been more vigilant in documenting his account. This story is particularly disturbing as it involves the murder of a woman. The fact that Talese did not report what he knew to the police connects troublingly to recent charges of sexism against the writer. Was a woman's life less important to Talese than his access to a ‘good story’? As journalists, we must always be submissive to the facts and to the high ethical standards expected of watchdogs. We are truth-seekers first, yarn-spinners second.”

Talese still has a reservoir of good will that comes from a great deal of good writing and for opening up the field to new possibilities. For some journalists, he was a liberator. For Roy Peter Clark, who has written several books on journalism technique and teaches at the prestigious Poynter Institute, Talese provided a bridge from literature into journalism: His emphasis on character and sense of place and story structure were meticulous. “And Talese was always fascinated by the ways the culture was becoming more sexualized,” he tells Salon.

Clark says the Talese case brings us back to issues brought up by traditionalists in the early days of New Journalism in the 1960s. “There were questions, early on, as to whether the strategies of fiction — setting scenes, using dialogue, being able to describe what’s in the mind of a character — could lure a writer into the inventions of fiction. I think the answer is yes.”