GOP convention madness: Is Cleveland ready for its close-up?

Security, protests and a city in recovery: The real story is what's happening outside the convention center 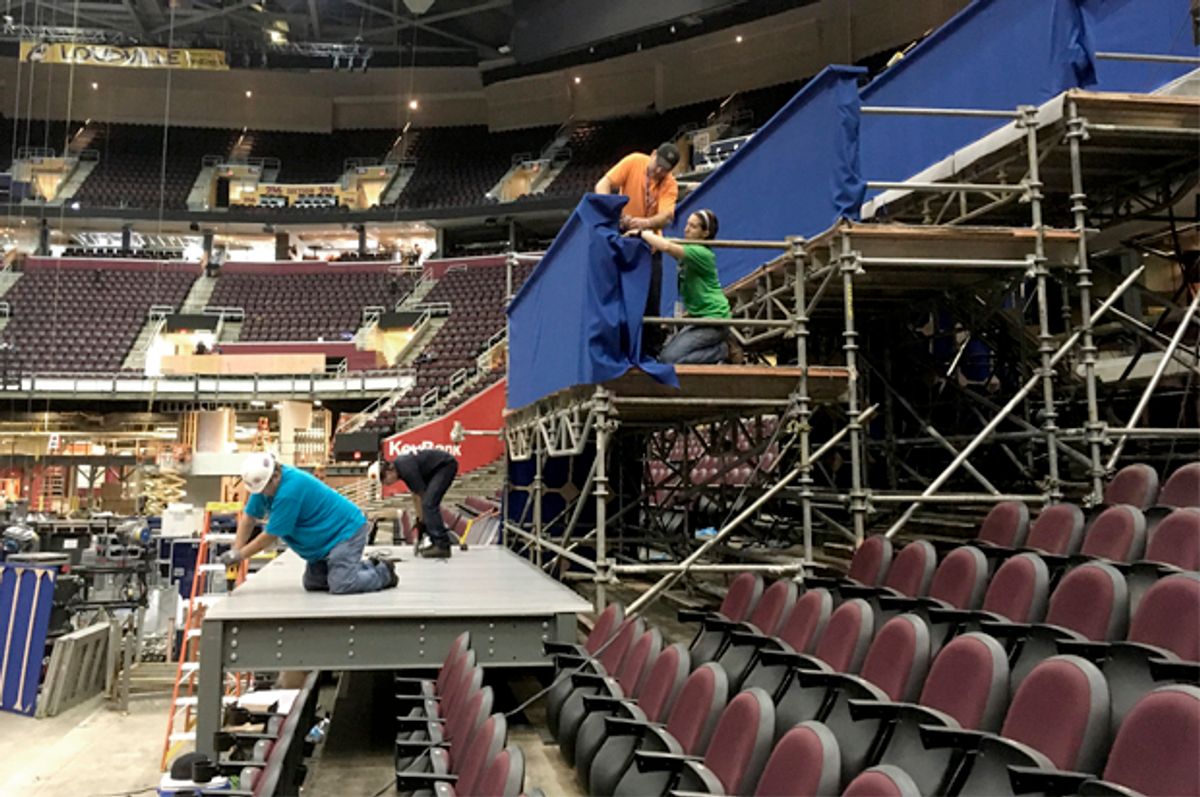 With just two weeks to go before the Republican National Convention, the city of Cleveland has much to be proud of downtown. Yet, at the same time, there are neighborhoods, outside the RNC limelight, that are still very much in the throes of a foreclosure crisis the nation is largely ignoring.

Decades of deindustrialization, urban disinvestment and race-based predatory mortgage lending took its toll. From a population of 900,000 in 1950, the city now has about 385,000 residents. Cleveland’s recovery remains very much a spirited work in progress.

“There’s no doubt about the transformation of our downtown thanks to the empty nesters and millennials who have moved in because they don’t want to have to own a car,” said Jim Rokakis, vice president of the Western Reserve Land Conservancy and director of the Thriving Communities Institute. “We’ve just had the grand opening of the $50 million renovation of the Public Square in the heart of downtown."

“But when it comes to the foreclosure crisis we were the most devastated city in the country with the exception of Detroit,” Rokakis told Salon. “We are still  dealing with vacant and derelict homes that need to be torn  down. And then there is the catastrophic loss in home values for the senior citizens still here. These people have seen as much as an 80 percent loss in the value of their homes. All totaled, in places like Cleveland, across the country, you're talking about a trillion dollar loss in the household wealth of African-American and Latino households.”

Rokakis was the former county treasurer for Cuyahoga County and when he was just 22, he was the youngest person to be elected to the Cleveland City Council. Rokakis and his colleagues have raised a half-billion dollars to take down thousands of derelict homes that actually continue to depress the values of the occupied homes that remain. We needed to take down 20,000 and we have 6,000 to go. It will take the next three to four years to remove the residential blight.”

At the same time, Cleveland is just at the very beginning of a multi-year process to rehabilitate  its police force. The CPD is under a federal consent decree and has a court-appointed monitor to help reform the local department that the U.S. Department of Justice  says for years frequently resorted to excessive force on the civilians it was supposed to protect and serve.

The Cleveland Police Department  found itself in a global spotlight, back in November of 2014, when police shot and killed Tamir Rice, a 12-year-old who was playing in a park with a toy pellet gun. A widely distributed surveillance video of the incident, and the aftermath, shows an officer shooting Rice within seconds of arriving, as well as police forcing Rice’s 14-year-old sister to the ground, handcuffing her, and placing her in a police car,  just feet from where her brother lay bleeding.

The video also supported the alarming contention, of the Rice family and their lawyers, that police waited several minutes to start administering first aid to the mortally wounded 12-year-old. The case generated a national uproar after former Cuyahoga County prosecutor Timothy McGinty announced that no criminal charges would be brought against the officers involved.

Voters bounced McGinty back in March on Super Tuesday. In April, Cleveland agreed to pay the family $6 million to settle the wrongful  death civil case that was brought after the tragedy helped galvanize the national push for increased police accountability.

Complaints over excessive force by the CPD are longstanding. As far back as 2002 the local department was on DOJ’s radar when the feds made 33 recommendations, which the city says were fully implemented. Yet, a decade  later, in December of 2012, Mayor Frank Jackson went so far as to ask DOJ intervention to investigate his own police department. That unusual appeal for federal help came  after police shot and killed an unarmed African-American man and woman after a 20-minute 100-mile-per-hour chase that involved 60 police cars and over 100 officers.

Police fired more than 130 times, striking Timothy Russell, 43, and  Malissa Williams, 30, more than 20 times each. Federal investigators determined that the responding officers thought they were returning fire from Russell and Williams, when in reality they were dodging bullets being fired from other officers.

A subsequent DOJ review determined that police had mistakenly initiated the chase after they mistook a car backfiring as gunshots being fired from Russell’s car as he drove by a courthouse. Two years after Mayor Jackson asked for the DOJ, the feds issued a report confirming the CPD had a major problem with resorting to excessive physical force, often on people who were mentally ill or in the midst of a serious crisis.

It took until October of last year for the appointment of Matthew Barge as the federal monitor for the CPD. It wasn’t until early this year that the court signed off on the monitor’s action plan. In his first semiannual report, issued last month, Barge conceded that “because the RNC is increasingly imposing substantial operational demands on CPD and the city,” the engagement of the broader community in reviewing the proposed final draft of the CPD’s new use of force guidelines would be put off until later in July or August. Based in the current timeline that new policy, won’t hit the streets until Jan. 1, 2017.

According to the latest monitor’s report, Cleveland’s police department is dealing with a legacy of underinvestment in technology related to records management and its call dispatching system. Efforts at trying to upgrade some of these systems have been hit with setbacks.

Barge was  also sharply critical of  the agencies within the police deportment charged with reviewing civilian complaints and monitoring police on-the-job performance. “The conditions of the Office of Professional Standards, which investigates civilian complaints, is unacceptable and irresponsible by any measure. The state of the Office of Professional Standards is dire,” concludes the monitor’s report.

In the aftermath of the 2014 Tamir Rice shooting, Mayor Jackson offered a presentation that summed up the results of his efforts to reform the troubled police agency, from 2006, when he was first elected, up until the end of 2014. According to the slides from that speech, available online, Cleveland had made significant progress in reducing police-on-civilian violence in that six-year period. Between 2006 and 2014 the instances of the use of non-lethal tactics, like batons, pepper spray, taser or physical force, dropped from 885 down to 405, a 54 percent decline. Over the same period the instances of deadly force dropped by 48 percent, from 31 deaths in 2006 to 16 in 2014.

In the federal monitor’s June report Barge committed that he and his team “will be on the ground in Cleveland…to the extent that any events may require” them to “monitor any situations that might unfold that implicate the use of force, internal and citizen’s complaint investigations, bias-free policing, supervision, or other Consent Decree issues.”

Shopping for protest insurance in a post Paris and Orlando world

Calls to the mayor’s office for a statistical update on the use-of-force numbers, and to respond to several other RNC related questions, were not returned. Cleveland, like all the municipalities that host one of the major party conventions post 9/11, will get $50 million from Washington to cover costs related to providing security for the event, which is expected to attract tens of thousands of people related to the convention itself and an unknown number of protestors.

Since 9/11 the major party conventions, like the Super Bowl, are declared “national security events,” where the U.S. Secret Service takes the lead on coordinating security with other federal, state, county and local police agencies. In the aftermath of the 2004 RNC confab in New York City it cost that city $18 million to settle civil litigation over the detention of 1,800 people who where either protestors or just pedestrians caught up in large-scale group arrests.

That New York City multi-million dollar payout got the attention of municipal officials who have hosted the Republicans and Democrats since. Evidently, the series of outbreaks of violence during the 2016 primary season, both inside and outside Donald Trump’s rallies, has Cleveland officials concerned. Back in March, the local government signed off on paying a $1.5 million premium to secure $10 million in “protest insurance.” Just a few days ago they signed off on paying $9.5 million to get five times that in coverage from AON Risk Services Northeast. That’s a big jump from the $1.7 million Tampa paid in 2012 to cover themselves for hosting the RNC, where no significant protest materialized.

Last month the ACLU of Ohio won a major victory in federal court when Judge James S. Gwin ruled that the city of Cleveland’s plan to create a 3.3 square mile control zone, as an additional buffer  around the convention complex defined by the Secret Service, was  an unconstitutional infringement on demonstrators' right to free speech and assembly. The ACLU’s clients in the case represented a very diverse group and included Citizens for Trump, the Northeast Coalition for the Homeless and Organize Ohio, a pro-labor group.

“We got the size of the zone brought down to 48 percent of what it had been,” Christine Link, ACLU of Ohio’s executive director, told Salon. Link says had the city’s plan prevailed it would have been double the perimeters imposed in 2012 in Tampa and Charlotte. “The city wanted to exclude a long list of things like sleeping bags, soapboxes and coolers” in this much wider zone, said Link.

Link said the ACLU was also worried about the impact of the city’s initial plan on the several thousand homeless people who use shelters around the city. “Back in the 1990s when the city was promoting  downtown shopping days the cops would drive the homeless several miles out of town to the salt mines and leave them out there.”

Ironically, the timing of the Cavaliers'  NBA title win, and the massive public celebration that drew more than 1.3 million revelers to downtown last month, was raised by Judge Gwin the day after the victory parade when the city was before him making their case for the wider security zone. Gwin openly questioned the city’s lawyers about whether the 3.3-mile security zone they wanted was justified when the number of people expected for the RNC was “maybe one-tenth or one-fifteenth of the people that were on the street yesterday?”

The city’s attorney stood his ground. “There are international enemies, there are domestic enemies that would love to target the Republican National Convention for their political statement," he said, adding later in the proceedings that letting protestors have access to a public address system in the control zone was a risk to public safety because large speaker systems could contain a bomb.

“I still have some real trepidation about this,” Councilman Michael Polensek told Salon. “If you talk to our local PBA they say there are not enough police or the right kind of equipment.” Calls to the local PBA were not returned.

“We have heard there could be over 30,000 protesters. Where are they going to go to the bathroom? Where will they sleep?” asked Polensek, who has served on the City Council since 1978. Polensek says he dislikes the fact that since 9/11 the conventions have become so militarized in terms of security. “What if I told you that when I was a kid and John Kennedy came here we all ran up to his open car to say hello? If you did that today you’d probably get shot.”