Why Christian Right leader James Dobson blocked me on Twitter

Dobson, of Focus on the Family, has a long history of ignoring anyone who might expose him as a fraud 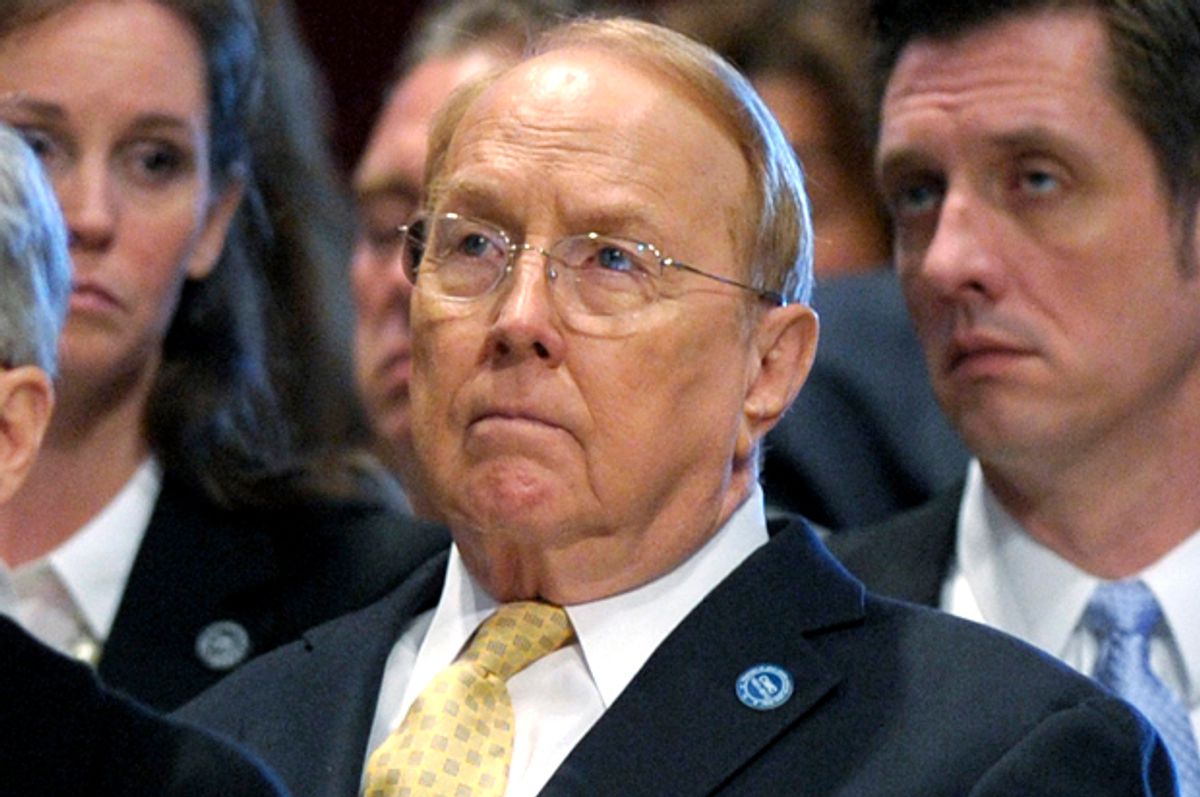 After I wrote an appeal to GOP delegates to oust Donald Trump, I discovered something odd: Dr. James Dobson had blocked me on Twitter. I only noticed because another account retweeted him and the quoted portion showed as “unavailable.” Another click solved the mystery. Dobson was no fan of mine.

Aside from a stray reference to him in my piece, I don’t even remember the last time he entered my mind. I’ve never met Dobson, despite years of overlapping circles from my fundamentalist childhood. His word was essentially scripture at Spotswood Baptist Church, a powerful right-wing church in Virginia and my second home throughout the 1990s.

I realized Dobson’s blocking of me, a gay vegan political writer and campaign strategist who presents exactly zero threat of harm to anyone, wasn’t all that surprising. He has a long history of ignoring anyone who might expose him as a fraud. So, I figured I should validate his fear and tell the truth about him.

James Dobson is the founder of Focus on the Family, a powerful far-right Christian media organization. He’s authored nearly 30 books on family issues, specifically parenting and marriage. Time ranked him as one of the most influential Evangelicals in the country. He also founded the Family Research Council, designated by the Southern Poverty Law Center as a hate group. At the peak of his career, Dobson’s voice was reportedly heard by over 200 million people on a daily basis, including on state-run radio in China via translator.

Dobson was eventually forced out of Focus on the Family in the 2000s as it tried to shake off the hateful image he’d cultivated over the years. He represents a brand of politicized Christianity that dominated the public discourse until the mainstream recognized what a dangerous fraud it really was around the end of the Bush era. Dobson’s credentials as a psychologist gave his work a veneer of authority, despite the fact he was an unapologetic charlatan.

A cursory glance at the beliefs of Dr. James Dobson shows the depravity inherent in his ideology. To start, Dobson advocates physically abusing children by hitting them to break their wills and bend them to parental codes. He’s creepily fixated on how to best inflict pain on kids, in obvious defiance of the American Academy of Pediatrics.  Here’s a sampling of his disgusting child abuse advocacy, in which he explains what objects are best for striking children:

I recommend a neutral object of some type. To those who disagree on this point, I'd encourage them to do what seems right. It is not a critical issue to me. The reason I suggest a switch or paddle is because the hand should be seen as an object of love--to hold, hug, pat, and caress. However, if you're used to suddenly disciplining with the hand, your child may not know when she's about to be swatted and can develop a pattern of flinching when you make an unexpected move. This is not a problem if you take the time to use a neutral object.

Take a moment to remove your jaw from the floor before we move on to what information the good doctor’s website has about transgender children. Not only does one post attack trans children, his writer endorses reparative therapy and stokes fears of a “homosexual lobby.” This is some of the web text from the piece, which encourages parents to sign a petition targeting trans kids by reversing a California equal rights measure through referendum:

The transgender lie is the root of the problem. For the left, it’s an axiom of faith that children must be allowed to choose a gender identity based on how they perceive themselves, regardless of whether they are born boys or girls. Many liberals go even further, holding the nonsensical position that human beings are meant to be gender-fluid, not boxed into the “binaries” of male and female. Gender, they say, might even change from one day to the next [...] When California outlawed reparative therapy (treatment designed to help children overcome unwanted same-sex attraction) for children under 18, New Jersey quickly followed suit. Other states are considering similar legislation. If California’s law stands, it’s not just California students who will suffer from the loss of privacy and threat to their safety and well-being. Other states where the homosexual lobby is strong will soon get in line.

If you’re wondering what he believes should happen to adult trans people, Dobson publicly mused this year about murdering them in bathrooms. We could review all the horrific statements he’s made, but it would take days.

The point of this is not to engage in a media war with James Dobson, rather to highlight the way Evangelicalism and rural America has shown a vulnerability to being hijacked by extremist con men. It’s no mistake that Dobson is using his remaining influence to convince Evangelical Christians to vote for Donald Trump, something millions of genuine Evangelicals have no interest in doing for a host of obvious reasons.

While Jerry Falwell is dead, Pat Robertson lost his audience and James Dobson seems more desperate by the day, there are still relevant con men seeking to use Evangelicals for their own bigoted political purposes. The con isn’t over.

Donald Trump may present a more obviously distasteful style of con than we’re used to seeing, but his cozying up to the Christian con men who’ve strangled the Republican Party for decades is no mistake. And, despite the clear breaks all of these people have with reality, their combined appeal remains a threat to our country.

Our job is not only to bring our fearful neighbors into the light, but to show up to support the better forces in our society at every opportunity and address the inequality that informs these con men’s appeal.

Dr. James Dobson may have blocked me on Twitter, but he can’t do a thing about my agency. I’ll be out fighting to make the world a fairer and kinder place, because that’s the only way to stop the hatred that informs a cycle of civil rights violations, child abuse and economic disenfranchisement.

Don’t forget the power of your voice and vote. Use it wisely and often. Don’t become too comfortable to remember that millions of Americans need us standing together with them to help ensure their safety and well-being. It’s not necessary just once every four years in November, but every day of our lives.