"I’m in awe every day": Virginia Heffernan on technology, virtual reality, and what the Internet means 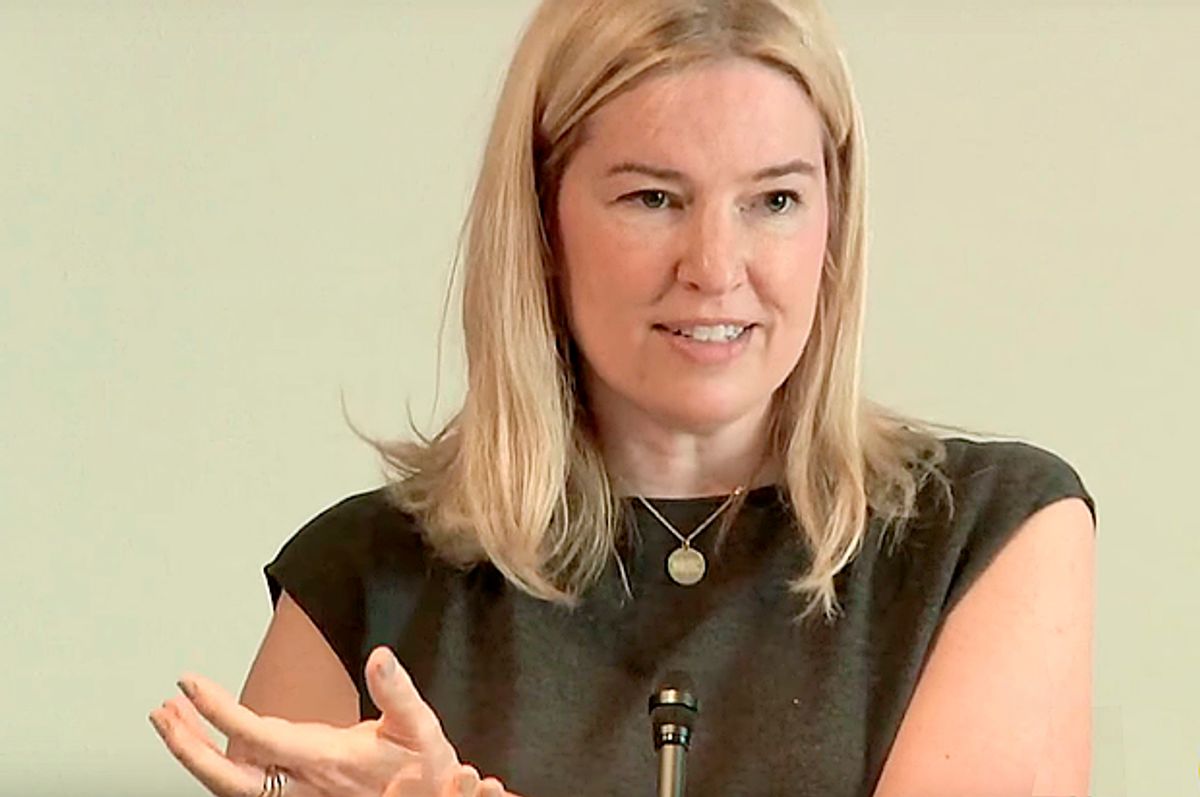 There’s a highbrow East Coast/West Coast throwdown underway. On one side, you have the techno-utopian designers of Silicon Valley, claiming to save the world one pizza delivery app at a time. And, on the other, you’ve got the New York literati, complaining about corporate surveillance and the death of the book.

It’s the literary critics vs. the programmers. Yale vs. Stanford. Gawker vs. Peter Thiel. Evgeny Morozov vs. the Internet.

Within this little feud, culture critic Virginia Heffernan has been a longtime outlier, peacemaker, and iconoclast. Heffernan has literary East Coast chops—she earned a PhD in English Literature from Harvard, and then worked as a TV and tech critic at the New York Times for close to a decade.

But Heffernan has long celebrated the aesthetic potential of the web’s whackier and more whimsical corners. She may well be the least cranky tech critic east of the Rockies. In her new book, “Magic and Loss,” she argues that “the Internet is a massive and collaborative work of realist art”—a kind of giant role-playing game that demands “a new aesthetics and associated morality,” and, perhaps above all, a sense of wonder.

Over the phone, Heffernan spoke with Salon about personal avatars, virtual reality, and why she wrote an entire book about the Internet that barely mentions surveillance.

The Internet is art? I thought it was a shopping mall.

I love to find out what metaphoric system people already bring to the Internet. You say it's a shopping mall. Someone who believes that YouTube comments or Facebook are the touchstone for what the internet is might say that it's a mob or a trash heap, or that it's this giant college where we all know each other.

I first went on the Internet as a game player. It was the’ 70s, and I was playing a D&D-inspired game on this ARPANET-era computer. I always feel I'm playing a roleplaying game when I go online.

So what’s a good way to talk about experiences of the Internet?

In the book I talk about the sort of spectacle many of us first got when we touched Google, of the "too-muchness" of the Internet. Early in my life I had this grandiose fantasy that maybe one day I would be able to read everything. As soon as I saw Google, I lost the will to read because I was so overmanned.

As soon as I adjusted to the sublimity of the Internet, I could understand that the moral act was no longer reading, but in some ways refraining from reading. We are in a period where we're all so intoxicated by reading that we risk highway fatalities in order to keep reading and writing on our phone.

Alternately, you could say that Silicon Valley has just gotten really good at engineering compulsive products.

It's a little bit like social space, or walking through a souk. Anytime you've had to learn how to survive in the city, there's an opportunity to see this as predatory.

But instead of us saying "well the system's all jinxed. There's no way to walk around in the market capitalist democratic country public square, without getting mugged,” we don't take into account that that's part of the pact. People are welcome not to enter the Internet at all, but to the extent that they enter it, they are at every turn creating an Internet citizen or an avatar who, yes, needs to look out for itself.

I definitely see people making really interesting decisions about how they're going to resist digitization. That is another way to participate in the Internet: to resist. It's not a place for terminally vulnerable, innocent people. But what I think I've been amazed at is how many billions of people have, to some extent, risen to the occasion and created durable avatars who are doing interesting things.

It's always hard to draw the line between online and offline life, though. What's real?

They are real characters, let's put it that way. The seductiveness of the realist masterpiece that I call the Internet makes some of us lose our orientation around the fact that this is fantasy.

Fantasy or not, when I log in to the account for my online bank, the number I see there has a direct impact on my life. How do you deal with blurred lines between online and offline persona?

We know the rubber hits the road when we're talking about dollars and cents and bank accounts. You can’t be like, “Well ‘Heffernan8’ on Citibank is like a fanciful invention of me!”

Sometimes I like to think that my avatar takes sniper fire for me while the real me gets to be safe. I feel like my offline life has gained. It's much richer and more interesting because of all the symbolic business happens without the flesh and blood me being present.

So why are critics so grumpy about the web?

I feel like it's anxiety about abstraction, because if kids are just sitting staring at something, it just has to be bad for them.

The amount of dollars spent trying to figure out exactly what the toxin is in television…and now screens? Is it something in the jumpcut? Is there something in the advertising? We can't quite find out why this is poisoning us, but we continue to believe it's poisoning us. That is definitely an article of faith at many of our newspapers and magazines.

Your book barely mentions pornography, surveillance, or corporate control. Why did you omit topics that seem so central to online experience?

I wanted to talk about the art of the Medicis, not about the tyranny. I was frustrated that most of the writing about the Internet was seemingly still fearful. I didn't want to touch neuroscience or that kind of heavy political view, because no one had talked about the art.

Are the artistic project and the profit motive incompatible in some ways?

Thing just aren’t produced if money isn’t being made.

Why did poetry suddenly become short when the New Yorker was the gatekeeper for all poetry? If you’re weighing it against a cartoon and columns of text, then suddenly you can’t write like Walt Whitman with long lines. Most great American art forms, including novels, do end up finding a way to make some money. I know some artists don’t like to have to push back on the market, but to a great extent I appreciate the art that finds dynamic tension in that relationship, and not just crushing tyranny.

That New Yorker poetry example is funny. Part of demonizing current technologies and forms is idealizing past ones.

If you think of yourself as anti-technology, you’re probably under the spell of another technology. Nostalgia in the heyday of mechanical reproduction [by printing press] used to fetishize the human hand and the quill, or the single sheet of paper.

Some new tools are actually starting to enter our bodies and minds in a more tangible way, though. Is that a categorical difference from older generations of technology?

When I was playing Dungeons & Dragons as a kid, there was such a terror that we were going to disappear into this world. Like an LSD thing. “From then on, he never was in touch with reality again.” That’s not my experience with even totally impassioned Internet players.

But there’s this fear of tipping over, isn’t there? We’re a society that values shared, public experience. Something like Oculus Rift cuts against that.

I really thought virtual reality was like a hallucinogen that I am interested in taking in very small doses. It’s highly pleasurable, and yet so concentrated and strange that I felt it really would be like doing LSD all the time.

You chose to publish Internet criticism as a book. Why did the format seem appropriate to the task?

When the Wall Street Journal was regularly reporting on Big Tobacco—it was before I came to the Times—I had been thinking, “Why write all this ephemera?” Because I still thought of journalism, as they used to say, as wrapping for fish the next day. You were writing on water. It’s going to be gone.

But then I saw what the Journal did with their reporting, and I was like, “Oh, I see. [They are] making an argument over time.” Whether someone connects the dots or not, some themes are going to color everything you write about. There’s a reason that ideologues are good at columns. Because they can always put it through their lens.

There was this Matt Groening comic of academic types on the wall of the faculty lounge [at Harvard], and one of them was something like “The Single Theory Professor.” His single theory was: “He who controls magnesium controls the earth.” And [as a New York Times media columnist] I pretty much was like, I don’t want to quite become a “He who controls magnesium controls the earth” person. But I was getting there until I was able to see the loss that pushed back on the magic.

Do you still feel that there’s a magnesium trap that you’re avoiding?

No, it’s wonderful because the Internet so incredibly diverse that there’s always something new to read. There are these moments where I’ll realize something is sort of ascendant, like Snapchat. I download the app and sort of gear up, like “My brain has to change to take this in.” There’s always this excited panic where I’m just like, “OK, this time I’m just not going to get it.”

That’s the moment that I usually try to double down and say, “It’s my burden to see what this thing is.” Even if it takes me a lot longer than it used to get some followers and get a hold of a new social network, that’s my job as a human.

As a human? Not as a critic?

Right. As a human. We get one chance on this earth, and it’s like, how did this fucking Internet happen? I’m in awe every day. I can’t believe that, sitting in my chair, I can explore all that. It feels like an incredible privilege.

To go back to the idea of finding metaphors for the Internet, what’s the metaphor for your role? How do you understand your critical avatar?

I just feel determined to take the Internet seriously as a cultural paradigm shift. Not like a niche of technology or a business proposition, but a giant new empire that is, frankly, much bigger than any empire we’ve seen before.

I think my role is to take it seriously and also really consider this masterpiece, and to be there right with it—to somehow stay with it.