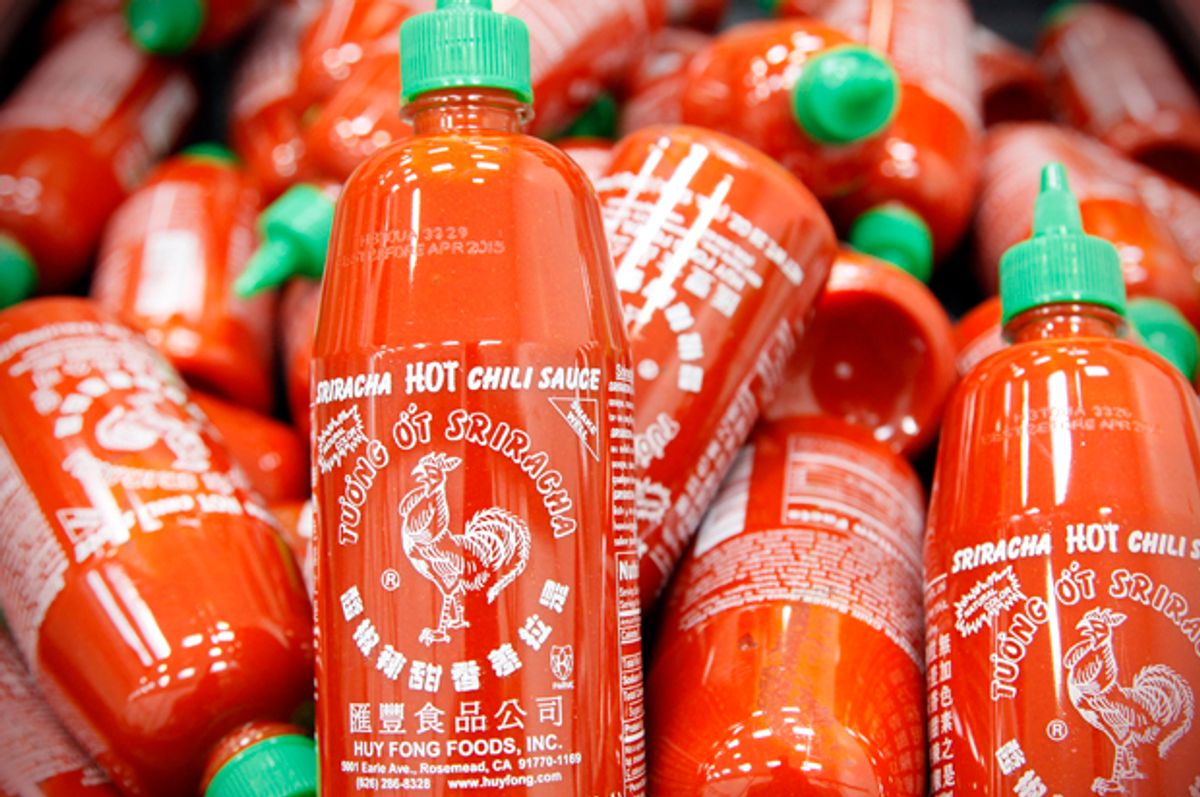 Earlier this month, my husband and I were stopped at a red light, on our way to get Thai food, when the McDonald’s advertisement on a bus in the next lane caught my eye. “Awesome sauce?” I blurted, reading the copy beside an image of a succulent burger. “There’s sriracha at McDonald’s?

The so-called awesome, by the way, is a tangy mixture of sriracha and Big Mac sauce. A few days ago, in the name of journalistic integrity, I twisted my husband’s mostly-pescatarian arm and, before we knew it, we were in a drive-thru for the first time in recent memory, ordering Signature Crafted Big Macs with Signature Sriracha Big Mac Sauce. According to Hakeem, who collected our $12 and passed us our burgers, about three out of 10 people were ordering the sriracha Big Mac.

“It tastes like pouring pain on my food,” said another.”

“I hate the potato roll! Who would eat this?”

The answer is no, not rocket, but kale, baby kale and spinach — according to a press release from the company, their “different approach to lettuce.” Other features of the Signature Crafted sandwich include white cheddar cheese, onions (I think they were meant to be crispy), and tomato, toppings that can be stacked on a “100 percent pure beef patty, Buttermilk Crispy Chicken or Artisan Grilled Chicken.” All of this, I suppose, adds up to “bold recipes with authentic ingredients” that “[allow] customers to customize each part of their sandwich.”

“Sriracha,” like “customize,” is a buzzy word in the food industry. In 2015, Hillary Dixler of Eater listed both in her article “11 Things Millennials Want, According to Giant Food Companies.” McDonald’s isn’t the first fast-food chain to co-opt jalapeño-garlic-sugar fire, but their adoption (and their verbiage … “Awesome sauce?”) feels a bit like when your parents first began using emojis: a little part of the cool died.

A coolness in which I never really took part. Yes, my husband and I keep a bottle of sriracha in our refrigerator (a preference, not a necessity); yes, I can tell you the non-GMO Ninja Squirrel Sriracha is sweeter than the Sky Valley competitor offered at Whole Foods; indeed, I can even recommend an artisanal, small-batch sriracha maker, The Kitchen Garden, out of Western Massachusetts (beware the caution-cone orange habanero variety). We use it frequently, in pasta and on pizza, with eggs and dumplings, to cut the cloy of macaroni and cheese. When it’s movie time, I melt butter and sriracha together until the mixture sizzles and coat popcorn until the kernels are ominously red. Like several of the aficionados with whom Griffin Hammond speaks in his 2013 documentary "Sriracha," I have packed a bottle for lunch, the poor man’s acid reflux delight of baby carrots and rice cakes—and packed that lunch in a canvas tote bag from the aforementioned small-batch sriracha maker, emblazoned with their take on the sauce’s American originator’s logo, Huy Fong Foods’ rooster.

I can’t help feeling like the subjects in Hammond’s documentary would score my degree of sriracha gustation low on the Scoville Scale. Hammond shows sriracha T-shirts and sriracha stilettos, sriracha sweaters and sriracha tattoos, sriracha cookbooks and sriracha pilgrimages (to the town of Si Racha in Thailand, where tigers jump through flaming hoops and the sriraja sauce is thought to have its roots) and sriracha festivals (like the Electronic Sriracha Festival that marries hot sauce and EDM, which can be nothing other than sonic equivalent of that Sriracha Signature Big Mac Sauce).

The ephemera and the fan-perpetuated hype made sriracha a cult hit for years. But what happens when the condiment of the cool kids gets foisted through the golden arches and blandly deemed “awesome sauce”? What does the fanaticism it inspires say about our cultural values? As one young woman Hammond interviews in the opening minutes of his documentary puts it, “It’s an obsession, really.”

That obsession, one discovers with not too much research, is borne out of the labors of David Tran, the owner of Hoy Fong Foods in Irwindale, California. An ethnic Chinese who immigrated from Vietnam, Tran began making his take on the spicy hot sauce for Vietnamese restaurants in Southern California. In Hammond’s documentary, Tran recounts the early ’80s, when he painstakingly filled bottles with a single spoon and delivered his product to clients in LA’s Chinatown in a blue pickup.

The American-dream success story of Tran cannot be underestimated in supplying sriracha with its mystique. Since their inception in 1987, Hoy Fong Foods’ (named for the boat by which Tran left Vietnam) sales have been in constant acceleration, growing by 20 percent a year—without an advertising campaign. Unlike McDonald’s, Hoy Fong didn’t declare its sauce “awesome.” And yet the green-capped bottle with writing in “English, Chinese, Vietnamese, French and Spanish” and the drawing of a rooster (Tran was born in the year of the rooster) seems to have entered the stratosphere of icon on its own. Annually, the company sells some 20 million bottles.

But is sriracha the twenty-first century’s Coca-Cola, a food that represents multiculturalism and intensity, a Wunderkind both mainstream and counterculture? Surprisingly, the condiment may soon be cohabitating with the soft drink—on banned food lists. The fast-casual chain Sweetgreen recently announced sriracha would be removed from its menus (along with, less surprisingly, bacon). The problem with the rooster sauce? Likely, sugar, Georgina Gustin writes in National Geographic. Gustin is skeptical about the validity of this concern: “Sure, the second ingredient in Huy Fong’s Sriracha is sugar, the third is salt, and it has some scary-sounding preservatives. But to eat the Food and Drug Administration’s recommended limit for sugar consumption of about 12 teaspoons a day, you’d have to down half a bottle of Sriracha—enough, really, to blow your head off.”

Half a bottle sounds like a lot (unless you’re downing two or maybe three bottles in a Sriracha Challenge, a phenomenon that attracts millions of viewers on YouTube and merits its own examination for the wasteful idiocy it captures and celebrates)—but, then again, maybe it doesn’t. How much sriracha does the average American use? In my two-person household, a bottle is lucky to last a month. Each teaspoon-sized serving of Huy Fong sriracha contains one gram of sugar, which doesn’t seem so bad until you stop and think: When was the last time you put a measly teaspoon of sriracha on top of anything?

I can’t help wondering if Sweetgreen’s ban doesn’t point to something essential and weird about our diets. No, a preference for heat or spice is not inherently American—but the fervency with which we devote ourselves to foods goes beyond preference or even taste. The foods we eat and prepare reveal our identities: where we come from, who we are, who we want to become. What does it mean that we have become “obsessed” with sriracha? That we want to be able to customize all parts of our sandwich?

Perhaps sriracha is just a recent addition to “have it your way” culture. Is that “customization”? I am guilty of wanting that—which I dislike about myself. I don’t like that I can’t eat a piece of pizza without wanting it to have more flavor; I don’t like that I’m not satisfied with a bowl of ramen unless it's burning my mouth. I’m not anti-seasoning, but I am pro-enjoying a variety of foods, for the gamut of tastes they run. I’m afraid of what we miss out on by habituating ourselves to add—add sriracha, add ketchup, whatever: either way, we’re homogenizing our taste buds.

A popular personality test found in the annals of the Internet is “Are You a Coke or a Pepsi?” These quizzes include questions like:

This kind of quiz gives me a bad feeling for the way it both downplays and overemphasizes the meaning of one’s soft drink of choice. I know, I know: it’s an Internet quiz. And it’s a soda. And it’s a hot sauce. But, I’ll admit it: After watching Griffin Hammond’s short 2013 documentary, Sriracha, I got a little creeped out. I like sriracha—I like it a lot. But I don’t want to be a hot sauce fangirl.

And whether you’re a fankid or simply a sriracha enthusiast, you probably want to give McDonald’s adoption of the condiment some reflection. With the popularity of the condiment, odds are this menu item is coming to a zip code near you; soon you’ll be able to add Signature Crafted Sriracha Big Mac Sauce to your Signature Crafted Big Mac. What does that mean? No one’s twisting your arm to go to McDonald’s, you might insist. Who even eats fast food anyway?

And yet: Americans value farm-to-table eating more than ever before. Will, if demand for their product continues to surge, Huy Fong Foods continue to use red jalapeños exclusively from Underwood Family Farms? At my grocery store here in LA, Huy Fong’s spot on the shelf is stickered with a starburst that says LOCAL! Will that, too, change? Does some of the little-guy-against-the-Man ethos vanish when sriracha becomes McDonald’s-mainstream?

Yes, and that’s only one cause for concern. (After all, there’s the problem of disambiguation. The name sriracha isn’t trademarked; anyone can grind jalapeños with garlic and sugar and salt, package it and sell it as sriracha. Or whip some up and keep it in their Paleo kitchen.) The corporate assimilation of “awesome sauce” by McDonald’s means the esoteric condiment gets folded into the ubiquitous blandness of Big Mac sauce. And you know what? The zing of the original gets lost, drowned in a tangy blah. There: That’s the sad, normalizing pinnacle of American success—that a trend, a taste, a single food can be engineered and commodified, made palatable enough for us all to be “lovin’ it.”