Toxic masculinity doesn't just target women: The viciousness and vacuity of modern American manhood is also harmful to the self 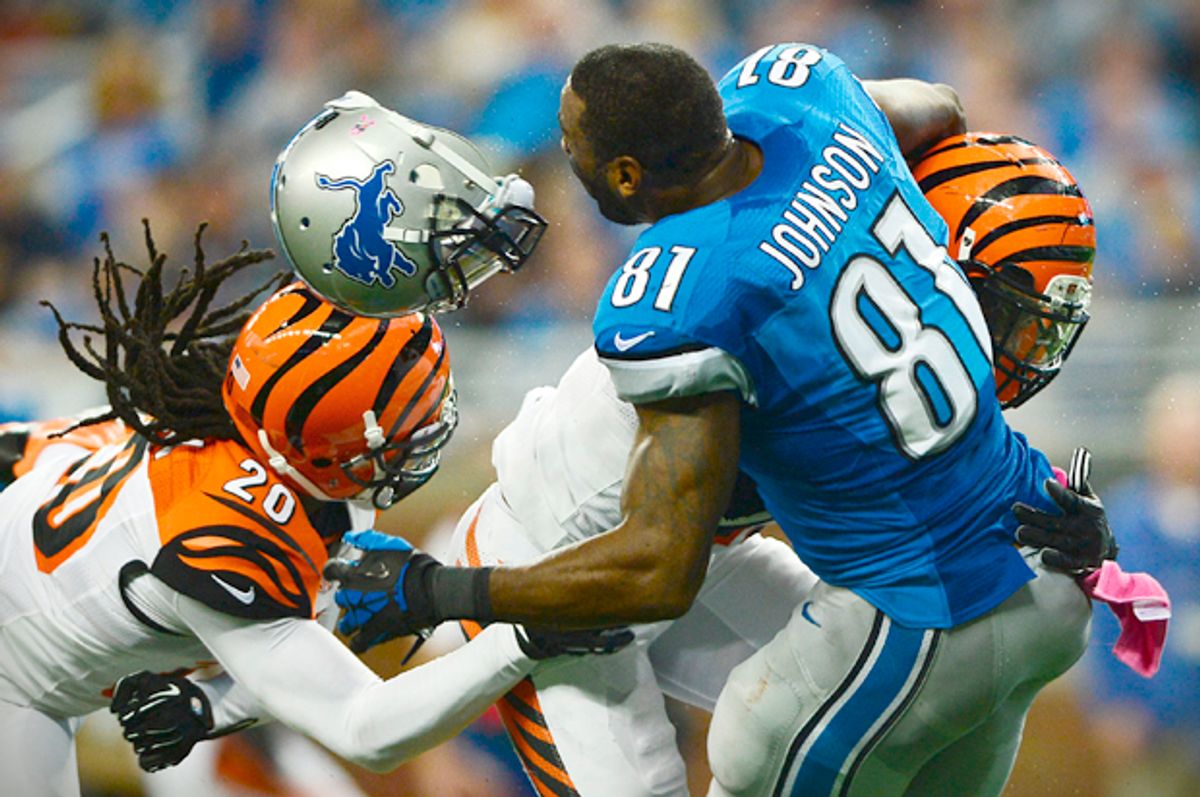 The late Jim Harrison – one of America’s greatest novelists and poets – acquired an unwanted reputation as a “macho writer.” He was hateful of both the word and the boneheaded behavior it describes, once explaining his objection to a literary critic, “I have always thought of the word ‘macho’ in terms of what it means in Mexico – a particularly ugly peacockery, a conspicuous cruelty to women and animals and children, a gratuitous viciousness.”

Critics with narrow cultural comprehension applied the label to Harrison, because he often wrote about roughneck, working class characters in the Upper Peninsula of Michigan or on the ranches of Montana. Harrison explained that men who live in a perpetual struggle of physical exhaustion and emotional stoicism, developing a spirit of steely resolve in the process, do so not because they are “macho,” but because they suffer from having limited choices and options for self-survival. A man does not help build a dam, like the protagonist of Harrison’s novel "Sundog," because he wants to construct an image of intimidation, but because he needs to feed himself and his children. The toughest man I’ve ever personally known, and also one of the most sensitive, was my grandfather. He experienced combat in World War II, because he was drafted, and he worked in the Material Service quarry, because hard, manual, and unionized labor was the best guarantee of middle-class stability in small-town Illinois for inhabitants without college degrees. He hoped his daughter and his grandson would have easier, less painful and less onerous lives, and when he died, he was relieved that we did.

Manhood in America has reached a bizarre and bipolar state of incoherence. Despite staggering levels of technological, intellectual, and cultural advancement, there remains an insistence on celebrating the most stupid and destructive forms of “ugly peacockery,” masquerading as strength and courage. Throughout American culture there exists a dangerous nostalgia for a lost, and largely imagined, age of masculine power, where real men got things done without the meddlesome supervision or maternal aid of institutions, regulatory bodies, or women.

The glorification, or at least, tacit acceptance of anti-intellectual and pre-industrial conceptions of masculine virility and potency contribute to the retention of high domestic violence rates and the scandal of routine rape in the military. Feminists have developed a term to attack insensitive and selfish expressions of chauvinism, calling it “toxic masculinity.” The phrase is cumbersome, and it carries the stench of self-pity, but it earns absolution for its rhetorical sins with its substantive veracity. Macho peacocks do develop an infectious form of masculinity that poisons everything it touches, often inflicting the most damage on the host. It is not only an assault, but a slow and steady suicide.

A recent New York Times profile of Kosta Karageorge, an Ohio State wrestler and football player who ended his own life with a bullet to the head while sitting alongside a dumpster, maps the dark world the macho peacock enters, and all of the pitfalls that wait within it.

Karageorge was born into prison cell of macho design, with no chance for parole. His father and uncle embraced an odd ideology that they were born to martyr themselves for the edification of barbaric rituals. His uncle cracked three helmets while playing football in high school, suffering concussions and other injuries, while his father once absorbed such a severe blow to the head, he woke up in a hospital disoriented, barely responsive to stimuli, and unaware of the reason for his hospitalization. He was back on the football field, using his skull as a battering ram, a mere two weeks after his release.

These brothers, with seemingly little input and no intervention from Karageorge’s mother, put Karageorge on a Neanderthal training regimen, leaving little room for childhood enjoyment or healthy intellectual development. Under the watchful and intense eyes of his father and uncle, Karageorge would begin every morning with pushups at the age of 12, and at the age of 14, began a strenuous weight training discipline. Family gatherings would often end with the insanity of Karageorge and his fully grown uncle getting into violent wrestling bouts.

Before eighth-grade graduation, Karageorge began losing hair. His father took him to the barber for a buzz cut so as to disguise the embarrassment of his bald spots. A doctor diagnosed his condition as stress-related alopecia, presumably from the pressure his father and uncle imposed on him to become a world class athlete. It is hard to imagine a more colorful, bold, and big red flag flapping in the wind, but Karageorge’s parents and uncle continued driving straight in the direction of the cliff’s edge.

In high school, Karageorge gorged himself on so much high-protein food that he had no choice but to carry a small trash can with him at all times in preparation for a gag reflex incitement of vomiting. As if puking in the high school cafeteria was not sufficient entertainment, he would jog to the point of delirium, often stopping only to vomit. In addition to regurgitation, Karageorge developed the hobbies of fist fights and firearm collection. It was at the age of 11 that Karageorge’s uncle and father first took him to the shooting range, and began their initiation of the boy into America’s weird gun culture.

As even a concussed child could predict, academics did not receive much emphasis in Karageorge’s household, meaning that in addition to providing life’s only purpose and source of empowerment, violent sports also were his only point of entry into college. A friend remembers finding it alarming that Karageorge once spoke about his disappoint over losing the statewide tournament in wrestling two consecutive years, while cleaning his rifles and handguns.

In the aversion of an even earlier disaster, Karageorge earned acceptance into Ohio State University, where he played football and wrestled. Throughout his higher educational experience, he found it increasingly difficult to function as a cognitive adult. For years he had hid the symptoms of multiple concussions, because he believed that to complain would make him look “unmanly.” When his parents knew of his concussions, they took no action. Karageorge’s father described one of his son’s worst concussions to the New York Times as “getting his bell rung,” using professional football commentators’ preferred euphemism for traumatic brain injury.

At the time, Karageorge could not even bear to look at his cell phone, because the dull light cast from the screen would give him headaches. Meanwhile, his behavior became so erratic, he eventually resembled a maniac. He would force his roommates to lift weights before they left the house, only allowing their exit when they earned what he called “man points.” He was also obsessed with guns, buying and selling them at gun shows and on Craigslist, and fondling them like sexual objects. Women did not have much of a presence in Karageorge’s life, but the lone girlfriend he did manage to have left him when his temper turned to hysterical fits of rage, both frightening and repelling her.

It never fails to fascinate that macho peacocks usually refuse to show interest in women, beyond viewing them as territory to conquer or irritants to eliminate. Typically, these men are the most eager to insult gay men, and the least reticent to express attitudes of extreme homophobia. At the same time, without a sense of irony or inconsistency, they fetishize the masculine, while completely rejecting the feminine; creating a social and recreational world of homoeroticism. Karageorge had a poster of a speedo-wearing Arnold Schwarzenegger in his bedroom, and would often surprise his roommates by wrestling them to the ground, occasionally destroying furniture in the process. One can only speculate about the strange sexual contradictions that occupy the minds of men who hate women, adore cartoon representations of the masculine, but consider homosexuality an anathema.

Karageorge sustained a severe concussion weeks before his suicide. Already unable to concentrate and unable to control his emotions, he must have felt as if his brain was in constant betrayal of him. An examination of his brain, performed after his death, revealed that he had Chronic Traumatic Encephalopathy, a degenerative brain disease resulting from multiple concussions, and common in football players, wrestlers, boxers, and military veterans. Even at his worst point, his parents encouraged him to play football.

Karageorge’s suicide is a modern American tragedy. Although when he reached the age of reason, he became responsible for his own choices and behavior, he was clearly collateral damage of a war over manhood, and a battle in which meaningless macho symbols — exhibitions of physical strength, brawls without cause — become more important than quality of life.

When considering the suicide of her son and her parenting, The New York Times reports that Karageorge’s mother asked, through tears in her eyes and a crack in her voice, “What did we miss?”

While it is impossible to dismiss the grief of a mourning parent, that question demonstrates a horrific state of self-imposed ignorance, and provokes a sad inquiry into how many other parents idly watch their children suffer trauma for phony athletic glory, just as oblivious to the short term losses and long term consequences.

The father turned his finger and thumb into a gun and held it up to his temple, recreating the suicide to the Times reporter. When commenting on Karageorge’s concealment of his symptoms, he explains, “We raised our son to be a strong man, and maybe that was his downfall. He wasn’t complaining and crying. My wife coddled him, but I was more: ‘One of these days you’re going to be depended upon to step forward.’” He then added, “There’s a ton of guilt there.”

Karageorge had a tattoo of Atlas covering his entire back. He said it symbolized how he “had the weight of the world on his shoulders.” He was not supporting a family. He was not running a business. He was not leading an Army into war. He was a college wrestler.

The burden he felt crushing him into the ground was a stone he placed on his own back, without coercion or threat of penalty, on a daily basis. A single mom, working a full-time job and trying to raise a family, overcomes more obstacles and shoulders a heavier load in a matter of hours than Karageorge had to confront in his entire life. The psychological oppression he fought had no genuine imposition from the outside world. It was a result of his upbringing, and his absolute faith in the value system of the macho lifestyle. With crucial collaboration from his father, uncle, and elements of wider American culture, the monster that murdered him was of his own creation.

The essential truth that purveyors of “toxic masculinity” violate, and what too many feminist critics of it miss, is that among its victims are men themselves. Life becomes much more pleasurable, comfortable, and joyful after emancipation from the macho prison. Releasing the backbreaking weight of macho nonsense makes life much easier, and the arbitrary and often cruel nature of the world is opposition enough without creating hardships and enemies where none need exist.

The heart breaks with the realization that Kosta Karageorge’s ugly demise was preventable beginning in his first moments of childhood, but that no one intervened, and that he himself was even unwilling to advocate for his own health. Millions of other boys, too young to make their own decisions and too immature to discover how to best harvest their own potential, do not have to experience the same sad ending.