"Independence Day: Resurgence" can imagine all kinds of futuristic wonders—but not two men who are in love kissing 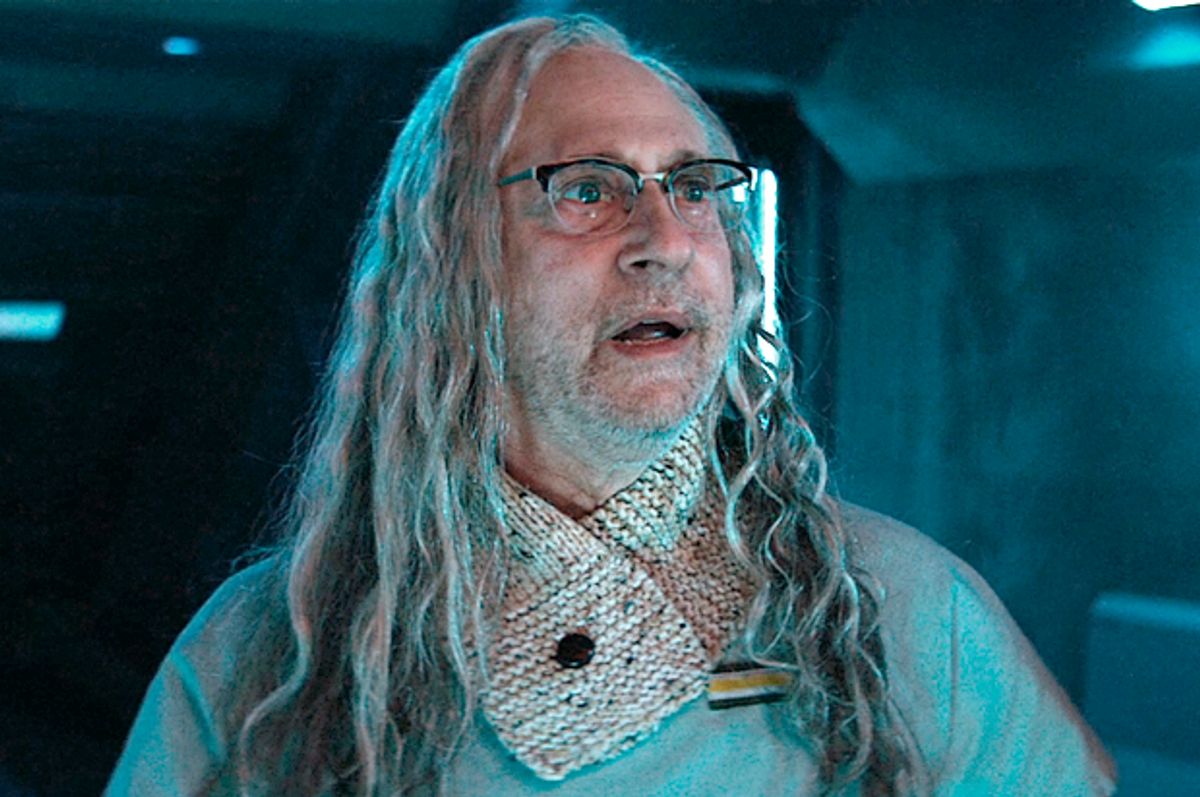 Your partner has been in a coma for 20 years. Because you happen to be a doctor in the hospital in which he is housed, you have spent that entire time taking care of his every need—cutting his beard, bathing him, and making sure the situation doesn’t turn into “Million Dollar Baby.” One day he abruptly awakes, and the moment is startling and emotional. Do you:

In “Independence Day 2,” the answer is anything but 1.

Roland Emmerich’s long-awaited follow-up to his 1996 aliens-blow-up-the-White-House disaster flick picks up two decades where the original left off. You might remember Dr. Brackish Okun (Brent Spiner), the wild-eyed scientist Captain Hiller (Will Smith) and President Whitmore (Bill Pullman) meet at Area 51. It’s assumed that he died in the first installment, after being used as a human puppet by an alien, but he managed to survive. John Storey (who had a bit part in the previous feature) plays Dr. Isaacs, the loving physician who has stayed dutifully by his partner’s side.

Emmerich, who is openly gay, teased the debut of the franchise’s first gay couple in the weeks leading up to its premiere. “We don’t make a big deal out of it,” the director said. Watching the film, though, it would be easy to mistake the two men as little more than good friends; the closest the two men get to intimacy is discussing knitting and orchids. (“Who’s going to make sure you wear your pants in the morning?” one asks.) The Guardian’s Ben Lee writes that the scene is depicted with an “embarrassing Hays Code coyness.”

When it comes to straight couples, both “Independence Day” films aren’t nearly as shy. Before Hiller goes off to save Earth from alien invasion in 1996, he passionately locks lips with Jasmine, the stripper with a heart of gold played by Vivica A. Fox. (Fox and Smith even won the MTV Best Kiss Award.) Emmerich recreates that moment in the sequel after hottie orphan fighter pilot Jake Morrison (Liam Hemsworth) returns home after kicking extraterrestrial butt. Whitmore’s daughter (Maika Monroe), who also happens to be Jake’s girlfriend, runs toward him for a “welcome home” smooch. It’s reminiscent of the famous Alfred Eisenstaedt photo of a sailor kissing a nurse in Times Square, celebrating the end of World War II and the defeat of fascism.

You can blame the double standard on Hollywood homophobia, and you wouldn’t be wrong. But if “Independence Day 2” isn’t into equal opportunity PDA, it’s both reflective of an industry that’s struggling to depict the lived realities of LGBT people and a public that too often remains uncomfortable with the sight of two men kissing. While America has made enormous strides with it comes to legal recognition for same-sex couples, queer intimacy remains shockingly taboo. That stigma has toxic effects—both for cinema and society at large.

John Schlesinger’s “Sunday Bloody Sunday” is often credited as the first movie to show two men affectionately kissing on screen. There are, however, earlier examples of same-sex intimacy. The Cecil B. DeMille silent picture “Manslaughter” shows two women embracing during a Roman orgy. In 1929’s “Wings,” a man comforts his friend, stroking his hair and kissing his face, as he is dying.  But “Sunday Bloody Sunday” brought what was often portrayed as subtext to the fore: Daniel Hirsch (Peter Finch), a Jewish doctor, is involved in a love triangle with a bisexual bohemian sculptor (Murray Head). Hirsch is notable as one of the few gay characters of the time who is happy and successful, portrayed without remorse or guilt about his sexuality.

The landmark film’s matter-of-fact portrayal of same-sex relationships reportedly scandalized audiences. Critic R.D. Finch remembers, “I recall seeing the movie in a theater during its first run, when the sudden—and plainly erotic—kiss between Peter Finch and Murray Head a few minutes into the film had much the same galvanic effect on the audience as Sissy Spacek's hand popping out of the grave at the end of ‘Carrie’ a few years later: nearly the entire audience reacted collectively with a gasp of shock and surprise.”

If films like “Reflections in a Golden Eye” and “Suddenly Last Summer” intimated their characters unspoken longings, television would struggle to make those desires overt. The first same-sex kiss on television was in 1991 on “L.A. Law,” between C.J. Lamb (Amanda Donohoe) and Abby Perkins (Michele Greene). According to Greene, the brief peck was nothing but a sweeps week stunt—and it never resulted in a real relationship being developed between the two women. “Roseanne” would follow a few years later by partaking in its own lady-on-lady action, but the kiss between Barr and guest-star Mariel Hemingway is played for laughs. Roseanne even licks her sleeve after getting her first taste of the love that dare not speak its name.

The short-lived series “Hot l Baltimore,” produced by Norman Lear, gave us TV’s first gay couple back in 1975, but it wasn’t until 2000 that two men finally got their turn on the small screen: a brief Jack McPhee (Kerr Smith) and Ethan (Adam Kaufman) on “Dawson’s Creek.” Jack travels to Boston to have his “Say Anything” moment with Ethan, the college student he fell for during the WB drama’s second season. But after a short embrace, Jack discovers that the object of his affection is already spoken for. Ethan has a boyfriend.

It would seem that we’ve come a long way since CBS ordered “Picket Fences” to nix a lesbian kiss in 1993 over fears that it would alienate the show’s target audience. While shows like “Empire” and “Glee” have unapologetically featured same-sex love, “How to Get Away With Murder” became the first ever primetime show to feature interracial analingus in 2014. Freeform aired the youngest gay kiss in TV history on “The Fosters,” between 13-year-old Jude (Hayden Byerly) and his friend, Connor (Gavin MacIntosh), but it wasn’t without controversy. When Ryan Murphy’s “The New Normal” (about a gay couple who decide to adopt) debuted in 2012, it was boycotted, with some stations refusing to air it. Facing that backlash, it took a season and a half for “Modern Family” to let Mitch and Cam kiss.

More recently, a PSA for the We the Brave campaign, which seeks to educate gay and bisexual men about sexual health, was widely protested in South Africa. The TV spot was the first ever to feature two men sucking face. According to the country’s channel 24, reactions from outraged viewers ranged from “this is offensive and disgusting” to calling the commercial “a step too far.” One viewer protested, “Explain this to my daughter.” It’s extremely similar to the public backlash when former pro footballer Michael Sam kissed his boyfriend live on ESPN after finding out he was the first gay player drafted in the NFL.

The controversy around Sam’s emotional PDA illustrated just how uncomfortable many Americans remain with seeing physical intimacy between queer people, especially men. According to a 2014 study from the American Sociological Review, 45 percent of respondents reported being comfortable with seeing two men kissing—even on the cheek. Thirty-eight percent of those surveyed in an Indiana University report were likewise made uneasy at the sight of men holding hands. Just 22 percent of respondents in that survey thought it was “acceptable” for a same-sex couple to French kiss in public, as compared to the 50 percent who thought the same display would be OK if the couple were heterosexual.

This isn’t just an issue for audiences who long for better LGBT representation at a time when pop culture continues to fail queer people. A study from USC Annenberg published in August showed that queer characters are “virtually nonexistent” in Hollywood’s top movies: Between the years of 2007 and 2014, just .4 percent of characters with speaking roles were LGBT-identified. A GLAAD report from 2016 showed that the number of movies with queer characters actually decreased last year. Even when gay characters are in the picture, movies like “The Imitation Game” and “Philadelphia” often treat their romantic lives with kid gloves.

This double standard also affects queer people’s everyday realities. On June 12, an armed shooter gunned down 49 people at Orlando’s Pulse nightclub, a gay bar that acted as a crucial safe space for Florida’s LGBT community. On the evening of the attack, Pulse was hosting its monthly Latin Night. According to the gunman’s father, he was angered after seeing public displays of affection between men. “We were in Downtown Miami, Bayside, people were playing music,” Seddique Mateen told press. “And he saw two men kissing each other in front of his wife and kid and he got very angry.” The result of that rage and possible internalized homophobia, as reports suggest that the shooter may have been struggling with his sexuality, was the deadliest mass shooting in U.S. history.

Across the country, LGBT people staged a worldwide kiss-in on social media in response to the Orlando tragedy—with the hashtag #TwoMenKissing trending on Twitter in the days following the shooting. Gay and bisexual social media users posted photos of themselves embracing their partners, and the New York Times called it “an act of love and activism.” Jon Collins, who works as a television producer in Los Angeles, told the Times that he wanted to challenge the homophobic thinking that inspired the shooter. “It’s natural, it’s normal, it’s just love,” he said.

Roland Emmerich always said that “Independence Day 2” would be a small step forward for LGBT characters. “You start small and then you get bigger and bigger and bigger, and one day you have a gay character as the lead and nobody will wonder at it no more,” the director told The Hollywood Reporter back in 2015. His film, however, depicts a world that has come together after a devastating attack to make enormous progress. In “Independence Day 2,” space travel looks like the intergalactic ballet of “2001: A Space Odyssey” and flying cars dot the sky (ala “The Jetsons”). As the film explains, studying alien technology led to incredible leaps forward in human development, as well as an unprecedented era of peace.

It’s extraordinarily telling that we can envision a world where war and conflict have been resolved, but not one where two men can do something that should be so simple.