Protesters, white nationalists and armed delegates: What could possibly go wrong at the GOP convention? 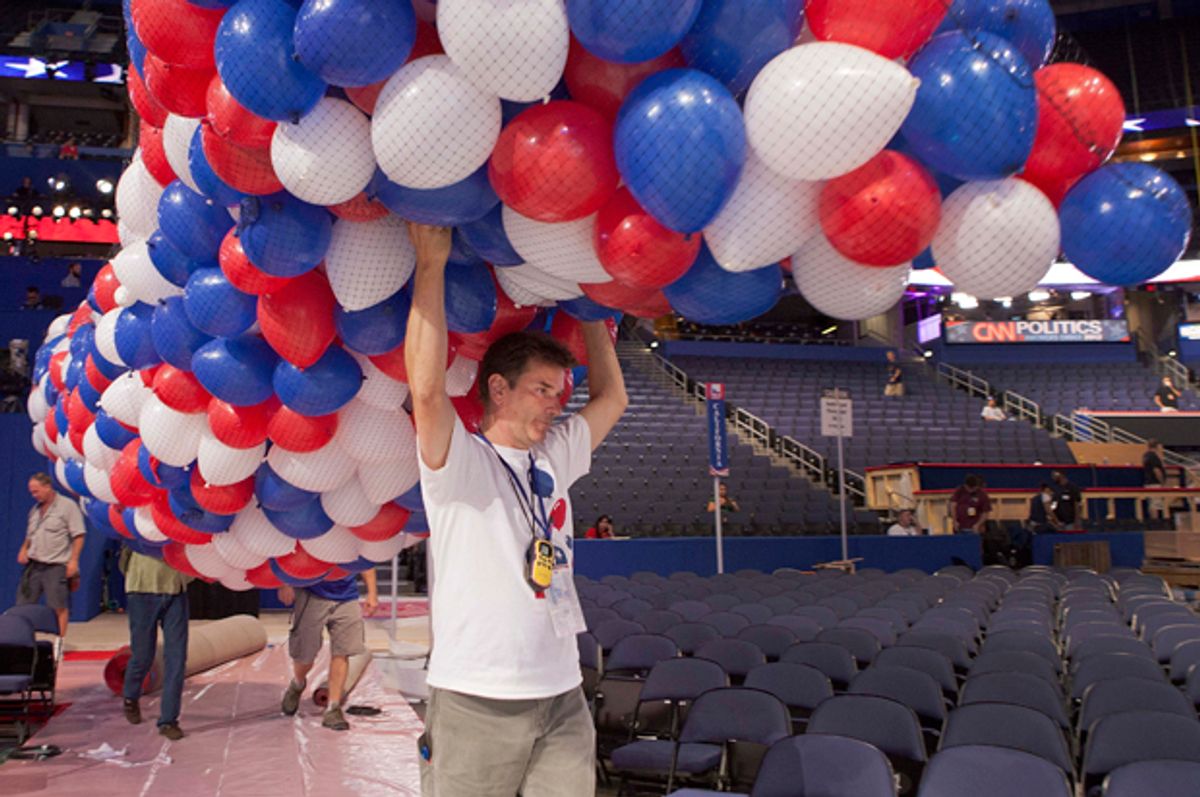 Balloons are carried across the convention floor in preparation for the 2012 Republican National Convention. (AP/David Ake)
--

If you are in Cleveland during the Republican National Convention in two weeks, here are some sights you can expect to see:

If the first three items on that list sound like the ingredients for a combustible mixture, well, that’s because they are. Just last week in Sacramento, members of the same white nationalist organization that plans on attending the RNC, the Traditionalist Worker Party, were holding a rally when they encountered a group of counter-protesters. Fighting broke out, resulting in seven stabbings and nine hospitalizations.

The rally, held in conjunction with a group called the Golden State Skinheads, was not a protest for the usual white supremacist grievances about race mixing or Jews or too many brown-skinned people immigrating to America. It was, according to the New Yorker, about Donald Trump. It was about showing the world that, in the words of the head of the TWP, there are hard-core Trump supporters who “won’t back down” in the face of people protesting Trump’s xenophobic, racist campaign.

This melee comes on the heels of a primary season in which Trump rallies were marred by violence when anti-racism protestors ran up against the candidate’s supporters. At least one white supremacist was drafted to serve as a Trump delegate at the convention before the campaign caught wind and asked him to step down.

Trump himself got caught flat-footed when asked to disavow the endorsement of his candidacy by known Ku Klux Klan leader David Duke. Throughout the spring, he has refused to offer a full-throated denouncement of this surge of white supremacy, which has lain just below the surface of conservative politics for decades. Why would he denounce it when it is one of the animating forces driving the GOP base? Especially since, by all appearances, he agrees with some of the ideas underlying it. Mexicans are swarming the border and stealing American jobs? That’s a foundational element of both Trumpism and the white nationalism of the TWP and other groups.

Republicans will try to deflect this argument with cries of “Democrats are the real racists” without offering any actual evidence to back it up. But the truth is that the white supremacists making their presence felt, and the failure of GOP leaders to nip it in the bud decades ago, is a failure of moral cowardice. It is the natural end result of decades of Rush Limbaugh’s racist gibberish. It is the natural end result of the William F. Buckley and the National Review, no matter how much the old boy tried to gussy up his racism in high-flown language. It is the natural result of making a hero of Andrew Breitbart, whose namesake website is a snakepit of racist sludge…and not coincidentally, practically a public-relations outfit for the greatness that is Donald Trump.

Trumpism is the natural fusion of decades of tolerating this racist rhetoric on the fringes until those fringes suddenly became the center of the party, combined with a candidate who not only is unafraid to repeat it, but seems genuinely clueless as to how toxic and degrading his words are. Republicans have done nothing about it, which has only served to normalize it. So now the entire party is going to wear this millstone around its neck for generations.

The occasional party hack resigning his delegate slot in protest of nominating Trump is not going to counter that.

Which brings us back to Cleveland. Certainly, there is no guarantee that violence will break out that week. Hopefully, the protesters will be vociferous but restrained, and the police department will keep the peace. But the images of white supremacists escorting sour-looking delegates in and out of the arena, or rural Republicans walking past the designated protest zone with their Glocks bulging under their sport coats, are not what leaders of a sane, rational, functioning political party would like to see. Unfortunately for them, it’s what they are going to get.