"The other side has got nothing to offer you": President Obama "goes off script" in first campaign rally with Clinton

"Can I be blunt," Obama asked Tuesday. "If your concern is working people, then this election is not a choice" 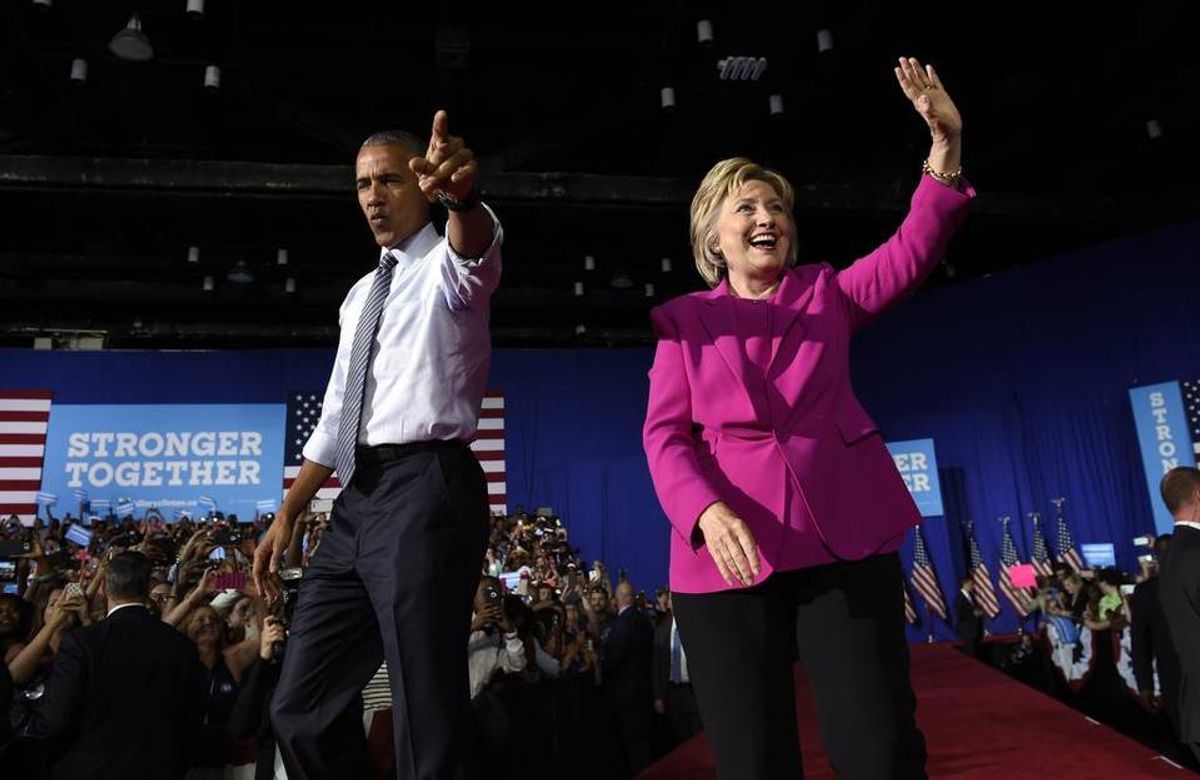 Hours after the FBI's surprise announcement that it would not recommend criminal charges against Hillary Clinton for her use of a private email server while at the State Department, President Obama hit the campaign trail on her behalf for the first time.

Obama and Clinton made their first joint campaign appearance of the 2016 presidential campaign at a rally in Charlotte, North Carolina, Tuesday. And it wasn't just the timing that made the tandem Obama-Clinton event remarkable. According to NPR, no sitting president has campaigned as vigoursly for his chosen successor in 100 years. At her rally, Obama's passion for Clinton and her campaign -- hours after FBI Director James Comey called her handling of classified information while secretary of state "extremely careless" -- was on full display.

"We stand together because we know we are stronger together," Clinton said, explaining how the two former competitors went on to work together. "In America, we put common interest above self interest."

The duo flew to Charlotte together on Air Force One, they rode to the rally together in Obama's armored limousine, known as "The Beast," and Obama brought along his presidential seal for the podium he shared with Clinton. Obama and Clinton originally planned to make their first campaign appearance together in Wisconsin, but the June 15 rally was postponed due to the mass shooting at an Orlando nightclub. Despite the awkward timing of the rescheduled pairing, neither Clinton nor Obama made mention of the FBI's investigation.

"Not only did, I think, she impress me during the campaign, but she frankly really impressed me in terms of how she handled the loss of that primary," the president explained after being introduced by his former secretary of state, who lavished her former boss with the "credit" she said has been unfairly withheld from him. "She was a trouper. She came on board, started campaigning with me almost immediately, worked tirelessly."

"Can I be blunt," an energetic Obama asked the equally riled up crowd.  "Hillary's got her share of critics. That's what happens when you've been in the arena."

“I can tell you this, Hillary Clinton has been tested,” he continued, intermittently interrupted by the cheering crowd. “There has never been any man or woman more qualified for this office.”

“I am here to tell you that the truth is nobody fully understands the challenges of the job of president until you've actually sat at that desk,” Obama said. “Everybody's got an opinion, but nobody actually knows the job until you're sitting behind the desk. Everybody can tweet, but nobody actually knows what it takes to do the job until you sit behind the desk,” he said, joking that his daughter, Sasha, tweets without expectations of taking the White House.

Although he never mentioned Donald Trump's name, Obama argued against politicians who promise a return to “some imaginary past."

"The other side has got nothing to offer you," the president insisted. "If your concern is working people, then this election is not a choice."

In a video released earlier in the day, Obama further laid out the case for Clinton.

"She fought for human rights, she fought for democracy, she tried to avoid conflicts through diplomacy," Obama said, as images of Clinton reviewing papers in the situation room on the night of the Osama bin Laden raid flashed across the screen. "When I consider what I’ve learned over the last seven and a half years, this job ultimately is not about making fancy speeches. It’s not ultimately about public appearances. It’s about when nobody’s watching and you’re alone or in a small group of people and you’re making really tough decisions, do you have somebody who’s steady? Do you have somebody who has done their homework? It’s got to be somebody who recognizes that we all have a part to play. And that’s something I’m absolutely convinced Hillary Clinton can do. It’s one of the reasons I’m sure she can be an outstanding president."

In a new interview, @POTUS talks about why Hillary has everything it takes to be president.https://t.co/MRwg5h0LMq — Hillary Clinton (@HillaryClinton) July 5, 2016