Trump's profitable bigotry: The takeaway from his anti-Semitic tweet — his run is more a grift than a real campaign

Is Trump trying to win? Or is his racist dog-whistling about building an audience for his next endeavor? 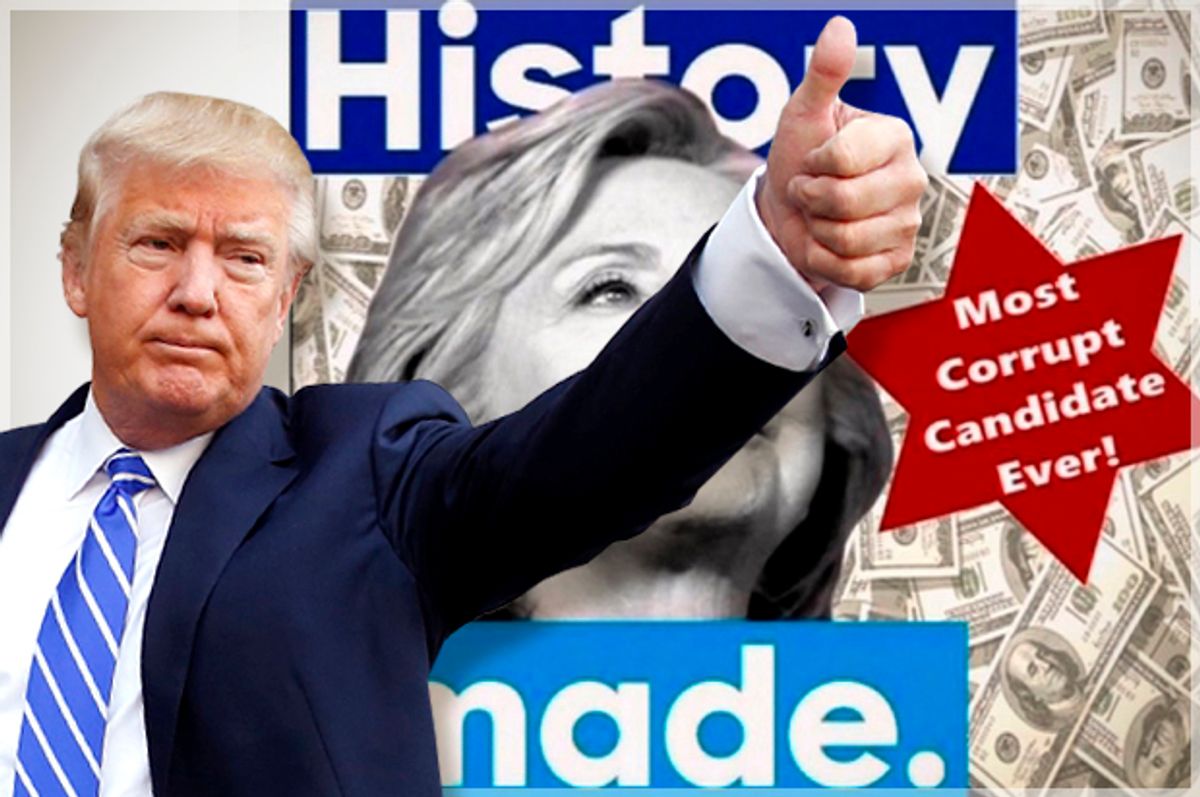 Over the weekend, Donald Trump tweeted an image accusing Hillary Clinton of being corrupt that had a Star of David imposed over a pile of money on it.

The whole thing is a sickening reminder of how Trump's campaign loves playing footsie with the bottom-feeders of the country — white supremacists, anti-Semites, conspiracy theorists — but it also brings up another serious question, yet again: Is Trump actually trying to win the presidency? Or is he playing at something else here?

The Trump campaign is trying to play this off like it's just an accident, putting out a statement from the social media director Dan Scavino:

But this raises more questions than it answers. It was not hard for journalists to figure out which Twitter account it likely was, run by an anonymous person going by the name FishBoneHead. The feed was a dumpster of right-wing offal, including a tweet involving a swastika made out of Clinton's face and racist cartoons about Muslims.

This is, needless to say, highly irregular, and not just because the feed that this image seems to come from is so disgusting. Normal campaigns generally don't take imagery from third party sources, much less unsourced ones. They hire people to make original content for them.

Clinton's Twitter feed  puts out a lot of images and memes, but they are all done in a clearly recognizable in-house style. Bernie Sanders puts out fewer images, but the ones that are put out are usually straightforward ones that feature quotes from the candidate. No professional campaign would do something as amateur as pick up random images from strangers who spend their days spewing vitriol on social media.

Scavino's Twitter account suggests why he thought that getting inspiration from some rando calling himself FishBoneHead was a good idea. Scavino follows some folks you'd expect a communications professional to follow, like journalists, but he also follows some extremely questionable characters.

For instance, Scavino follows Mike Cernovich, a popular alt-right author who puts out "pick-up"-style self-help materials aimed at insecure men, and was a ringleader in "Gamergate," an online movement geared towards harassing women in the video game world.

Writer Matt Binder collected some of Cernovich's greatest Twitter hits a couple years ago. Cernovich does things like taunting strangers on Twitter about being fat and obsessing about what he calls "slut signs," i.e. evidence that a woman likes sex more than Cernovich would prefer her to. He's also a rape denialist who offers "advice" on how to shore up a defense case in case you're charged with rape:

Have you guys ever tried "raping" a girl without using force? Try it. It's basically impossible. Date rape does not exist.

@jmdiv It's also anti-rape game. After abusing a girl, I always immediately send a text and save her reply.

It is NOT true that Clinton and Obama will use Air Force One for campaigning They are using her plane pic.twitter.com/ZkgWnihEsN

And Darren Jordan, who is so proud of this race-baiting tweet about the Clintons and Loretta Lynch that he pinned it:

And that's on top of some other rather shady characters, like Roger Stone (who is also tight with Trump), Jim Hoft, John Nolte, and, for added comic relief, Scott Baio.

It's not just Scavino, either. As Fortune documented, many members of the Trump campaign staff have questionable social media feeds that include following white supremacists.

Mucking around in the world of the alt-right just isn't the behavior of people who are really trying to win a campaign. To add to the weirdness of all this, Scavino has also been blocking real journalists on Twitter, which is the opposite of what a communications professional should be doing.

Perhaps the problem is that it's hard for Trump to get better staffers. As Jim Newell at Slate points out, Trump campaign headquarters is losing staffers as quickly as they can hire them. Many new people last just a week or two. This is no doubt one reason that the Trump staff is literally a tenth the size of Clinton's.

But there might be something else going on here, as well. Doing things like tweeting out anti-Semitic images and then offering half-baked denials is not really how you win an election. It is, however, a great way to cultivate the loyalty of the hard right base.

Trump's song and dance of tweeting racist stuff and then playing dumb about it feeds the racist right's narrative about itself: That they are being oppressed by a "politically correct" elite that sniffs at the way Real Americans© communicate, i.e. through eye-bleedingly loud memes and cartoons that are as racist as they are garish.

It's further evidence that this is less a real presidential campaign and more what Republican strategist Rick Wilson dubbed a "scampaign": Using the free press that a presidential run gets you as free advertising for a post-campaign career as a right-wing demagogue.

You don't need to be a hardened campaign professional to know that it's unwise to snag ugly memes off random Twitter accounts that spew racist propaganda all day. But Trump is already in talks for a post-campaign TV network, and the tenor of his campaign suggests he believes that the alt right will be a lucrative audience for such a thing.