"You cannot save the whole world at one time": Revisit Salon's 2000 conversation with Elie Wiesel

The Nobel laureate discussed Palestinian statehood, hatred the First Amendment, and more with Salon in 2000 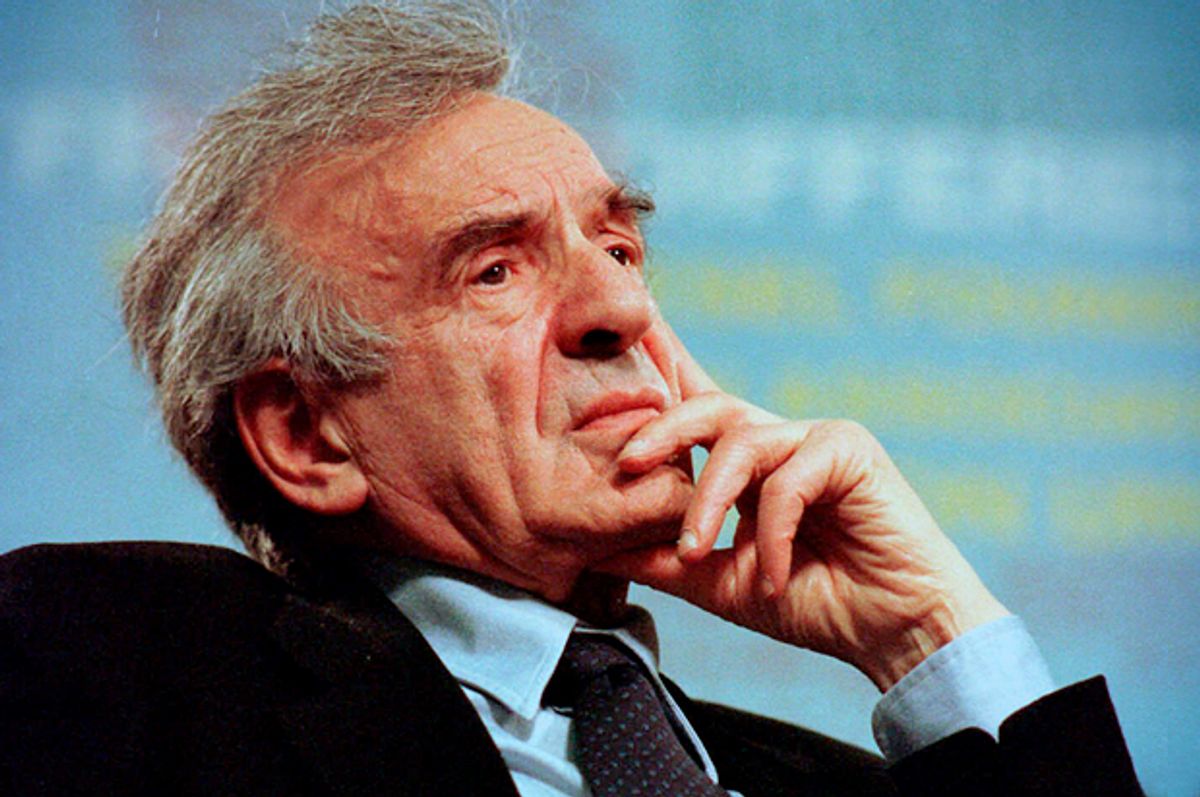 Editor's Note: Elie Wiesel died  at 87 on Saturday after a long illness. In 2000, Wiesel joined Salon's Jill Priluck for a wide-ranging interview in which the Nobel-prize winning author and Holocaust survivor discussed Palestinian statehood, his memories of his father and fellow survivor Primo Levi, and his thoughts on intervening to prevent future human rights atrocities. Read the full interview below:

The world hasn’t been the same since the 1958 publication of Elie Wiesel’s “Night,” his slim, powerful script of being deported with his family from the Transylvanian village of Sighet to Buchenwald and then Auschwitz. Neither has Wiesel, the celebrated writer, teacher and Nobel Prize-winner who recently published the second volume of his memoirs, “And the Sea Is Never Full.”

With millions of readers in some 30 languages, “Night” spawned a generation of Holocaust writings. But “Night” did something else. It gave voice to Wiesel’s memory — and, in turn, to the memory of thousands of genocide victims.

Wiesel, 71, lives on Manhattan’s Upper East Side, a neighborhood dominated by high-rise apartment buildings. We meet in his study — a separate apartment adjacent to the one he shares with his wife — which, with books everywhere, resembles a library. Behind Wiesel’s desk are volumes of both the Jerusalem and Babylonian Talmud. Above it is a picture of the house in Sighet where he was born. He looks tired, as if he’s been working all night, and at times he speaks so softly it’s difficult to hear him. Wiesel’s deep, brown eyes hold infinite layers of sadness, testament to the darkness he witnessed in the Nazi death camps during World War II.

Last night at the 92nd Street Y you told a story about an unclothed man escaping Babi-Yar, a concentration camp, who knocked on a stranger’s door and pretended to be Jesus in order to be asked inside. That’s the kind of story that none of us would have heard without you.

Well, that’s why I have to make [telling] these stories my goal. So I can testify to the world as much as possible. Some say there were 33,000 killed by Nazi Germany at Babi-Yar.

The title of the second volume of your memoirs — like that of the first volume — comes from the writings of King Solomon.

I love the joys of the ancient text. The title of the second volume is the second part of the same verse: “All the rivers run to the sea/And the sea is never full.” I cut it in half.

Why that particular verse?

Because of its meaning. The sea, which is of course infinite — I think memories are infinite. Whatever we do, whatever we say, whatever we give, whatever we write, it would still not be enough. My feeling is that if I knew all the survivor’s stories, and had done nothing else but speak about them, still the sea would not be full. My role is to write and to teach. Occasionally, if people think I can help them, I will help. Sometimes I feel I can break through. Other times I don’t break through. I have no power, but I have access to those who have power.

And words, of course.

Where are the most frightening human rights violations occurring?

Iran. The religious fanaticism is atrocious. And then the Balkans — still they have not settled that huge disaster; it’ll take many years, maybe decades. And then we have Ireland. It’s moving in the right direction. I’m optimistic it will pick up in the Middle East. My feeling is that in the year 2000 a serious breakthrough will occur.

Barak is Rabin’s disciple, and I think he will provide the necessary hope for Israelis to trust that it’s possible to make peace with Syria and the Palestinians. As you can see in the papers today, it’s moving. It’s moving.

And you think it will result in Palestinian statehood?

My feeling is that this is what the Israelis are going to do. I have no idea about how they will do that, but Barak is now moving very fast. Ultimately I am sure they are ready. I am absolutely [in agreement] with Israel that Jerusalem must remain a united city as the capital of Israel. My feeling is that the doves — and Barak is a dove — would not touch it.

I went for the International Rescue Committee’s March Against Hunger. We had just discovered the atrocities, and we went to help the survivors. We saw the people coming through, but we were not allowed to bring them food and medicine. Aranyaprathet is a huge camp — 100,000 people were there. At least.

But you didn’t go to Rwanda.

No, I only go to places that I am called to go to if I can help by being there. In that case, I spoke with enough people who were there. It was atrocious. It could have been prevented. No doubt about it.

How could it have been prevented?

Why is there so little intervention?

Usually it’s for political reasons, not for moral reasons. Morally the reasons are to intervene. Politically, there are other considerations — polls, votes.

In 1969, after 20 years of news reporting, you started moving away from journalism. What made you leave?

The language did not encourage me. I realized that I spent my entire life using maybe 400 or 500 words. All I had to do was change the names. Sometimes this person said, sometimes another person said. But the word “said” remained. And I said I don’t want to live like that. I worked then for such a small paper, Yedioth Ahronoth, then a poor paper and my highest salary was $400, including all the expenses. The good thing about it? The New York Times. We always used to go to the New York Times, pick up the paper in the evening and then steal a few stories.

You would report some of those stories, ones that would be appearing in the Times the next day?

Tell me a little bit about the role of the Talmud in memory — and what it gives you.

Talmud I study every day. It gives me, first, my childhood. I go back to the lessons in childhood. And also it gives me the possibility of entering the different geography and different history of 2,000 years ago, which is marvelous. You cannot study a page on Talmud and not feel the impact of all those who have studied during 2,000 years. The teachers and the disciples become your friends. You are surrounded by friends. It helps you overcome solitude.

Are the passages about your father in “And the Sea is Never Full” about dreams that you’ve had?

They are all dreams. I have dreamt a lot about my father. In the last 10 years more than before. Much more. They change, but that’s why I always take notes.

So much of your life’s work revolves around him. How do you feel about that relationship being so public?

I’m 71. It’s the end of the century. We’re coming to the end of something. Who knows if this is the last opportunity I have to say publicly how I feel about him? I was there when he died and the conversation has been interrupted and I try to continue it. I have to release things which I usually kept secret, but it’s only the tip of the iceberg. I want to continue. I want to share these experiences as much as possible with those who want to know.

You were close with Primo Levi?

Pretty close. I wrote about him. We were together on the same block in the same barracks in Auschwitz. I miss him. We had a common language. I spoke with him a few days before he died. I didn’t share his guilt. I don’t think survivors should feel guilty. Some do. Some don’t. Even those who do shouldn’t, in my opinion. The guilty should feel guilty. Not the victims. The irony is that the guilty don’t feel guilty and the survivors do.

There’s still so much hatred, even on the Web. We’ve got white supremacists, anti-Semites, Farrakhan …

Hatred is always dangerous. It’s contagious. It’s out of control, but there’s nothing you can do about this Web. I don’t know how to use the computer, but I hear. Those who deny the Holocaust [took place], they’re always there. Nobody can stop them. In some places, you know, in France, if they say so publicly, it’s a felony and one goes to jail. But not here — First Amendment. And I am for the First Amendment.

This century, which has seen so much evil, has not changed human nature. I describe it to one person and hope they will do the same to another person. You cannot save the whole world at one time.

Jill Priluck is a writer who lives in New York.