"Not justified": The biggest findings of Chilcot report, which blasts British role in catastrophic Iraq war

After 7 years, the U.K.'s 2.6 million-word Iraq War Inquiry has been released. Here's a summary of the main points 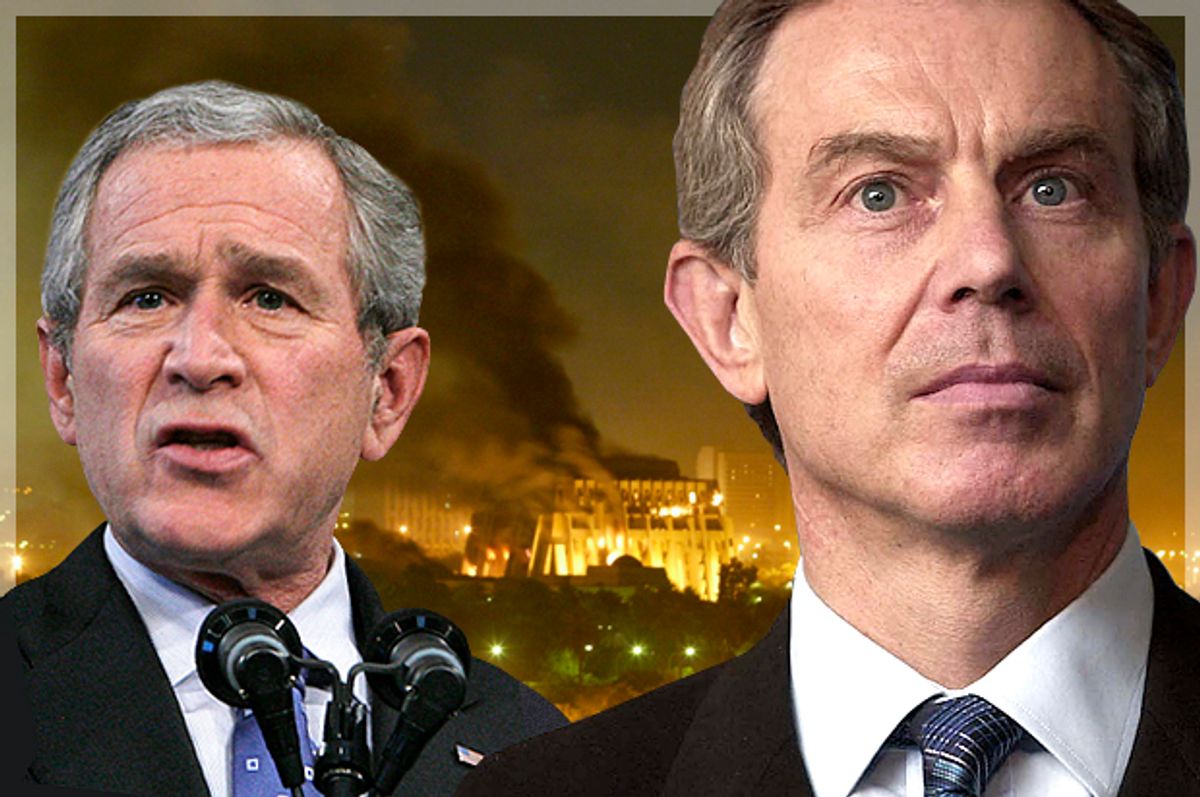 After seven years of investigation, the British government has released its exhaustive investigation into the Iraq war.

The Iraq Inquiry, also known as the Chilcot report, is massive, at a staggering 2.6 million words in length. The executive summary alone is 150 pages long. It is accompanied by a full 12 volumes of evidence, findings and conclusions.

The report meticulously chronologizes what happened before, during and after the invasion and occupation. It has been referred to as the British government's "last word" on the war.

John Chilcot, a senior politician who sits on the British government's Privy Council advisory board, was appointed as chair of the inquiry.

Chilcot has long been criticized for the extreme delay in the release of the report. Early reports originally suggested it would take just over one year.

Since the investigation was announced, politicians and activists have also condemned its secrecy and lack of transparency.

From day one, Prime Minister Brown said the inquiry would not seek to "apportion blame" and would instead identify "lessons learned."

Despite its large limitations, nevertheless, the report reaches damning conclusions. It officially confirms that the invasion of Iraq was not necessary; that the British government sold the war to the public based on exaggerated, faulty intelligence; and that the foreign occupation fueled instability and violence inside Iraq.

"We have concluded that the UK chose to join the invasion of Iraq before the peaceful options for disarmament had been exhausted. Military action at that time was not a last resort," Chilcot made clear in his public statement on Wednesday, July 6.

The report notes that the British government's decision to use force "became even more controversial when it was subsequently found that Iraq’s programmes to develop and produce  chemical, biological and nuclear weapons had been dismantled."

After the Sep. 11, 2001 attacks, British Prime Minister Tony Blair declared that the U.K. would stand “shoulder to shoulder” with the U.S. to fight extremism. Blair joined the U.S. in its war in Afghanistan, and sided with President George W. Bush in his plans to subsequently invade Iraq.

"In December 2001, Mr Blair suggested a strategy for regime change in Iraq that would build over time, including 'if necessary' taking military action," the report says.

To justify the war, Bush and Blair claimed Iraqi dictator Saddam Hussein had developed what they called "weapons of mass destruction."

Chilcot emphasized that the British government's judgments about Iraq’s weapons capabilities "were presented with a certainty that was not justified."

"It quickly became apparent that it was unlikely that significant stockpiles would be found," the report notes, referring to the weapons of mass destruction accusation. "This led to challenges to the credibility of both the Government and the intelligence community."

Chilcot stressed that it "is now clear that policy on Iraq was made on the basis of flawed intelligence and assessments."

"They were not challenged, and they should have been," he added. He did not mention the millions upon millions of people in the U.K., the U.S. and other countries throughout the world who did challenge the U.S.-led invasion.

The report highlights that "there was no evidence of links between Iraq and Al Qaida," although the U.S. and U.K. implied this to sell the war effort.

In March 2003, when the invasion began, "There was no imminent threat from Saddam Hussein," Chilcot stated.

He said a strategy of containment could have been continued, pointing out that the majority of the Security Council supported continuing U.N. inspections and monitoring, not a military invasion.

Prime Minister Blair insisted that the problems that arose in Iraq could not have been foreseen. The inquiry came to the opposite conclusion, stressing that many of the difficulties arose from risks that were evident from the beginning.

"The consequences of the invasion and of the conflict within Iraq which followed are still being felt in Iraq and the wider Middle East, as well as in the UK," the report says.

"It left families bereaved and many individuals wounded, mentally as well as physically. After harsh deprivation under Saddam Hussein’s regime, the Iraqi people suffered further years of violence."

That violence continues to this day, with the spread of extremist groups throughout the country. Prime Minister Blair has previously admitted that the invasion of Iraq led to the rise of ISIS, a genocidal fascist group.

The report notes that the U.S. and U.K. "exacerbated" violent sectarianism in Iraq with their actions and programs, particularly with de-Ba’athification and the demobilization of the Iraqi army.

The harsh de-Ba’athification program, in which members of Saddam Hussein's ruling Ba'ath Party were fired from the government and banned from future positions, "had a significant and lasting negative impact on Iraq," and was greatly "damaging to Iraq’s post‑invasion recovery and political stability," the report says.

The war also allowed "Al Qaida space in which to operate and unsecured borders across which its members might move," the inquiry adds.

In March 2003, in the House of Commons, Prime Minister Blair insisted that the possibility of extremist groups getting their hands on WMDs was "a real and present danger to Britain and its national security."

Before he made these remarks, Chilcot made clear, "Blair had been warned, however, that military action would increase the threat from Al Qaida to the UK and to UK interests."

"He had also been warned that an invasion might lead to Iraq’s weapons and capabilities being transferred into the hands of terrorists."

The report emphasizes that the U.K.'s Joint Intelligence Committee, or JIC, had concluded in October 2002 that "the greatest terrorist threat in the event of military action against Iraq will come from Al Qaida and other Islamic extremists."

Iraqi civilians paid the biggest price for the war, which the report makes clear was sold on faulty intelligence.

From 2003 to July 2009, the inquiry found, the U.S.-led war resulted in the deaths of at least 150,000 Iraqis, most of whom were civilians — "and probably many more," Chilcot added. It estimates that another 1 million Iraqis were displaced.

A 2015 study authored by the Nobel Prize-winning medical organization International Physicians for the Prevention of Nuclear War concluded that more than 1 million Iraqis died because of the war, “And this is only a conservative estimate.”

"The people of Iraq have suffered greatly," Chilcot said.

By the end of March 2004, one year into the occupation, "more than 200 attacks targeting Iraqi citizens were being reported each week," the report notes.

"The significant worsening of security, coupled with revelations of abuse by members of the US military of Iraqi detainees held in Abu Ghraib prison, led many of the Inquiry’s witnesses to conclude that the spring of 2004 had been a turning point," it adds.

Despite the rapid increase in violence, the British government did little to document, not to mention stop, the escalating civilian casualties. In fact, it put more energy into quibbling about responsibilities than carrying out those responsibilities.

"The Government’s consideration of the issue of Iraqi civilian casualties was driven by its concern to rebut accusations that Coalition Forces were responsible for the deaths of large numbers of civilians," the report says.

It concludes, "greater efforts should have been made in the post-conflict period to determine the number of civilian casualties and the broader effects of military operations on civilians."

"More time was devoted to the question of which department should have responsibility for the issue of civilian casualties than it was to efforts to determine the actual number," the report underscores.

The Chilcot report details how British policy in Iraq was not just disastrous; it was also plagued by sheer incompetence.

"The UK did not achieve its objectives," the report states clearly.

"The Government was unprepared for the role in which the UK found itself from April 2003," it adds. "Much of what went wrong stemmed from that lack of preparation."

It cites a 2008 report by Transparency International, which found U.S.-occupied Iraq to be the world's third-most corrupt country.

Internally within the government, negative reports were covered up, the inquiry found. On numerous occasions, British politicians visiting Iraq — including the prime minister, the foreign secretary and the chief of the general staff — "found the situation on the ground to be much worse than had been reported to them."

"When the UK acceded to the US request that it assume leadership of a military Area of Responsibility encompassing four provinces in southern Iraq, it did so without a robust analysis either of the strategic implications for the UK or of the military’s capacity to support the UK’s potential obligations in the region," the report says.

Chilcot noted that, by 2007, militias had come to dominate the major southern Iraqi city Basra, to such a degree that British military commanders were unable to challenge them. Because of this, the U.K. had to make what Chilcot called a "humiliating" agreement with a militia that had been actively targeting British forces.

As was made clear when the investigation began seven years ago, the report does not make any legal decisions.

In his public statement, Chilcot noted that the "Inquiry has not expressed a view on whether military action was legal," adding that this could only be decided by a court.

The report does, however, state clearly, "The circumstances in which it was ultimately decided that there was a legal basis for UK participation were far from satisfactory."

It furthermore indicates that there "were also concerns over both the continued legal basis for operations in the  No‑Fly Zones (NFZs) and the conduct of individual operations."

The inquiry criticizes the British relationship with the U.S. as well.

After the 2003 invasion, the U.S. and U.K. became joint occupying powers in Iraq. In the following year, the U.S.-led Coalition Provisional Authority took the place of Iraq's toppled government.

"The UK was fully implicated in the Authority’s decisions, but struggled to have a decisive effect on its policies," Chilcot stressed in his public statement.

This is echoed in the report, which notes, "The US and UK are close allies, but the relationship between the two is unequal."

The report calls for independent scrutiny of government intelligence that is used to support future policy decisions.

It explains that ambiguous government language obfuscated facts. "Constant use of the term 'weapons of mass destruction' without further clarification," for instance, "obscured the differences between the potential impact of nuclear, biological and chemical weapons."

Trumped-up claims based on faulty intelligence has led to widespread mistrust of government institutions, the report notes.

Prime Minister Blair's insistence that his administration had evidence on Iraq’s capabilities and intentions, the report says, "has produced a damaging legacy, including undermining trust and confidence in Government statements, particularly those which rely on intelligence which cannot be independently verified."