The disturbing data on Republicans and racism: Trump backers are the most bigoted within the GOP 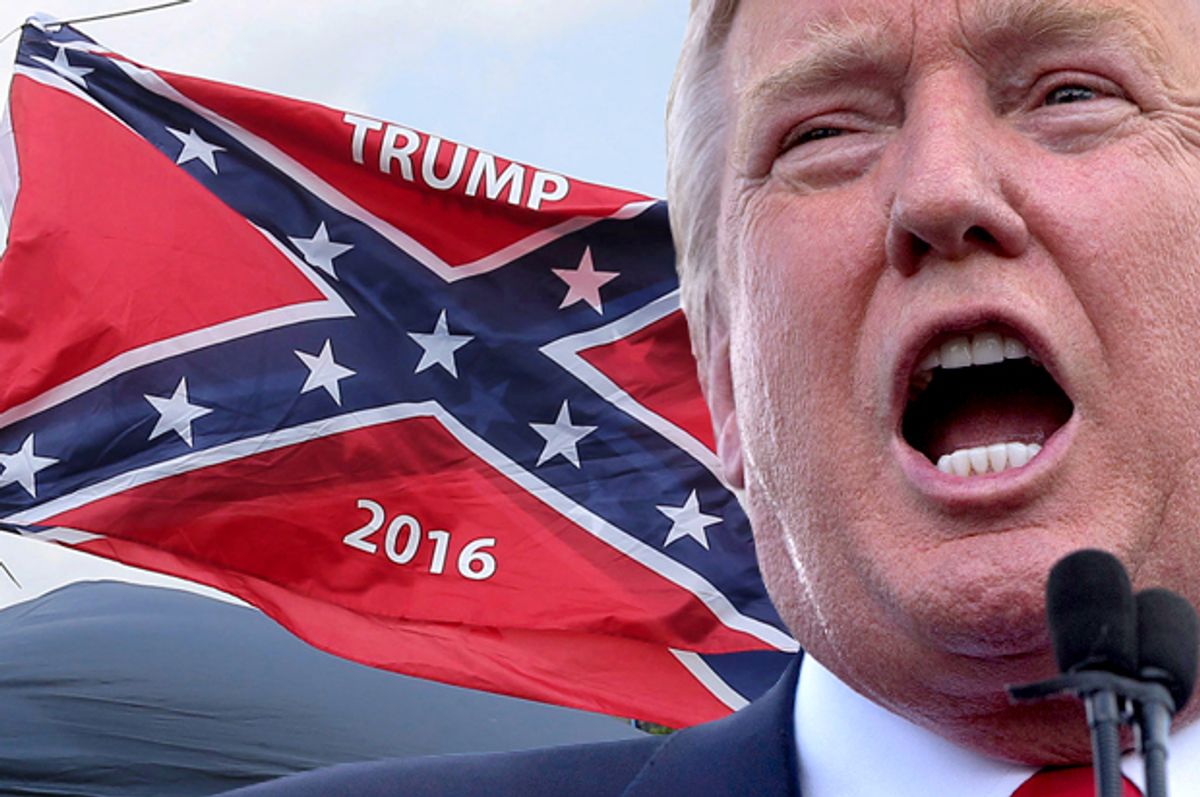 Presumptive 2016 Republican presidential candidate Donald Trump is a bigot. He wants to ban Muslims from entering the United States, believes that Hispanic and Latino immigrants come to America in order to rape and kill white women, uses anti-Semitic imagery to slur Hillary Clinton, and has been endorsed by white supremacists.

At present, the Republican Party is the United States’ largest white identity organization. There is a mountain of evidence in support of this claim. The Republican Party nurtures and cultivates hostility towards non-whites among its voters for the purpose of electoral gain. What is known as “The Southern Strategy” of racist “coded appeals” against African-Americans and other people of color has dominated Republican politics since (at least) the end of the civil rights movement. And during the Age of Obama, American politics has been poisoned by racist conspiracy theories such as “Birtherism," lies that Barack Obama is a type of Manchurian candidate who actually hates America and wants to destroy it from within, efforts to rollback the won in blood gains of the Black Freedom Struggle, as well as unprecedented efforts by the Republican Party to abandon its basic responsibilities of governance in order to delegitimize the country’s first black president.

Donald Trump is not an outlier or aberration. In many ways, he perfectly embodies the racist attitudes and beliefs of the Republican Party in the post civil rights era. Likewise, Donald Trump’s supporters have enthusiastically embraced the Republican Party’s racism towards people of color, in general, and against black Americans, in particular.

As reported by a recent Reuters/Ipsos public opinion poll, Donald Trump supporters possess extreme levels — even as compared to other Republicans — of antipathy towards African-Americans:

Supporters of U.S. presidential candidate Donald Trump are more likely to describe African Americans as "criminal," "unintelligent," "lazy" and "violent" than voters who backed some Republican rivals in the primaries or who support Democratic contender Hillary Clinton, according to a Reuters/Ipsos opinion poll.

Ahead of the Nov. 8 election to replace Barack Obama, the first black U.S. president, the poll also showed significant numbers of Americans in both the Republican and Democratic parties view blacks more negatively than whites, harbor anxiety about living in diverse neighborhoods and are concerned that affirmative action policies discriminate against whites.

Republicans in the survey expressed these concerns to a greater degree than Democrats, with Trump supporters presenting the most critical views of blacks.

The poll, conducted between March and June, interviewed 16,000 Americans and included 21 questions on attitudes about race. It sought responses from voters who support Trump, the presumptive Republican nominee, Clinton, the presumptive Democratic nominee, and her rival U.S. Senator Bernie Sanders. It also surveyed supporters of U.S. Senator Ted Cruz and Ohio Governor John Kasich, the last two Republican candidates to drop out of the race…

To be sure, not all Trump supporters expressed negative attitudes about blacks. No more than 50 percent of his supporters rated blacks negatively, relative to whites, on any of the six character traits in the poll.

Yet when their answers to the poll questions were compared with responses from supporters of other candidates, Trump supporters were always more critical of blacks on personality traits, analysis of the results showed.

The trend was consistent in the data, even when the results were filtered to include only white respondents to remove any impact that a different racial mix between Clinton and Trump supporters might play in the poll.

These findings are not surprising. They are but one more example of how the Republican Party and its voters have shifted farther to the right in the post civil rights era, as well as the deep connections between political polarization and white racism.

For example, recent research by Michael Tesler has shown how “old fashioned racism”, what was once thought to be all but vanquished from American society, is resurgent among white voters in the Age of Obama. David Sears has also demonstrated how “modern racism” now predicts party identification for Republican voters in former Confederacy. Other researchers have shown that the Republican Party’s ostensibly “race neutral” talking points about “small government” and “personal responsibility” are in fact signals to white racial resentment.

In many ways, Donald Trump’s voters are the 2008 and 2012 Tea Party faction rebooted for the 2016 presidential election. Like the John Birch Society of the 1950s and 1960s, the Tea Party maintained its influence over the Republican Party while remaining under the radar of the so-called “liberal” corporate news media. As social scientists Christopher Parker, Eric Knowles, and others have extensively documented, Tea Party supporters possess high levels of racial hostility and antipathy towards people of color.

The finding by Reuters and Ipsos that “Nearly one-third of Clinton supporters described blacks as more "violent" and "criminal" than whites, and one-quarter described them as more "lazy" than whites” should also not be a surprise.

Political attitudes, values, and beliefs are often contradictory. While racial attitudes are often cited as an exception to this pattern (they are remarkably stable and consistent), the non-ideological nature of many voters in the American electorate can still help to explain why some Democrats may believe pernicious and ugly stereotypes about black people as a group, but still vote for Barack Obama, the individual.

In all, white supremacy is a feature of American society from before the Founding and through to the Age of Obama. Racism and white supremacy are a type of “changing same” in American life, culture, and politics. The election of a black man (twice) as President of the United States is a type of symbolic progress. However, what was in 2008 a heretofore unprecedented event, by itself, does little to correct the impact of centuries of interpersonal and institutional racism against people of color.

Ultimately, the new Reuters/Ipsos poll is a reminder that not all Republicans are racist. However, racists are more likely to be Republicans…and the most extreme among them are Donald Trump supporters.