There's no cleaning this up: Paul Ryan refuses to break his deal with the devil 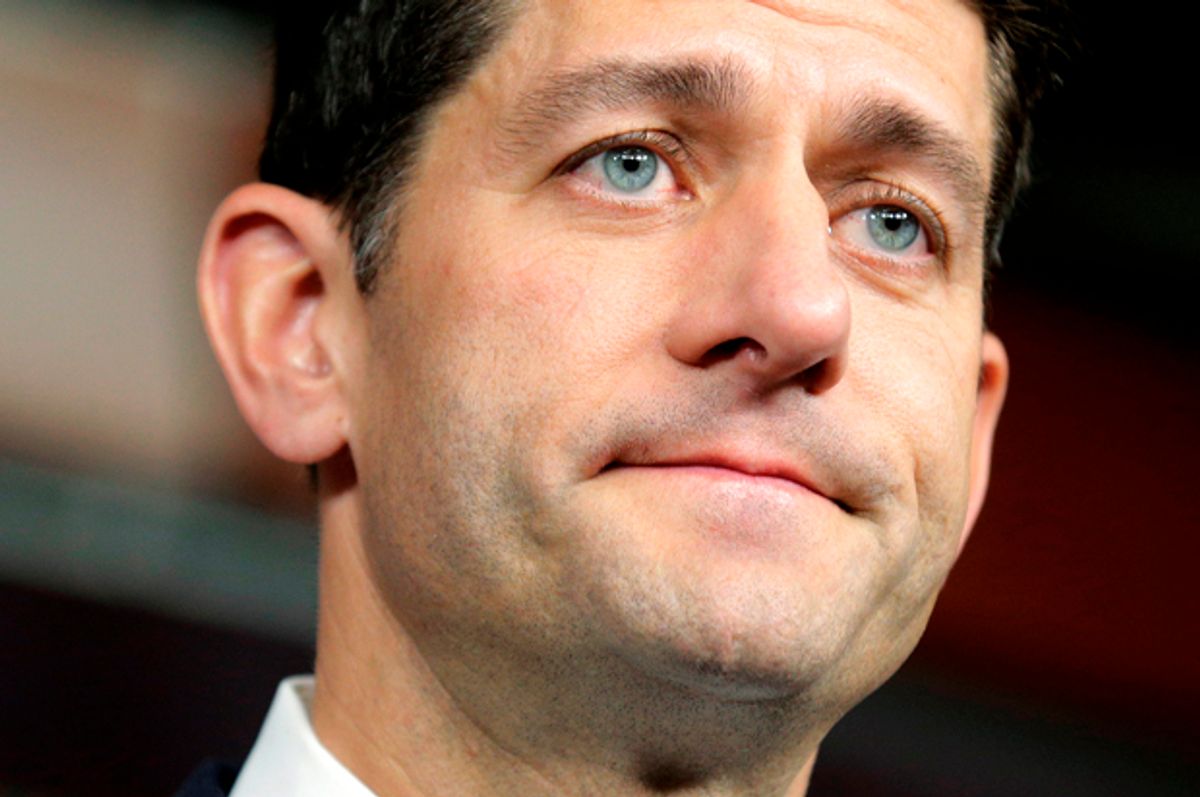 One of the great political mysteries of this age is how Paul Ryan convinced so many people that he is a simple policy wonk and not an ideologically rigid partisan hack who would sell out his party’s future electoral viability for a chance at recreating the world Ayn Rand imagined for “Atlas Shrugged.”

Yet here we are, with Ryan having granted Trump his seal of approval a month ago, only to spend what must feel like most of his time since then criticizing the nominee’s high-profile utterances that keep creating media firestorms. It’s like a high-stakes game of Racist Whack-A-Mole, and the fact that Ryan keeps playing it instead of, say, rescinding his endorsement no matter how bad Trump gets, says as much about him as it does about his candidate.

Ryan took a month to endorse Donald Trump after the racist tangelo clinched the Republican presidential nomination, a pause that might have allowed observers to believe the Speaker of the House was genuinely wrestling with his conscience. Be a good party soldier and endorse a candidate who represents the darkest, basest desires of xenophobia that the country usually pretends have nothing to do with electoral politics? Or stand up for the principle that the country should not be led by an overt white supremacist, even if it means repudiating the man your party’s base wants to represent it on the ballot in November?

In the end, Ryan took the inevitable path for someone who wants to keep his job, no matter the deal he had to make with the devil. Which is to say, he endorsed Trump, saying, “I feel confident he would help us turn the ideas in this agenda into laws to help improve people's lives.”

In other words, Trump’s blatant racism is subordinate to Ryan’s desire to enact his long-dreamed-of Randian legislative agenda of massive tax cuts for the wealthy and slashing the social safety net so deeply it will barely exist. He’ll also need Republican control of the Senate to start this slicing and dicing, but that is a strong possibility in 2018 even if the Democrats grab the majority this year, since the midterm map has Dems defending many more Senate seats. Since the House is likely to stay majority-Republican until at least 2020, Ryan just needs to hold on for two years to have his shot at getting his dream legislation through both congressional chambers.

As for Ryan’s calculation on Trump in 2016, a Republican in the Oval Office who will be enough of a political naïf that he can probably be cajoled into signing just about any deal the House sends him beats Hillary Clinton, even if the nomination of that person might accelerate the party’s current careening into oblivion by irreparably splitting it in half. Ryan is thinking short-term, putting in place the pieces he needs to pass his radical domestic agenda, at the expense of the health and stability of American democracy or the nation’s standing with the rest of the world.

For Ryan’s endorsement to make him look like anything other than a partisan hack, Trump had to really “pivot” to the general election and become a more disciplined candidate. Instead, he has made one obnoxious, out-of-bounds statement after the other.

Just days after Ryan’s endorsement, for example, Trump went after Gonzalo Curiel, the judge overseeing a lawsuit against him, suggesting that Curiel’s “Mexican heritage” rendered his impartiality suspect. Ryan disavowed Trump’s statements, calling them “the textbook definition of a racist comment.”

Just a few days later, in the wake of the Pulse nightclub massacre in Orlando, Trump publicly brought back his primary-campaign idea of banning all Muslims from entering America, on the theory that anyone of them could be a sleeper ISIS agent or something. Once again, Ryan found himself at odds with the candidate he had just endorsed over a blatantly xenophobic, racist policy, and suggested the House would sue a President Trump who tried to put such a policy in place.

He still didn’t take back his initial endorsement, though, perhaps still holding out hope that Trump will put the crazy talk on ice until after the election.

Then over the weekend, Trump created another controversy by tweeting out an ad with blatantly anti-Semitic imagery, reinforcing his campaign’s comfort with the support it is receiving from America’s white supremacists. Here was yet another opportunity for Paul Ryan to take a moral stand.

Instead, the Speaker of the House used some fairly milquetoast language, telling Wisconsin radio host Charlie Sykes that a candidate should know that “anti-Semitic images have no place in a presidential campaign,” adding that Trump needs to “clean this up.”

It is that last comment that should clue in anyone who still thinks Paul Ryan might get just how genuinely serious it is that his party’s presidential nominee is an unrepentant racist. “Cleaning this up” makes it sound as if Trump just needs to change his social media policies, maybe fire the employee who took responsibility for the tweet, even though the campaign has previously said that Trump handles most of his own tweeting. It makes it sound as if Trump’s constant playing to white supremacists (who, incidentally, loved the tweet) is a fixable flaw, and not the gestalt underlying his entire campaign.

The GOP presidential candidate is both a blatant racist and anti-Semite, or too dumb to recognize one. There is no cleaning that up. It’s who he is. How long Paul Ryan can go on pretending or hoping otherwise remains to be seen, but right now it looks as if the answer is: All the way to November and beyond, if that’s what it takes.