NRA's offensive hypocrisy: When will the organization demand justice for black gun owners shot by police?

Alton Sterling and Philando Castile were shot while carrying guns, but the NRA isn't stepping up to defend them 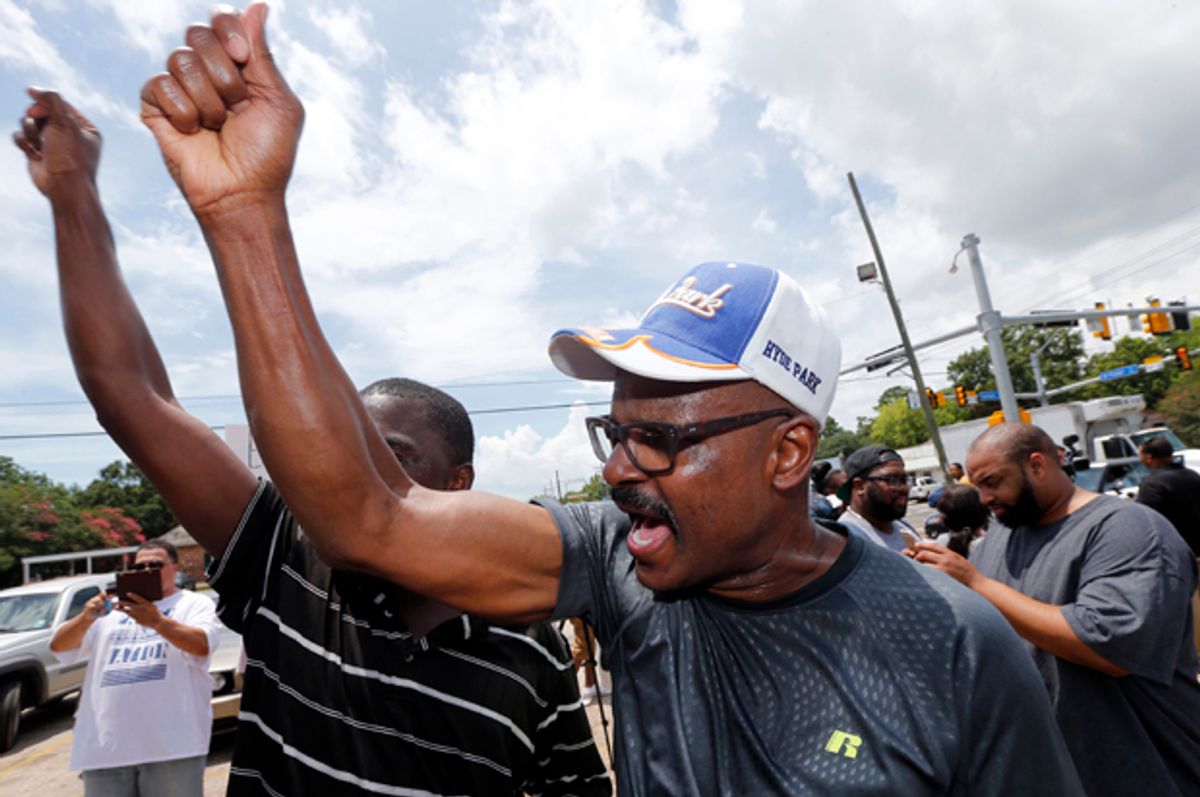 Right in the midst of a national outrage over  a video of police in Louisiana shooting Alton Sterling while holding him on the ground, yet another video of a police shooting of a black man has come out.

This video, filmed in Falcon Heights, Minnesota, shows a man named Philando Castile writhing in pain with blood splattered all over his car while his girlfriend says that a police officer shot Castile after asking Castile, responding to requests for his license, reached for his wallet. Castile later died of his wounds.

Beyond being yet more videos of senseless violence by police against African-Americans, what these two videos have in common is the police in question excuse their actions by citing the presence of a gun.

In the Minnesota video, the woman tells the camera that Castile informed the office that he had a licensed gun on him before he reached for his wallet. The officer then returns, arguing, "I told him not to reach for it. I told him to get his hand out."

In the Louisiana video, officers can be heard yelling, "He’s got a gun!"

In both cases, there seems to be no question that the shooting victims were armed. It's a point that's already being flogged by conservatives in an effort to excuse these officers.

However, and conservatives should be the first to remember this, guns are legal in this country.

Guns are legal in this country. Louisiana is an open carry state. Minnesota allows concealed carry. Police officers in these states know full well that people have a legal right to carry. They have, according to conservatives themselves, no reason to believe that a man with a gun is a bad guy. Why, he could very well be one of those good guys with a gun, at the ready to stop crime, that we keep hearing about from conservatives.

Which brings up a critical question: Where is the gun rights lobby?

Here are two American citizens that were killed while doing what the NRA claims is a constitutional right. Surely this must be a gross injustice in the eyes of the NRA! Surely they will be demanding action, petitioning congressmen, demanding the Department of Justice to step forward and make sure that every American has a right to arm themselves without fear of being gunned down by the police! Right?

But while progressive Twitter is all about protesting these deaths, if you go to the NRA Twitter feed, this is what you'll find: Whining about Matt Damon's gun opinions. Harping on some impolitic words from a community college professor. Putting up some free advertising for Remington.

But when it comes to the deaths of these two Americans who appear to be killed while exercising their legal right to carry guns? Crickets.

What you do get, however, is some overt race-baiting from the NRA, tweets that unsubtly try to imply to their largely white audience that they are in danger of being victimized, mostly by people of color, and that they need to arm themselves in response.

(The two men in this screen grab, by the way, have nothing to do with the crime and just happened to be standing there while the news crew was filming.)

(Quote from the news story: "Everything seemed normal until he saw a guy with a wallet in his hands trying to run past the restaurant. 'He couldn’t run though; his pants were sagging too far,' Caddy said.")

The NRA bills itself as a guns rights lobby. But whoever runs their Twitter feed is more interested in chronicling stories about muggers, pickpockets, and teenage gang wars than they are these two national stories about cops killing people who were exercising the right that the NRA claims they exist to protect.

Any true rights organization would be up in arms about these deaths, but the NRA can't even be bothered to take a break in the "scary muggers so buy guns!" drumbeat to make even a peep of protest.

While not all gun owners are racist (obviously), a growing body of research suggests that hostility to gun control is less about belief that guns are a "right" and more about white paranoia about people of color and crime.

Last year, social scientists Alexandra Filindra and Noah J. Kaplan published a study in the journal Political Behavior that found that showing pictures of black people to white people reduced white support for gun control. The effect was much stronger in white people who held higher levels of racial prejudice.

"Juxtapositions of 'law abiding citizens' and 'criminals' [are] evocative of racialized themes as crime has long been associated with blacks in the white mind," the researchers wrote.

Gun ownership is a way of "expressing my 'more-equal-than-others' status in a society where egalitarianism is the norm," Filindra told the Washington Post.

This confirms previous research, published in PLoS One in 2013 that found that the more racist a white person is, the likelier he is to own a gun.

It's time to admit the NRA is not a "gun rights" organization. The NRA — and their allies in the Republican party — are about one thing and one thing only: Stoking racialized fears of crime amongst paranoid white people for political gain and gun profits. The inability to give two hoots about the police killings of two gun owners, who happen to be black, just confirms it.