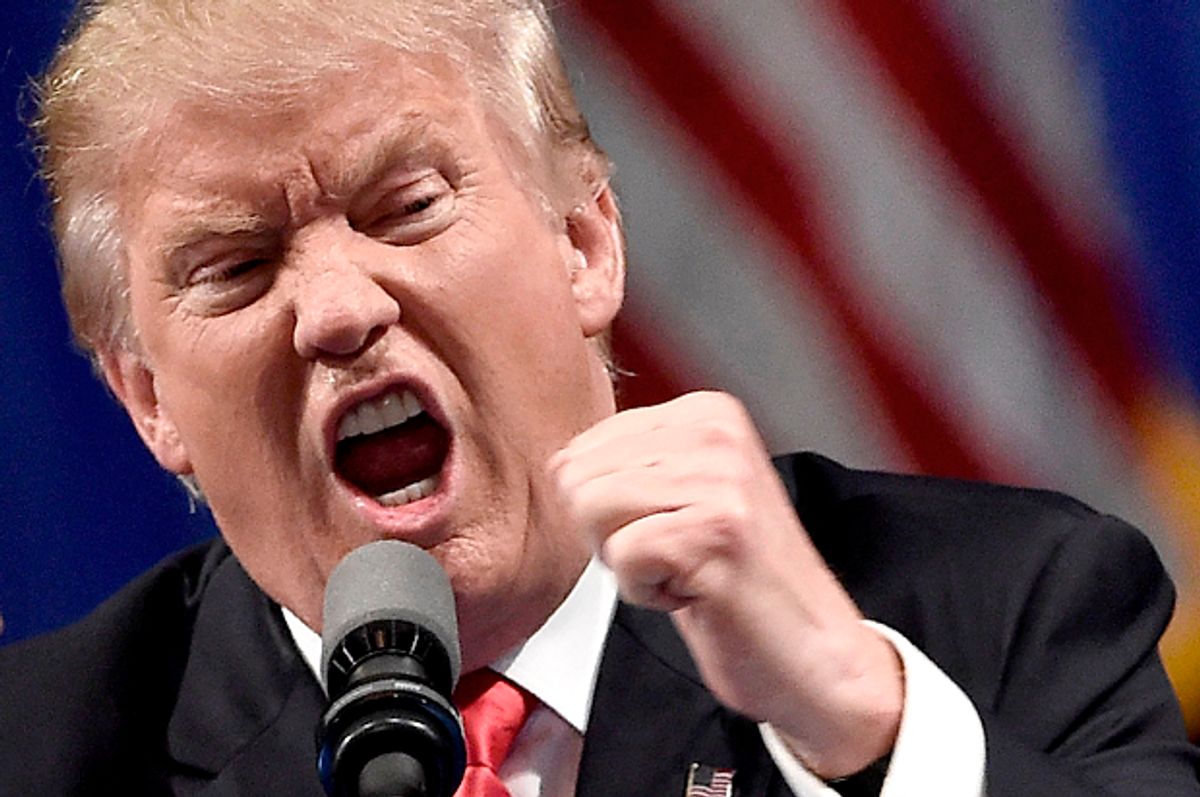 In a recently published essay, a noted professor of American History at Columbia University investigates the rise of Donald Trump and his highly paranoid approach to politics, along with the long history of similarly paranoid political and social movements in the United States:

“American politics has often been an arena for angry minds,” writes the professor. “In recent years we have seen angry minds at work mainly among extreme right-wingers, who have now demonstrated in the Trump movement how much political leverage can be got out of the animosities and passions of a small minority. But behind this I believe there is a style of mind that is far from new and that is not necessarily right-wing. I call it the paranoid style simply because no other word adequately evokes the sense of heated exaggeration, suspiciousness, and conspiratorial fantasy that I have in mind.”

Some readers may have already worked out that this essay was not published recently, nor was the author describing the Trump movement. “The Paranoid Style in American Politics” was written by the renowned historian Richard Hofstadter in 1964 — shortly after Donald Trump had graduated High School — and the Columbia professor was in fact describing the Barry Goldwater movement in the passage above (indeed, the essay was published in November, the month of the 1964 presidential election).

Since Hofstadter wrote this seminal essay, it has been frequently revisited by political commentators and historians to compare and contrast contemporary and historical political movements that are prone to what he calls the “paranoid style” — but it seems especially pertinent in 2016, the year of Donald Trump. Although the paranoid style is always with us, it tends to wax and wane in relevance, lapsing into long periods of obscurity on the fringes of the political spectrum (left and right) and coming back when least expected.

When Hofstadter wrote his essay, it was a particularly paranoid time for America; in the midst of the Cold War and the Civil Rights movement and just one year removed from the assassination of John F. Kennedy. Barry Goldwater was warning of the communist’s indoctrinating American schoolchildren while the John Birch Society’s founder Robert Welch was claiming that President Eisenhower was a “conscious agent of the communist conspiracy.” The previous decade had also seen the rise and fall of McCarthyism, which was likely fresh in the mind of Hofstadter, who had been a member of the Young Communist League in his youth.

Of course, there were numerous movements that had employed the paranoid style long before the Cold War. Hofstadter continues:

“In the history of the United States one [finds the paranoid style]... in the anti-Masonic movement, the nativist and anti-Catholic movement, in certain spokesmen of abolitionism who regarded the United States as being in the grip of a slaveholders’ conspiracy, in many alarmists about the Mormons, in some Greenback and Populist writers who constructed a great conspiracy of international bankers, in the exposure of a munitions makers’ conspiracy of World War I, in the popular left-wing press, in the contemporary American right wing, and on both sides of the race controversy today, among White Citizens’ Councils and Black Muslims.”

Today, the global communist threat is long gone; but the paranoid style is timeless. Since getting involved in politics several years ago, Trump has taken the same paranoid and overwrought approach as leaders of the aforementioned movements. Most notoriously the billionaire celebrity gave credence to ridiculous conspiracy theories about President Obama that are found on fringe right-wing blogs like Infowars.com.

Just as Eisenhower was an agent of the communist conspiracy, Obama is a Kenyan Muslim who sympathizes with radical Islamists. And this is hardly the only conspiracy theory that Trump has sold to a credulous public. The Republican nominee has claimed global warming is a myth created by the Chinese, implied that Obama never attended Columbia University, entertained the idea that the late Justice Scalia was murdered, declared that thousands of Muslim-Americans were cheering in New Jersey on 9/11, asserted that the Mexican government deliberately sends “the bad ones” to America (i.e. Rapists and criminals) — it goes on and on. (Though Trump hasn’t personally promoted the “white genocide” conspiracy theory — which posits that the white race is being deliberately wiped out through cultural assimilation — his most ardent supporters on social media come from within this community).

With Trump, there is always a plot, and every conceivable problem — whether it be social, economic, political — can be traced back to a cunning and calculated group of conspirators who want to destroy America and its culture. Paramount to the paranoid style are its enemies. And today, it is no longer the communists or the Catholics, but the Muslims, the Mexicans, the Chinese, the PC liberal media, and so on. Trump has single-handily restored the paranoid style to the mainstream (on the right, at least); giving credibility to wacky conspiracy theories from the bowels of the blogosphere and creating an angry and fanatical movement that will permeate American politics for the years to come.

(Some will correctly point out that the paranoid style has been making a steady comeback since the election of President Obama, as demonstrated by the Tea Party movement and figures like Glenn Beck, who embraced bizarre conspiracy theories as well; but Trump is the culmination of this revival — the pinnacle of paranoid politics and American idiocy).

As with all paranoid style politicians, Trump is a demagogue and a charlatan; he lies incessantly (even when he’s not peddling conspiracy theories) and exploits the worst prejudices and impulses of the populace. Though still unlikely to win in November, Trump has brought to the mainstream a kind of politics that will undoubtedly dumb down the already vapid discourse in America; and if it isn’t curbed by the ever-shrinking moderate and conservative factions in the GOP, it could also end up mainstreaming authoritarianism.