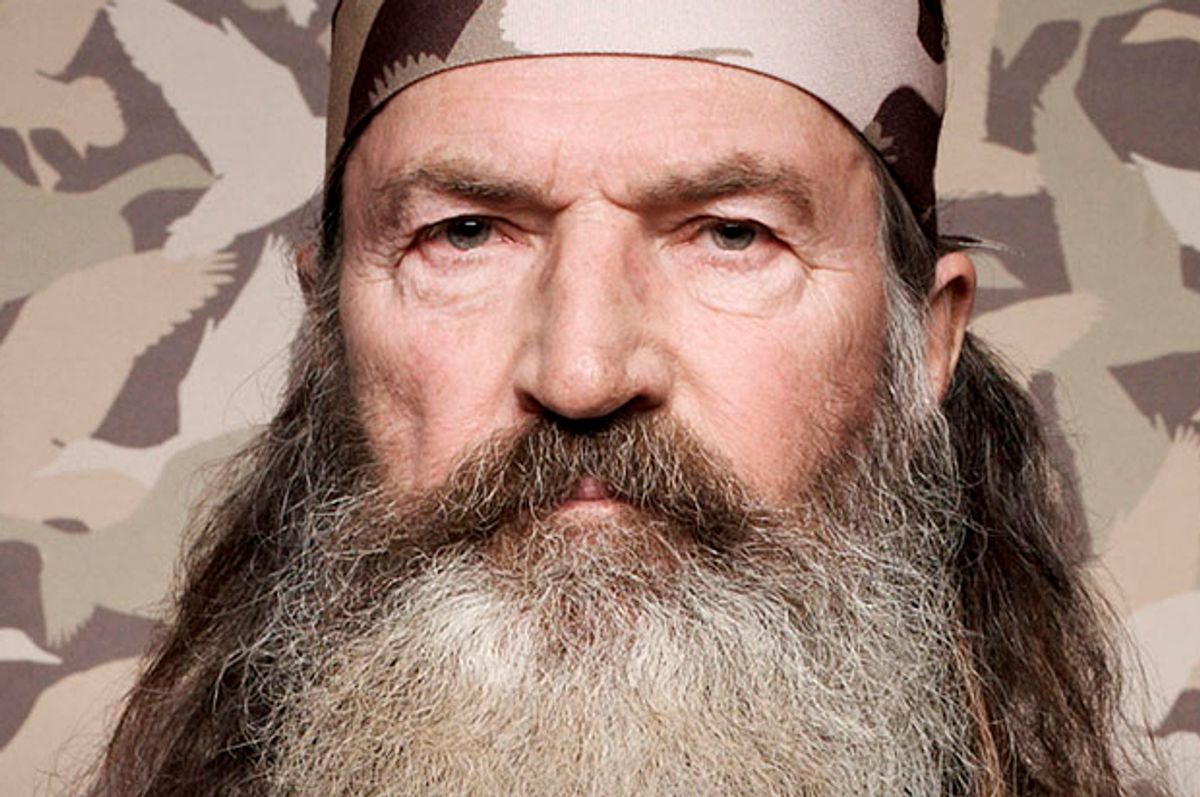 That’s the question of the day after Robertson, the family patriarch who stars on the channel’s “Duck Dynasty” program, is raising eyebrows yet again for his virulently anti-gay views. Robertson was a keynote speaker at last weekend’s Western Conservative Summit, an annual GOP conference held in Denver. As LGBTQ Nation reported, the self-described “Bible-thumper” likened the LGBT community to murderers in his speech, responsible for the death of thousands of innocent Americans.

“How many did we lose in Iraq and Afghanistan—with all that firepower?” he asks. “Six or seven thousand. Guess how many were murdered on streets of America during the same time frame? About 160,000. … Sounds like we’ve got a bigger war going on here than over there.”

Robertson claimed that high death rate, which has actually decreased in recent years, is the fault of LGBT people. “When you allow men to determine what's right and what's wrong, you get decisions like the five judges who said, ‘I may not know we have 7,000 years of history of men marrying women,” Robertson continued. “A male and a female. For that reason, they'll leave their father and mother and cleave to one another and become one flesh. I know it's been that way for 7,000 years, but we know best for what's everybody.’”

A&E has yet to make a statement on his remarks, but the network isn’t likely to reprimand him. If you have to ask why, a memorable quote from Cameron Crowe’s “Vanilla Sky” is here to explain it to you: “What’s the answer to 99 out of 100 questions? Money.”

In a 2013 profile for GQ, Robertson first stirred up controversy by infamously comparing homosexuality to bestiality. “It seems like, to me, a vagina—as a man—would be more desirable than a man’s anus,” Robertson told the magazine. “That’s just me. I’m just thinking: There’s more there! She’s got more to offer. I mean, come on, dudes! You know what I’m saying? But hey, sin: It’s not logical, my man. It’s just not logical.”

Following enormous backlash from the LGBT community, A&E suspended Robertson “indefinitely,” but that decision didn’t last long. Just nine days after his punishment was announced, the network welcomed him back to the show in an abrupt about face.

“As a global media content company, A+E Networks' core values are centered around creativity, inclusion and mutual respect,” the company said in a statement, adding: “While Phil's comments made in the interview reflect his personal views based on his own beliefs and his own personal journey, he and his family have publicly stated they regret the ‘coarse language’ he used and the misinterpretation of his core beliefs based only on the article. He also made it clear he would ‘never incite or encourage hate.’”

That, however, isn’t true: Robertson’s remarks were highly reflective of his personal worldview, which is informed by a fundamentalist interpretation of Christianity. Since his initial remarks on the LGBT community went viral, Robertson has only gotten more extreme in recent years.

Just months after A&E claimed that he didn’t mean it, Robertson gave a speech at his local church, in which he liberally paraphrased from Corinthians in order to condemn LGBT people to hell. “Neither the sexually immoral, nor the idolators, nor adulterers, nor male prostitutes, nor homosexual offenders, nor thieves, nor greedy, nor drunkards, nor slanderers, nor swindlers will inherit the kingdom of God,” he said.

Robertson also claimed that contracting HIV is a punishment from God in a September 2014 interview with Tony Perkins, the head of the anti-gay Family Research Council.

“A clean guy—a disease-free guy and a disease-free woman—they marry and they keep their sex between the two of them,” the reality star told Perkins on his radio show. “They're not going to get chlamydia, and gonorrhea, and syphilis, and AIDS. It's safe. To me, either it's the wildest coincidence ever that horrible diseases follow immoral conduct, or, it's God saying, ‘There's a penalty for that kind of conduct.’” (He, of course, did not bring up his own history of adultery in the interview.)

In recent years, Robertson’s comments have turned increasingly violent. While stumping for Ted Cruz earlier this year, he said that politicians who support same-sex marriage should be wiped off the face of the planet. “It is nonsense,” Robertson told Cruz supporters at a February rally. “It is evil. It's wicked. It's sinful. … We have to run this bunch out of Washington, D.C. We have to rid the earth of them. Get them out of there.”

LGBT people aren’t the only community that should be upset that the anti-gay figure has been continually given a very public platform to spout vile hate speech.

One aspect of his 2013 interview with GQ that was widely overlooked were his extraordinarily backward views on racial equality. Robertson told the magazine that black people were better off in the Jim Crow-era South, before the days of welfare and affirmative action. “I never, with my eyes, saw the mistreatment of any black person,” he said. “Not once. … They’re singing and happy. I never heard one of them, one black person, say, ‘I tell you what: These doggone white people’—not a word!”

Robertson has also come out in support of child brides. During a 2009 speech at a “Sportsmen's Ministry” event, he told the crowd that the ideal age to find a wife is when she’s “15 or 16.”

“Duck Dynasty,” now in its tenth season, is in a very different place today than it was when Robertson first began his years-long tear of racist, sexist, and homophobic remarks. Once the most-watched reality program in cable history, viewership has declined in recent years. The show’s viewership peaked in August 2013 with 11.8 million viewers, but last year it averaged 3.44 million viewers, according to Nielsen. (Note: “Duck Dynasty” was still the 10th most-watched show on cable.)

Those numbers are modest compared to what the show used to be, but the reality program remains a cultural force to be reckoned with, particularly when it comes to retail and advertising. During its peak, it was more expensive to advertise on “Duck Dynasty” than “NCIS,” the biggest show on television. Variety reported that a 30-second spot on the long-running (and older-skewing) CBS program went for $154,025. On “Duck Dynasty,” similar airtime would cost $170,000 to $180,000.

In 2013, Bloomberg estimated that the show brought in over $80 million in ad revenue, while netting over $400 million dollars in merchandising during the calendar year alone.

Half of the show’s retail revenue comes from Walmart, as Forbes reported in 2013. On the big box chain’s website, you can buy everything from “Duck Dynasty” plush toys to duck whistles, wall art, bobbleheads, DVDs playing cards, t-shirts, hats, and even a fake beard designed to make you look like Phil Robertson himself. The truly devoted can also pick up “Duck the Halls,” the Robertson clan’s Christmas album, which features songs like “Hairy Christmas,” “Ragin’ Cajun Redneck Christmas,” and “Baby It’s Cold Outside.”

In 2013, few advertisers or brands spoke out against Robertson’s comments or threatened to discontinue their relationship with the show. “Across our client base, it didn’t really reach the level of a reason to remove advertising—at least, not yet,” one ad buyer told Variety. Without public pressure, A&E continued to make a killing off the Robertsons, but there’s signs that the boom times may be coming to an end. “Duck Commander: The Musical,” a stage spin-off of the reality program, was a major flop in Las Vegas, closing just a month after it opened.

But if “Duck Dynasty” isn’t quite the cash cow it used to be, there’s no reason for A&E to continue to support Robertson, especially during what is an extremely crucial moment for LGBT people.

The attacks on Pulse nightclub in Orlando last month showed how extraordinarily vulnerable the LGBT community is. On June 12, a lone shooter opened fire on the Florida gay bar, killing 49 people and injuring 53 more. Across the country, queer people are more likely than any other population to be the victim of a hate crime. Despite the fact that LGBT folks make up an estimated five percent of the population, we represent 21 percent of crimes motivated by identity-based hate.

Nonetheless, fundamentalist preachers have continued to suggest that LGBT people are deserving of being killed.

“There's no tragedy,” said Sacramento’s Pastor Roger Jimenez. “I wish the government would round them all up, put them up against a wall, put a firing squad in front of them and blow their brains out.” Another pastor in Fort Worth referred to the Pulse victims as “perverts and pedophiles” and “the scum of the earth.” Sentiments like these will only encourage future violence and the loss of more innocent lives, but sadly, they don’t sound all that different than Phil Robertson.

Robertson has continued to compare LGBT people to murderers in the wake of the most horrific mass shooting in U.S. history, a crime perpetrated against a community he and others like him have bashed for years. It’s time for A&E to take a long overdue stand against bigotry. When it comes to violent hate speech, the buck has to stop somewhere.